Skip to content
With discounts up to 20-40% in shop!
Learn about the different French knife cuts in gastronomical cuisine. From cube knife cuts to round cuts and more. 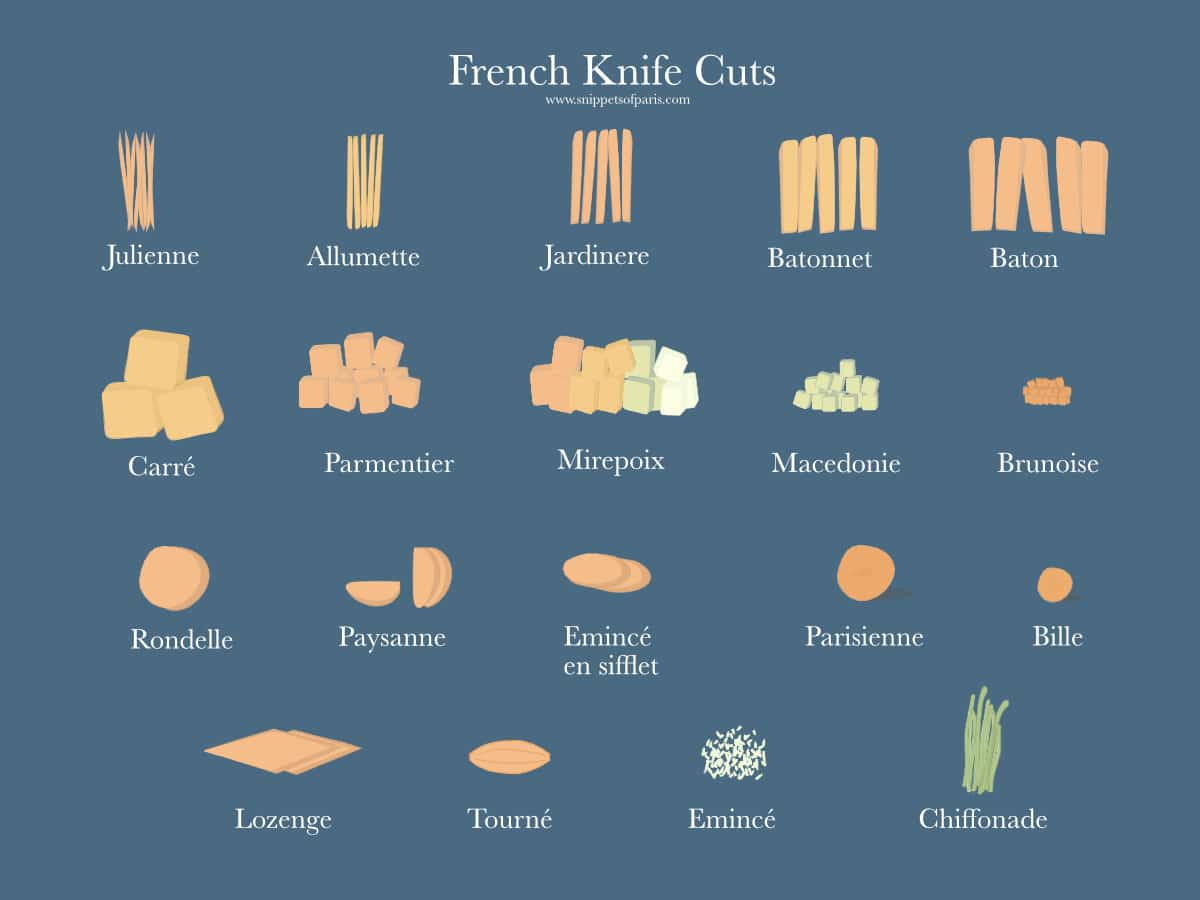 When is a knife more than just a knife? When it is used in French cuisine, bien sûr! From sizes large to small, it is not about the knife but how you use it to prepare that meal. (It might be about the knife, sharpness counts after all.)

If you are a home chef that is looking to take their cooking to the next level, you may be interested in the art of the different french knife cuts. There are several goals here, from balancing necessary cooking times to a beautiful presentation.

The French style of chopping and cutting is often associated with professional cooks and chefs. Young apprentice chefs in France train for 6 months or more just on having that perfect homogeneously cut vegetable or fruit to present to their bosses, the almighty Michelin-starred chef.

The use of the correct French cuts is to yield the cleanest and most elegant-looking slices possible. And that handy knife is your tool par excellence to demonstrate whether that young apprentice has become a confident cook sure of his/her technique and theatrical arrangement.

If you are a home cook, this might sound rather intimidating but it isn’t meant to be. Sometimes you just want to know the different French knife cut terminology in order to follow what the recipe you are looking at is asking for. Mirepoix, anyone?

I should note, most of the sizes are mentioned below in millimetres and centimeters as we do in France. American inches are unfortunately too large in size to use as a measure. So let’s get to the most common French knife cuts that are used today, shall we? Allons-y!

Allumette is the French word for “matchstick” as allume means to “light up”. The allumette knife cut is about matchstick size strips (in length and width) at around 3 mm width × 5 to 6 cm length.

A julienne is a type of French knife cut, where the vegetable is cut thinner than the allumette at 1 to 2 mm width × 5 cm length. Eg. Carrots julienne or oignons julienne.

The jardiniere which translates to “gardener”, is similar to the allumette but a bit larger. It is one of the French knife cuts that is a rough chop made in a hurry, and usually measures around 5mm width x 5cm length.

The baton, as the word baton might imply, is a thicker version of the jardiniere knife cut. A baton usually measures about 1.5cm width x 5 cm length.

For those Michelin-starred chefs who require the ultimate in precision, there is the batonnet. It’s size is between the julienne and the baton at around 1 cm width x 5 cm in length.

As an example, the surimi crab sticks are usually referred to in French as a batonnet, for the batonnet cut. The baton or batonnet are also great for vegetable crudité platters.

A mirepoix knife cut is where the vegetable is cut into small rough cubes about 1 to 1.5 cm in size. This is one of the French cube cuts, and is larger than the macedonie and brunoise which are compared below, but smaller than the carré.

Note, the mirepoix knife cut is usually used to cut vegetables for the French cooking technique that calls for making a mirepoix flavor base.

In a mirepoix base, a stock sauce is made by lightly cooking vegetables at low temperatures. The vegetables used are usually onions, celery, and carrots in butter or oil, and they are strained out of the resulting sauce. This mirepoix sauce is then used to flavor stews and other dishes. .

The mirepoix knife cut is a rough cut, as it doesn’t really matter how precisely the vegetables are cut, since they will be strained out anyway.

Carré means “square” in French, and it is sometimes also called a large dice. The carré is usually a cubed cut measuring 2 cm evenly all round, and is larger than the mirepoix.

It is named after Antoine-Augustin Parmentier, who was a pharmacist in the 18th century and nutritionist of his day. His many contributions to nutrition included the first mandatory smallpox vaccination campaign (under Napoleon Bonaparte in 1805, when he was Inspector-General of the Health Service in France) and the extraction of sugar from sugar beets.

He was also a vocal proponent of using potatoes as a food source for humankind, which was not the case before the 18th century. (Potatoes were banned in France at the time for causing leprosy).

The parmentier cut comes from bouquets of potatoes that he would prepare and serve to important guests like the American ambassador to France Benjamin Franklin. Antoine Parmentier would go on to have many dishes named after him in France.

Compared to the mirepoix and parmentier, the macedonie knife cut is a also a cube, but is smaller at around 4mm. Roughly, it would be the same size as a pea or a corn kernel.

Brunoise is a French knife cut, where the thin matchstick size vegetables in the julienne cut (above) are cut vertically into cubes as well. The brunoise is usually used as a garnish top of dishes like a salad or a stew.

Compared to macedonie and the parmentier, it is even smaller at around 2mm size cubes.

Moving away from the cubes, the rondelle is basically a round knife cut. Cylindrical vegetables like carrots or celery are cut into thin discs between  0.2 to 0.5 cm.

The paysanne knife is basically cutting a rondelle in half, to make thin half circles. To do this, cut the vegetable (usually a carrot) in half lengthwise, and then cut slice up to 1 cm thick.

Emincé en sifflet is similar to the rondelle, but involves slicing diagonally while cutting 2-3 mm slices by cutting with an inclination of 30-45° to obtain an oval-shaped slice.

The more the blade is tilted, the longer the cut washer will be elongated and oval.

The Parisienne is not technically a knife cut, but more of a scoop. It is about the size of a small ice cream scoop, that is used to make small round balls in vegetables like potatoes or fruit like melons or watermelons.

A bille is also a scoop and is smaller than the parisienne. It is also used for fruit like melons to add to a dessert or fruit salad.

A lozenge is a diamond-shaped cut that is often used for decoration in dishes.

A tourné is an inflated diamond-shape cut, almost like a rugby ball. It is not round however. A tourné should have 7 sides that must look homogeneous, and is a very technically challenging cut in French cuisine.

Emincé means to mince. This is a thin knife cut that can refer to vegetables like onions, and also meat dishes like emincé de poulet (chicken).

A chiffonade is another knife cut where large leafy vegetables or herbs are shredded into thin and long strips. It is also usually used as an elegant garnish when tossed on top of various dishes.

If you enjoyed this article, you may enjoy reading more about French cooking terms and techniques.