Skip to content
With discounts up to 20-40% in shop!
If you are interested in learning about French cuisine, get the basics of French cooking that will turn you into a masterchef in no time.
(As an Amazon affiliate, we may earn commissions for certain purchases. Please note, all information is provided for entertainment purposes only. See our disclosure policy for details.)

No matter where they are today, every French chef starts off learning the basics. It takes practice to master any skill, and cooking is no exception. So if you’ve never cooked a proper French meal before, you might be nervous about what to expect.

France is a country that is renowned for its rich culture around food, with French cuisine being well known for its 5 star cuisine and Michelin restaurant grading system.

But home-cooking in the French style doesn’t have to be complicated or difficult, as long as you keep in mind a few basic principles. I was entirely intimidated by the standards after moving here, but after 10 years (and watching several French cooking shows) I’ve found that it is not quite as scary as it seems.

And compared to many other cultures, it is also relatively healthy. While French food doesn’t skimp on the cream or butter, it does place an emphasis on fresh produce, quality ingredients, portion-size, and careful preparation.

From the cheesy wintery dishes of Alpes, to the garlic-infused dishes of Provence, there’s a world of recipe inspiration out there if you know where to look. But it all boils down to a few keys in preparation.

So if you’re starting out or even if you know your way around the kitchen, here are the top French cooking basics that will make you a hit in the kitchen. Allons-y!

You cannot claim to be an aficionado of French cuisine if you do not use high quality ingredients in your cooking. From fine cuts of meat at the butcher to the fresh seafood brought in from the sea, your cooking is only going to be as good as its ingredients.

While certain dishes like the boeuf bourguignon can make do with old cuts of meat slow-cooked for hours, a dish like the bouillabaisse is prepared directly based on the ingredients brought in from the fisherman on that day.

In France, there are different artisanal shops for different types of food such as: the butcher (boucherie), fish shop (poissonerie), cheese shop (fromagerie), bread (boulangerie), desserts (patisserie), etc. For special occasions like Christmas, the French are just as likely to spend on food as they are on gifts.

So if you are planning a big French meal, avoid cutting too many corners and go for quality.

Traditionally, French people used to head to the farmers’ market every day in order to see what vegetables are freshly picked and decide what to prepare based on that.

This is a bit less practical these days, with long working hours, but you will still see the same process at high-end and Michelin starred restaurants in France, you will see the Chef deciding the evening’s menu based on the availability of fresh produce.

To give you an idea, here are the vegetables by season that are popular in France:

Other vegetables like carrots, onions, garlic, and tomatoes are staples all year around. You can see more French pantry essentials here.

Within French cooking, there are many different ways to cut a piece of meat or to cut vegetables. If you manage to get into the famous Alain Ducasse’s Ecole de Cuisine (school of cuisine) in Paris, you will become an expert in the difference between cutting carrots in a:

Most home chefs don’t try to live up to that level of precision, but that doesn’t mean you shouldn’t keep a good set of knives on hand as you prepare your favorite French dish. You never know when you might need a chiffonade! You can read more about the top French knife cuts here.

French cuisine doesn’t hold back on butter. And I mean the real stuff, no fake margarine, etc. (The French secret to staying slim is to actually eat a small portion of the dish, instead of scrooging on the butter.)

French butter has a lighter percentage of fat (minimum 82%) in it than American butter (80%) and so tends to be softer and easier to cook with. It also sometimes comes with salt already in it, beurre à sel, which is simply amazing!

The secret of succeeding in anything is preparation. And it is a topic taken so seriously in French cuisine that there is a specific term for it: the mise en place. Mise en place literally translates to “put in place” and is the process of gathering and organizing all the ingredients before starting to cook.

It starts with reading the recipe and walking through process mentally. Then assemble all the ingredients in the required quantities, so that they are ready to go at the precise point in the cooking process. After all, you don’t want that lamb chop to overcook while you are trying to put together the sauce for it!

French history is filled with wars, revolutions, and hardships. Times were tough, and food scarce. Because of this, French culture and cuisine uses ingredients that other cultures would traditionally throw away, such as the innards, tongue, feet, etc.

Lyon, the long considered the capital of French gastronomy, is famous for its dishes prepared with organ meats (known as les abats or la triperie). Everything from beef and chicken guts, to livers to cheek jowels, is served as a French delicacy. The more adventurous will enjoy Paul Bocuse’s Michelin star restaurant and his famous stuffed chicken bladder dish.

You don’t have to go as far, but do consider that the ingredients that you usually throw away, may be used to add flavor to a bouillon or a sauce. In addition, many of the traditional charcuterie, sausages, pâtés, and terrines, make use of these innards.

Other popular French dishes like boudin noir involve a sausage made of blood. There is a reason escargot (snails) and cuisses de grenouilles (frog legs) are a delicacy.

A lot of French cuisine, and especially Provençale cuisine relies heavily on herbs like:

You will often see them on French websites written as a bouquet garni as shorthand in the recipe. The herbs are tied together with a string or put in a small sachet and put in the stew for cooking. The bouquet is removed before serving.

For instance all the stew recipes like chicken provençale  depend on some combination of herbs these herbs (although I usually write out the the spices to include in my recipes).

Freshly grated nutmeg is also featured in recipes like a gratin, along with a variety of stock cubes (chicken, beef, vegetable, etc.) to be used in stews.

You should also keep a mortar and pestle on hand in order to ground down the herbs and, most important of all, the garlic as necessary.

A lot of the traditional dishes in French cuisine are not meant to be prepared and cooked in less than 30 minutes (unless you are preparing one of these no-cook meals). The traditional coq au vin is meant to be cooked for over 3+ hours!

The Instant pot does come in quite handy these days, for those who no longer have the time to wait over a stove. And don’t assume that a French chef would scoff their nose at it. The tendance in France is for a product similar to the Instant Pot, but much more elaborate and expensive called the robot cuisieur (robot cook).

We all do what we can, in the amount of time available.

One of the basic rules of French cooking is to layer the flavors. You will often see dishes with the main ingredient on the top or on the side, with other ingredients and sauces arranged around to compliment.

The classic French onion soup is the perfect example of a traditional French dish. The onions are cooked for long time until they caramelize, and then the cheese topping prepared separately to add on top. The tastes meld together to give a lovely balance that is quite unexpected at first glance.

Something small like the lardon, adds that extra something to the meal, adding a bit of fat, without indulging.

In addition, meals should be build upon the palate, from the entrée (starter), to plat (main), and finally dessert. And don’t forget the wine!

This is why most French recipes include pairings of how to complement flavors, including suggestions for accompaniments, so that there isn’t one ingredient or dish that overwhelms the rest.

French food often includes a lot of sauces, served on the side to compliment the main ingredient. Some of the most common sauces to be served are:

Deglazing a pan to recuperate those lovely bits into a sauce, is another common cooking technique.

Even desserts often get a coulis (sauce made out of pureed fruit) in order to complement it. You can read more about French sauces here.

If you are a fan of spice, unfortunately I have some bad news. The notion among French chefs is that the spice overpowers the other ingredients, making it that you can’t taste the savor of the meat and vegetables that are actually the star.

As such, there is less of an emphasis on spices like paprika, ginger, or turmeric. A good salt like fleur de sel and a pepper grinder however, is a must.

One of the main points of exigence of French cuisine is the presentation. Arranging and placing the ingredients artfully around the plate is a skill that requires a bit of practice and pre-planning.

And along with the actual presentation of the dish, the art de la table is also important with attention being paid to the table setting, cutlery, etc.

So when I mentioned that French dishes are not usually spicy, that also means that French restaurants will not have a habitual bottle of tabasco or sriracha to add to the dish.

Dishes should usually be eaten as served, because it is assumed that the chef knows what he/she is doing. And that means proper dining etiquette indicates that you can’t douse a french dish in ketchup, unless it already came with it.

And finally, it is time to enjoy the meal! Eating should be a pleasurable process, to be savored with friends and family, and not gulped down mindlessly at your desk at work, or while watching tv.

Even at lunch, French workers are required legally to take at least 30 minutes lunch away from their desks. The art de vivre à la française is all about delighting in the succulence of that meal, and the juiciness and tenderness of the spread in front of you. So enjoy!

If you enjoyed that, check out our other classic French recipes that are easy to prepare. Bon appétit and à bientôt ! 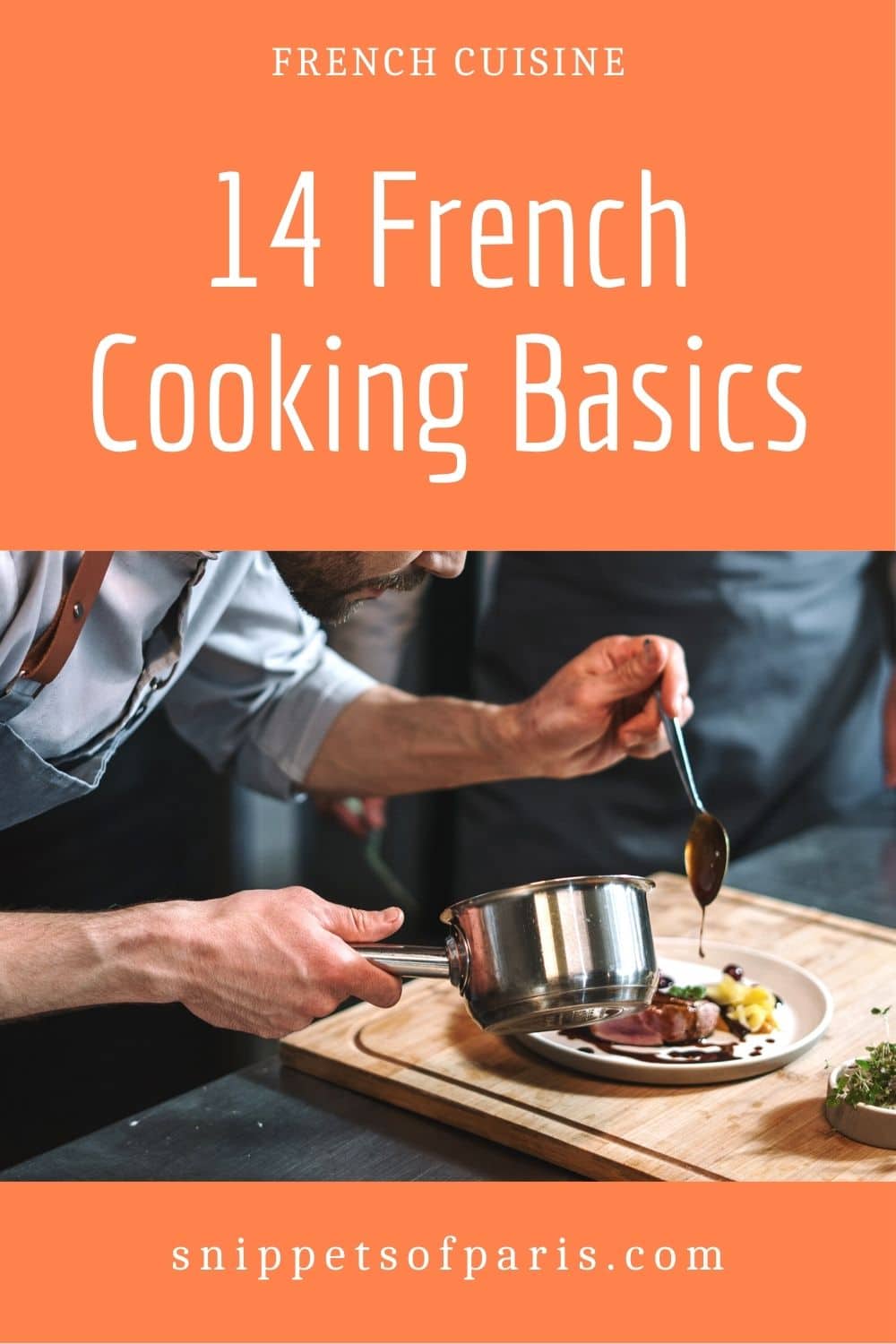