Skip to content
With discounts up to 20-40% in shop!
Whether or not you have a sweet tooth, you have to try these French delicacies. The best French desserts that you have to eat (or die trying).
(As an Amazon affiliate, we may earn commissions from qualifying purchases. Please see our disclosure policy.)

As the saying goes, “Paris is a moveable feast”, and that is certainly the case when it comes to desserts. And all over France for that matter. There are so many wonderful French desserts, that it is impossible to catalog them all.

But there are certain desserts that are “tried and true classics” in brasseries all across France. We try to cover them all (without putting on an extra 5kg!)

The Baba au Rhum is said to be invented by the same guy who invented French onion soup. Ex-Polish King Stanislas (whose daughter Marie happened to be married to French King Louis XV) was in exile in the Alsace-Lorraine region, when he decided to take their traditional gugelhupf cake and douse it in liquor.

With a dash of cream, fresh berries and rhum, this dessert is one for the ages.

If you have never had a crêpe before, you definitely have to plan to have one in Paris. Made from buckwheat flour for savory crêpes and regular flour for the sugary version, it is the French version of the pancake. Topped with strawberry syrup, nutella, ice cream, the choices are aplenty. Crêpes are specially served during the French celebration of Chandeleur, but there is no need to wait for it, you can serve it all year round.

You can even take it up a notch with a crepe suzette or a crêpe flambée au calvados, which is a crêpe doused in the calvados liquer and set ablaze.

Get the Crêpe Suzette recipe here.

Macarons might be as ubiquitous in North America today as the cookie is in France, but there’s still something to be said to having one freshly prepared at one of Paris’s finest patisseries.

Try ones at Pierre Hermé or Ladurée, but my favorite is Café Pouchkine near Place de la Madeleine.

Ice cream may sound a little boring, but this little family ice cream shop in the heart of Paris, has a passionate following. They have over 90 flavors of ice creams and sorbets, although only 30-40 are on the menu at any one time.

You can go directly to the glacier (ice cream shop) on Ile Saint Louis, or look out for the small brasseries and restaurants in the nearby Marais who a smaller selection.

The traditional sweet from Aix-en-Provence is not really a dessert, but I had to include it on this list, since it is unlike anything I have tasted before. It is more of a confiserie (candy) made from melon and almond paste and is very sweet.

You won’t find it on the menu of a Parisian restaurant, but rather in patisseries across France. They are catching on in popularity like the macaron however, so perhaps soon to come to a grocery store near you?

Flan might be a french word, but the flan you are thinking of is actually a crème caramel. A French flan has a crust and is usually served as a pie slice. (Not that a crème caramel is not great, but if that is what you are looking for, don’t be disappointed if you accidentally receive a flan instead!)

The french flan is not very sweet itself but is sometimes served with caramel or chantilly cream on top.

Get the French flan recipe here.

The fiadone is a corsican tarte made normally with brousse or ricotta cheese, grated coconut, a hint of lemon and vanilla. It is normally very light and fluffy and goes down well on a hot summer’s day, which is why you find it typically in the South of France.

Now, this is the French dessert you pick if you can’t decide which dessert to get. The café gourmand is a small cup of coffee served with 3 small-size desserts. You don’t get to pick the dessert, that will be the “surprise du chef” as we say in French, but the choices are usually pretty good.

The picture above is a panna cotta, crème brulée and a small piece of chocolate cake.

Note: The coffee that you will be served with a café gourmand is, by default, an espresso. For a larger cup of coffee or decaf, you can follow my article on ordering coffee in France (hint: there are a lot of possibilities!)

The grand classic of French desserts is of course the chocolate eclair. An oblong pastry, stuffed with cream and custard, and topped off with chocolate icing.

Forget the pastry filled with industrial sugar that you get in North America, and try one in Paris at one of the city’s famed patisseries like Ladurée and Angelina’s. I promise you it doesn’t taste the same.

An exquisitely complicated dessert to make, the mille feuille means 1000 layers, and is composed of layers of puff pastry and cream. It is sometimes also called the gâteaux Napoléon. The pastry is folded several times, which is why it is called mille feuille, and the butter cream filling then added to the layers and cooled overnight.

The clafoutis is similar to the French flan, but is made traditionally with black cherries. Like the flan, it is baked with a crust at the bottom, and sometimes served with whipped cream.

The name religiouse means “nun”, but there is nothing nun-like about this dessert. It is made with two choux pastry, one larger than the other and filled with crème. It can also be filled with chocolate or mocha cream. It is then usually covered on top with chocolate icing.

Tarte au citron, otherwise known as a lemon meringue pie, is another one of those classics that has travelled the pond. A pastry shell filled with lemon filling and topped with a smooth meringue cream, what could be better?

If you don’t like lemon, how about a tarte aux pommes? Topped with sliced apples, the tarte is a variation of the classic american apple pie and is usually flavored with nutmeg or cinammon.

A variation of tarte aux pommes is the Tarte Tatin where the apples are caramelized and a pastry covering is cooked on top.

The traditional meringue from Provence is hardish on the outside, and soft and airy on the inside. They coming in many flavors such as lemon or lavender, and are often topped with nuts.

If you enjoy raspberries, a light tartlette frambroise could be just what you are looking for. Often containing pistachios, you could almost eat the whole thing with one bite! (Almost.)

Nothing says summer like a classic French Frasier. A dessert filled with cream and strawberries, you could eat one every night and discover a different flavor or texture to it.

Riz au lait is one of those underrated desserts that most people overlook. It is basically a rice pudding, with subtle notes or fruit or cinnamon added to it. It is not as indulgent (in calories) as some of the other desserts on the list, but that is not to say it isn’t as delicious.

A mousse à la fraise (strawberry mousse) may seem like a rather plain dessert, but each patisserie chef will bring his own délicatesse to it.

If you don’t like strawberries, any other fruit such as berries, cherries, watermelon, cantaloupe, etc. will do nicely.

Eclairs don’t just have to be for chocolate you know. This sumptous looking thing is an Eclair au Café, or coffee eclair. The cream is made with coffee extract giving that rich coffee flavor, while filling in the classic pate à choux.

After chocolate, coffee eclairs are the most popular, but you can get various other flavors such as pistachio, raspberry, etc.

Bûche de Noël, meaning Christmas log, is the staple of the Christmas meal in France. There are many other christmas traditions, but this is one of those that is followed religiously (pun intended!). It is basically a chocolate roll cake, but can also come in other flavors such as strawberry.

Gâteau au Yaourt (translated as “yogurt cake”) may be the cake specially made for kids, but that doesn’t mean adults can’t enjoy it as well. Light and fluffy, it makes a perfect after-school snack, or a lovely dessert after a heavy meal.

If it is early January, you will likely find your local French patisserie packed with people trying to buy a galettes des rois. And that is because this treat is especially reserved for 3 Kings’ Day or Jour de l’Epiphanie.

The galette des rois is a type of pancake made from pastry that has been browned in the oven. It is sometimes filled with frangipane, fruits or creams.

You won’t see a piece montée unless you go to a traditional French wedding, but if you do, you should definitely try it. Instead of elaborate cake, weddings in France usually have a doughy pastry pyramid called the croquembouche or la piece montée.

This literally translates to bite in the mouth and is made out of small choux pastries. If you do want to try a pâte à choux without going to a wedding, you can easily try them at your local French patisserie. (For Canadian readers, they are a bit like timbits!)

So many desserts, so little time! And don’t forget to try a digestif with your dessert. 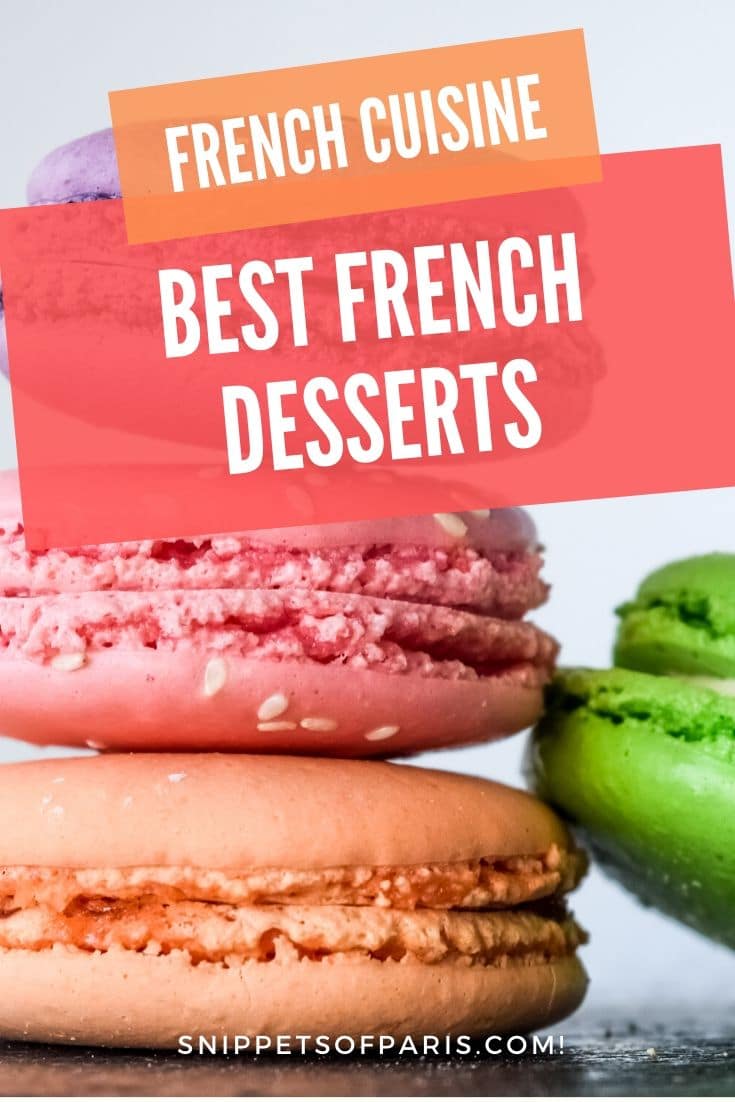