Skip to content
With discounts up to 20-40% in shop!
From canelés to cèpes à la bordelaise, learn about classic foods in Bordeaux that are much loved by the locals. With wines, main dishes, desserts, and more. 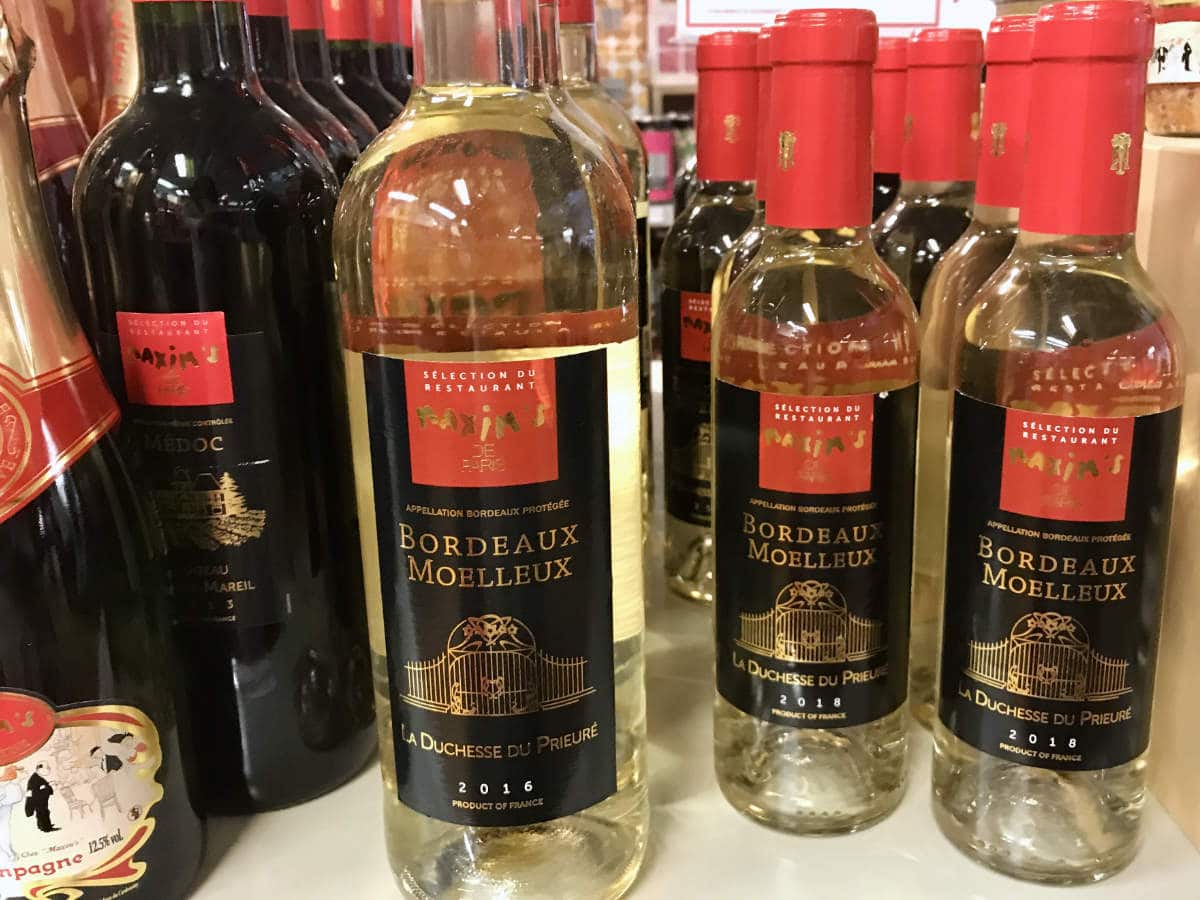 Food is a big part of the French experience and a trip to Bordeaux is no different. Located in the region of Nouvelle Aquitaine which has a rather wide food scene itself, the gastronomy in Bordeaux is unique.

Bordeaux is known for its wine, and to complement those wines, there are several dishes that are specific to this part of France. From the cèpe mushroom to other dishes cooked à la bordelaise, the food has a refined and delicate quality about it.

And with plenty of patisseries, brasseries, and Michelin starred restaurants around there is a wide variety price points for visitors to enjoy those local specialties.

Whether you’re looking for a snack, a full meal or an authentic dessert, if you are a foodie on a trip to this part of France, be prepared to eat and drink your way through Bordeaux. Bon appétit!

Originally from Bordeaux, a canelé is a small French cake flavored with rum and vanilla. It usually has a soft custard center and looks like a small bite-sized cupcake.

Sometimes topped with cream, it is now widely available across France, and is often given as a gift. You can buy a canelé cake mold to make your own here.

With some of the most popular red wines in the world, Bordeaux is a wine region to be reckoned with. Located on the west coast of France, its easy access to the ocean meant that Bordeaux wines could be easily exported to England, Netherlands, and other European countries as early as the Middle Ages.

When Eleanor of Aquitaine married the English king Henry II, she and her royal court brought with them their culture of wine, as well as easy access to Bordeaux’s vineyards.

When picking a bottle of wine in Bordeaux, it is important to note that a good bottle of wine will be named after the château/domaine it is produced at, not the type of grape. This is unlike some of the other French wine regions, who name the bottle after the grape.

For example, the Cabernet Sauvignon, Merlot, and Malbec are actually grapes, after which quite a few different wines are named. This is why those wines can be produced in France, the United States, Australia, etc. and all called by the same name.

But a Bordeaux bottle of wine will have names of the area and the producer like Mèdoc, Margaux, Pauillac, Pomerol, and Saint Emilion which are all high-end red wines. These are all areas within Bordeaux with their own AOC appellations.

Pauillac and Margaux (which are both part of Mèdoc) have some of the finest grand cru wines in the world. These wines age well, and so are kept for long periods of time, greatly increasing their value. They tend to be high in tannins and have more fruity tones like cherry, currant, and blackberry.

Some of the Bordeaux Grand Crus and the most famous French wines in the world are:

Graves is another area with a number of AOCs for red and white wines, with nearby Sauternes making sweet wines. If you prefer sparkling wines or rosés, try Les Cordeliers. You can read more about Bordeaux wines here.

While not specific to the city of Bordeaux, the surrounding region of Nouvelle Aquitaine is famous for its love of foie gras. (It goes very well with the wines.)

Whether you are celebrating Christmas in France, or just a regular evening with friends, foie gras is an incontournable (an essential).

In France, there are many types of foie gras that you can find. The process dates back to antiquity and is legally protected. There are different types of foie gras, from the most expensive to cheaper as follows:

And if foie gras itself is too expensive, you can also try a pâté of foie gras. It is usually cut in slices and arranged on a tray, along with some mini toasts. Pair them together and munch away.

And if you enjoy foie gras, head to Sarlat in the Dordogne dept about 2 hours away from Bordeaux where the first weekend of March is when a celebration of foie gras is held. You can read more about eating foie gras here.

The nearby Arcachon Bay and Le Cap Ferrat, about an hour away from Bordeaux, is famous for its oysters. There are several oyster farms in the area, bringing their produce to restaurants in the biggest city nearby, Bordeaux.

In addition, there are several oyster festivals every year on the shores of Arcachon Bay, in Andernos-les-Bains and Lanton in July, and in Gujan-Mestras and Arès in August.

Fresh oysters are not usually cooked in France, but served as is, fresh from the ocean. (Fresh oysters are a must-have in France for Christmas.) The hardest part about serving oysters is opening the top shell.

But once that is done, just squeeze a bit of lemon on them and serve in a tray.

Note, I highly recommend dining at a reputable restaurant, as you do not want to risk food poisoning from bad oysters!

A particular favorite around the Bordeaux area is the oyster house Damien Boulan (Chez Boulan) in Lège-Cap-Ferret which is about 1h20 away from the city center.

The term à la bordelaise is typical in the cuisine in this area, and refers to a particular cooking style. In essence, it involves the presence of a wine sauce, white wine for fish and white meats and red wine for red meats.

There are plenty of meals that can be served up à la bordelaise, from eggs and fish, to seafood crustaceans and steaks.

One of the most popular is poisson à la bordelaise, where fish is breaded and baked in a sauce involving white wine and lemon juice.

A popular delicacy in Bordeaux, which goes delightfully well with the local wines, is the caviar d’aquitaine. The sturgeon comes from the nearby Gironde estuary and the rivers of the Garonne.

It was during the 20th century that the first caviar production appeared in this area, fully taking off after WWII. The caviar d’aquitaine is lightly flavored in a variety of aromas including butter, hazelnut, fresh walnut, etc.

Dunes blanches is a protected trademark, and is basically little round chouquettes pastries topped with a mixture of cream and whipped cream.

They are also often filled with chocolate, nutella, caramel, or fruit compotes. You can find them all over Bordeaux, or visit Chez Pascal Dunes Blanches which has patisseries in Bordeaux, Cap Ferrat, and even one in the Marais in Paris.

Cèpe de Bordeaux is a species of mushrooms basidiomycetes of the family of Boletaceae, also known in English as the “porcini mushroom” or the “penny bun”.

A favorite among vegetarians and non-vegetarians alike, they have a chewy almost nutty flavor. The porcini mushroom is a very popular on restaurant menus in the Bordeaux area, gracing everything from dishes like risotto to pizza, and more.

They are also often served directly from the fry pan as a starter, or à la bordelaise cooked in wine.

Pauillac is one of the finest wine regions within the Bordeaux appellations, and with that a traditional lamb dish to accompany those wines.

It is an appellation protected by the geographical indication indicating a lamb raised “by its mother” and naturally breastfed for at least 75 days after birth.

The dish is normally cooked in the oven with spices, oil, and butter, and served with vegetables and sometimes a sauce.

Lillet is a wine-based aperitif, first produced near Bordeaux in the late 1800s. It is made from 85% wines and 15% fruit liquors and cinchona. Wallis Simpson, the Duchess of Windsor, was said to be a big fan of Lillet.

It is an alcohol content of 17% and comes in a range of flavors. White has a citrus with a hint of honey taste, which is both sweet and bitter. Rosé is floral and fruity, and red being less sweet and less bitter.

Puits d’amour literally translates to “wells of love” and is perhaps meant to reference the nether regions, a joke that went down well in the royal courts.

It is in essence a small cupcake topped with cream and caramel. The first official mention of the recipe appeared in French chef Vincent De La Chapelle’s 1735 book Le cuisinier moderne (the Modern Cook).

The center is usually filled with jelly, raspberry jam, or vanilla pastry cream. The surface of the cake is sprinkled with confectioners’ sugar or covered with caramel.