Skip to content
With discounts up to 20-40% in shop!
Get the recipes for the 5 French mother sauces and their most popular daughter sauces. With dishes to serve them with and more.
(As an Amazon affiliate, we may earn commissions for certain purchases. Please note, all information is provided for entertainment purposes only. See our disclosure policy for details.)

French food is considered some of the best in the world. One of basics of French cooking is to use fresh quality ingredients and give them a starring turn. But the real trick is in complimenting that ingredient with a sauce that elevates the dish to a higher level.

Indeed, the sauces are one of the most important elements in French cuisine. They are really easy to overlook while you are cooking that luscious plat (main dish), but don’t! The secret is in the sauce, as the famous saying goes.

And the best part is that most of the traditional French sauce recipes are quite easy and quick to prepare while the rest of the meal is cooking.

In French cuisine, the sauces are broken down into a mother sauces and daughter sauces.

A mother sauce is a foundational sauce from which a variety of other sauces may be derived through the addition of ingredients such as meat stock, wine, vegetables and herbs.

It is easier to break the sauces down into categories, because some of them are rather similar, and the categories will help avoid confusion. So with that, let’s get to all those French sauces, shall we? Allons-y!

What are the 5 Mother Sauces?

There are five mother sauces in classical French cooking. Each one can be made into a number of different sauces by adding other ingredients after the initial preparation. The 5 French mother sauces are:

In 1833, French chef Antonin Carême, one of the most important French chefs and cookbook authors of the 19th century, published a classification of French sauces in his reference cookbook L’art de la cuisine française au XIXe siècle (“The Art of French Cuisine in the 19th Century”).

Instead of mother sauces, he called them Grandes et Petites sauces (“great and small sauces”). However, he had tomato sauce, mayonnaise, and the hollandaise as “small sauces”.

These days, mayonnaise is not officially on the sauce list (too similar to hollandaise), but hollandaise and tomato sauce are mother sauces.

The current categorization is attributed to French chef Auguste Escoffier based his 1907 Le guide culinaire (A guide to modern cookery).

You can read more about each of the 5 mother sauces, their recipes, and derivatives below:

You can use béchamel sauce almost any sort of dish, from pasta bakes and lasagna, to baked chicken. It can also go directly on cooked or steamed vegetables like spinach, cauliflower or broccoli.
Certain French dishes like gratin potatoes, coquilles st jacques, and creamy chicken blanquette are also regularly made with béchamel sauce.

You can get the recipe for béchamel sauce here.

Tomato sauce is one of the basics of Mediterranean cuisine. Ingredients in the classic French tomato sauce include tomatoes, lardons, onions, bay leaves, thyme, garlic, salt, pepper, and a teaspoon of sugar.

Pasta is always a favorite with tomato sauce, but you can also serve it with baked chicken or fish like salmon or codfish. You can even use it as a topping on baked eggplant (aubergine) or a sauce with gougères. Other ideas would be to serve it with quinoa or polenta.

You can get the recipe for tomate provençale sauce here.

Another very popular sauce is tranquil hollandaise. Ingredients in the hollandaise sauce include egg yolks, melted butter, and lemon juice.

The hollandaise can also be used to add flavor to as well as any type of green vegetable (asparagus, brocolli, etc.) You can also use it as a sauce with:

Daughter sauces of the hollandaise include:

You can get the recipe for hollandaise sauce here.

Vélouté (pronounced “veh-loo-tay”) is a sauce, but it can also be a blended soup. Ingredients in a velouté include butter, flour, and chicken stock.

You can get the recipe for velouté sauce here.

Espagnole sauce literally translates to Spanish sauce. Ingredients in the espagnole sauce include butter, flour, and beef stock, as well onions, carrots, celery, and tomato purée for flavoring. The vegetables are removed before serving, after the sauce is reduced.

The sauce is used as an accompaniment to meats or potatoes. Other daughter sauces include:

You can get the recipe for sauce espagnole here.

Each mother sauce has many daughter sauces or derivatives that have been adjusted over the centuries as the concept of cooking and haute cuisine became more creative. Some of the most popular French daughter sauces are:

Rouille sauce is usually served with bouillabaisse, but you can also serve it as a sauce to accompany meat, grilled fish, or potatoes.

As a sauce, it can go with just about any apéro finger foods from french fries and charcuterie, to escargot. As a simple idea, serve it with pain complet country bread, or baguette.

You can get the recipe for rouille sauce here.

Aioli is usually prepared and served with steamed or poached codfish, lightly seasoned with herbs, olive oil and lemon.

But you can also try it with other fishes sea bass, crab cakes, shrimp or other types of seafood.

Pronounced “ay-yo-li”, ingredients in the aioli sauce include garlic, egg yolks, olive oil, lemon juice, and mustard. It is a type of mayonnaise, only with more garlic.

As a side, add steamed fresh vegetables like carrots, potatoes, asparagus, or other vegetables that are in season. You can get the recipe for aioli sauce here.

The word fondue comes from the French word fondre, meaning to melt.

There are many types of fondue, with the most famous being:

You can find the recipe for cheese fondue here.

The béarnaise sauce taste delicious with nice piece of red meat like prime rib or lamb that has been cooked on a stove, in the oven, or charbroiled.

It also goes as well with other options like grilled fish and poached eggs and as a sauce with:

You can get the recipe for béarnaise sauce here.

Pronounced “pis-too”, ingredients in pistou sauce include garlic, olive oil and basil. Pistou can serve as a sauce for dishes like pastas, baked chicken, or with a side of steak.

It can be a bit strong for fish dishes as it can overwhelm them, so use in moderation. However, it is excellent as an accompaniment to baked salmon or tuna.

You can get the recipe for pistou sauce here.

The Beurre blanc is also sometimes called the Beurre nantais. Ingredients in beurre blanc sauce include butter, vinegar or white while, and shallots.

This sauce is to be served warm as an accompaniment to seafood. It traditionally served with poached or grilled fish like pike, salmon, and codfish. It also goes well with grilled shellfish like shrimp, crab and lobster.

You can get the recipe for beurre blanc sauce here.

Tartar sauce is usually served with breaded dishes like the English fish and chips.

It also goes well with fried seafoods like shrimp, oysters, and fish fingers, or breaded meat like schnitzels from Alsace.

Ingredients in tartar sauce include egg yolk, chopped pickles, capers and herbs such as tarragon and dill.

You can get the recipe for sauce tartare here.

If you enjoyed that, check out our other classic French recipes that are easy to prepare. Bon appétit and à bientôt ! 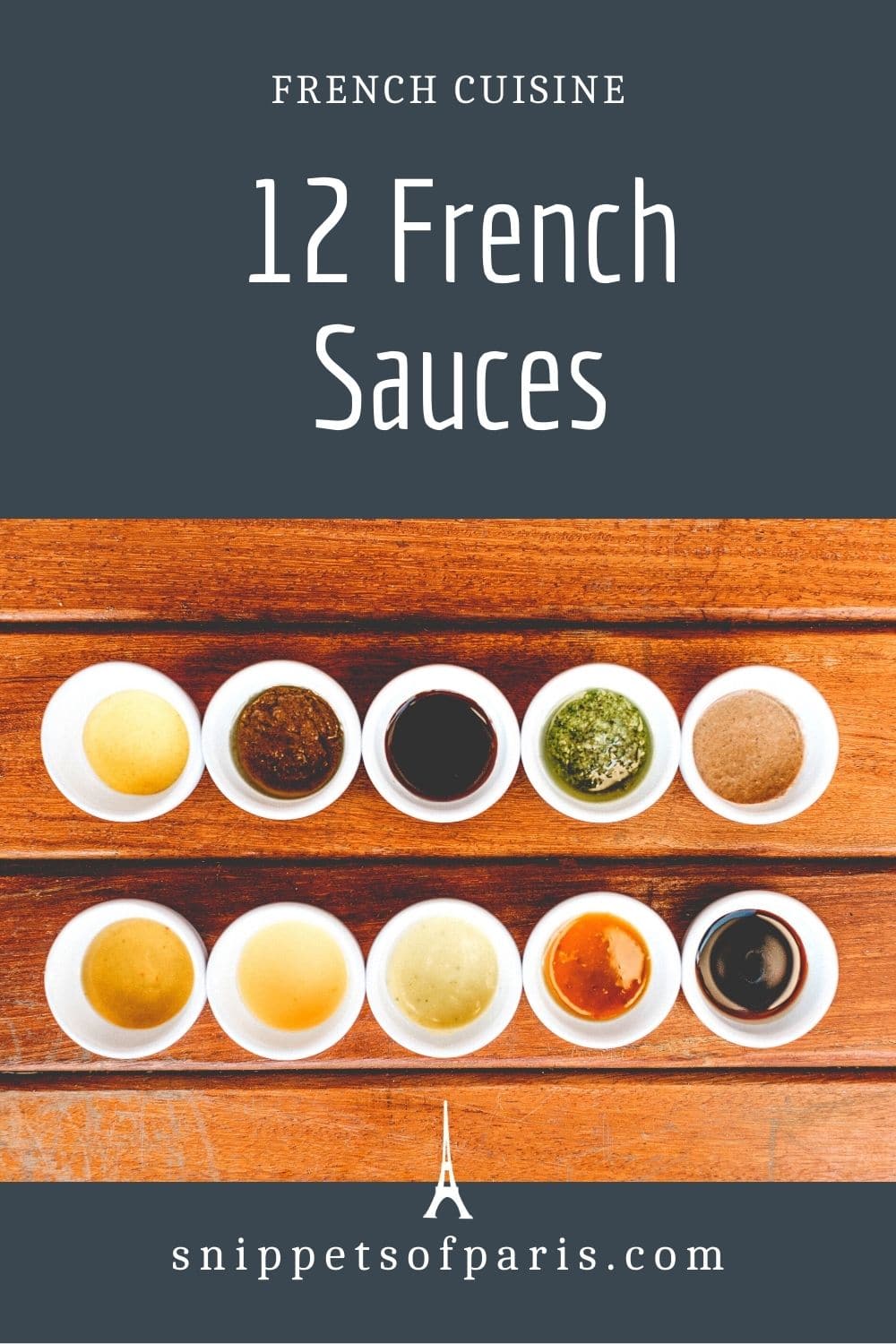