Skip to content
With discounts up to 20-40% in shop!
Wondering how where French women get that delightful "Je ne sais quoi"? All is not always what it seems. See why French people are ready to throw off the stereotype.
Shop Now: Fille in a hat
(As an Amazon affiliate, we may earn commissions for certain purchases. Please note, all information is provided for entertainment purposes only. See our disclosure policy for details.)

We like to have a bit of a laugh once in a while, so I thought I would explore that oh-so-elusive concept of the French “Je ne sais quoi” and its meaning.

It is used to describe something that is indescribable, something that you can’t quite put your finger on. Very helpful I know. So what does it mean exactly? Let’s find out, shall we? Allons-y!

Je ne sais quoi literally translates into “I don’t know what”. But French people tend to use it one of two situations, as follows:

The first version of “je ne sais quoi” just means when you don’t know the answer to something. This can be rather simple as:

As you can see, it is a rather bland statement. And indeed in France, we mostly use the phrase in this context. The verb is savoir which in French means to know.

But over the years, to anglophone audiences, it has come to signify something else:

Here it is described as a thing that is a noun, compared to a verb in the first example. It is a particular characteristic/object that the speaker is not sure what, that is different and/or missing.

It is that 2nd unquantifiable quality, that mystery, and dare we say a certain sexiness that is at the heart of why this phrase captures the imagination.

☞ READ MORE: The French Controversy: Who pours the wine?

And when we speak of that romantic “je ne sais quoi“, it is usually specifically in the context of the French woman. With popular French actresses such as Brigitte Bardot and Catherine Deneuve crossing the Atlantic and entering the Anglo-Saxon pop culture, the expression has taken on a new context.

The phrase has come to be used more often the context of that unattainable woman, and particularly the Parisienne:

It is supposed to be the different way of dressing, wearing makeup, the seeming “effortlessness” of French beauty standards, compared to North Americans.

Now to be clear, this concept is a bit of a misnomer, because France is a country of 65 million people, and if you wander around France you will see that very few people look like Brigitte Bardot!

And when we are talking about “la Parisienne“, there is a reason that women in Paris look like they are not making an effort. The messy bun, the flat shoes, the lack of makeup, etc. tends to be because people don’t have cars.

If you are leaving your Parisian apartment in the morning, commuting to work on the metro, and then going out for a drink after work without going home, well you too are going to look a bit dishevelled.

On the other hand, you have a car and are driving around everywhere, you too can wear high heels, refresh your makeup as often as you want, and be perfectly over-hairsprayed! Given the circumstances, French women and popular culture have taken what should be a disadvantage and added their own insouciance (careless indifference) and adapted their style to it.

So with all that being said, as an implanted Parisienne, I can’t take this concept too seriously. To have some fun with it, I put together a few tips on how you that Parisienne gets her je ne sais quoi. It is elusive but with tongue firmly in cheek, here we go:

If you feel yourself losing your "Je ne sais quoi", book a flight to Paris immediately to re-immerse yourself in more Frenchness.

So how Parisian are you? Do you have that “je ne sais quoi yet”? If you enjoyed that article, you can read more about French style here. 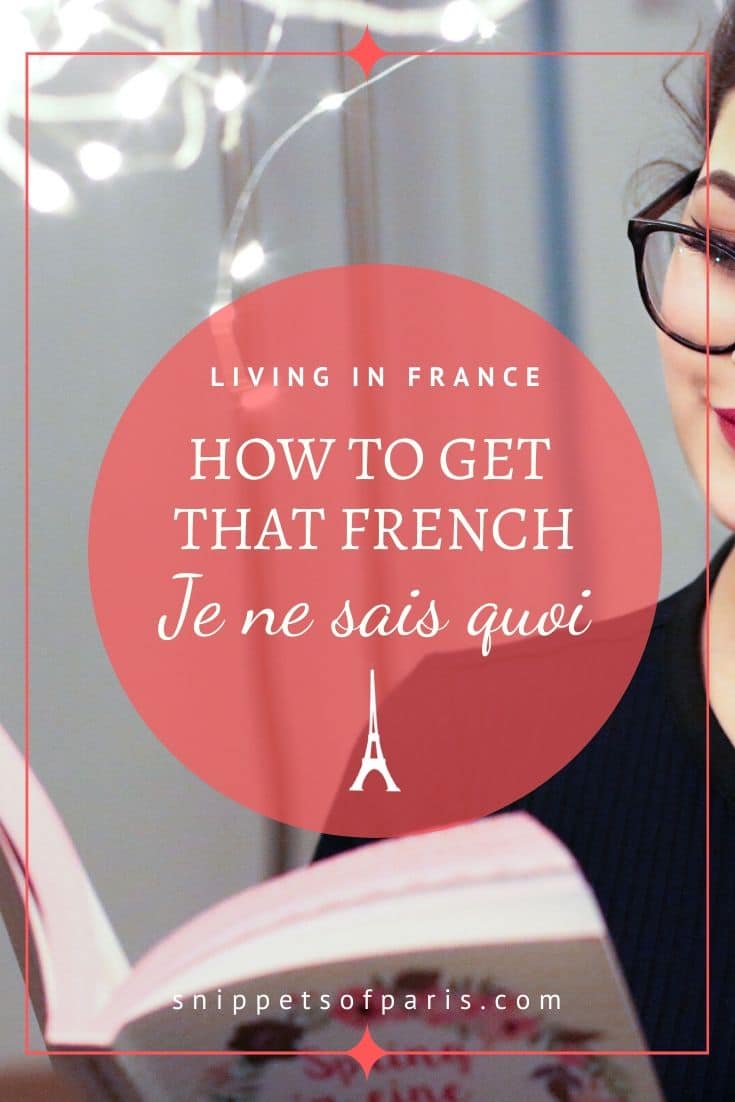 The Promise for the future: Notre-Dame de Paris

Driving Laws in France: 31 Rules and Tips to know

31 Tips to buying a house in France (with Printable Checklist)