Skip to content
With discounts up to 20-40% in shop!
Find out interesting facts about the Paris metro, including its history, famous station names, safety, accessibility in the metro, and more. 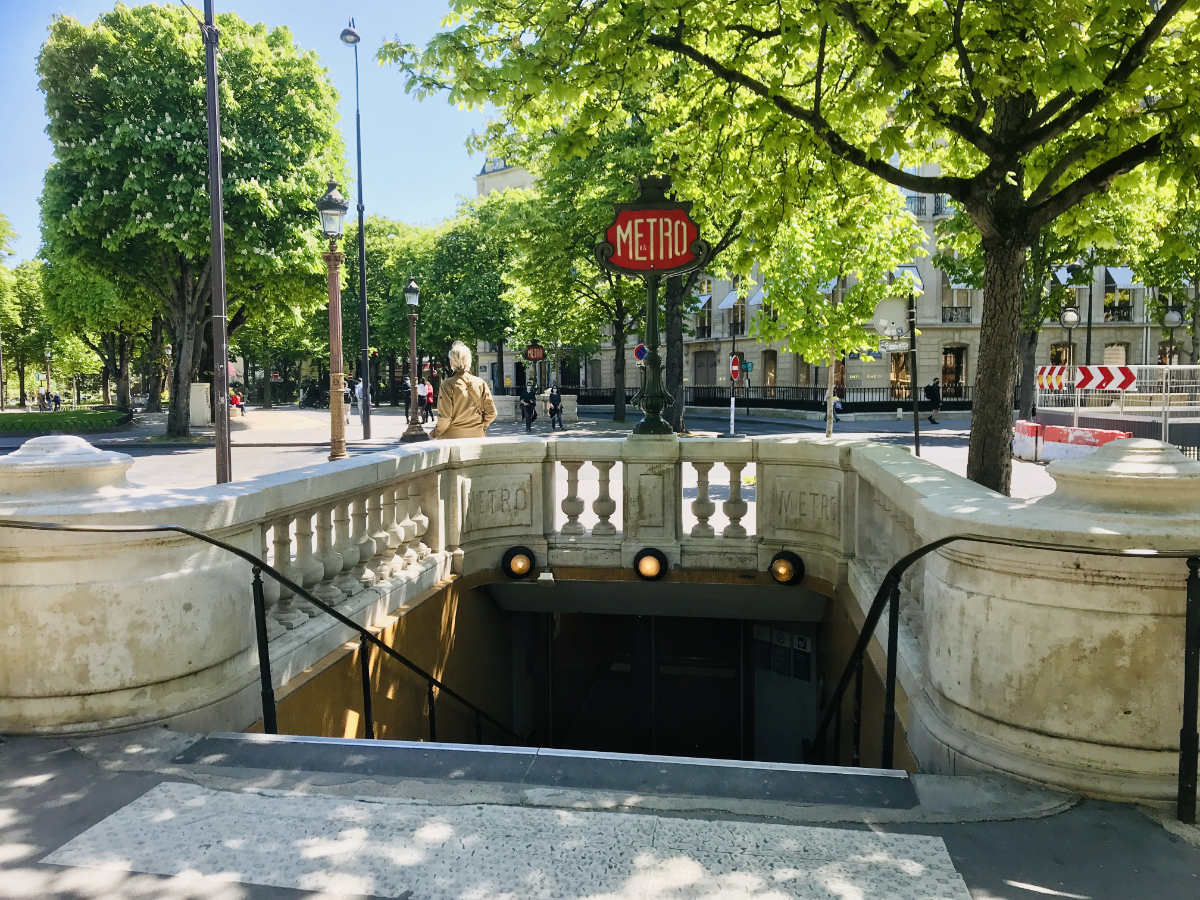 Since the days of the first metro lines in Paris, those wide open doors of the carriage trains have always attracted the crowds. The Paris metro is second busiest metro system in Europe, after the Moscow Metro, and has become a symbol of the city.

The metro network plays an important role in this densely compact city’s lifeblood, as it provides transport all hours of the day and late into the night.

Whether it is tourists shuttling about between the Eiffel tower and the Louvre museum, or locals travelling between work, play, and home, the easiest way to get around Paris these days is the metro.

Paris is clogged with cars and traffic jams are common, making the metro is a cheap and easy way to get around town. (Excluding the dreadful accessibility issues the Parisian metro suffers from which we will discuss later!)

If you walk around the metro in Paris, you will signs for RATP everywhere, which is the state-owned public transport company that operates the metro, for better or for worse. It stands for Régie Autonome des Transports Parisiens (meaning “Autonomous Parisian Transportation Administration”).

So let’s cover some interesting facts about the Paris metro and how Parisians really feel about it, shall we? Allons-y!

The first metro trains began running on 19 July 1900, during the World’s Fair (Exposition Universelle) that was held in Paris.

Because Paris is an old city where extensive labyrinths and catacombs already exist under the city, it was relatively easy to dig new tunnels. It is the 6th oldest metro in the world after:

The train network in Paris expanded quickly until World War I and the main stations within the center were complete by the 1920s.

The original name of this Parisian institution was La Compagnie du chemin de fer métropolitain de Paris (“The Paris Metropolitan Railway Company”), which gradually shortened down to métro and became a term used all over the world.

2. Metro stations around Paris: 304 and counting

There are currently 304 stations over 16 metro lines scattered in and around Paris, and more are expected. Four more metro lines are in the works, with several additional stations that are expected to see the day between 2024-2030.

3. Stations are an average of 550 yards away from each other

Paris intra muros is quite small in size, and metro stations in the city are are quite close together. In the dense center, stations are often within 550 yards (500 meters) from one another, making it often easier to just walk between stations rather than go underground.

It is estimated to take around 1 minute to get from one station to the other on the metro.

4. Depth of the trains and metro

The Paris metro is not very deep, with many stations a mere 20 feet underground. The deepest metro station is Abbesses at 118 feet (36 metres) underground.

And in fact, not all of the Paris metro is underground. Metro lines 2 and 6 have a lot of stations that are above ground at the 2nd-3rd floor level or above, to fly over car and pedestrian traffic.

The French love to name metro stations after famous people, most of whom have to do with the wars that France has been involved with. Here are the most notable, by metro line:

Keeping with the war theme, several metro stations are named after famous battles:

7. Pickpockets and safety in the Metro in Paris

The reality of living in Paris is that you do have to keep an eye on your things to prevent pickpockets. This is especially the case in the crowded metro.

As such, the Paris Metro regularly sounds warnings to tourists about watching your stuff in French, English, German, Spanish, and Japanese.(If you are a woman, I highly recommend a cross-body purse with zippers that you can easily access while out and about.)

With lengthy stairways, a lack of elevators, escalators that often don’t work, and large gaps between the platform and the trains, the Paris metro rates very poorly on accessibility.

Only 3% of the metro is considered wheelchair accessible, compared to 20% in London, and 24% in New York. (Most locals with children in strollers or luggage avoid the metro.)

Paris’s bus network above ground is considered 90% accessible, but it is slow and often stuck in traffic jams.

Several metro stations are named after famous French writers including:

10. Metro Rambuteau is named after a government official who transformed Paris

Just 40 years before the 1st metro was inaugurated in Paris in 1900, the city was undergoing a massive transformation.

An architect named Baron Haussmann was hired by Emperor Napoleon III to raze much of the city to the ground (over 60%) and reconstruct the Paris in the Hausmannian architecture that we see today.

While Haussmann was disliked and did not get a metro station named after him, a government prefect named Claude Barthelot, the Comte de Rambuteau who established the groundwork for this transformation, is honored at Metro Rambuteau on line 11.

11. Quatre September Metro station refers to a date even most French don’t remember

The Quatre-Septembre station refers to September 4, 1870, the day of the proclamation of the Third Republic. In essence, France went through several revolutions, changes of government, and even a coup d’etat.

The French 3rd republic lasted from 1870 to 1940 when WWII started. With 2 more Republics after that (we are currently in the 5th republic) most Parisians will be hard-pressed to remember what “4 September” refers to.

12. The tunnels were used by the French Resistance to plan and carry out attacks during WWII

During WWII, cars and taxis were greatly reduced in Paris, making the population dependent on the metro. With crowded platforms and trains, the metro became the ideal place for the French Resistance to hide and plan their attacks.

Thousands of incidents were noted in and around the metro during the German occupation of Paris, including attacks, sabotages, bombs exploded, breakdowns caused, brakes disconnected, etc.

13. Arts et Métiers station is designed to look like a submarine

For the 200th anniversary of the Conservatoire national des arts et métiers that is nearby, the Metro Arts et Metiers was made to look like a submarine out of a Jules Verne novel.

14. Louvre-Rivoli station has replicas of ancient treasures on display

The Louvre-Rivoli metro station took years to renovate, but when it finally finished it was worth the wait.

Replicas of famous treasures like Venus de Milo and Code of Hammurabi were placed in the metro, bringing a bit of the Louvre museum down into Paris’s underground.

15. Bastille station has revolutionary paintings on the wall

The prison fortress at Place de la Bastille may no longer be standing after the storming of the Bastille on July 14, 1789, but the metro station Bastille honors that seismic event with tile murals showing the Parisian revolt.

The Bastille station is rather large, so if you are looking for it, it is on the platform of Metro Line 1.

The Paris metro was built so densely close together that there are several stations that have been abandoned for not being useful. These ghost stations as they are called, include:

17. Musicians need a permit to play in the metro

The Espace Metro Accords (EMA) was created in 1997 to decide which musicians can play their music in the metro. It holds annual auditions with 350 candidates selected each year.

There are several metro stations named after France’s famous inventors including:

20. Porte de Lilas is used as a movie set

With Paris being a popular backdrop for TV shows and movies like Amelie, Da Vinci Code and Midnight in Paris, there were always going to be scenes shot in the metro.

For proper shooting conditions, the Porte de Lilas metro station has an unused platform that is often used as a backdrop for French movies. The RATP will make trains available along with a driver to run the trains as necessary (for a fee, of course).

If you are in Paris for Journée du Patrimoine, you can visit the movie set…which actually just looks like the metro.

The Metro station Concorde has is right above Place de la Concorde, which is where Marie-Antoinette and King Louis XVI (along with many other people were guillotined.

So in keeping with the theme, the metro station has a word search puzzle on the walls with phrases from the French Déclaration des droits de l’homme (meaning “Declaration of the Rights of Man”).

22. Some metro stations are in a flood zone

Much of Paris along the quays of the Seine river are considered to be in a flood zone. There have been several large floods in the metro, with one of the most recent ones being in 2018.

The biggest one however was the flood of 1910 when the waters of the Seine rose over 8 meters!

Line 1 that stretches from East to West follows the Axe historique de Paris based on the old Voie Triomphale. Stretching from Chateau de Vincennes to La Défense, this metro line remains within walking distance of many of the major historic sights of Paris.

Even Notre Dame de Paris which is not shown above as it has its own metro station, is only a few hundred meters from Metro Line 1.

Along with Line 1, Line 13 is one of the busiest in Paris. However, unlike Line 1, it is not yet renovated and rather cramped, making it the train that Parisians try to avoid.

The line is so overcrowded the RATP uses “pushers”, employees whose job it is to push people into the trains during rushhour. Unlucky n° 13.

25. Châtelet Les Halles is one of the biggest metro stations in the world

Located in the center of the city, Châtelet Les Halles is one of the biggest metro stations in the world. It connects no less than 5 different metro lines and 3 RER train lines.

It is located on the site of the Grand Châtelet , a former fortress which served as a prison and court under the Ancien Régime, before being demolished in 1802 during the reign of Napoleon Bonaparte.

There are portions of it that always seem to be under construction, and it is so large it can take a good 5 minutes to walk from one train line to another.

As Paris was expanding, it absorbed smaller communes and towns that were originally in its outskirts.

In 1853, eleven municipalities bordering the old city of Paris were eliminated and absorbed into the city, including Belleville, La Villette, Passy, Batignolles-Monceau, Bercy, La Chapelle, Charonne, and Montmartre. You will recognize these names now as metro stations around Paris.

27. There are 27 metro stations named after saints

France may hold the concept of laicité close to its heart (meaning “the separation of church and State” ), but there are 29 Paris Metro stations that are named after the Saints:

There are also two metro stations named Notre Dame (Notre-Dame-de-Lorette and Notre-Dame-des-Champs) and another one named after the Catholic priest, Cardinal Lemoine.

28. There are 2 stations named after Michelangelo

Michaelangelo may never have been to France, unlike his contemporary Leonardo da Vinci, but he nonetheless has 2 metro stations named after him: Michel-Ange – Auteuil and Michel-Ange – Molitor which are next to each other on (line 9).

If you enjoyed that article, you may enjoy reading more facts about Paris.

All the French Holidays, Events and Celebrations