Skip to content
With discounts up to 20-40% in shop!
Get the scoop on the most interesting facts about the Eiffel Tower, a monument instantly recognizable around the world. A symbol of not only Paris, but all of France. 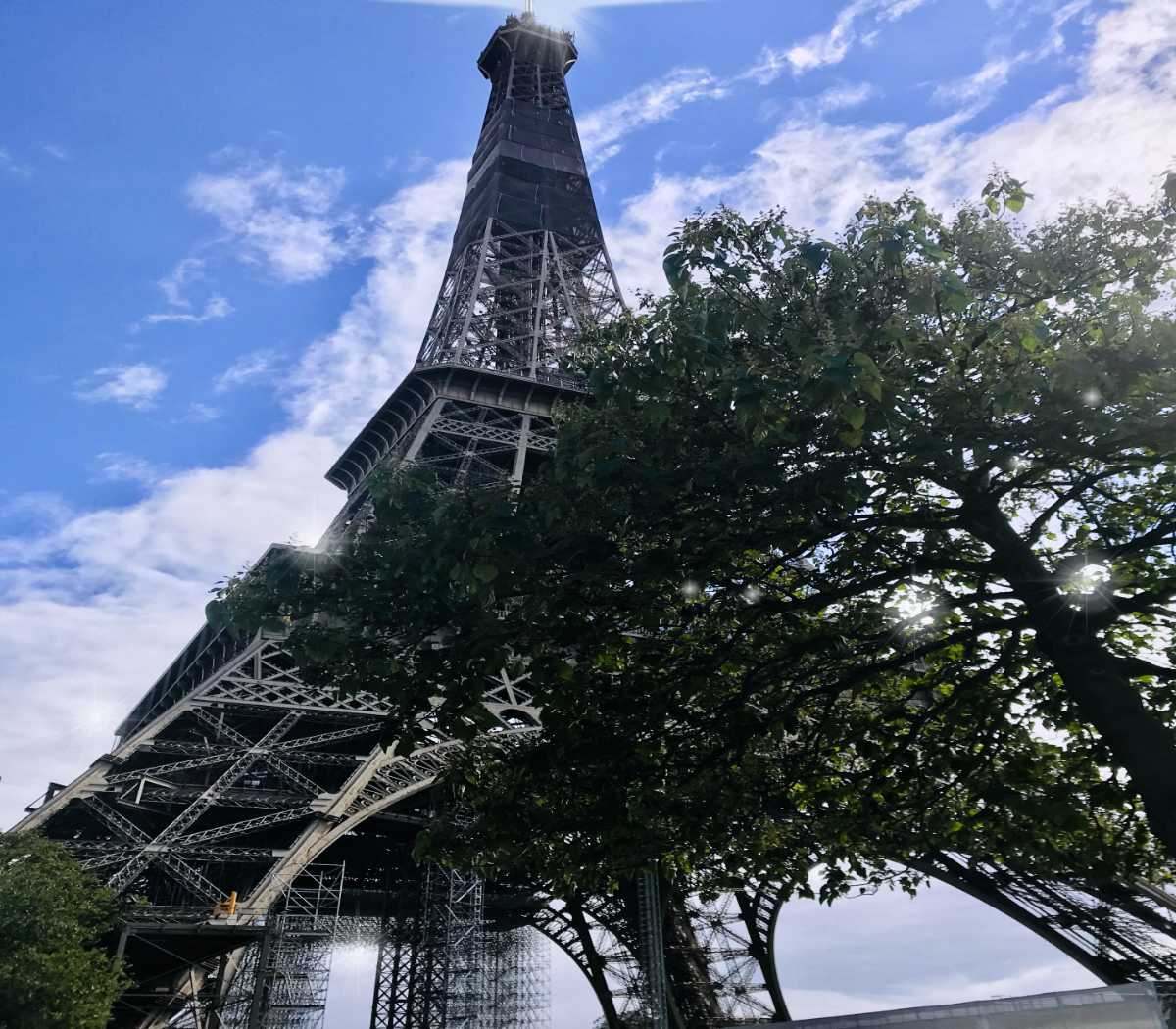 She goes by many names. La Tour Eiffel or la Dame de Fer (“The Iron Lady”) in French, and of course the Eiffel Tower to the rest of the world. I call her “she” as opposed to “it” because that is how she is referred to in French.

Instantly recognizable, the Eiffel Tower has become the symbol of not only Paris, but also all of France. But did you know though, that as a towering symbol, Parisians detested this “ugly modern pile of junk”?

These days we can’t imagine a world without the Eiffel Tower, like the scene in the movie Mars Attacks where she is destroyed! As a local in Paris, I tend to instinctively look for her after coming out of the underground metro, to gauge where I am and which direction I’m heading towards. What a difference a few decades makes.

So let’s plunge into the beginning shall we, with a few facts about the Eiffel Tower in Paris, shall we? Allons-y!

The Eiffel Tower is named after its engineer, Gustave Eiffel who was from the French city of Dijon.

Eiffel was not just any guy. He had constructed several buildings, bridges and viaducts around France before the Eiffel Tower.

He was also just coming off of another large French project building the metal framework with sculptor Frédéric Auguste Barthold for the Statue of Liberty which opened in 1886.

A smaller version of the Statue of Liberty can be found a few 100 yards away from the Eiffel Tower in Paris on Pont de Grenelle.

Construction of the Eiffel Tower started on 26th January 1887, and was completed in 2 years, 2 months and 5 days, a massive technological feat.

Each of the 18,000 pieces used to construct the Tower were specifically designed and calculated, traced out to an accuracy of a tenth of a millimetre and then attached together using 2,500,000 rivets.

Along with Eiffel, the names of 72 engineers, scientists, and mathematicians who contributed to its construction are engraved on the side of the tower.

In an era when world fairs were a real spectacle, the Eiffel Tower was built as a centerpiece for the 1889 World Fair in Paris.

Nearly 2 million people visited Paris during that World Fair, by all accounts a complete success. At the time, the Eiffel Tower was the tallest tower in the world and people were keen to admire this architectural masterpiece.

These days, it is estimated 7 million people visit the tower annually.

About 80% of the funding for the tower had come from Gustave Eiffel himself, and so the 20-year lease of the property was to allow him to recuperate his investment by selling tickets, exhibitions, etc.

Today the Eiffel Tower may be a symbol of this romantic City of Lights we know as Paris, but when construction was going on, the project was detested.

On Valentine’s Day in 1887, a group of famous Parisian artists and intellectuals signed the following letter that ran in the Le Temps newspaper:

“We come, writers, painters, sculptors, architects, passionate lovers of the hitherto intact beauty of Paris, to protest with all our strength, with all our indignation, in the name of little-known French taste, in the name of art and French history threatened, against the erection, in the heart of our capital, of the useless and monstrous Eiffel Tower, which public malignancy, often imbued with common sense and the spirit of justice, has already baptized with the name of “Babel Tower”.

It suffices, moreover, to realize what we are advancing, to imagine for a moment a vertiginously ridiculous tower, dominating Paris, as well as a gigantic and black factory chimney, crushing Notre-Dame with its barbarous mass.

The Sainte-Chapelle, the Saint-Jacques tower, the Louvre, the dome of the Invalides, the Arc de Triomphe, all our humiliated monuments, all our shrunken architecture, which will disappear in this astonishing dream.

Now, I should note that this sort of protest is not really unusual for French people. Other Parisian landmarks like the Louvre pyramid, Centre Pompidou, and Tour Montparnasse were all detested as they were constructed. (As a Parisian, I can confirm Tour Montparnasse remains a blight on this city.)

Gustave Eiffel might have suspected that his tower was not going to get a warm reception, so he had a plan to prove its usefulness. One of the most interesting facts about the Eiffel tower is that the Iron Lady was not to be just some pretty young thing, it was to become a tool for studying science.

Meteorological, astronomical, physics and telegraph experiments were conducted in the tower. With a passion for aerodynamics, all sorts of scientific apparatus was installed (barometers, anemometers, lightning conductors etc.)

Notably he even Thomas Edison there, who offered him his famous “spectacle” class M type Phonograph.

He also erected a radio antenna on top of the tower. The value of the tower in sending and receiving wireless messages became particularly important to the French military, which is why the tower continued to stand after its 20 year initial lease expired in 1910.

In a city which doesn’t have many skyscrapers, the Eiffel Tower is a prominent 324-meter-tall structure. It was actually slightly shorter when it was built, with the difference being more modern antennas added to the top.

It was the tallest structure in France until the construction of a military transmitter in the town of Saissac in 1973. There are 1665 steps from bottom to top.  If that seems like too much walking for you, there are 5 elevators from the ground esplanade to second floor, and another two elevators from second floor to the top of the tower.

8. Apartment at the top

Built as a place to welcome visitors and dignitaries, the apartment is around 100 sq meters (1076 sq feet). Although that sounds somewhat large, at least when compared to the size of expensive Parisian apartments, it does not have a bedroom, and a large portion of it is occupied by an elevator cabin and other technical installations.

The apartment is at times available for tours, with wax sculptures of Gustave Eiffel, his daughter Claire, and Thomas Edison. There is a living room with a table, a couch, a piano and three small desks, a kitchen, a bathroom with a sink, and a separate toilet cubicle.

It was primarily designed to comfortably accommodate notable guests and for Gustave Eiffel to work on scientific experiments. But there is a wrap-around balcony!

Being a radio antenna tower, the Tour Eiffel was used as a transmitter during WWI between 1914-1918, to jam German radio communications and to hinder their advance.

While much of France was under German occupation, Paris remained a refuge for soldiers from the French and the Allied powers army units. The Eiffel tower thus remained safe. You can read more facts about Paris here.

It’s existence was under greater thread during WWII when Paris was fully occupied by German forces in 1940. Hitler visited Paris that same year, and wanted to hang a Nazi flag from the top. Unluckily for him, the tower’s lift cables were mysteriously cut right before he could do so.

Towards the end of the war, in 1944, as the Allies approached Paris, Hitler ordered the German General in charge of Paris to demolish the Eiffel tower and other parts of the city as part of their retreat. The General refused and the Eiffel Tower and Paris could finally breathe a huge sigh of relief after 4 long years under threat.

If you are feeling a bit peckish when you get to the top of the Eiffel Tower, never fear because there are 3 restaurants within the tower. (You might fear for your wallet however.)

For a snack, there is the Buffets one the 1st and 2nd floor which has snack food for the whole family. They also offer takeaway.

Then there is the Jules Verne (named after the famous French author) on the 2nd floor, which serves classics of gastronomical French cuisine. It is a Michelin-starred restaurant, so expect to be dressed appropriately.

And finally, right at the top, is a Bar à Champagne, which along with various types of champagne, also offers non-alcoholic drinks for those who are looking for a view without a tipple.

In winter time, there is a small ice skating rink installed on the 1st floor of Eiffel Tower, giving expansive views of the city.

You do have to pay to access the 1st floor, but once you get up there, access to rink, as well as ice skate rental, is free.

The Eiffel tower looks pretty stable, but it has a secret. It expands around 15cm (6inches) in the summer heat and contracts in the winter.

Not to worry though, Gustave Eiffel’s engineering has stood the test of time, and these adjustments were taken into account in its construction.

If you happen to be near the Eiffel Tower as the sun goes down, you will notice that lights go on every evening on the Eiffel Tower. There is usually a small light show once upon the hour, until past midnight.

However, you cannot a actually publish photos of the Eiffel tower lit up at night because it is illegal. The lighting is considered a copyrighted art installation, and thus belongs to the artist.

You have definitely seen the Eiffel Tower replica in Las Vegas, but have you seen the one in Shenzhen, China? There are over 50 different replicas and derivatives of the Eiffel Tower, including a pretty good facsimile in Paris, Texas, USA.

If you are wondering why the Iron Lady still looks so spritely after 100+ years, it is because it is regularly repainted. When it opened in 1889, the Eiffel Tower was a reddish-brown color. A few years later it was repainted in a yellow-brown color. In 1968, the powers-that-be finally selected a specially mixed “Eiffel Tower Brown” which is the color it is today.

Every seven years, a grand chantier takes place, using about 60 tonnes of paint to bring the Eiffel Tower back to its full glory.

17. Flying under the arch

Many an aviator has tried flying under the arches of the tower, not always successfully. In 1926 Leon Collet was killed after a failed attempt. In 1944, an American fighter pilot is believed to have passed under the Tower in his to chase down a German fighter plane.

The most recent attempt was in 1991, when a stunt-plane pilot on a Sunday at dawn.

In keeping with its world fair origins, French President Charles de Gaulle tried to arrange for the tower to be dismantled and relocated to Montreal for the World Expo 1967.  (This was part of his push to have French-speaking Quebec separate from the rest of Canada. Thankfully, neither event happened!)

If you enjoyed reading that article, you might enjoy reading more facts about Paris and France here.

French Weddings: 30 Traditions that will surprise