Skip to content
With discounts up to 20-40% in shop!
Get to know the Centre Pompidou in Paris, a fantastic modern art museum in the heart of the Marais. From its construction, famous artists' exhibits, and more. 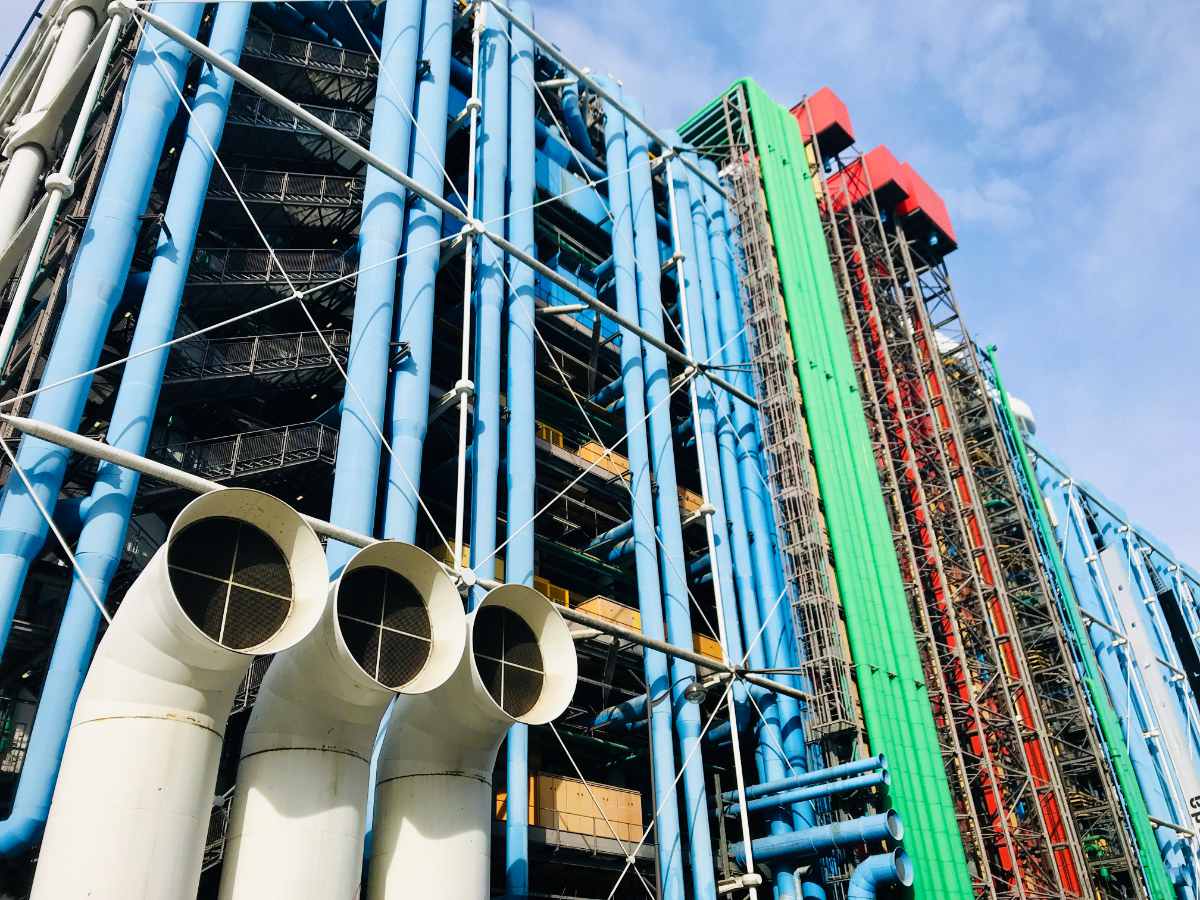 Modern art is not for everyone. There is an aesthetic and a bursting of new ideas that is to be appreciated in modern artworks, just as there were when audiences first gazed upon the finest paintings of yesteryear.

Today, the famous Centre Pompidou in the heart of the Marais in the 4th arrondissement of Paris is a must-see for modern art lovers, architects, and anyone who enjoys the avant garde.

It would not be presumptuous to say that Centre Pompidou is one of the most important museums of modern art in the world. Even if you are tempted to look at one of its exhibited paintings and insist that you can do that just as well.

If anything, modern art can make one question our own presumptions and ponder the creative process. So it is not for nothing that Centre Pompidou has become one of the most popular museums in Paris, with millions of tourists flocking to it every year.

The building itself is a piece of art as an ‘inside-out’ building, one of the first of its kind. It holds thousands of famous artworks from the 1970s onwards, from Andy Warhol to Lucien Freud.

So let’s get some facts about the Centre Pompidou and have a look at what is inside, shall we? Allons-y!

Centre Pompidou is named after Georges Pompidou, a former President of France from 1969 to 1974.

But the project was actually approved by President Charles de Gaulle in 1968, the year before Pompidou was elected. It was officially opened on 31 January 1977 by President Valéry Giscard d’Estaing.

The tradition of naming buildings after ex-presidents is not new in France, other buildings around Paris include:

2. Location in the center of Paris

The location chosen was in the historical center of Paris, in between the Place de la Bastille and the Louvre Museum.

It is just a few meters away from Les Halles, where the largest food and drink market in France once stood.

The food market has been replaced by a mall and a large train station, but this remains the geographical and historic center of Paris.

Former French president did not just arbitrarily manage to put his name on Centre Pompidou, he was actually a passionate advocate of modern art.

During his time as president of France, he also redecorated the official residence of the Presidency, the Palais de l’Elysées. Previously decorated in traditional gold ornate decorations (like in Château de Versailles), he imposed his modern style on the Elysée Palace.

His decor has still been maintained in a few of the rooms of the Palais de l’Elysée, to represent the former president.

4. The building’s design is the result of an architectural competition

The design of the building was decided based on a competition, where French and international architects were invited to compete.

With over 680 entries, a jury would decide to award the project to the British-Italian architectural team of Richard Rogers, Su Rogers, Renzo Piano, and Gianfranco Franchini.

The final result would be a distinctive design that is pretty much what you’d expect from a museum dedicated to modern art. With an eye-catching exterior, the inside of the Centre Pompidou is even better with an amazing atrium over several floors.

The Musée National d’Art Moderne actually predates the Centre Pompidou by several decades. It was imagined as early as 1929 by Auguste Perret and was officially decided by government in 1934.

Since then, it has been placed in the Petit Palais, the Musée du Jeu de Paume and Palais de Tokyo. Construction was interrupted due to the war, and the official inauguration didn’t take place until 1947 in Palais de Tokyo.

With the creation of the Centre Pompidou, the museum moved to its current location in 1977.

But the idea was not new. The museum actually succeeded the Musée du Luxembourg which established in 1818 by King Louis XVIII (husband of Marie-Antoinette) as the first museum of contemporary art created in Europe, devoted to living artists. The artists chosen were those whose work was due to join the Louvre Museum 10 years after their death.

Today the Musée du Luxembourg still exists in the Jardin du Luxembourg in the 6th arrondissement, next to France’s Senat. These days it features the history of the place, the Renaissance in Europe, the Palace in Paris, and other temporary exhibitions.

The Musée National d’Art Moderne in the Centre Pompidou is the second largest collection of contemporary art in the world, after the Museum of Modern Art (MoMA) in New York.

9. Made out of glass, steel and concrete

Unlike older buildings, the Centre Pompidou is uses a lot of concrete, steel and glass for a very modern structure:

10. All the building’s plumbing, electrics and air ducts are outside

More than just concrete and steel, the building is meant to be a work of modern art in itself.

One of the most interesting aspects of the design is that the pipes, ducts and other “internal organs” of the building are on the outside, rather than hidden behind its walls. The urban loft-style that is so popular these days, was not the case when Centre Pompidou was built in the 1970s.

There is a logic to the colorful pipes and tubes that you see on the outside of the building:

12. It is nicknamed the “Beaubourg”

Since its inception, it has been nicknamed the Beaubourg by Parisiens, because it is located in a neighborhood that was previously called the Plateau Beaubourg.

The name stems back to the 11th century, when this area was outside Paris. Taken over by farmers, this area soon became a booming town and was called “Beau bourg” as in “beautiful city”.

Today, you will find Rue Beaubourg just steps away from the Centre Pompidou.

Like the Eiffel Tower and the glass triangle in the Louvre Museum, Parisiens hated the Centre Pompidou when it was first built.

Unlike the Eiffel tower and the glass triangle, the Centre Pompidou still stirs up much debate. Many locals feel it doesn’t keep with the historic nature of the area and beautiful 18th century Hausmannian buildings that surround it. Nonetheless, the Centre Pompidou is here to stay.

The Centre Pompidou is very large, covering over 5 acres of land in a central city block. It has 7 above-ground floors of steel and glass, as well as 3 underground floors.

Today, the Musée National d’Art Moderne inside the Centre Pompidou holds more than 100,000 pieces of art, with only a small percentage of that on display.

There is so much artwork that temporary exhibitions are renewed every two years to bring out different pieces or modern and contemporary art so that there is always something new to discover.

16. Famous artists who have exhibited here

Some of the famous artists who have had their works exhibited here include:

There are two big libraries inside the Centre Pompidou. The largest is the Public Information Library has a collection of almost 500,000 books which are accessible to the public, and free of charge.

The 2nd library is the Kandinsky library which focuses on the research and documentation, holding more than 18,000 printed works by 20th and 21st century artists. It is only open to researchers with appropriate credentials.

On the roof of the Centre Pompidou restaurant, is the luxurious George restaurant offering breathtaking views of Paris.

Enjoy a gourmet entrée, plats and dessert in the glass-covered restaurant, or outside on its wonderful terrasse, with views of the Eiffel Tower, Notre Dame de Paris, and more.

Just outside the Centre Pompidou is the the Stravinsky fountain located in Place Stravinsky. It is also sometimes called the Fontaine des automates, and is certainly in keeping with the modern-art theme.

It was built in 1983 and features 16 colorful water-spraying sculptures by Jean Tinguely and Niki de Saint-Phalle. The eclectic designs are intended to represent the works by Russian composer Igor Stravinsky and include:

20. IRCAM: Institute for Research and Coordination in Acoustics/Music

Under the auspices of the Centre Pompidou is the IRCAM, which is actually located underground and in the brown building next door. It is the largest public research center in France dedicated to both musical expression and scientific research.

Much of the institute is located underground, beneath the Stravinsky fountain to the east of the buildings.

21. One of the most visited museums in Paris

We may think of Paris as a classically traditional city, but the modern art museum at the Centre Pompidou is one of the most visited museums in Paris with around 5 million visitors per year.

22. Tourists used to ride the escalators for free

Until the 1997-2000 renovation, only the modern art museum required a ticket. Tourists would ride the escalators outside the building for free, to look at the rooftop views of Paris.

23. Other Branches in Metz and around France

Similar to the Louvre Museum having a branch in the city of Lens, the Centre Pompidou has one in Metz in the north of France. Other potential branches that are in the works are in Chaumont, Libourne, Maubeuge, and Massy.

24. Centre Pompidou outside of France

There are several smaller branches of the Centre Pompidou outside of France that are in the works, including:

On the ground floor of the Centre Pompidou you will find a large gift shop.

There are all sorts of modern art-inspired gifts available for sale there so if you are looking for something special, do make some time to stop by.

Now, if you are hoping to visit the Centre Pompidou in Paris, you may want to hurry. Recently, France’s culture minister announced that the Centre would close completely for renovations in 2023 for four years. It is expected to cost around €230 million.

If you are planning to visit the Centre Pompidou, you can book your skip-the-line tickets here. And if you want to learn more about visiting Paris, you may enjoy reading more about top things to do in Paris.

21 Marie-Antoinette facts: Did she say “Let them eat cake”?