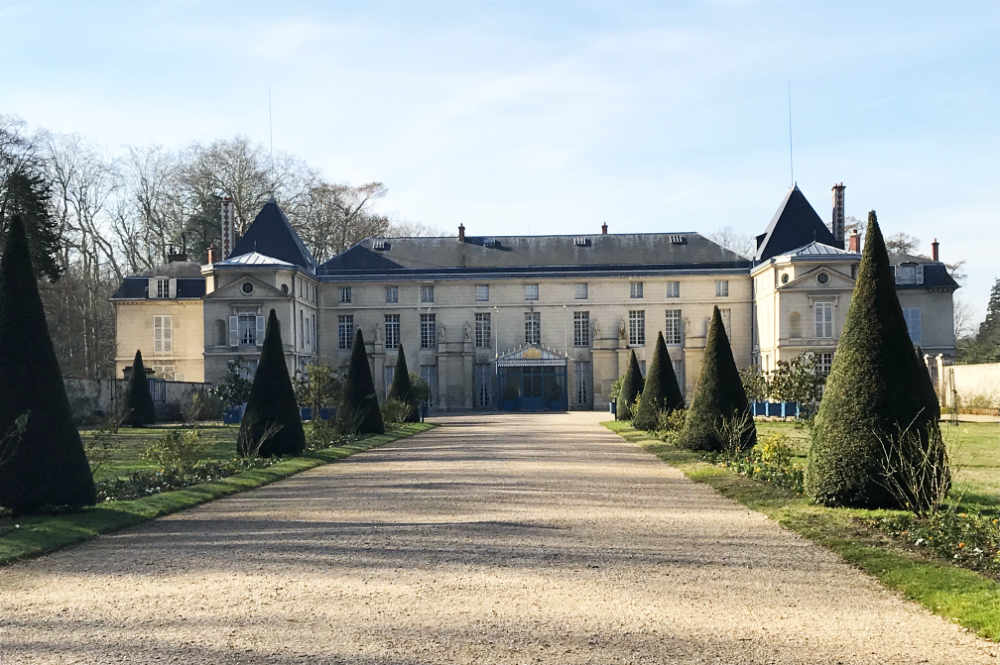 If you have small children like I do, visiting Chateau Malmaison is perfect. Not too big, not too crowded, not too many stairs.

It was at one time however, the home of an Empress. Josephine, the wife of Napoleon Bonaparte, adored this “cozy” little château. She bought it while he was away fighting his wars, and set about renovating and refurnishing it.

Rueil Malmaison, the town where the Chateau is located, is today a bustling city center with many businesses and shops nearby. It is on the famous RER A , on the west side of Paris, near La Defense, and so a major hub for attracting large corporations and families looking for a quick commute to work.

Around Chateau Malmaison however, you can imagine another time. The Château is slightly away from the town center, and surrounded by high walls and parkland. (There is however a parking lot!)

While Josephine might have been an Empress, the property itself was owned by several bourgeois families before she purchased it. Wealthy, but not from the nobility, like Josephine herself.

She purchased the house in 1799, while Napoleon, still only a general in the army, was off fighting in Egypt. It was towards the end of the Reign of Terror and the French Revolution, which had started in 1789, and things were finally starting to calm down in France.

But Napoleon was not pleased. The property was far more than he wanted to spend. Nevertheless, the couple set about renovating it, and made it their home.

Josephine’s daughter Hortense (from a previous marriage) would later say that it was their “delicious spot”. As well as renovating the interior, Josephine also cultivated an extensive garden. A lover of greenery and roses, she also added a heated orangery to house many exotic plants that Napoleon brought back from his travels.

But the real world was to intrude. Four years later, in 1804, Napoleon was voted Emperor, making Josephine his Empress. Caught up in politics and his notorious affairs with other women, the couple separated. Napoleon’s desire to have biological children combined with Josephine’s inability to conceive again, the couple divorced.

As part of the settlement, Josephine received Malmaison and an annual pension of 5 million francs. She continued to enjoy the home until her death in 1814. A year later, Napoleon returned to the house after his defeat at the Battle of Waterloo(1815), before being exiled to the island of Saint Helena.

Josephine’s son Eugene (from a previous marriage) inherited the Château from his mother, but he died at 42 and his German widow soon sold it. In 1842 another Queen, Maria Christina widow of King Ferdinand VII of Spain purchased the property. She later sold the property to Napoleon III, Napoleon Bonaparte’s nephew, who preserved the property as best he could.

He had the Franco-Prussian war to deal with, however, and in 1870 the invading Prussian army ransacked the interior. After the French army took it back, and they set up a base at the Château. This protected it to a certain extent, although military soldiers are not exactly known for their prowess in preserving antiques!

The Château was finally fully restored at the start of the 20th century and returned to its former glory.

Today, the Château pays tribute to its most famous residents, with the Napoleonic National Museum. The museum holds a lot of personal items belonging to Napoleon and Josephine, tries to put a human face to the facts that we know from history.

If you have visited some of the other Châteaux around Paris, such as Fontainebleau, Versailles, or Chantilly, you will see that Malmaison does not have the same level of grandeur.

It looks very much like a home, granted a very grand home. There is a library, a music room, their bedrooms and more. A lot of the original furniture has been retained, giving a sense of their daily lives.

How to get to Chateau Malmaison from Paris

So I will be honest, you could take the train RER A from Paris and then Bus 258 to get to the Château. But depending on where you are traveling from, you will probably spend more time in transport than you will in the Château. It is about a 30-minute walk from the RER station, and around 25 minutes by bus.

An alternative is to drive, as there is a parking lot right across from the Château, especially if you are coming with any afore-mentioned toddlers (who may or may not be little hellions).

The town of Rueil-Malmaison

If you do choose to take the train, head over afterwards to the pedestrian town center of Rueil Malmaison (around 10-minute walk). The town center is utterly charming with its cobblestone streets and old buildings. There are plenty of terrasses to people watch, a historic church and a mairie (townhall). Trust me, you will be sad if you went all the way to Rueil Malmaison and missed it.

If you have brought the car, there is a large underground parking, under the town square, which has reasonable rates.

Being one of the smaller museums, the Chateau is not open all-day everyday like the Louvre. It is also often closed for special events. It is also closed at lunchtime, between 12:30-1:30pm so you have to properly plan your visit to go in the morning or the afternoon.

At the time of our visit, prices were between €5-6.50, with free admission for EU residents under 26.

Are you planning a trip to Château Malmaison, or have you already been? Comment below and let me know!

Quiz: Which French Royal Family Member are you?

Visit Palace of Versailles from Paris: History of Opulence and Downfall