Skip to content
With discounts up to 20-40% in shop!
If you are spending a few days in Paris, here are the best day trips from Paris, France. From luxurious palaces to ancient chateaux, champagne tasting, D-day beaches and much more.
(As an Amazon affiliate, we may earn commissions for certain purchases. Please note, all information is provided for entertainment purposes only. See our disclosure policy for details.)

There is never enough time to see everything in Paris. It is one of those cities with a gazillion nooks and crannies, and no one (even people living here) can cover it all. And so, on top of all that, I will add to your “to-see” list by noting some fantastic day trips from Paris that you must absolutely squeeze in some time for!

Now one thing I will note is my criteria for a good day trip from Paris:

I have seen a lot of websites that suggest large cities like Strasbourg or Bordeaux as day trips from Paris, and for me that is slightly nuts.

There is so much to see in Strasbourg and Alsace that just because you can go there in 2 hours (by high-speed train), doesn’t mean that you actually should. Instead, I would recommend staying overnight to truly experience it. Indeed, there is so much to see and do in Alsace, you are better off spending the week there!

Certain places just require more time, and so I’ve left those off of the list. We’re looking for practical places to visit, where it makes sense to go as a day trip, rather than stay in the area. So let’s get to it, shall we? Allons-y!

One of the most beautiful and unique sights in the world, Mont Saint Michel is a sight to behold. Legend has it that the archangel Michael appeared to St. Aubert of Avranches in 708 and instructed him to build a church on a large rock.

Surrounded by marshland that turns the UNESCO World heritage sight into an island when the tide comes in.

It is a bit of an adventure though, so this one day trip that I would strongly recommend going with a tour company. You can read more about visiting Mont Saint Michel here.

The rise of the palace of the Sun King Louis XIV, followed by the eventual fall of his dynasty, the Palace of Versailles is a place filled with history and tinged with sadness.

You can just imagine Marie Antoinette walking through the famous Hall of Mirrors and the Petit Trianon, her private sanctuary.

Just outside the city, Versailles is a wonderful day trip from Paris. It does get quite crowded in the summer time though, so go early in the day to give yourself time to explore before the crowds arrive.

You can read more about visiting the Château de Versailles here, and find tour companies to guide you through the palace in style.

If you are traveling with a family (and even if you are not) you cannot miss going to the Chateau of Mickey. Disneyland Paris actually is much cheaper, compared to other Disneylands in the U.S., Japan, and elsewhere.

The park is split into two parts: Disneyland Park and Walt Disney Studios. You can buy tickets for both parks, or just one.

There is also the Disney Village which is outside the theme parks and free to visit. Like with most things around Paris, it is best to skip the line and buy tickets and transportation in advance.

Even if you don’t like art, you will enjoy the trip out to idyllic Giverny and the French countryside. It is about 70 km northwest of Paris, but like stepping into another world.

This was the sanctuary of Impressionist artist Claude Monet. You can visit his home, his famous gardens, as well as the Museum of Impressionism which holds some of his works and other impressionists from that era.

You can find tour companies that take you from Paris and stop at Giverny, providing a relaxing lunch along the way.

Further away from Paris than Versailles, Fontainebleau was originally constructed as a hunting lodge. Today it houses two exhibitions, both on larger-than-life French Kings: François I and Napoleon Bonaparte.

You can read more about Château de Fontainebleau here, and find recommended tours from Paris.

If you were a fan of the comic books growing up, you cannot miss Parc Asterix. Located in North of Paris, Asterix and Obelix are here to give that foreign interlocutor Mickey Mouse a run for his money.

The story is set in 50 BC when the dastardly Roman Empire has invaded France. Asterix and Obelix cheerfully fight a good fight though, to keep them at bay. The theme park is set up in a way to cover all the areas that our two heroes have their adventures.

This is the French alternative to Disney, and definitely worth a day trip from Paris. You can read more about visiting Parc Asterix here, as well as transportation options from Paris.

Situated in the North of Paris, Château de Chantilly is an architectural marvel. It is actually built in the 11th century on marshland to protect the road to Senlis, the ancient city of the French Kings.

It was also the home of the son of the last King of France, Henri d’Orleans who dedicated his life to it restoring and preserving it.

Inside the Château is the 2nd largest collection of antique paintings in France, after the Louvre Museum in Paris. In addition, the Château’s library holds over 60,000 volumes, second only to the National Library of France.

Amongst its treasures are over 1,500 manuscripts and 17,500 printed documents on all sorts of subjects, dating from as early as the 11th century.

You can read more about visiting Château de Chantilly here and see tour and transportation options from Paris.

It is lucky that the Loire Valley is about 2.5 hours away from Paris (by car), because that meant many of its luxurious renaissance châteaux were saved from the destruction of the French Revolution.

Chateau de Chenonceau and Chambord are two of its most famous. The beautiful city of Amboise has its own Royal Château that you shouldn’t miss.

In addition, the Loire Valley is a wine-producing region, so there are many popular white wines that are grown in the region, which you can read about here. The area is the second-largest concentration of sparkling-wine producing vines in France after the Champagne region.

And since they don’t build train stations next to castles, I would highly recommend taking a tour from Paris. There are several tours that combine wine-tasting and château-hopping as a day trip, or longer if you choose. You can see Loire Valley tour options here.

If you enjoy Champagne (who doesn’t), then a champagne tasting tour from Paris should definitely be on your “to-do” list. There are several different types of champagne, so this is your chance to try a few different varieties.

In addition, the capital of the Champagne Region, Reims is most famous for its gothic Cathedral and the place where the Kings of France were crowned.

A bit of culture, a bit of Champagne, and a designated driver. Who could ask for anything more?

There is a lot to see in Normandy, but if you are short on time and want to pay your respects to the soldiers who fought so bravely on D-Day, a day trip from Paris is quite do-able.

There are many cemeteries, monuments, and museums dedicated to the lives of those soldiers and those living in France at the time. A somber journey, but one that is worth the trip.

Located in the South west suburb of Yveline, outside of Paris, Château of Breteuil tries to entertain as well as provide a sense of history.

If you have small children, a visit to the château is a must. You can read more about visiting Château de Breteuil here.

If you are wondering how to squeeze all these day trips in, in a limited amount of time, the France Miniature theme park outside of Paris, may be the one you want. The most beautiful French cities, attractions all monuments, all replicated and miniaturized to 1/30th the size.

It is the biggest miniature park of its kind in Europe, spanning over 5 hectares, laid out in the topography of France from north to south.

Small buildings built with care, with tiny details that have been exquisitely added to make you feel like you are looking at the real thing. You can read more about visiting France Miniature here.

Étretat in Normandy is one of those places that is very famous in France, but quite unknown to foreigners and tourists.

A small town on the north coast of France, the area is known for the striking rock formations known as falaises in French, that carved out of its white cliffs.

With award-winning gardens, beautiful seashore, and a charming old town, there is plenty to see and do in Etretat. You can read more about visiting Etretat here, and find out about tour options from Paris.

About an hour away from Paris by train, Provins is an ancient fortress town that is so well preserved, it has been inscribed on UNESCO’s world heritage list.

This medieval town is best known these days for its famous “rose de provins”, which is used to make all kinds of rose confectionary.

There are also plenty of towers, ramparts, and dungeons to visit, along with a pedestrianized town center. You can read more about visiting Provins here.

So what are your favorite day trips from Paris that you would love to recommend? If you enjoyed reading that article, you may want to read more about things to do in Paris. 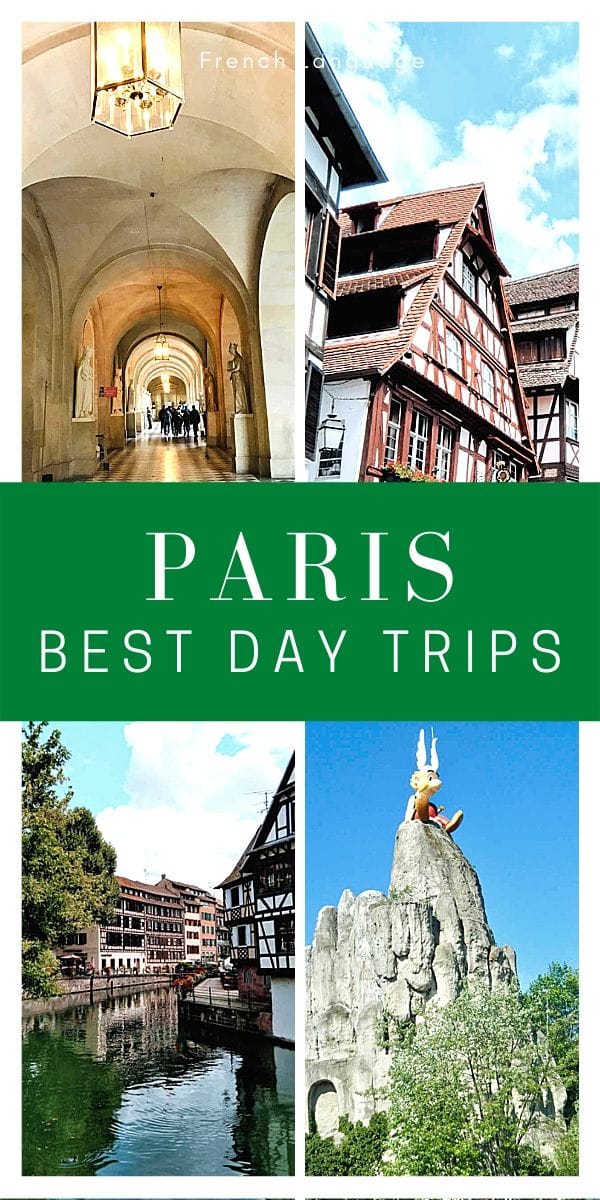 Château de Breteuil: The Castle of Old Fairytales (outside Paris)