Skip to content
With discounts up to 20-40% in shop!
Mont Saint Michel in France is a stunning UNESCO world heritage monument that attracts millions of visitors every year. But it has an ugly side. Get the unvarnished guide on its history and politics, as well as tips from locals to make the most of your visit.
(As an Amazon affiliate, we may earn commissions for certain purchases. Please note, all information is provided for entertainment purposes only. See our disclosure policy for details.)

Our guide covers the truth about its history, politics, and tips for your visit to Mont Saint Michel, whether you are heading on a day trip from Paris, or travelling around Normandy for a longer period of time.

Why is it famous?

If you’ve never heard of Mont Saint Michel, it is a medieval monastery perched on a giant rock in between the coast of Brittany and Normandy. Both regions have laid claim, and for the moment, the town is deemed to be in Normandy.

The fortified town is about 280km (175 miles) from Paris and is surrounded by marshlands. Famously, when the tide comes in, the Mont turns into an island about twice a day which is definitely a sight to behold.

It is one of France’s most-visited monuments, and the top attraction after the Palace of Versailles, outside of Paris. And therein lies the problem.

That is not to say you shouldn’t go (and I’ll give you some tips later for your visit), but it is always more interesting to look at the history and behind the scenes, instead of just oohing and ahhing over the surface.

In the 10th century, the Benedictine Monks settled here and the site had become a destination for pilgrims from across Europe.  The French and English Kings continued to fight over the Mont (and the entire region), including during the Hundred Years’ War and the French Wars of Religion.

Only seven monks were living there when it was dissolved during the French Revolution in 1789. It became a state prison under Napoleon I and remained a prison until 1863.

Finally, in 1874 Mont Saint Michel was declared a historic monument and a UNESCO World Heritage Site since 1979.

Now that we have the history out of the way, we can get to the controversies. You may have noticed that even as early as 1789, only seven monks were living there.

Today, there are around 5 monks and 7 nuns. In fact, the entire population is only approximately 25-30 people who actually live at Mont Saint Michel.

So what is going on? The truth of the matter is that Mont Saint Michel is a big business. With 3 million people visiting it annually, it is not so much a spiritual holy monastery, but rather a tourist theme park.

In fact, about 80% of the restaurants, hotels and shops on Mont Saint Michel are actually owned by just 2 people. Both inherited properties from their parents and grandparents.

It is a closed group of families who have been controlling the property for centuries, not the monks at all. Sales of the remaining 20% of properties are rare, and if they do come up for sale, it is sold within that closed circle.

So when you visit, if you like to wander from shop to shop looking for the best bargain souvenirs, or comparing restaurants, you are wasting your time. It’s actually all owned by the same owner.

It gets worse. Although there are only 25-30 people living on the Mont, it does have the status of a town, holding elections and having a mayor. So for years, the owner of the largest chunk of the Mont was actually the mayor.

As mayor, he had a great idea. In the name of “ecology”, he decided that cars should no longer approach the Mont, but rather should be parked about 3 miles away (with a system of shuttlebuses driving visitors over).

But that paid parking lot was placed right in the middle of empty land that he already owned. Suffice it to say he was found guilty by the justice and required to pay a fine of 10,000 euros for conflict on interest. Pocket-change given that just 1 night in one of his 3-star hotels costs close to €400.

So keep in mind while you are visiting that this is, for better or worse, a bit of a tourist trap. Everything is expensive, and not necessarily of the best quality.

But that is not to say you shouldn’t visit, just that you shouldn’t be expecting an authentic French village. Most of the servers and shopkeepers are actually just employees living in other towns, coming in to do their jobs.

With that being said, here are a few tips if you do plan to visit, to make the most of your trip:

1. Go to the Abbey early

The Abbey gets quite busy as the day wears on and more tourists arrive on day trips. So arrive early and make your way directly to the Abbey. You can get a tour of the monument for around 10 euros. Audio guides are also available. After the abbey, wander along the ramparts and duck into the little churches and gardens that you see along the narrow paths of the village.

After the Abbey, the path back to the main part of the village takes you along the ramparts. Admire the views across the bay, because it is definitely a sight to behold.

The main part of the village is filled with souvenir shops and small restaurants. Stop by the famous Mère Poulard restaurant and gift shop. The restaurant is famous for its Omelette de la Mère Poulard, a giant omelet several inches thick that is cooked over an open fire.

It gets cold and windy on the rock. Unless you are visting in the middle of August, take a sweater and a warm waterproof jacket as it also rains there a lot. There are many stairs made of slippery cobblestones, so wear good shoes.

5. Prepare for rain and mud

Even without rain, Mont Saint Michel is surrounded by marshland. So if the tide is out, you will want to walk off the path a bit, which can be a bit “spongy”.

6. Leave the stroller at home (and the children as well)

Mont Saint Michel is not a place for strollers or wheelchairs. There are many steps and even the walking paths are made of narrow cobblestone.

I’ve been twice and lucky enough to have been able to leave the children with their grandparents. This place is definitely not very toddler-friendly. They don’t put elevators and baby-change tables in world heritage buildings, you know!

☞ READ MORE: Why French Parents vacation without their children

7. Check the schedule for the tides

The tides rise and fall daily, turning the Mont into an island. At low tide, it is lovely to walk around the Mont and see if from different angles, At high tide though, the glassy reflection of the Mont is just breathtaking.

If you do want to walk around the Mont, you might want to take a tour so that you don’t get caught on the marshlands with the tide coming in.

There are a lot of tourists, especially in the high season, so the restaurants are packed. Consider eating before or after the rush-hour to get a good table with a vies of the bay.

If you like seafood, the area is famous for its moules frites (mussels and fries). You could also bring your own sandwiches, and picnic on the ramparts. You can read more about foods and drinks in Normandy here.

How do you get there?

It takes about 4 hours from Paris, so a day trip is possible. You can take the train from Paris’ Gare Montparnasse to the city Rennes (2 hours), from where SNCF buses travel to Mont St. Michel (1.5hrs). You can buy a combined ticket on the SNCF website.

Alternatively, there are many tour companies that will drive you back and forth (full day-14 hours) and take care of all the arrangements.

How long will you need there?

As I mentioned above, cars and buses are no longer able to arrive at the foot of the Mont, but rather a parking 3 miles away. This means you have to wait either a shuttlebus or walk. Shuttles run often, but that depends on the crowds, so do take that into account when planning.

On the Mont itself, I would recommend around 3-4 hours (excluding food) but again, depending on the crowds, you might be waiting for a while in line to visit the abbey.

When is the best time to visit?

If you can avoid July and August, I suggest doing so as it gets very crowded. I would also recommend trying to get there as early as possible during the day, even if the off-season. The Mont tends to get more crowded towards the afternoon, as more busloads of tourists on day-trips.

If you can spend overnight in Saint Malo or Rennes and then drive over in the morning, I would recommend doing so.

Can you stay overnight?

Yes, there are several hotels although they can be expensive in the busy season. You can also consider staying in a larger town nearby, such as Saint-Malo or Rennes.

☞ READ MORE: The Guide to Visit Rennes: Do you speak Breton?

So have I made you look at Mont Saint Michel differently? Do you still plan to visit? Comment below and let me know! 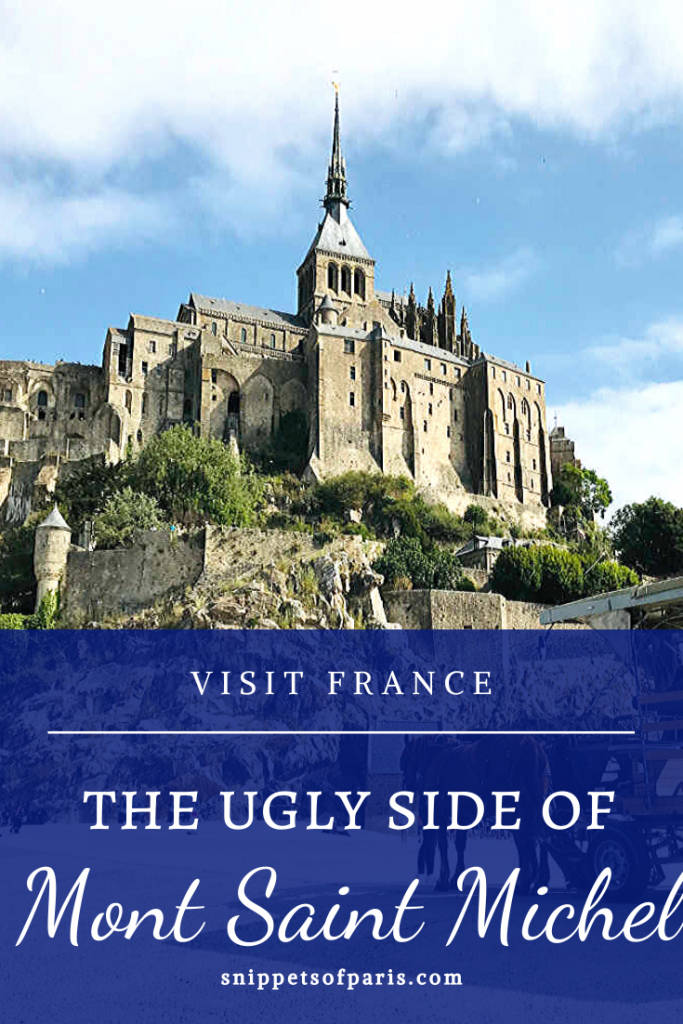 8 Best Things to do in Cognac, France (besides drinking!)

France in Winter: 10 Places to Visit when it is cold (Brr!)

No 911: Decoding the 11 French Emergency numbers