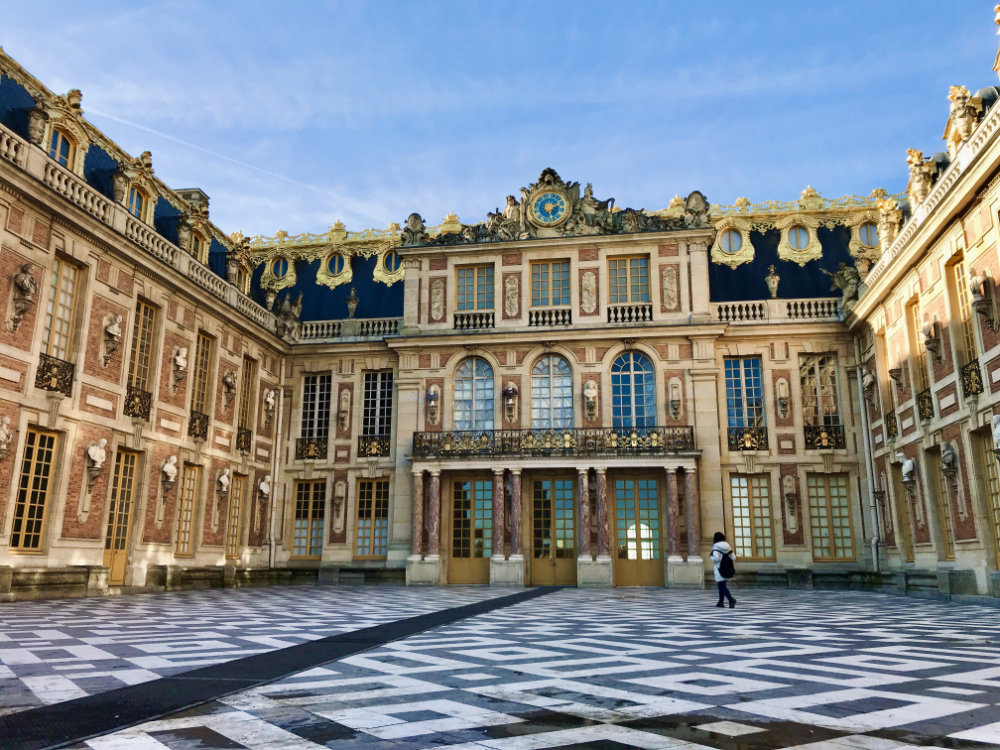 Even before you visit the Palace of Versailles (about 1/2 hour from Paris), you know that you will be walking into a world of splendor. Gold plated chandeliers, powdered wigs, extravagant antiques, silk ballgowns, it all hints at an opulence that we don’t see any more these days.

And there’s a good reason for that. The construction of the Palace of Versailles, its subsequent upkeep and profligacy all directly led to the fall of the Royal House of France. Marie-Antoinette may have been its most famous resident, but the seeds of discontent were sown long before her arrival.

This guide covers its history, what is there to see inside the palace and in the gardens, tips for visiting, how to get there, and more.

It was actually the Sun King’s dad, Louis XIII, who bought the property at Versailles. At the time it was a hunting lodge, a couple of hours away from Paris by horse. At the age of 5, young Louis became King, with his mother Anne as Regent.

It was a tumultuous time known as the Fronde, with nobles at the time contesting Anne. At one point, the 12-year old Louis and his mother were held prisoner at Palais Royale in Paris (the palace next to the Louvre) until they conceded to the demands of the frondeurs.

This made Louis detest and distrust Paris. At 21, in 1661 young Louis reached his majority, and started to make a few decisions. He immediately looked for a new power base, and settled on the family’s old hunting lodge: Versailles.

The location was far enough away from Paris that the nobles of the land would have to stay overnight at Versailles, rather than returning to their own homes in Paris. Construction began immediately on a grand scale, adding several wings, new apartments, and new buildings to house the royal court, its servants, and all their hangers-ons.

But Louis was not a kind taskmaster. Workers were expendable if it meant that he could expand bigger, higher, and faster. Thousands of workers died to build the palace (link in French). There was no such thing as workers’ rights.

☞ READ MORE: Strikes in France: Should everyone protest like the French?

And while work continued for several decades, the Royal court based itself in Versailles, in the middle of a construction zone. At the time there was no running water, no private rooms for the lords and ladies, and comfort at a minimal. The place also stank, since bathing was not common. To get a good room, you were dependent on being in the Sun King’s good graces. Versailles was not a pleasant place to be.

Along with other restrictions, Louis XIV imposed a strict dress code, insisting on the finest materials. This meant that all the nobles of the land spent their money on outfits, bankrupting themselves, instead of being able to pay soldiers to cause trouble. Louis’s plan was worked, and France became the capital of fashion and culture.

Versailles was the capital of elegance by the time Austrian Marie-Antoinette married his great-great grandson Louis XVI, more than 200 years later. But France was slowly going bankrupt.

Louis XVI (16th) had expended a lot of money helping the American Revolutionaries fight their mutual arch-enemy, the British. He tried to impose even more taxes on the poor to raise money.

But for him, the distance from Paris which once was an advantage for the Château de Versailles, was now a drawback. Such extravagant opulence far from the lives of starving Parisians raised their ire.

On 5 October 1789, the French people marched to Versailles, and made the Royal Family return to Paris as their prisoners. The King, Queen, and their children would never return.

iii) After the French Revolution

Unlike other palaces that were destroyed during the revolution, the Palace of Versailles was merely ransacked. The valuables were transferred to the Louvre Museum, and other royal property was sold at auction, where foreign kings and lords snapped it up. Today, you can see some of those pieces at Buckingham Palace or Windsor Castle, and as far away as the Hermitage museum in Russia.

By the time Napoleon Bonaparte became Emperor in 1804, the palace was in bad shape. Napoleon made the Château de Fontainebleau his base instead, distancing himself from the excesses of the previous royal house.

When the monarchy was restored in 1830 following Napoleon’s downfall, the new King Louis-Philippe started to restore Versailles and turn it into a museum.

Relief for the Château was short-lived. The Prussian army turned the Palace into its headquarters during the Siege of Paris in 1870, and turned the Hall of Mirrors into a hospital.

When the war ended, the Government of France would build their Assemblée Nationale (House of Commons) in the building.

Since its construction, Versailles has become a symbol of France and the location of many important events in world history:

Thankfully the eye-for-an-eye cycle did not continue, and the surrender of Germany declaring the end of World War II was signed in Reims in France and not Versailles.

Versailles remains an official government building with the Congrés of Versailles still being held in the Salle de Congrès. During these occasions, the President of France addresses both houses of Parliament, the Assemblée Nationale (House of Commons) and the Sénat. This is similar to the Queen’s speech in the United Kingdom and the State of the Union in the United States.

In addition, the president of France’s Assemblée Nationale still has apartments for use at Versailles, along with his official apartments in Paris.

☞ READ MORE: Quiz: Which member of the French Royal Family are you?

Since millions of people come to Versailles each year, the château recently underwent a large renovation to improve access. Visitors have to follow a set circuit that starts in a large corridor lined with statues. This leads to a large staircase to take you up to the 1st floor (2nd floor in North America).

Once upstairs, you start in a series of rooms for special exhibitions. When I went in November 2019, the exhibition featured a series of paintings of life at Versailles, along with its famous inhabitants.

From there it was on to the Royal Apartments. A lot of the furniture has been restored at Versailles, as the Château continues to remain a site of rehabilitation. From there, it is off to the most famous room in Versailles, the Hall of Mirrors.

There is also the Royal Chapel, the Royal Opera house and the aforementioned Salle de Congrès, although those are not open to visitors.

The gardens at Versailles are huge. I’ve been to Versailles several times, and never managed to see everything in one visit. If you are determined to cover all your bases, I suggest going early and wear good walking shoes.

a) Canal and the Fountains

Andre le Notre designed an elaborate system of hydraulics and canals to bring running water to the Château. The Grand Canal designed by Le Notre is over 1 mile long, and you can even go boating on it. This engineering marvel still exists to this day and continues to power the elaborate fountains.

The Petit Trianon is a small château within the gardens of the Palace of Versailles. It was commissioned by Louis XV for his mistress Madame de Pompadour. When she died, he simply gave it over to her successor, Madame du Barry.

Marie-Antoinette took it over in her time and used it as an escape from the stifling condition in the main Château. It fell into disrepair after the Revolution but was restored by Napoleon’s sister Pauline.

Today the Petit Trianon is open to the public and can be rented for special functions (bring your credit card).

The “Hameau de la Reine,” was Marie Antoinette’s contribution to Versailles. It was basically a small village with its own farmhouse and dairy mill with cows, hens and sheep. Of course it also came with a staff of hired “peasants” to take care of it all.

Approximately 10 million people visit Château de Versailles every year, not just because it is beautiful, but also because it is one of the easiest to get to from Paris. Just hop on RER C anywhere in Paris. If you’re not sure where, there are several RER C stations, among them Champs de Mars (Tour Eiffel), Invalides, and Notre Dame.

Take the train in the direction of Saint Quentin-en-Yvelines (South) and get down at Versailles Château – Rive Gauche train station. From here it is a mere 10 minutes’ walk to the Palace, just follow the tourists.

Alternatively, if you would prefer a guided tour from Paris, here are a few options. I would especially recommend this if you are visiting in the summer, as the Palace gets very crowded, and the tour groups are able to skip-the-line.

In summer months, the Château is packed. Buy your tickets online in advance and arrive early. There is no airconditioning, so if you can avoid the afternoons, do so.

2. Accessibility inside the Palace

Strollers are not allowed inside the Château, but you are free to leave them in a locker at the entrance and recuperate them before heading over to the gardens.

When we went the elevators inside the Château were blocked, so be prepared to take the stairs. I did see people in wheelchairs though, so you may need to ask for special assistance.

There is a Michelin starred restaurant inside the Château, as well as a café where you can either bring your own food (very practical when traveling with small children), or buy from the counter. There is also a beautiful teahouse in the gardens, but if your little revolutionaries are tired from walking in the Palace, they are not going to want to trek all the way to the teahouse.

Another point about visiting the gardens is that unless you are going in the middle of summer, it tends to be quite cold. Paris is often quite rainy so bring a warm waterproof jacket.

So what do you think, is all the splendor of Versailles worth all that it cost France and her people? The tumultuous events that occurred here cost a lot of lives and heartache. Will you look at it differently when you visit?