Skip to content
With discounts up to 20-40% in shop!
(As an Amazon affiliate, we may earn commissions from qualifying purchases. Please see our disclosure policy.)

The historic city of Reims was at one time one of the most important cities in France. It used to be the traditional site of the coronations of French Royalty, and was known as “City of Kings”.

Found by the Gauls at the time of the Roman Empire (see the Asterix & Obelix comics), it was the place where Clovis, deemed the first King of the Franks, was anointed monarch. Christianity had come to the area, brought by St. Rémi who baptized Clovis here at the end of the 5th century, and after whom the city was named.

Reims (pronounced “ra-nces” with nasally “n”) was one of the main flashpoints for the 100 Years War with the English in the Middle Ages.  Joan of Arc was sent to free the city from the English to allow Charles VII  to be crowned king here.

The city survived the upheaval of the French Revolution, but it would not be so lucky during World War I. German soldiers invaded the city, and with French and Allied bombs falling, more than 70% of the city was destroyed. Reims was now considered a “martyr” to the war, one of the most battered cities in France.

The rebuilding started as soon as the war ended, thanks to rich American donors like John D. Rockefeller and Andrew Carnegie.

The city was invaded again by the Germans during World War II. The surrender of the German army took place in Reims in a room of a nearby school, today called Roosevelt high school, on May 7th 1945.

The Reims Cathedral was one of the buildings substantially destroyed during World War I, which had to be almost entirely rebuilt. A large donation from John D. Rockefeller was able to restore the Cathedral to what we see today.

When you walk through the cathedral, you can’t help but remark upon its extraordinary history. All around the exterior and interior facades, there are giant size statues of French Kings and saints.

Only a handful of the French Monarchs were not crowned here, including Napoleon Bonaparte who decided to be crowned at Notre Dame de Paris. His successor Louis XVIII also tried to dispense with the tradition, after the guillotine of his uncle Louis XVI and Marie Antoinette.

The last coronation here was 1825 of Charles X, who was quite unpopular and shortly overthrown after.

The building today is an inspiration for the reconstruction of Notre Dame de Paris which was also significantly damaged after a large fire in 2019.

The big attraction in Champagne is of course the world-famous houses of champagne. Only sparkling wines that are from the region of Champagne are allowed to be called “Champagne AOC”.

The allure of the name comes from a monk named Dom Perignon in the 17th century, who came up with the idea of matching grapes together to make his sparkling wine (as opposed to putting random grapes together). This elevated the brand to what it is today, even though there are other sparkling wines across France that are older.

You can find out more about the different types of champagne here.

Just across from the Reims Cathedral is the Palais du Tau, the former residence of the Bishops of Reims. It also has served as a place for royalty to host banquets, including the ones just after the coronation.

You can visit the palace, which today is a museum housing many tapestries, statues and most impressively a treasury with several gold and gold plated religious artifacts.

Dating back to the 3rd century is a Gallo-Roman “Arc de Triomphe” dedicated to Mars, the Roman God of War. It is the only surviving arch of the four monumental arches erected at, what was then, the walls to the city.

Reims has a charming city center, with many small shops and wine stores selling all sorts of liquors and champagnes. Visit the local market at Halles du Boulingrin in art-deco style and then make your way to Place Royale in its neoclassical style that honors King Louis XV.

You can also visit Bibliothèque Carnegie, the library donated by American philanthropist Andrew Carnegie who donated it after WWI.

How to get to Reims?

You can get to Reims on a high-speed TGV train from Paris in about 45 minutes. The train arrives directly in town from where you can walk to all the major attractions. However, if you want to visit the champagne vineyards, you will need a car.

It takes about 1hr20 by car to get to Reims from Paris, so it is quite possible to do it as a day trip. You can also take a tour from Paris that will organize the sightseeing and the visit to the champagne houses for you.

If you have the time, I would recommend spending at least 1 night in Reims. This way you can spend some time enjoying the night-time atmosphere of the city (with perhaps a bottle of champagne?)

You can check out my article for more day trip ideas from Paris here. Bon voyage and à bientôt! 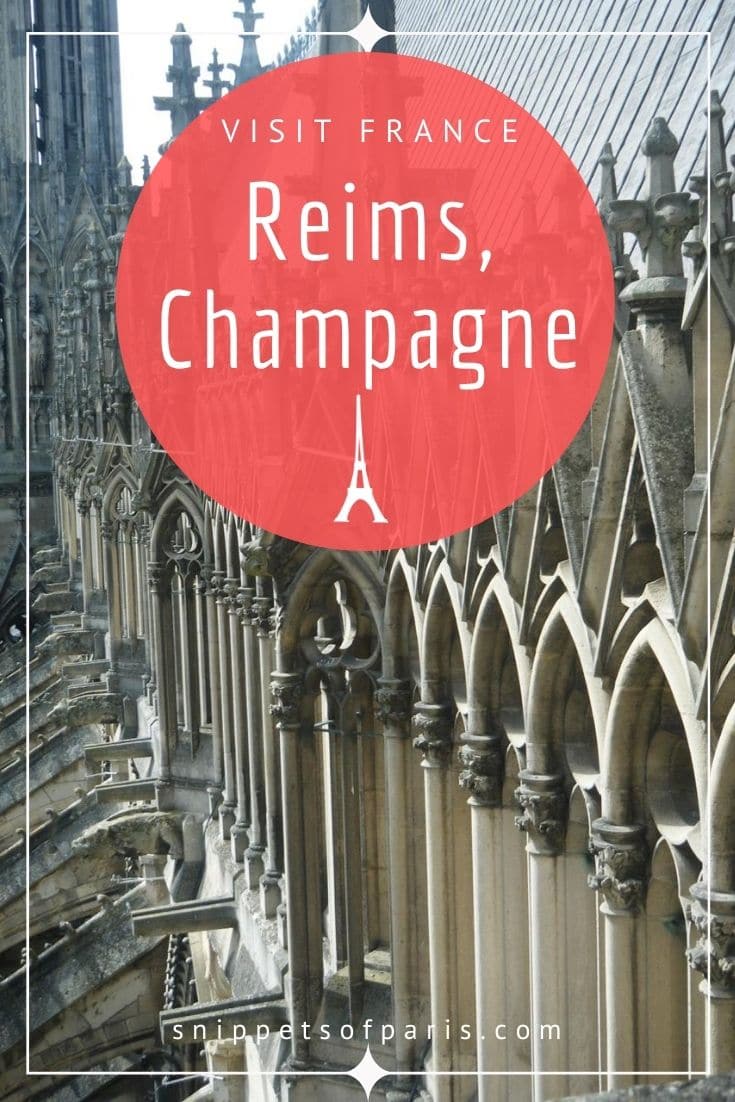 Visiting the seaside town of Boulogne-Sur-Mer in Northern France