Skip to content
With discounts up to 20-40% in shop!
From crêpes to camembert, learn about the traditional foods from Normandy that are much loved by the locals. With starters, mains, desserts, drinks, and more. 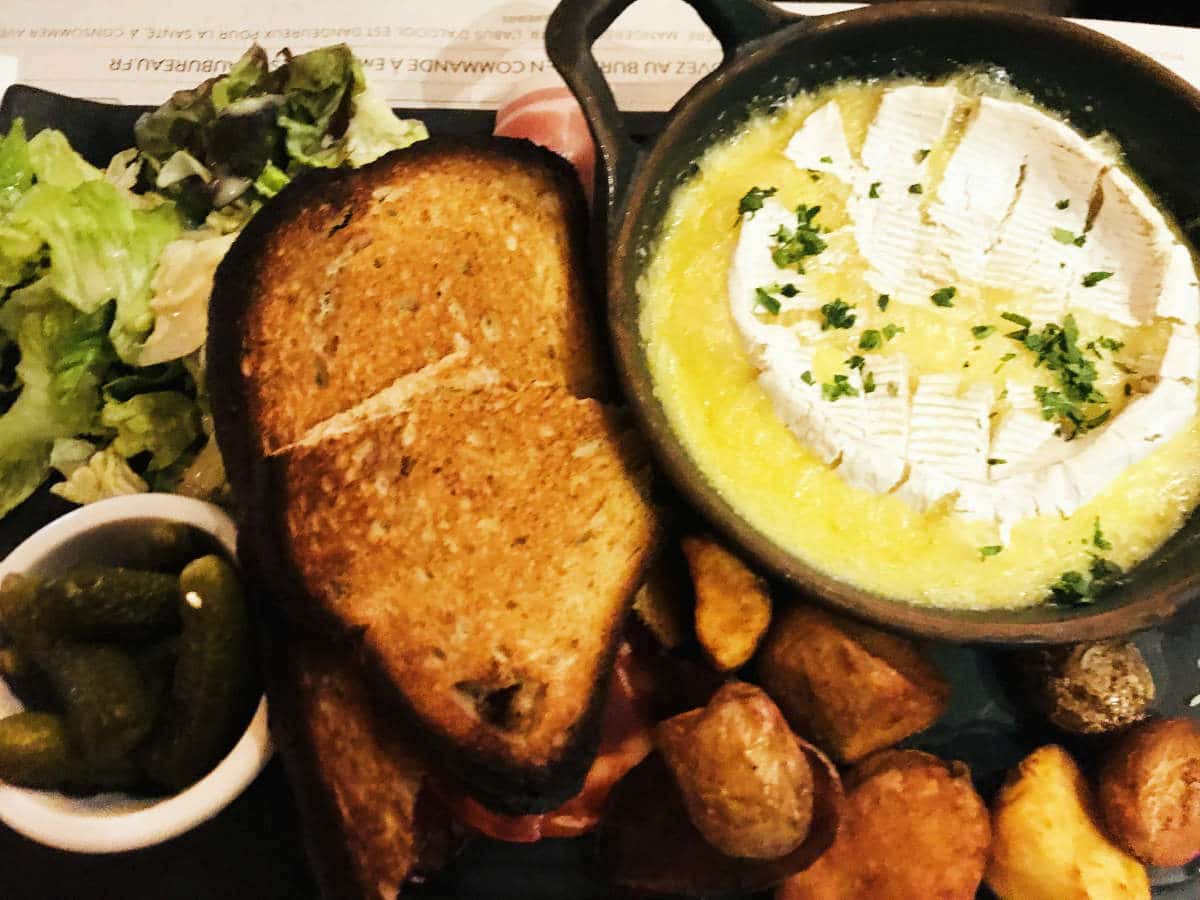 Normandy in the north-west of France is one of the most visited destinations in the country. It is a region that has maintained its own traditions and culture, having been ruled by the Norman dukes for centuries. And a strong part of those traditions include its food.

Gastronomy is an important part of the culture in Normandy and being on the coastline, a lot of the food from Normandy is based around seafood. It is also very famous for the normande breed of cattle which you can spot all over the countryside, providing a cuisine heavy in milks and meats.

If you’re English, you will remember your history with that most famous Norman duke, William the Conqueror, aka Guillaume le Conquérant. The D-Day landings also took place here during World War II. Those centuries of war and strife have also shaped the food culture, when shortages were common and people looked for new and inventive ways to feed themselves.

That cuisine has now become emblematic of Normandy, as well as become popular across the rest of France. So as you travel from Rouen to Bayeux, and Caen to Deauville prepare yourself to eat and drink your way through Normandy. Bon appétit!

1. Camembert and other cheeses

Normandy is known for their dark brown and white cows and their milk. As such, there are several famous cheeses from Normandy, with the most popular being Camembert, Pont L’Eveque, Livarot, and Neufchâtel.

The Camembert de Normandie is from the village of Camembert, around the 18th century. (Nobody said that French cheese-namers were very original.)

One of the most famous French cheeses, Camembert became widely known during World War II, when it was included in the soldier rations.

Camembert is usually sold in a wooden box, and has a whiteish rind, with a light yellow interior. The taste becomes stronger once the package is opened, so be sure to eat it quickly.

These days, the cheese is so popular, recipes like the Baked camembert abound. (Fun fact: In French offices, the pie chart graph is sometimes called “a camembert”.)

Pont-l’Eveque, from the village of Pont L’Eveque, is an uncooked and unpressed cheese, and has a slightly pungent smell. It is the oldest of the Norman cheeses, dating back to the 12th century.

Nêufchatel is a slightly crumbly cheese made in the Neufchâtel-en-Bray, Normandy. It is believed to date back to the 6th century. There is an American Nêufchatel as well, which has cream added to it. You can read more about French cheeses along with some great wine and cheese pairings.

North Americans may have pancakes, but the French have crêpes. And it is from Normandy that those classic crêpes originate. From savory to sweet, they are a blank canvas that can be filled with almost any ingredient you want.

Savory crêpes use buckwheat flour, and can have traditional toppings are ham, eggs and cheese, but you can get other ingredients like spinach, mushrooms, etc.

Sugary crêpes like the crêpe suzette, on the other hand, are usually made from all-purpose flour and are lighter to be served as dessert.

The specifically named Crêpe Normande is filled with tart apples that are browned in butter, sugar, and cinnamon.

There is even a bit of a holiday around the crêpe during Chandeleur (Candlemas). La Chandeleur where French people usually gather around at someone’s house on the nearest Sunday afternoon, and watch the chef serve up copious amounts of crêpes.

Sugary or savory, the crêpes are usually served with large pitchers of cider, another French classic.

The region of Normandy is famous for its cider which is an alcoholic beverage made from the fermented juice of apples.

Cider has been made in Normandy since the 11th century and it is one of the main exports of this area.

Like champagnes and crémants, cider also comes in various levels of sweetness. Sweet cider has around 1.5-3% alcohol and usually goes with desserts. Semi-sec or semi-dry cider is around 3% alcohol, while dry or brut cider is 4% or higher and generally served with a main course.

The region of Normandy on the west coast of France is quite famous for its seafood. One of the delicacies of the area are the moules frites, meaning mussels and fries.

This is one of the classic French foods that you simply have to try if you are in France.

The moules are usually steam cooked and then served mixed with a variety of sauces such as with parsley, or with cream and lardons, and many many more.

Since Normandy is on the coast, seafood is very popular in the region. There are several dishes involving Coquilles St Jacques, meaning “scallops” in English.

In French, they are named after the pilgrims of Saint Jacques de Compostela who crisscrossed France and Spain with the seashells around their neck.

There are many ways to prepare the scallops: raw, marinated, fried or grilled. But one of the most popular in France has to be Coquilles St Jacques with pesto sauce (or pistou), which has a bit of a kick to it. And has the added benefit of being gluten-free, lactose-free and alcohol-free.

Another favorite is Coquilles St Jacques en gratin, where it is cooked with a creamy sauce and breadcrumbs. That one is obviously not gluten-free, since it has breadcrumbs. You can get the recipe for coquilles st. jacques in pesto here.

Each region in France has its favorite fruit tart and pie, and in Normandy, that is the tarte normande. A traditional dessert, it is a shortcrust pastry filled with sliced apples, almonds and sugar. It is usually topped with a creamy egg custard and baked until the topping is caramelised.

You can find tarte normande easily in restaurants all over Normandy, as well as patisseries and boulangeries in the area.

A boudin noir is a blood sausage that is cooked or dried, and then mixed with a filler like cream, apples, or onions. It is then cooked again until it solidifies and served in sausage form.

In Normandy it is usually made from pig, and is considered quite a delicacy. It is often on restaurant menus in Normandy, served with mashed or roasted potatoes and a small salad.

There is even the Confrérie des Chevaliers du Goûte-Boudin (meaning “Brotherhood of the Knights of Blood Sausage Tasting”) in Mortagne-au-Perche in southern Normandy, which holds an annual contest of boudin noir.

One of the delicacies to try in this area in the Pommeau de Normandie. It is a fortified wine and apéritif that is made by blending apple juice and Calvados (apple brandy).

Pommeau has an alcohol content of 16-18% and comes in a range of flavors, with white being drier, and rosé or red being more fruity.

There is also a variation, Pommeau de Bretagne from nearby Brittany, which has a different name since each region in France strenuously protects their appellation of origin.

Pommeau is usually served chilled in a tulip-shaped glass (sherry glass). It is usually imbibed by itself, or as an accompaniment to foie gras, melon, charcuterie or blue cheese appetizers.

The famous Mont Saint Michel also has a claim to one of the most famous dishes in Normandy. This medieval monastery perched on a giant rock, is claimed by both Brittany and Normandy, however it has legally been designated to be part of Normandy.

Inside the tiny village next to the monastery, is the famous Mère Poulard restaurant and gift shop. The restaurant is famous for its Omelette de la Mère Poulard, a giant omelet several inches thick that is cooked over an open fire.

In 1888, the newspaper Le Figaro reported that the original omelette made by Madame Poulard consisted of 30 eggs cooked together in a large pan with butter. Today the restaurant still serves Omelette de la Mère Poulard (however, it is unclear how many eggs are used!)

Another aged-liquor from the French family of brandies is the apple-brandy Calvados from the Basse-Normandie. It can be served as an apéritif or a digestif. It has an alcohol content of around 40% and a smooth and rich taste, with slight apple flavor.

The apples are pressed and fermented into a cider, which is then distilled twice. The remaining eau de vie (meaning “water of life”) must be aged for at least two years in oak casks before it can be called Calvados.

As Calvados ages, it becomes smoother so the price will be a function of the price. Calvados is served either dry or with ice, usually in a balloon or wine glass. In France, it is usually served by itself, or with a cheese plate after the main meal.

Fresh oysters are not usually cooked in France, but served as is, fresh from the ocean. (Fresh oysters are a must-have in France for Christmas.) The hardest part about serving oysters is opening the top shell. But once that is done, just squeeze a bit of lemon on them and serve in a tray.

Be sure to dine at a reputable restaurant, as you do not want to risk food poisoning from bad oysters!

Normandy and Bretagne are famous for their andouille sausages made from pork belly and in some cases chicken. “Andouille” is a protected label in France, and there are strict conditions to be met in order to be awarded that label.

An andouillette is a smaller version, where the whole inside intestine is used. There is sometimes a distinct odor to the sausage.

One particular variety of andouille is the Andouille de vire, which is a smoked sausage from Normandy. It is eaten directly, as a type of charcuterie.

There is also a recipe Andouillette à la normande, where the sausage is cooked with potatoes and served with cider.

Instead of 130 different varieties that the monks initially used, the new Bénédictine is made with twenty-seven flowers, berries, herbs, roots, and spices. It was first marketed by wine merchant Alexandre Le Grand in the 19th century.

Today it has a 40% alcohol content and a sweet honey-like flavor, with a subtle taste of licorice and spices and is imbibed as a digestif. Bénédictine is also used in several cocktails such as the Big Ben and Singapore Sling, and confectionaries and dishes from Normandy.

A brioche is a light sweet bread containing eggs and butter.  It is a cross between a bread and a viennoiserie (pastry) and is believed to originate from Normandy in the 16th century.

The purportedly famous saying by Marie-Antoinette was actually “Qu’ils mangent de la brioche!“, not “cake“, which is gâteau in French.

There are several types of brioches, with each region having its own recipe and speciality:

If you enjoyed that article, you may like to read more about French food facts as well as about other classic dishes throughout France.

7 Foods in Corsica: What to to eat and drink