Skip to content
With discounts up to 20-40% in shop!
Visit Bayeux, a charming medieval town in Normandy on the west coast of France. From William the Conqueror to WWII, we cover top things to see, where to stay, and more. 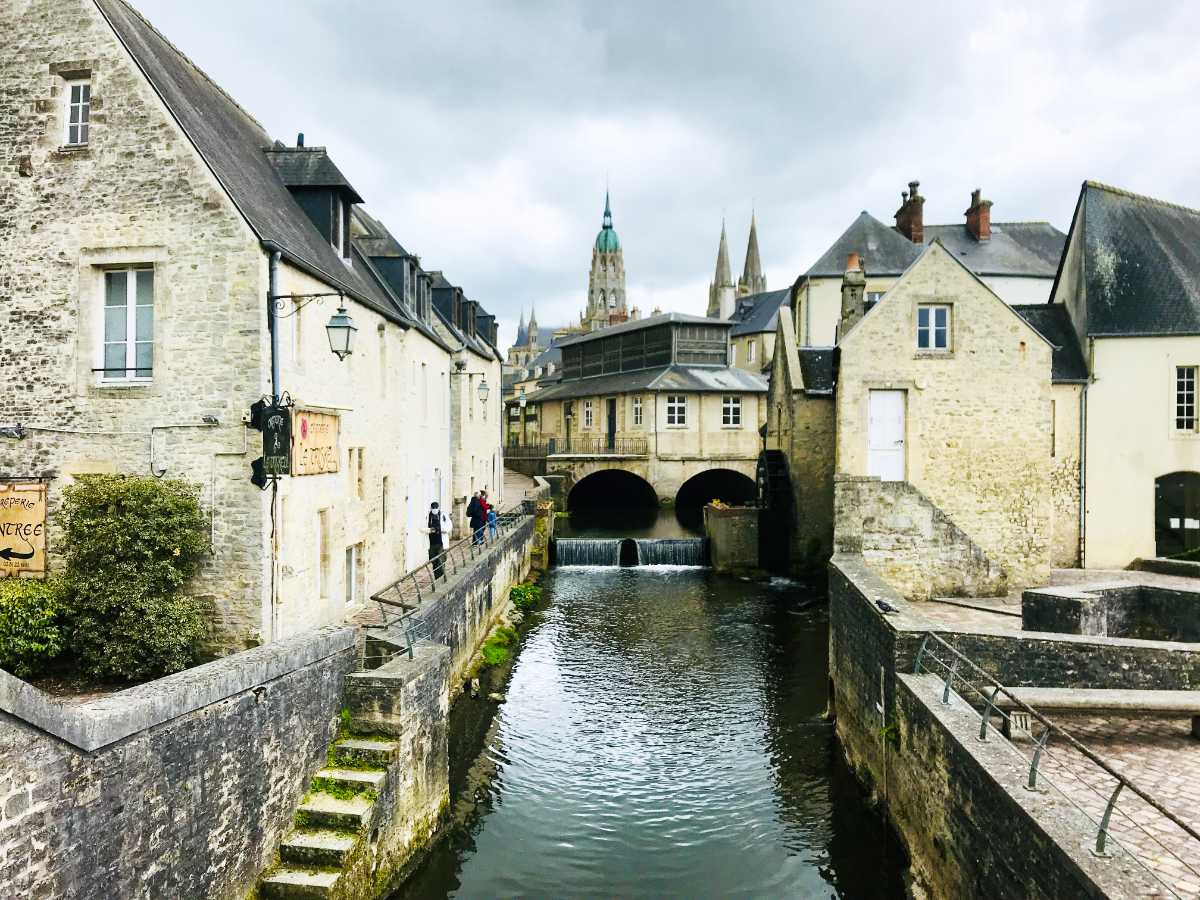 Bayeux on the west coast of France, is certainly a beautiful old town. While many of its neighbors greatly suffered during WWII, Bayeux is a town that managed to avoid the worst of it, and hold on to its medieval roots.

With a charming cobblestone streets, small canals, and an impressive gothic cathedral, it is a town where you get a real sense of history.

Founded as a Gallo-Roman settlement in the 1st century BC under the name Augustodurum. Partially destroyed after the Viking raids, the 11th century saw much stability and growth as part of William the Conqueror‘s dukedom in Normandy.

While nearby Caen was his main base, Bayeux’s close proximity to the English Chanel meant that William and his soldiers were going back and forth all the time.

And indeed it was that proximity to the English channel that put the city under threat during WWII. The D-Day landing beaches are all within less than 20 miles of Bayeux.

Luckily for the town, buildings in Bayeux were virtually untouched during the Battle of Normandy, with the German forces entrenched in Caen, and that city getting the brunt of it.

However, the Bayeux War Cemetery with its memorial includes the largest British cemetery dating from the Second World War in France.

These days, the town is a tranquil place with cozy cafes and shops set in medieval buildings. You can easily walk around it in an afternoon. If you’re a history buff, there is plenty to see and do in Bayeux. So let’s get to it, shall we? Allons-y!

The item that put Bayeux on the map for historians and tourists everywhere is of course the Bayeux Tapestry. It is an exquisitely stitched medieval tapestry that tells the story of William the Conqueror’s invasion of England in 1066.

The tapestry is a large embroidered cloth nearly 70 metres long and 50 centimetres high that depicts the events leading up to the Norman conquest of England, culminating in the Battle of Hastings and the death of King Harold II of England in 1066.

Originally, it was believed to have been stitched under the guidance of Mathilde, William the Conqueror’s beloved wife, but that claim has now been refuted.

Instead, historians believe that it was commissioned by Bishop Odo, William the Conqueror’s half-brother, and is thought to have been made in England at the end of the 11th century, not in Bayeux.

It is unclear how the tapestry ended back in France, and some scholars believe it may have done so during William’s lifetime. It is believed to have been made specifically for the Bayeux Cathedral and was perhaps even there at its consecration in 1077. The earliest record show it was listed in an inventory of the treasures of Bayeux Cathedral in 1476.

Embroidered on linen with coloured woollen yarns, the tapestry is believed to have been worked in England in the 1070s. There are 58 scenes in total, including scene 57 above, which shows the death of King Harold, and Williams victory. The end of the embroidery is missing, the story ends with the Anglo-Saxons fleeing at the end of the Battle of Hastings in October 1066.

The tapestry itself is considered to be one of the foremost accurate accounts of the medieval period in Normandy and England, providing information about civil and military architecture in that era.

Cathédrale Notre-Dame de Bayeux, or Bayeux Cathedral, is a Gothic cathedral in the town that was commissioned by William the Conqueror to celebrate his victory at the Battle of Hastings in 1066.

However, there was already a church on this site, as early as Roman times. Following a fire, the cathedral had already begun reconstruction as early as 1020.

Either way, it is known that William the Conqueror himself, along with his wife and family, was present at its consecration on July 14, 1077.

The building suffered through various bouts of looting during the French Revolution and fell into disrepair, before being restored to its former glory in the 19th century. It escaped significant damage during WWII.

A trip to Normandy on the west cost of France would not be complete without visiting the D-Day beaches and paying your respects to soldiers who fought so bravely and have fallen here.

There are 5 main beaches where the D-Day assault started on June 6th 1944. From east to west, on the coast of France along the English channel, these were:

The closest beach to Bayeux is Omaha Beach which is 13 miles (22km). It is this beach that arguably had the landing that was the most difficult of the 5 Normandy landings on that fateful, with the most loss of life.

You will need a car to get to the beaches from Bayeux, as the public transportation in this area is not very often or convenient. There are many memorials and cemeteries in the area, and it is well worth the visit. You can read more about visiting the D-Day beaches here.

4) Museum of the Battle of Normandy

While Caen has the large memorial to the events of D-Day and its aftermath, Bayeux also has a smaller museum, the Museum of the Battle of Normandy.

Bayeux was the first town in mainland France to be liberated on 7 June 1944. The museum is located close to the memorial garden for war correspondents and the British cemetery.

5) Walk around the Old Town

A great way to make the most of the time you spend in Bayeux is to take a walk through the Old Town. There are lots of little shops and cafes and it’s a great place for people watching, too.

While you’re walking around, you can imagine what it was like to live in the Middle Ages.

At the local tourist office, you can get a walking tour guide of the old town of Bayeux. The old town is pretty easy to navigate, with markers on the ground and knowledge panels along the way. The guide will help you find the key landmarks like the Bayeux Tapestry Museum and the Bayeux Cathedral.

There are a lot of cute little streets and narrow alleys in the Old Town of Bayeux, and you get a real feel for the history of the town.

The region of Normandy is famous for its cider which is an alcoholic beverage made from the fermented juice of apples.

Cider has been made in Normandy since the 11th century and it is one of the main exports of this area. Have a jug of cider with a savory crêpe and follow it with a sweet crêpe for dessert.

Bayeux is famous for its lace-making tradition which dates back over 300 years. The type of lace is a bobbin lace, which is sometimes dyed in black.

These laces can be in the form of ribbons or ruffles stitched onto clothing, but there are also shawls, mantillas, scarves, etc. made entirely of lace.

If you are interested in learning more about lace-making in the area, you can visit the MAHB Museum of Art and History Baron Gérard in Bayeux. There are passes available to combine all three museums, including the Tapestry museum and Battle of Normandy museum.

If you are looking for something a bit different, you can head to Mont Saint Michel which is about 1h35 from Bayeux by car. This religious monastery may be one of the most beautiful heritage sites in France.

In the 10th century, the Benedictine Monks settled here and the site had become a destination for pilgrims from across Europe, which it remains to this day.

You can read more about visiting Mont Saint Michel and get information about taking a tour here.

How to get to Bayeux?

Bayeux is easily accessible by SNCF TER train, taking around 2h30 from Paris, which has the closest international airport. It takes the same amount of time to get to Bayeux from Paris by car.
There are also day-trip tours from Paris that will take you around Bayeux and the D-Day beaches.

The main tourist sights in Bayeux are easily walkable. There is a walking route with markers on the ground and knowledge sign posts that is a little more than 1 mile (1.6km). You can get the map of the walking tour for free at the local tourist office.

One day is enough in Bayeux, however you may wish to stay overnight in the area if you wish to visit the D-Day beaches, Deauville, Saint Malo, Honfleur, and Mont Saint Michel which are all within a 2 hour drive.

The following hotels are within walking distance to all the top sights in Bayeux:
€€€ – Domaine de Bayeux
€€€€ – Grand Hotel du Luxembourg