Skip to content
With discounts up to 20-40% in shop!
Visit Deauville, the luxury seaside town in Normandy on the west coast of France. We cover top things to do in the area, where to stay, what to eat and more. 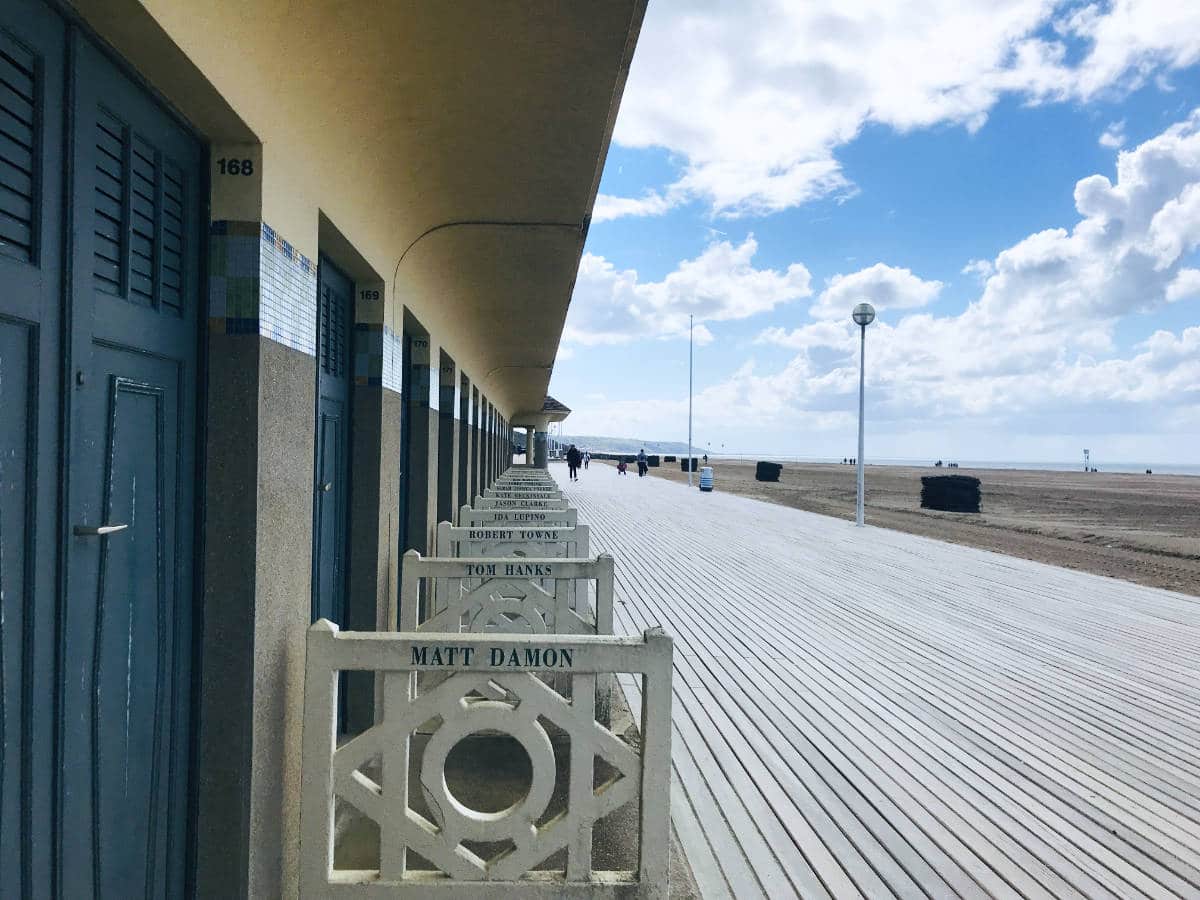 Since the mid 19th century, Deauville has been regarded as one of the most prestigious seaside resorts in all of France. As the closest seaside resort to Paris, the town on the Côte Fleurie has long been home to French high society’s homes by the seaside, often referred to as the “Parisian riviera”.

Once upon a time though, this was all just marshland. It used to be neighboring Trouville-sur-mer that was more famous. When a new railway was built to Trouville on the edge of the town, a clever developer named Duc de Morny had an idea.

In the mid-19th century, he bought up several acres of marshland in Deauville, and convinced his half brother Emperor Napoleon III and the aristocrats around him to purchase homes along the sea as it would be good for their health.

The marshland was turned into constructible land by putting walls alongside the river Touques, and the rich and famous began flocking to Deauville (instead of Trouville) which had kilometer-wide beaches due to all that marshland being filled in.

In the early 20th century, the Barrière Hotel Group built two 5-star hotels along with one of the largest casinos in Europe, putting Deauville firmly on the map with the European jet set. And with all that wealth, of course a horse racecourse was needed.

Deauville became known for horsing as well as luxury hotels. It is home to famous Vente de Yearling where elite horses are bought and sold. In addition, Deauville hosts the Deauville American Film Festival, which is one of the premiere film festivals in Europe.

These days if you are looking for a couple of days to spend by the beach at a world-famous seaside resort, Deauville is the place to be. Being less than two hours away from Paris makes it a popular destination for Parisians and tourists alike.

It is such a popular destination, it has earned the nickname of being the 21st arrondissement of Paris. (Aix-en-Provence in the south has the same nickname, Parisians like their arrondissements!)

With a reputation for beautiful beaches, great food, and gambling, there is plenty to do in Deauville. So let’s check it out, shall we? Allons-y!

Known as one of the best beaches in the world, the beach in Deauville is a sight to behold. It is so wide it is nearly impossible to get a picture of the Deauville boardwalk and the water in the same photo, the beach is so wide.

The reason it is so wide is that this used to be marshland that was gradually filled in. The nobility of yesteryear used to complain how far they would have to walk on the beaches of Deauville in order to put their feet in the water.

In the summer, the beach is packed with happy families, couples and friends soaking up the sun, but throughout the year, it’s a great place to visit.

There are also regularly exhibitions and other events on the beach. There is also a swimming pool and spa facilities in the vicinity, along with plenty of restaurants to make the most of your beach days.

Even if you don’t like to gamble, you have to take a stroll through the Casino Barrière de Deauville. Located just off the beach, it is a gorgeous building with a lot of history.

Founded in 1912, it is part of the luxury Hotel Barrière Group, and is in between the two Hotel Barrières in Deauville. There are a couple of nice restaurants inside, and the casino is one of the largest in Europe, after Monte Carlo in Monaco.

At the casino have a classic French game called Chemin de Fer (pronounced “sheh-meh(n)-de-fer”), which translates to “the path of iron”. It is sometimes called Baccarat, that used to be very popular with the French bourgeoisie in the 19th century.

Named after the Calvados department that it originates from in Normandy, calvados is a popular French digestif that has an alcohol content of around 40%. (It can also be served as an apéritif.)

It is a type of aged liquor from the French family of brandies, except made from apples. The apples are pressed and fermented into a cider, which is then distilled twice. The remaining eau de vie must be aged for at least two years in oak casks before it can be called Calvados. As Calvados ages, it becomes smoother so the price will be a function of the price.

Calvados has a smooth and rich slightly apple flavor and is served either dry or with ice, usually in a balloon or wine glass. In France, it is usually served by itself, or with a cheese plate after the main meal.

You cannot come to Normandy and not have some crêpes. You can get savory versions made of buckwheat flour, with ham, cheese and other toppings.

Try the smoked salmon or the spinach and cheese. There is usually something that is bound to please, whatever your taste.

And for dessert try a sweet crêpe, like caramel and ice cream, or a crêpe suzette. Top it off with a jug of Norman cider, for a perfect meal. You can read more about foods and drinks in Normandy here.

Near the casino and the Hotel Barrière Normandie, is a series of traditional colombage houses that have been repurposed into luxury shops. A bit of Hermes, a bit of Louis Vuitton, whatever your wallet may fancy.

There are also more reasonably priced shops like Printemps, the Kooples, Longchamps and Lacoste. Still on the higher end if you are on a budget, but with plenty of charm and a nice way to spend a few hours.

If you are into horse racing, and even if you have never been to a race track, watching a horse race in Deauville in France is a fun way to spend a day.

Internationally known for its horse culture, Deauville hosts a series of horse races in the summer, although there are a few in the off season as well. There are two famous tracks in Deauville, La Touques and Clairefontaine.

In France, horse racing is called “les courses de chevaux”. The most important races that occur in Deauville are the following, which are all around the month of August:

Several smaller races are also held on weekends during the year. If you’re there during that time, don’t hesitate going to the hippodrome to enjoy the thrill of the race.

If you arrive to the city by train, you will notice that the train station actually serves two cities: Deauville and Trouville-sur-mer.

While the Deauville side has wide expansive boulevards and beaches, the streets in Trouville are narrow and partially perched on a hill.

And the town of Trouville still holds a grudge. “Les meilleurs ennemies” or the best of enemies, as the French would translate. Today, the two cities share that original train station “Trouville-Deauville” and it is telling that the name Trouville is first. The Union Bridge over the Touques was built in 1860 and links the two towns.

Trouville has a more intimate and discreet feel, with its own casino and high-end hotels. Many houses on the Trouville side are directly on the beach, which itself is narrower. If you want a beach house directly on the water, you can read more about visiting Trouville here.

Visiting the D-Day beaches may not have originally on your to-do list if you are planning a seaside holiday in Deauville, but you should know that the town is less than a 2 hour drive away from Omaha beach and some of the other D-day beaches.

If you are American though, you will want to head to Omaha Beach which is 62 miles (100km). It is this beach that arguably had the landing that was the most difficult of the 5 Normandy landings on that fateful, with the most loss of life.

There are many memorials and cemeteries in the area, and it is well worth the visit. You can read more about visiting the D-Day beaches here.

How to get to Deauville?

Deaville is easily accessible by SNCF TER train, taking around 2h15 from Paris, which has the closest international airport.
It takes around 1h45 to get to Deauville from Paris by car.
There are also day-trip tours from Paris that will take you to Deauville and the Côte Fleurie in style.

If you are staying in the city center, Deauville is quite walkable, with shops, restaurants and the beach nearby. However, some of the hotels along the coast are further away, and you may need a car to get around.

I would recommend staying along the beachfront, close to the city center.
Parking is quite expensive in Deauville (between €25-35/day), so if you are counting on staying elsewhere and driving over, you may spend more than you want, than if you just stayed in town.

14 Foods from Normandy (what to eat and drink)

D-Day Beaches and Memorials: 6 Sites to visit in Normandy