Skip to content
With discounts up to 20-40% in shop!
Tags: Recipe
Made with buckwheat flour, the savory crêpe recipe is classic French cuisine. Known as the galette bretonne, this adaptable dish is quick and easy.
(As an Amazon affiliate, we may earn commissions from qualifying purchases. Please see our disclosure policy.)

When you think about crêpes, you don’t usually think about savory crêpes filled with meat and cheese. In France, and specifically the Brittany region, these savory buckwheat crêpes are a tradition.

A lighter meal rather than the typical French dinner, a crêpe-filled dinner will involve a crêpe salée (savory crêpe) as a main, and a crêpe sucrée (sugary crêpe) as dessert. Washed down with a jug of cider, it is the perfect meal at home or in a crêperie restaurant.

While crêpes are not difficult to make, there is an art to making the correct number of crêpes. The Bretons saying:

And equally at the other end:

There is also a tradition of serving crêpes at during the celebration of Chandeleur, although those usually tend to be sweet crêpes, not savory ones (although never say never!)

The beauty of the savory crêpe is that you can put whatever you want in it. If you prefer fish instead of meat, or simply don’t like spinach, you can easily alternate with something else.

The traditional ingredients in a galette bretonne are egg, ham and gruyère, but other possible combinations are:

If you are using ingredients like mushrooms or bacon lardons, make sure to cook them separately first, before adding them on top of the crêpe.

Typically the cheese used is gruyère, but other cheeses such as emmental or cheddar will also do. Basically, you want a hard cheese, that won’t completely overpower the other ingredients.

What to serve with buckwheat crêpes?

Usually, savory crepes are served with a side salad. You can even serve it with a salad niçoise, if you want a hardier meal.

As I mentioned above, usually, most French people will have one savory crepe with salad, and one sweet crêpe (like the crêpe suzette) for dessert for a filling meal.

What drinks to serve?

You could also try a light blanche beer or a sparkling crémant (white wine) from the Loire, but the classic pairing is usually with cider.

This recipe should make around 4-6 crêpes. Please adjust quantities for additional servings.

Note: We are not certified nutritionists and these estimates are approximate. Each individual’s dietary needs and restrictions are unique to the individual. You are ultimately responsible for all decisions pertaining to your health. This website is written and produced for informational purposes only.

Did you try this?

If you enjoyed that, check out our other classic French recipes, and my sweet crêpe suzette recipe that will make an excellent dessert after a savory crêpe. 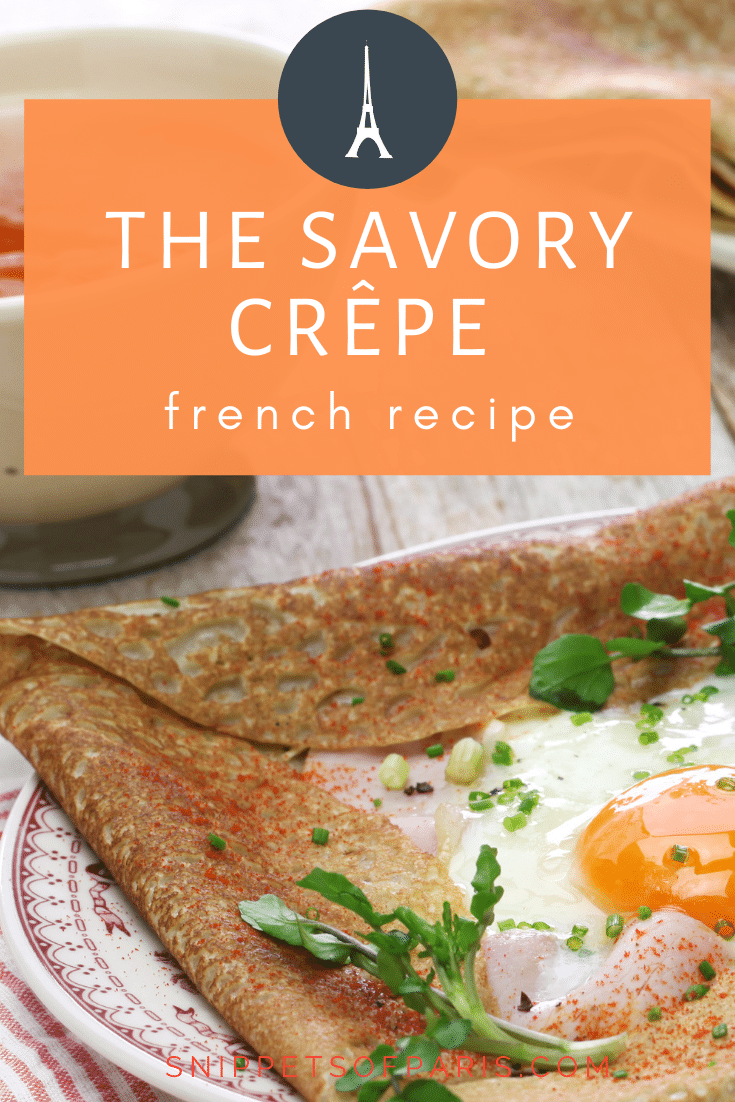 Raclette: The Cheese dish that tastes better at home (Recipe)