Skip to content
With discounts up to 20-40% in shop!
From the Far Breton to Kouign-amann, learn about the traditional foods in Brittany that are much loved by the locals. With cheeses, desserts, drinks, and more. 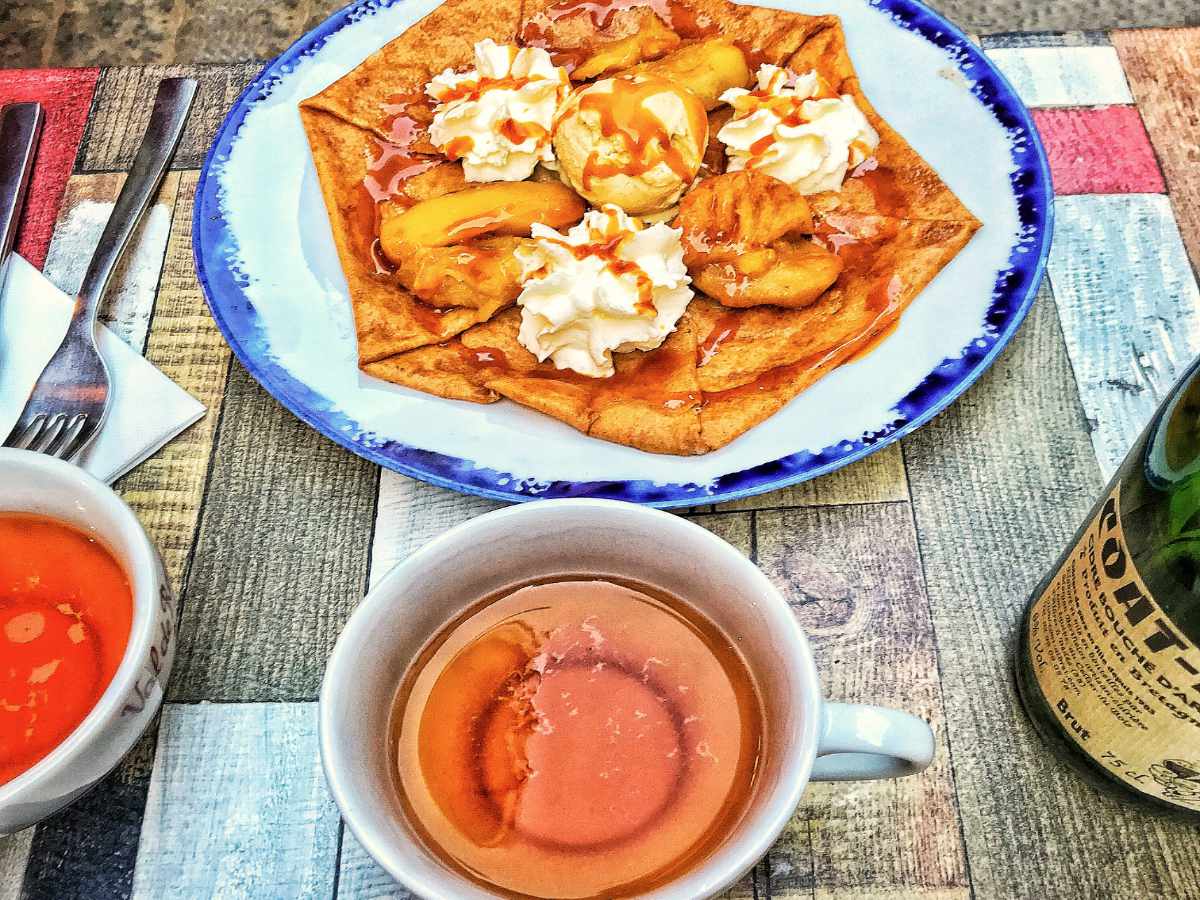 Brittany is one of the most beautiful regions in France, which is no surprise when you see its stunning coastline. The area is also famous for its food and drinks, including its seafood, cheeses, galettes, beer, and of course, cider.

With the region having been forced to join France in the 15th century, the people here have tried to maintain their language and culture for centuries. Food in the Bretagne region is very much influenced by its Celtic origins and the traditions of fishing and farming which are still evident today.

The food in Brittany is said to be simple and hearty, with an emphasis on locally produced ingredients. The Breton language is also apparent in the naming in a lot dishes, proudly proclaiming its origins.

From big cities like Rennes to small towns like Saint-Malo, if you are a foodie on a trip to this part of France, be prepared to eat and drink your way through Brittany. Bon appétit!

A speciality in Brittany, kouign-amann stands for “cake” and “butter” in the local Breton language.

It was believed to have been invented around 1860 at a time when flour was lacking while butter (and milk from cows) was abundant. As such, the proportions are a little unusual, with 400 grams of flour for 300 grams of butter.

A kouignette just is an individual size version of the kouign-amann, which is often eaten as a snack.

Like its neighbour Normandy, the region of Brittany on the west coast of France is quite famous for its seafood. One of the delicacies of the area are the moules frites, meaning mussels and fries.

This is one of the classic French foods that you simply have to try if you are in France.

The moules are usually steam cooked and then served mixed with a variety of sauces such as with parsley, or with cream and lardons, and many many more.

The French flan has many variations. The Basque may have the gâteau basque, but Brittany has its far breton. Originally, it was a wheat porridge that was baked in the oven, with dried fruits such as prunes or grapes added to it.

Today eggs and flour are also added to it, making it slightly less dense than it was previously. Rum is also sometimes added to the recipe. It is considered quite a traditional dish in Brittany, usually served with a local cider.

North Americans may have pancakes, but the French have crêpes. In Bretagne, the crêpes follow a slightly different recipe and hence are called galette bretonne.

The galette bretonne dough consists only of buckwheat flour, water and salt, while a traditional crêpe can contain both flours (65% buckwheat and 35% wheat), water, and sometimes milk and eggs.

Either way, like crêpes, the galette bretonne is a blank canvas that can be filled with almost any ingredient you want. Savory crêpes can have traditional toppings are ham, eggs and cheese, but you can get other ingredients like spinach, mushrooms, etc.

And sweet versions can have anything from fruit, chocolate, compote, honey, and more.

The town of Cancale is known as Brittany’s oyster capital, because there is a particular plankton that grows in the bay, feeding the oysters leading to a high quality of production that has become renowned all over France.

Fresh oysters are not usually cooked in France, but served as is, fresh from the ocean. (Fresh oysters are a must-have in France for Christmas.) The hardest part about serving oysters is opening the top shell.

But once that is done, just squeeze a bit of lemon on them and serve in a tray.

Note, I highly recommend dining at a reputable restaurant, as you do not want to risk food poisoning from bad oysters!

Sugary or savory, the galette bretonne are usually served with large pitchers of cider, another French classic.

The region of Brittany (like Normandy) is famous for its cider which is an alcoholic beverage made from the fermented juice of apples. Cider has been made in the region since the 11th century and it is one of the main exports of this area.

Like champagnes and crémants, cider also comes in various levels of sweetness. Sweet cider has around 1.5-3% alcohol and usually goes with desserts. Semi-sec or semi-dry cider is around 3% alcohol, while dry or brut cider is 4% or higher and generally served with a main course.

Beignet is the French word for “donuts”, although if you looked at them you may not necessarily recognize as a donut.

Dating back to the 13th century in France, these balls of dough sometimes contain a filling like a fruit compote, jam, or chocolate. They are then fried in butter.

Each region in France has their own beignet, with the beignet breton being one of the most popular. It is usually filled with caramelized apple and rhum and is found in boulangeries and patisseries all over Bretagne.

France is the land of 1600 cheeses, so you know that there are going to be a few cheeses coming from Brittany.

A couple of the better known cheeses from the area include Paysan Breton Emmental and Saint-Paulin which is a semi-soft cheese made from cow’s milk. Other interesting cheeses from Brittany include:

Like the Alsace region in the east of France, Brittany is well-known for its beers. Dating back to the 17th century, the region used to be many breweries and microbreweries. However, wars and shortages meant that by the end of WWII, most of the the breweries had shut down.

The last few decades however, have seen a revival of beers “made in breizh” in amber, blonde, russet, and organic beers, and even ones with honey or seaweed!

Some popular local brands include:

This alcoholic aperitif (17% vol.) is Appellation d’Origine Contrôlée, meaning it is specific to this region.

Pommeau de Bretagne is made from two-thirds unfermented apple juice and one-third cider brandy. It is aged in oak casks for at least 14 months and is absolutely delicious.

You may not think of “salt” as being something to rave about, but French chefs place a lot of importance on the quality of this ubiquitous condiment in their dishes.

Since French food usually doesn’t have a lot of heavy spices, and generally relies on fresh ingredients, the quality of the salt plays an outsize role compared to other cuisines.

Brittany on the coast is known for its sea salts that are produced by drawing seawater into marsh basins and allow the water to evaporate, leaving behind the salt. Some salt crystals float on the surface of the water, forming a delicate crust of crystals that is called fleur de sel.

A particular specialty in Bretagne is fleur de sel guerande, which you can purchase here.

A speciality of Brittany, caramel au buerre salé translates to caramel made with salted butter. This French candy dates back to 1946 and became very popular in the town of Morbihan, before taking Paris by storm.

The combination of sweet and salty is very popular in France, with other chocolates like Twix also being sold in France in beurre salé variations. You can buy caramel au beurre salé here.

If you enjoyed that article, you may like to read more about other traditional French foods and drinks.

9 Nouvelle Aquitaine Foods: What to eat and drink