Skip to content
With discounts up to 20-40% in shop!
Get to know these delicious French candies and chocolates so you can pick your favorite. From their flavor, shape, origin, and more. 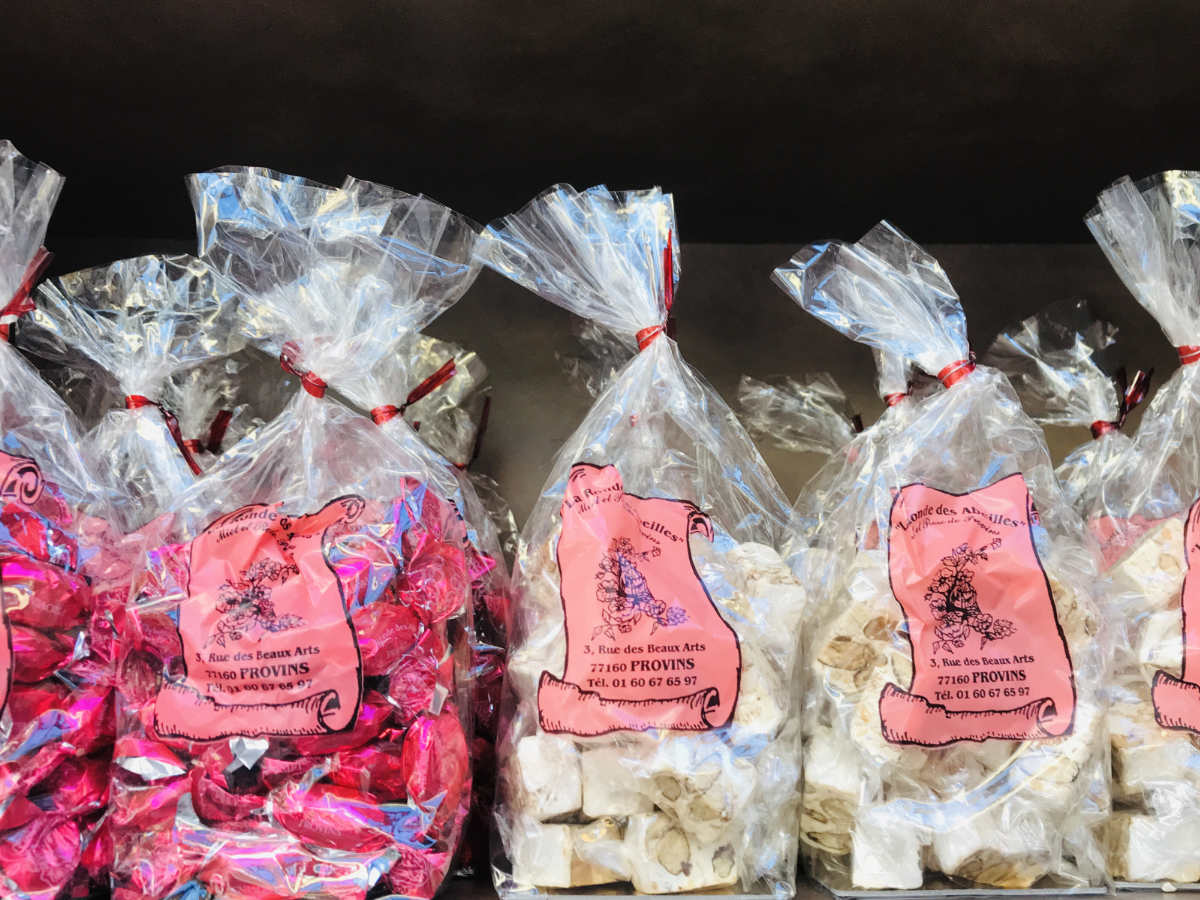 French people love sweets and candies. Along with cakes and pastries, a highly decorated box of candy and chocolates is the perfect gift to give extended family and friends.

From dinner parties to birthdays, weddings, and christenings, there is never a bad time time to give a box of French chocolates.

Known as bonbons or confiseries, French candies are renowned for their artisanal qualities. There are of course the industrial versions, but many candies in France are still made by artisanal candy makers, known as chocolatiers and confiseurs.

With the simple pleasure of enjoying a bonbon, from salted caramels to the delightful delicacy of the French pralines, there is something for everyone. So let’s get to the most delicious candies that France has to offer, shall we? Allons-y!

The traditional sweet from Aix-en-Provence is not a dessert, but more of a confiserie (candy) made from melon and almond paste and is very sweet.

You won’t find it in a supermarket in Paris, but rather in patisseries in Provence and the south of France.

They are catching on in popularity like the macaron however, so perhaps soon to come to a grocery store near you? You can buy and try calissons d’aix here.

Right on the border of the region of Provence, the Montélimar nougat has been the candy of choice for centuries.

The first nougat recipes date back to the Middle East and Mesopotamia (today known as Iraq). With almond trees being grown in the area since at least the 14th century, it is not clear when the Montélimar nougat was first invented and when the first French nougat recipes became popular.

The original formula for Nougat de Montélimar was a confection made from honey, small amounts of sugar, roasted almonds, and whipped egg whites.

These days, there are a wide variety of flavors of nougat, and many different types that you can find across Provence. It is also one of the 13 desserts that are served in Provence during Christmas. You can buy nougat de montelimar here.

Originally from Bordeaux, a canelé is a small French cake flavored with rum and vanilla that is often sold in boxes like candy. It usually has a soft custard center and looks like a smaller bite-sized cupcake.

Sometimes topped with cream, it is now widely available across France, and is often given as a gift. You can buy a canelé cake mold to make your own here.

Dragées are specifically a candy that feature heavily at weddings in France. As part of the dinner table decorations, dragées are small party favors are usually assigned to each seat.

The dragées, which are a type of sugared almonds, are offered in a small packet inscribed with the names of the newlyweds. They are offered in a packet of 5, for the vows of fertility, happiness, prosperity, health and longevity.

Along with the dragées, a small souvenir is also usually offered to the guests such as a bottle of artisanal jam or a sachet of lavender from Provence. You can buy dragées here.

Guimauve is an artisan marshmellow that is made by chocolatiers in France, that is widely popular.

Regular French marshmellows are called chamallows, but a guimauve is more of a higher-end treat. It is made of sugar to egg whites and gelatin.

With a spongy consistency, it is usually shaped in cubes or long, flexible sticks and comes in a variety of flavors like lavender, mint, and more. You can buy guimauves here.

A speciality of Brittany, caramel au buerre salé translates to caramel made with salted butter. It dates back to 1946 and became very popular in the town of Morbihan, before taking Paris by storm.

The combination of sweet and salty is very popular in France, with other chocolates like Twix also being sold in France in beurre salé variations. You can buy caramel au beurre salé here.

A small crumbly biscuit, the biscuit sablé is not a candy exactly, but is sold in boxes by French chocolatiers and confisieurs as such.

It originates from the town of Sablé-sur-Sarthe in the Loire region and is made from flour, butter, sugar and sometimes egg yolks, mixed quickly to obtain a “sandy” consistency. You can buy biscuit sablé here.

From the region of Auvergne and very popular these days in Provence, the pâte de fruits dates back to the 10th century.

It is a candy made from cooked fruit and sugar, which is then placed in a mold. The original recipe was intended to preserve the fruit as long as possible, similar to jam.

There are many types of fruit jellies, the most common being orange, apricot, apple, citrus, plum, etc. You can buy pâte de fruit here.

Another popular candy in the south of France is the orangette. It is a candied orange peel coated with a thin layer of dark chocolate.

The orangette dates back to 1978 in the village of Saint-Marcel-d’Annonay in Ardèche.

This artisanal confectionery is usually handmade by confisieurs and is also one of the 13 desserts that are served in Provence during Christmas. You can buy orangettes here.

There are two very famous types of violettes, from Toulouse in France, and Liège in Belgium.

The Violettes de Toulouse are sweets made from fresh flowers of violets crystallized in sugar, which were created by the confiseur Candiflor in 1818. The process is quite delicate, with fresh flowers being coated with sugar.

The Violettes de Liège, on the other hand, are made from violet flowers that have been cooked into a syrup and then turned into candy in a mold. You can buy violettes here.

Marron glacé translates to “iced chestnuts” and it is a chestnut glazed with sugar that is eaten as a candy.

It is believed to date back to the court of Sun King Louis XIV, while others attribute it to chocolatier in Lyon, and even further afield to Italy.

Nonetheless in France, the first candied chestnut factory was created in Ardèche (near Lyon) in 1882, which produces a lot of chestnuts. The process is quite delicate as the chestnuts must not be broken during the glazing process. You can buy marron glacé here.

As a side product, la crème de marrons meaning “chestnut cream”, is made from broken chestnuts. It is used as a tartine spread on bread (like nutella).

Macarons might be as ubiquitous in North America today as the cookie is in France, but there’s still something to be said to having one freshly prepared at a traditional French patisserie.

If you are in Paris, try the macarons at at Pierre Hermé, Ladurée, or Café Pouchkine near Place de la Madeleine. But if you can’t wait, you can buy French macarons here.

In France, praline is a candy made of an almond or peanut wrapped in chocolate or cooked sugar, which can be flavored and colored in various ways.

There are pralines filled with cream, butter cream, ganache, praline paste, liqueur, coffee, with pieces of fruit or dried fruit, with caramel, and even marzipan.

As the saying goes “life is a box of chocolates, you never know what you might get!” You can buy some French pralines here.

A meringue is a type of dessert or candy made from whipped egg whites and sugar, along with an acidic ingredient such as lemon, vinegar, or cream of tartar.

The traditional meringue from Provence is hardish on the outside, and soft and airy on the inside. They come in many flavors such as lemon or lavender, and are often topped with nuts.

Têtes de chocolat or tête choco as it is called in short, is usually a chocolate candy that is popular in France in Christmas markets.

It is a pastry made of two meringues which are held together with butter cream, and the whole thing is coated with chocolate.

Sucettes and choupettes are basically lollipops, and there are certain kinds in France that are quite acclaimed.

In France , the lollipop was said to have been invented in 1924 by Georges Evrard, owner of the Au Pierrot Gourmand boutique.

His idea was to deposit on a small stick in the melted sugar mold, to create a type of pacifier for small children.  You can buy sucettes here.

One candy that is not meant for children is the papalines from Avignon. And that is because they are filled with liquor.

The candy consists of a couple of layers of choclate, within which is the liquor d’Origan du Comtat. The alcohol is made from the oregano leaves grown near Mont Ventoux that is next to Avignon.

The papaline was named in memory of the popes of Avignon of the 13th century, but its creation actually only dates back to 1960.

A berlingot is a hard candy made from caramel or fruit syrup that is usually in pyramidal form.

There are a couple of famous berlingots in France, the Berlingot de Carpentras (in Provence) and the Berlingot Nantais (from Nantes).

Tradition has it that the making of French berlingot dates back to the pontificate of Clement V, the first of the Roman popes placed in Avignon. You can buy berlingots here.

The bonbon candy “Olives de Provence“, are not chocolate-covered olives. As interesting an idea as it sounds, they are actually almonds that have been covered with chocolate which is then tinted in dark green or black to look like olives.

You will often find them for sale in the south of France (where olive trees are plentiful), with a somewhat helpful picture on the packet to try to explain that they are not olives inside.

If you have a sore throat and even if you don’t, you may enjoy a boule fourrés au miel de lavande.

These sweet candy balls made of sugar, glucose syrup and honey and believed to date back to 1890.

The honey is made from bees who have been feeding on the lavender fields of Provence, giving the honey a light taste of lavender as well. You can buy boules fourrés au miel de lavande here.

Created in 1880 by Léon Lajaunie, pharmacist in Toulouse, the cachou is made with reglisse (licorice), mint, and sugar. It was initially meant for medicinal purposes, as a substitute for chewing tobacco.

These days you will likely find the small tins of the cachou black licorice in the candy aisle at grocery stores around France.

So have you picked your favorite? If you enjoyed that article, you may enjoy reading more about other traditional French foods and drinks.

13 Food in Brittany: What to eat and drink in Bretagne