Skip to content
With discounts up to 20-40% in shop!
From boeuf bourguignon to wine, learn about the traditional foods in Burgundy that are much loved by the locals. With main dishes, wines, cheeses, and more. 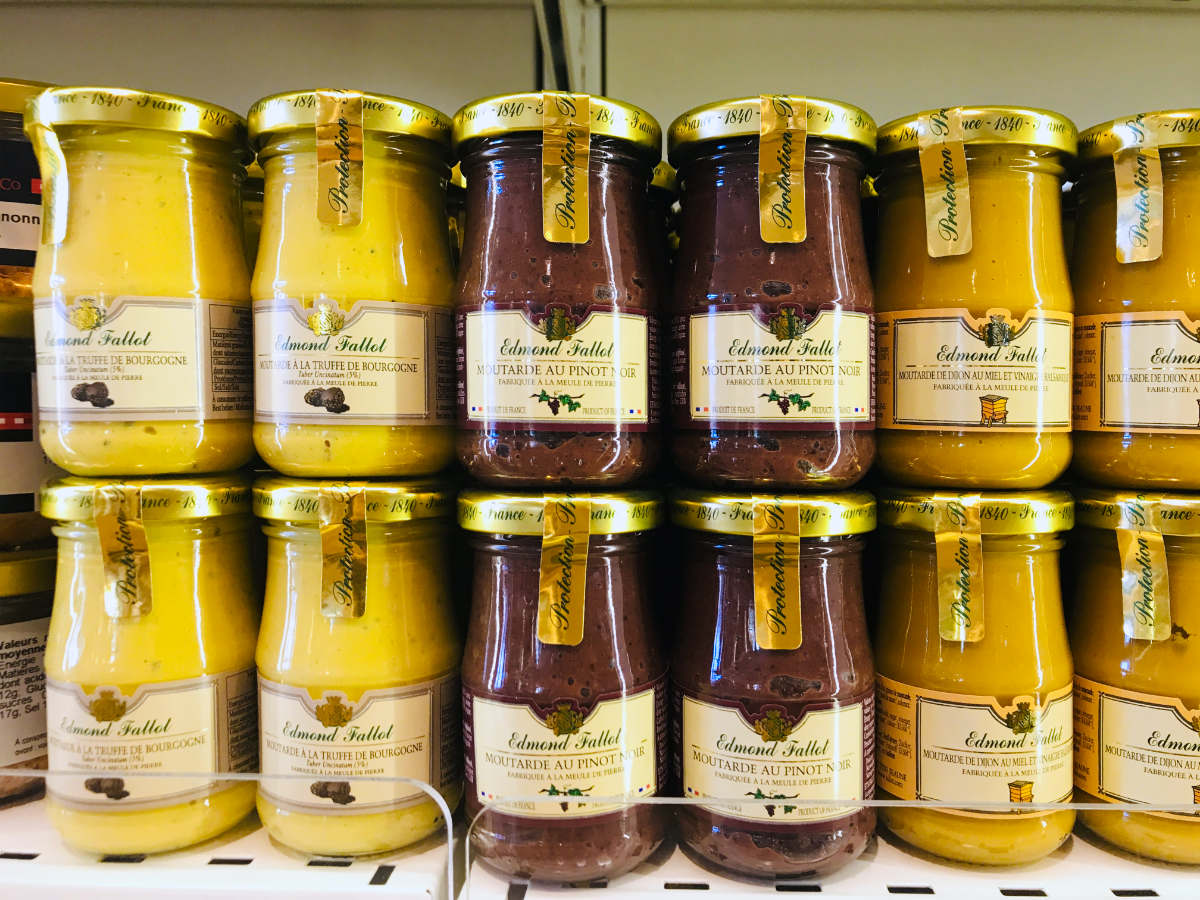 Burgundy is a region in France famous for its diverse and unique cuisine. With its famous wines leading the way, it is one of the most well-known regions for its food and drink and it’s easy to understand why.

Whether you’re visiting Bourgogne from abroad or from other parts of France, you should know that the region is a treasure trove of culture and fine food. From terrines to beef and fish, much of the cuisine revolves around preparing and cooking local products from the terroir (land) in the local wine.

Now while the wines are reputed to be quite expensive, the cuisine is very accessible. With plenty of Michelin-starred restaurants on one end and small brasseries and cafés on the other end, there is something for every price point.

Try the rich flavours of a classic boeuf bourguignon, the mouthwatering tastes of a pôchouse, the creamy cheeses and more, are all paired with some of the most reputed wines in the world.

So from Dijon to Auxerre, and Beaune to Nevers, if you are a foodie on a trip to this part of France, be prepared to eat and drink your way through Burgundy. Bon appétit!

The most popular dish from Bourgogne (Burgundy) has to be its namesake beef bourguignon.

In the Old Country, you perhaps couldn’t afford your ideal cut of beef. The answer was a hearty and rich stew, the traditional slow-cooked boeuf bourguignon.

Being from Burgundy, it stands to reason that they would want to combine the two delicacies that they are most famous for: Burgundy beef and Burgundy wine (more on the wines below).

The typical cut of meat that is used in boeuf bourguignon is not the tenderloin, but the more affordable beef chunk that is large enough to feed the entire family.

With the recipe calling for slow-cooking meat for several hours along with vegetables and wine, this is a French dish that has become a true classic. You can get the recipe for boeuf bourguignon here.

Along with Bordeaux, the other big-name in French wines is the Bourgogne (Burgundy) region. It has the highest number of officially recognized appellations (AOCs) in France, with no less than 37 Grand Crus.

Some of the most famous names in French wines like Chablis Grand Cru, Corton, and Clos de Vougeot come from this region.

Chablis (white wine) is the most famous name we tend to hear from Burgundy, and but Côte de Beaune also has an equivalent 7 white grand crus in the area.

For reds, Côte de Nuits has 24 grand crus, mostly pinot noir reds that are some of the most expensive wines in the world.

Red wines from Burgundy are usually made from pinot noir grapes, while white Burgundy wines made from chardonnay grapes.

Until 2017, all Burgundy wines were AOC/AOP wines, with Vin de Pays being a new appellation for this region. There are 5 main areas in Burgundy including Chablis, Côte de Nuits, Côte de Beaune, Côte Chalonnaise and Mâcon.

Some of the best Burgundy wines in the world are:

The Pouilly Fuissé is a type of wine from Maçon, which often gets mixed up with the Pouilly Fumé from the Loire Valley.

The Pouilly Fuissé is made from the Chardonnay grape (rather than the Fumé’s Sauvignon blanc grape).

In addition, there is also a fortified wine local to the area called the ratafia. Made with fruits from local orchards, Ratafia is a typical Burgundian aperitif. With a delicate taste, quite sweet and slightly acidic, this alcohol is also served as a digestif.

You can read more about Burgundy wines and how to read a French wine label here.

When you have a list of foods from Burgundy, you have to have its native snail on the list. Rather than being squeamish, if you have ever tasted escargots, you know that they are actually a delight.

The particular species from Bourgogne that is used is the helix pomatia snails. But due to overcommercialization, they are protected in France and you cannot wander around the forest looking for them. Instead, the snails eaten are specially farmed for making escargot.

The delicacy is usually cooked in garlic, oil and pesto/pistou sauce, and eaten as an appetizer.

The little balls of meat easily go down with some baguette to soak up the buttery sauce. It is estimated that French people eat 16000 tons of escargot every year. You can read more about eating escargot here.

A terrine is a type of pâté, which is a paste made of ground meats and organ meats, usually containing a portion of chicken, goose, or duck liver, along with herbs, and spices.

However, while the pâté is only lightly cooked, a terrine is has been cooked in an oven, with vegetables, spices, etc. In addition, it is sometimes wrapped in a pastry or preserved in a jar.

Examples of terrine include terrine de campagne (rustic terrine), terrine de canard (duck), terrine de foie gras. A terrine bourguignonne au chablis (the picture above) is terrine made from cow meats that has been immersed in chablis wine.

5. Mont d’Or, Comté, and other cheeses

From the Jura Mountains in Burgundy, Mont d’Or literally means “Mountain of Gold”.

There are two officially recognized cheeses sold under the Mont d’Or (or Vacherin Mont d’Or) AOC label. One from France, and the other from the Swiss Canton of Vaud.

A classic hard cheese, the comté is usually a staple on a French cheese board. From the department Franche-Comté in Burgundy on the border with Switzerland, this AOC-protected cheese is one of the most produced in France.

Hard dry cheeses like the comté date back to Roman times, when it was necessary to have hard flat cheeses that didn’t take up much storage and were easy to transport.

Another cheese from this region is the gruyère. There are 2 types of gruyère, the Swiss one and the French one from Franche-Comté in Bourgogne and Savoie (Alps).

Gruyère is creamy and slightly nutty in taste, and is a very popular cheese that is often used in cooking recipes, such as the French onion soup or cheese fondue. You can read more about French cheeses here.

Pronounced “gou-jaire”, there is no English equivalent. Gougères are delightfully small, hollow pastry puffs made with a doughy mixture of eggs, butter, flour, and cheese.

It’s basically puff pastry baked with cheese inside, and is a speciality in Burgundy where gruyère is used. The French cheese balls, if you will.

They can be served warm or cold, by themselves or with a sauce like tomate provençale or béarnaise. You can get the recipe for gougères here and see more French sauces here.

Every May, the town of Flogny-la-Chapelle in Burgundy celebrates the feast of the gougère with a festival featuring various fêtes, competitions, and exhibitions.

If you don’t eat beef and are looking for an an alternative to the boeuf bourguignon, the classic coq au vin with chicken is everything you can ask for.

A chicken slow-cooked with vegetables in a stew with wine sauce to tenderize it and bring out the flavors. You can get the recipe for coq au vin here.

Frog legs are a delicacy which have been eaten for centuries. Born out of food shortages and necessity, cuisses de grenouilles (meaning “frog thighs”) have been part of French cuisine for over a 1000 years.

There are two main ways that frog legs are cooked, either deep fried or baked with herbs.

There are variations of these types of dish serving cuisses des grenouilles all over France, from Michelin-starred restaurants in Paris to local brasseries in Burgundy. You can read more about eating frog legs in France here.

Another staple of the Burgundian cuisine is pôchouse, which is a fish stew. Using fresh fish caught in the local Saône and the Doubs rivers, the fish is cut into pieces and cooked in a sauce made from white wine.

Similar to bouillabaisse in Provence, the recipe depends on the catch of the day. There are usually at least 2 types of fish used in the dish from pike, eel, carp, perch, trout or even salmon. The sauce used is made from white wine, usually aligoté burgundy.

It used to be considered a “dish for the poor”, with pôchoux meaning “fisherman” in the local patois (slang) in the area. Pôchouse is usually served with potatoes, croutons, and sometimes lardons.

Local specialties in Burgundy, of course, include the Dijon mustard which is a must. There are several flavors of dijon, with everything from honey mustard to a spicy variety that will pique your interest.

Named after the town of Dijon, the traditional recipe uses crushed brown mustard seeds and white wine or a mix of wine vinegar, along with water and salt.

Unfortunately, the appellation “Dijon mustard” is not a legally protected appellation, as around 80% of the mustard seeds are imported from Canada. The term refers to a manufacturing method and a type of mustard, rather than a product linked to the terroir (land).

The Alpine region may have the cheese fondue but in Bourgogne, there is the fondue bouguignonne.

At a gathering with family and friends, raw meat is cooked in a boiling pot of oil, and served with roasted potatoes and vegetables.

The meat is pre-cut into small bite-size pieces and is accompanied by various French sauces like mayonnaise, béarnaise sauce or tartar sauce. The dish gets its name because it also served with liberal amounts of burgundy wine.