Skip to content
With discounts up to 20-40% in shop!
From fondue to génépi, learn about the traditional Alpine foods that are much loved by the locals. With starters, mains, desserts, drinks, and more. 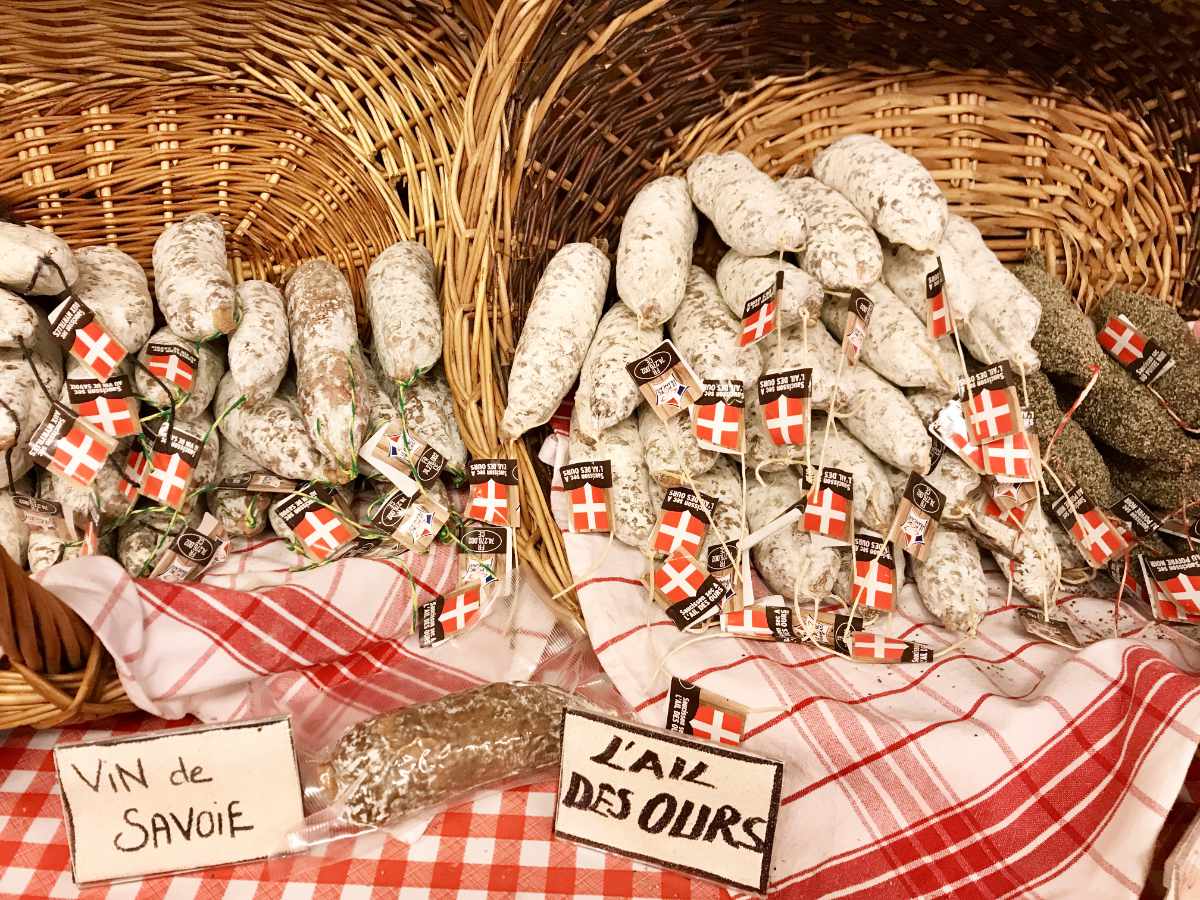 With snow-covered peaks and serene forests, the Alps are home to many small towns and villages that have visitors flocking to the region. And that is because along with the wide open spaces and beautiful scenery, the Alpine region of France is home to some of the best food in the world.

From sausages and cheese fondues, to mouthwatering local wines and desserts, the mountain air seemingly enhances the flavors after a long day of hiking in the summer, skiing in the winter, and other sporty adventures.

This area of France has some of the best mountain resorts in the world, most of whom operate all year round. Because of its status as a popular tourist destination, there are plenty of restaurants and brasseries catering to visitors.

The Savoy region within the Alps also has its own strong culture, given that it only became part of France relatively recently. The House of Savoie was a royal dynasty and independent country dating back to 1003AD. Chambéry became the capital of the Duchy of Savoy in the middle ages, a designation created by the Holy Roman Empire.

The duchy covered much of this area of the Alps until Napoleon Bonaparte decided to annex Savoie in 1792 on his way to conquer Italy. After several wars and back and forth, the Duke of Savoie Victor-Emmanuel II conceded Savoie to the French in 1860 in exchange for another prize: becoming King of Italy.

Even though the Duchy of Savoy has been absorbed in Rhône Alps region of France, the locals still maintain their flag and their traditions. And that includes the food. Fresh local ingredients have been used to make the local savoyarde dishes for centuries, refining techniques and recipes that have stood the test of time.

It is simple food, honest and delicious. So as you travel from Annecy to Briançon, and Aix-les-Bains to Bourg-St-Maurice, prepare yourself to eat and drink your way through the Alps. Bon appétit!

After a long and snowy day, enjoy time with family and friends with this melted cheese dish from the Alps mountains.

Fondue comes from the French word “fondre” which means to melt. There are many combinations of cheeses that to make a cheese fondue, from reblochon to goat cheese.

Different towns in the Alps, and indeed different chefs, will have their own special touch to add to their cheese fondue. There are also different versions including items like mushrooms or tomato sauce for added flavor. You can read more about making a fondue here.

Another cheesy dish that comes from the French and Swiss Alps is the raclette. After a long day of skiing (and even if you haven’t been skiing), sit down and share a raclette with family and friends.

Raclette is a semi-hard type of cheese, traditionally made from non-pasteurized milk.

Friends and family gather together at the end of the day and cook the cheese together, melting it to place on top of potatoes and charcuterie (salt-cured hams). You can read more about eating raclette here.

Génépi is one of those that can be enjoyed as an aperitif or a digestif since it is not very sweet. It has an alcohol content of around 40% and a strong herbal flavor.

It is traditionally from the Rhone-Alps and Savoie region of France (around Lyon) in the center of France. After a long day of skiing in the mountains followed by a large dinner, a génépi is the perfect digestif to finish off the day.

You can even make Génépi at home by steeping the aromatic flowering tops of the herb artemisia in vodka or pure grain alcohol.

Another tradition of savoyarde and alpine cuisine is the Diots de Savoie sausage. The name comes from the savoyard dialect and means “small sausage”.

This pork sausage is usually smoked or cooked with onions and served with roast potatoes or a tartiflette (more on that see below).

Influenced by next door neighbor Switzerland, the rösti is one of those traditional Alpine foods that everyone is bound to love. Originally made from leftover potatoes that are grated and formed into patties, they used to be cooked in lard to soften and add flavor.

These days it is isn’t considered a leftover, and is cooked in butter with other ingredients sometimes added like onions, cheese, or meats.

There are many wine regions in France, and the alpine region of Savoy is no different. The most well-known Vin de Savoie AOC is a white wine that is light and acidic.

Vin de Savoie is a classic in France in the cold weather months and is a much-loved après-ski wine, especially when paired with the traditional winter dishes that are so popular in the region. You can read more about picking a French wine bottle here.

France is famous for its cheeses, and the Alps-Savoy region is no different. Reblochon is a traditional cheese from the alpine region of Savoy, which is said to date back to the 14th century. It was not allowed into the United States until 2004, because it did not pass U.S. pasturization standards.

The reblochon really took off when local chefs decided to take the classic gratin dauphinois recipe and add reblochon to it. This rebranding of the cheese into a new French winter dish called the tartiflette, introduced it to skiers coming into the area every winter and made it popular all across France.

The Tomme de Savoie is another semi-hard cheese from the Alps region, with a lower fat content and milder taste. The cheese is made from skim milk as a leftover, and so started off as a peasant cheese. Today it is popular for its low caloric content and light taste.

Another cheese from this region is the gruyère. There are 2 types of gruyère, the Swiss one and the French one from Franche-Comté and Savoie.

It is creamy and slightly nutty in taste, and is a very popular cheese that is often used in cooking recipes, such as the French onion soup. You can read more about French cheeses here.

If you like cheese and potatoes, there is nothing not to like about a tartiflette. This hearty meal has copious amounts of reblochon cheese and bacon lardons topped onto sliced potato dish, and is delicious as a side dish or a main dish by itself.

It is can be eaten as a main or a side, usually along with a piece of meat or sausage. (Not a lot of vegetarian options in traditional Alpine food, I’m afraid!) You can get the recipe for tartiflette here.

Similar in appearance to the ravioles in nearby Valence, the crozets are small pieces of dough made from sarrasin flour.

These small squares taste like pasta and are just as ubiquitous. They are can be served with meats like the diots sausage, in a gratin, or even in a soup.

Chartreuse is famously made by Carthusian Monks located in the Chartreuse Mountains near Grenoble in France. It is said that only 2 monks know the exact recipe combination of the 130 herbs, plants, and flowers as per the instructions given to them by François Annibal d’Estrées in 1605.

The monks managed to keep the recipe to through themselves through several centuries of religious persecution, wars, and even a mudslide in 1935 that destroyed their distillery.

There are two main types of Chartreuse produced today, yellow which is milder at 40% alcohol content, and a stronger green version at 55%. The coloring of both comes naturally from the herbs and the plants used.

Each region in France has its favorite tart, and in the Savoy, that is the tarte aux myrtilles (meaning “blueberry pie”). A traditional dessert, blueberries grow bountiful in the Alps, making this pastry dish a popular treat after the September harvest.

You can find tarte aux myrtilles easily in restaurants all over the region, as well as patisseries and boulangeries in the area.

Pomme Givrée literally translates to “frozen apple” and is somewhat similar to an ice wine, except not as sweet. It has an alcoholic content of 11.5% and a crisp acidic apple flavor.

As an apéritif, it is popular in the Haute Alps region and is famous for being an elegant drink, regularly served at Palais de l’Elysée which is the home of the French President.

If you enjoyed that article, you may want to read more about French food facts and other classic foods in France.

11 Foods in Toulouse: What to eat and drink

Visit Grenoble: the Capital of the Alps