Skip to content
With discounts up to 20-40% in shop!
Skiing in the French Alpes may be fabulous, but it still requires a bit of research. Get the locals' guide to skiing in France, the best time to go, and the best ski resorts in the French Alps for that perfect winter getaway.
(As an Amazon affiliate, we may earn commissions for certain purchases. Please note, all information is provided for entertainment purposes only. See our disclosure policy for details.)

Most people when they visit Paris don’t think about skiing in France. They think about cheese and baguettes and the Eiffel Tower. But France has way more to offer than that, folks.

For instance, you could be eating that cheese and baguette at some of the best ski resorts in France and the world. This has the added benefit of then letting you burn off some of that cheese with a fun-filled day of ski!

Skiing is a big deal in France, with most Parisians prioritizing it for their winter holiday.  Within four hours of Paris, by high-speed train, you can be in the French Alps.  It is the thing-to-do, for French families during the winter school break, les vacances scolaires d’hiver.

With this massive interest in skiing, there are many resorts, but large and small, who cater to a variety of clientele. So how do you choose? My criteria for narrowing down to the top ski resorts are:

☞ READ MORE: France in Winter: Visiting when it is cold (Brr)

I have narrowed down the ski resorts first, by how easy it is to get there. The two big trains stations, Moûtiers – Salins – Brides-les-Bains (talk about a name that is a mouthful!), and Bourg-Saint-Maurice have direct high-speed trains arriving from Paris, London, Brussels, and Amsterdam.

During winter, additional trains (Eurostar, Thalys, and TGV) arrive nearly every hour, carrying winter sports enthusiasts. These 2 train stations bring skiers to the foot of the Alpes in style and comfort.

The alternative is to fly into Lyon, Grenoble, or Geneva airports and then drive down. There is also the airport at Chambéry, which is smaller.

Along with good transport links, the following resorts all have easy access to ski lessons and equipment are everywhere, as well as plenty of after-ski activities.

The Moûtiers train station brings you to the foot of Les Trois Vallées (the 3 valleys) by high-speed train from Paris, London and other major cities in Western Europe.

The 3 Vallées bills itself as the world’s largest ski area, with over 600 km (370 miles) that are easily skiable from one to the other. This ski domain consists of several ski resorts.

You can buy a ski pass either for your own ski resort or for the full 3 Valleés, the price difference is usually around €50 more for the week. (Note: when I say easily skiable, I mean for a decent skier, not a débutant!)

Within the 3 Vallées is Courchevel, the high-end luxury ski resort that is popular with celebrities and royalty. It has many Michelin starred restaurants, especially at Courchevel 1850. The resort is made up of 6 villages which all have direct access to the ski lifts. The numbers in the name denote their altitude:

These individual villages will be very accessible on skis, but if you are looking for things to do après-ski and nightlife, you will have to choose which ambiance you want.

At night-time, going between the different villages will only be possible by car, not on foot. (You can reserve there by clicking in the links above.)

From Airport to Courchevel – Approximate times with no traffic:

The French ski resort at the highest altitude is Val Thorens in the 3 Vallées, situated above 2000 m. Val Thorens says it guarantees snow, with its artificial machines. It is a very large resort, with just one epicenter village, and has plenty of restaurants, bars, and nightclubs.

It perhaps doesn’t have the small village charm of the Courcheval or Meribel, and is more of a mid-level resort (no Michelin star restaurants here). But the facilities are excellent.

It tends to be our go-to resort as it will likely always have decent snow conditions, and is easy to plan since everything is in one location. You can find accommodation options in Val Thorens here.

From Airport to Val Thorens – Approximate times with no traffic:

Les Menuires is on the way to Val Thorens at 1850m, as they sit on the same mountain, with Val Thorens being higher. It tends to be less busy and less pricy than the other three in the 3 Vallées, while still maintaining excellent connections to the other resorts, since the ski pistes and chairlifts all connect.

A very family-friendly resort for people with small children, since the slopes nearby are good for beginners. (Expert skiers need not worry, they can easily connect to rest of Les 3 Vallées on skis.) You can find accommodation options at Les Menuires here.

From Airport to Les Menuires – Approximate times with no traffic:

A luxury resort right in the middle of Les 3 Vallées. If you are pretty decent on your skis, within 20 minutes you can be in Les Menuires, Val Thorens or Courchevel.

The problem with being so central, of course, is that it is in the middle. This means that there tends to be a traffic jam of skiers at the start and end of the day, as everyone is trying to get to the other parts of the 3 Vallées.

It has many small villages within it (which are skiable but not walkable from one to the other):

Note, the last two, Les Allues and Brides Les Bains, are not ski-in, ski-out. You can book accommodation by clicking on the links above. You will need to take a shuttle or gondola to access the higher slopes of the 3 Vallées.

But they are part of Méribel, so I didn’t want to leave them out, since you would be confused if you saw those names later and accidentally booked there instead. A free shuttle runs in the winter between all the areas.

From Airport to Meribel – Approximate times with no traffic:

There are other ski resorts within the Les 3 Vallées that are accessible from Moûtiers, but these are the largest ones and most popular ones. (And the ones where you are most likely to find people speaking English if that is important to you!)

Competing with the 3 Vallées is the other large ski domaine Paradiski which has Bourg-Saint-Maurice train station nearby for direct high-speed train access from across Paris, London, and Amsterdam. It is slightly smaller, at 425 km (265 miles) of skiable terrain, and also consists of several resorts. The largest ones are:

Usually in everyone’s list of the Top 5 Ski Resorts in France, Les Arcs is made up of 4 smaller sites. Each one is easily accessible one to the other on ski, but not on foot. A free shuttle runs between the sites.

From Airport to Les Arcs – Approximate times with no traffic:

La Plagne is another famous ski resort that belongs to the Paradiski domaine, but it requires changing trains at Moutiers or Bourg-Saint-Maurice train stations, so I am excluding it from our criteria.

It is really not that hard to get to if you have your heart set of La Plagne, but we’ve got to narrow things down somewhere! We suggest you ski over there from Les Arcs, instead of staying there.

In addition, it is made up of 11 villages across a large plain, so you have to consider location before booking. You can find accommodation options for La Plagne here.

From Airport to La Plagne – Approximate times with no traffic:

Similar to Les 3 Vallées you can either get a ski pass just for your resort (eg. Les Arcs), or for the full Paradiski area. The difference is usually around €50 for a week.

Paradiski is not as interconnected as Les 3 Vallées, so if you will likely only go to La Plagne once during your week-long holiday. The Vanoise Express cable car that connects Les Arcs to La Plagne is a bit of a commute, so it gets crowded at the end of the day. There are plenty of slopes in Les Arcs however, so don’t let that put you off!

The 3rd large ski domaine in France is Espace Killy, clocking in at over 300km (186 miles) of ski slopes. It is also near the high-speed train station of Bourg-Saint-Maurice.

A higher-end ski resort that is quite popular with British tourists. It is a large resort and recently got a €200 million upgrade. One of the prettier resorts, with plenty of restaurants, boutiques, vin chaud, and nightlife.

It is home to the original Folie Douce, a bar/nightclub that is on the ski slopes, for partying skiers to stop in the afternoon for a bit of techno and a beer. (The other resorts now have chains of La Folie Douce as well, but the one at Val d’Isère was the first).

Basically, Val d’Isère is big and beautiful, and has excellent skiing. You can find accommodation options for Val d’Isère here.

From Airport to Val d’Isère – Approximate times with no traffic:

Tignes, the cousin of Val d’Isère, connects with it in the Espace Killy, and also offers excellent skiing. Val d’Isère has got the village charm (and the higher prices), while Tignes is more of a mid-level resort.

Tignes is made up of 5 villages which you can ski between, but after hours, it is not walkable from one to the other.

From Airport to Tignes – Approximate times with no traffic:

There is only one ski pass for both Val d’Isère and Tignes so you get access to the full Espace Killy ski domaine for one price.

When is the best time to go?

The ski season in France starts anywhere from the start of December to the end of April, more or less, depending on the snow conditions. Resorts at higher altitudes like Val Thorens will have good ski conditions longer.

French school holidays are generally from the 2nd week of February to the end of the 1st week of March. If you are considering flying in and driving down, you should take into account the travel time in the car. You can read more about picking the best time to go skiing in France here.

So there you have it, have you narrowed down your favorite yet? It’s a tough choice! If it helps, all these resorts have fantastic facilities, and your choice will probably come down to what sort of atmosphere you are looking for aprés-ski and of course, the wallet.

Have fun on the slopes and à bientôt! 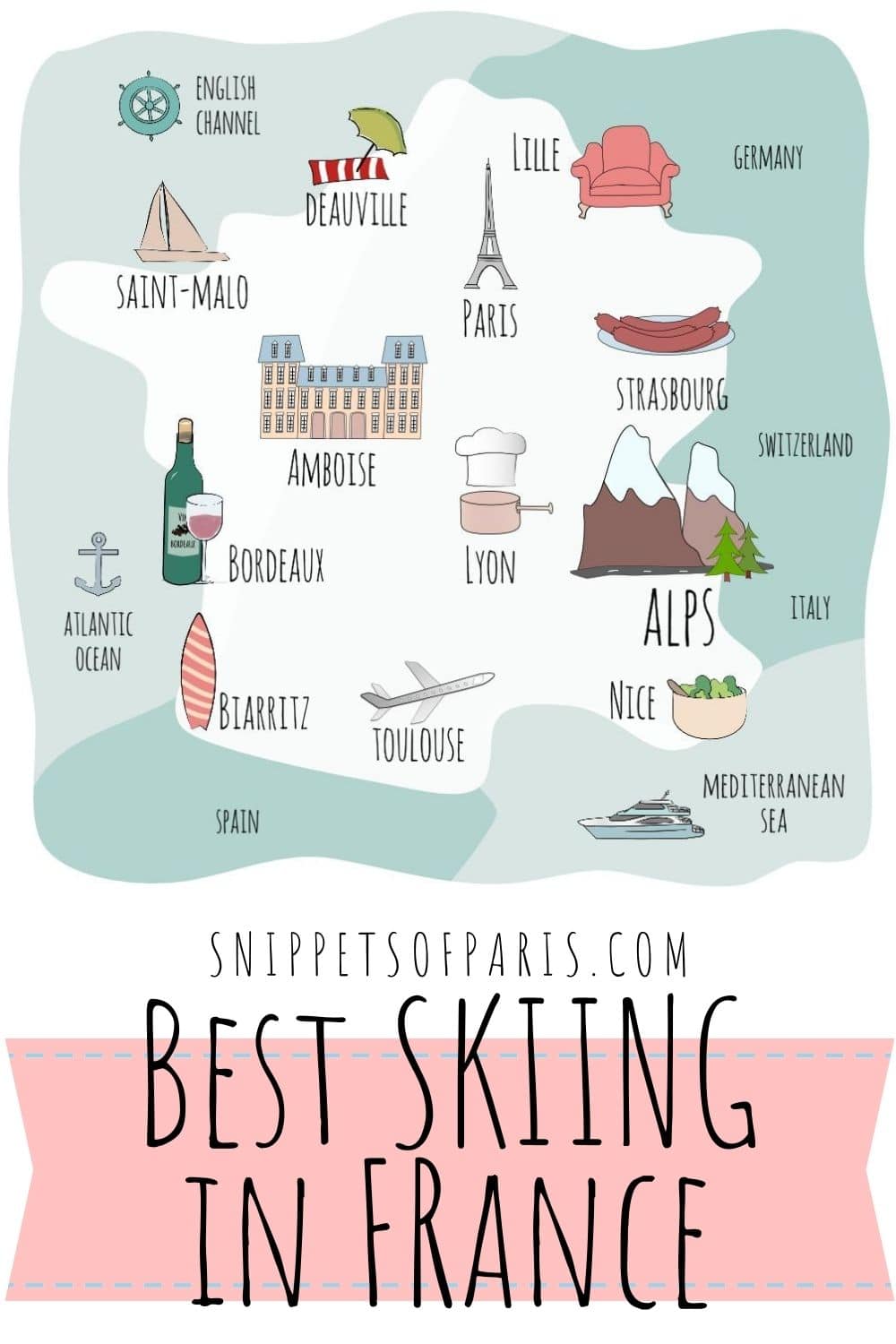 Visiting the other Valence (in Drôme, France)