Skip to content
With discounts up to 20-40% in shop!
Skiing at a UNESCO heritage site? We review Serre Chevalier, the largest ski station in the Southern French Alps and compare it to other ski stations.
(As an Amazon affiliate, we may earn commissions for certain purchases. Please note, all information is provided for entertainment purposes only. See our disclosure policy for details.)

While the large ski stations in Alpes du Nord (Northern Alps) concentrate on visitors from Paris, London, and Northern Europe, one ski station attracts a large number of skiers from the South of France: Serre Chevalier.

And compared to the newer ski stations that were built in the 1950s-60s, the villages of Serre Chevalier were around as early as the 9th century before skiing was even invented. In French we call it the charme de l’ancien (charm of the old).

☞ READ MORE: France in Winter: Visiting when it is cold (Brr)

Serre Chevalier is spread out over 1200-2800 m in altitude. You have a good chance of having snow even at the start of the winter season. I should note though, that the ski slopes are north-facing and so tend to turn into ice in the afternoons, especially early in the season.

The resort is also labeled “familie-plus” meaning that is is very family-friendly. With that thought, you will have to watch out for the “vacances scolaires”. During school holidays when the resort will be quite packed. French school holidays are generally from the 2nd week of February to the end of the 1st week of March. You can read more about the best time to go skiing in France here.

How to get to there

The largest ski station in Alpes du Sud (Southern Alps), Serre Chevalier has 3 trains a day coming from Marseille. It’s close location to the Italian border means that there are also direct trains from Milan and Turin.

By contrast, to come from Paris and the North, you will have plenty to time to twiddle your fingers. The only direct train is an overnight train that brings you directly to the closest train station in Briançon. So if you are coming from Paris, London, or Amsterdam, I suggest checking out the Northern Alps ski stations that are easier to get to:

The Resort in 4 Parts

As I mentioned, unlike newer resorts like Val Thorens and Les Arcs, large portions of Serre Chevalier are actually UNESCO world heritage sites. Les Arcs, in particular, was built with modern skiers in mind, with many hotels having Ski-In Ski-Out access directly from the residence. Serre Chevalier, however, was built in a different era.

L’Église Notre-Dame-de-l’Assomption, the oldest church in Serre Chevalier in the town of Monetiers-les-Bains was founded in the 9th century. If you are looking for an authentic French ski village, with charming little streets and 16th century stone buildings, Serre Chevalier has it in spades.

The town itself is made up of 4 towns, and each town has several neighborhoods. This does get confusing when you are trying to book on a website such as Booking.com because it is the town or the neighborhood is important for access to the slopes.

The largest of the 4 towns where the train station is located. The older part of the town is on a hill and is a UNESCO world heritage site, but there is a large valley between the town and the ski slopes. A cable car is available to carry you and your ski equipment to the top, which will get annoying if you are planning on staying for a few days.

The hilltop town is gorgeous and worth a visit even in summer. But for skiers and winter sports enthusiasts, I would recommend that you stay in one of the other 3 villages. You can read more about Briançon here.

Slightly higher up the mountain, Monêtier-les-Bains is famous for its natural thermal baths, which you can indulge in at Les Grands Bains. (Note: Men are required to wear a speed. There are no swim trunks allowed, as is the case with most public pools in France.)

The central town where the 16th century l’église Saint-Marcellin is located on one side of the town. Newer ski lodgings and the ski schools are on the other side.

Not to be left out Saint-Chaffrey also has a UNESCO listed church, l’église Catholique Saint-Chaffrey which is relatively new, having been constructed in the 1700s.

The ski-lifts are all slightly on the older side, but are in the process of being changed. The towns are accessible from one another by car and on skis, but not walking. Each town has its own little personality and charm, and all of them tend to cater to a more familial crowd.

There are several lovely restaurants in each town, serving French and European cuisines. Raclette, fondues, tartiflettes, and vin chaud are very popular menu items, so make restaurant reservations early as seating is limited.

There are a couple of bars in each town, but don’t expect any nightclubs or extensive partying. Most people here do their entertaining in restaurants in the evenings with friends and family.

A bientôt and happy skiing! 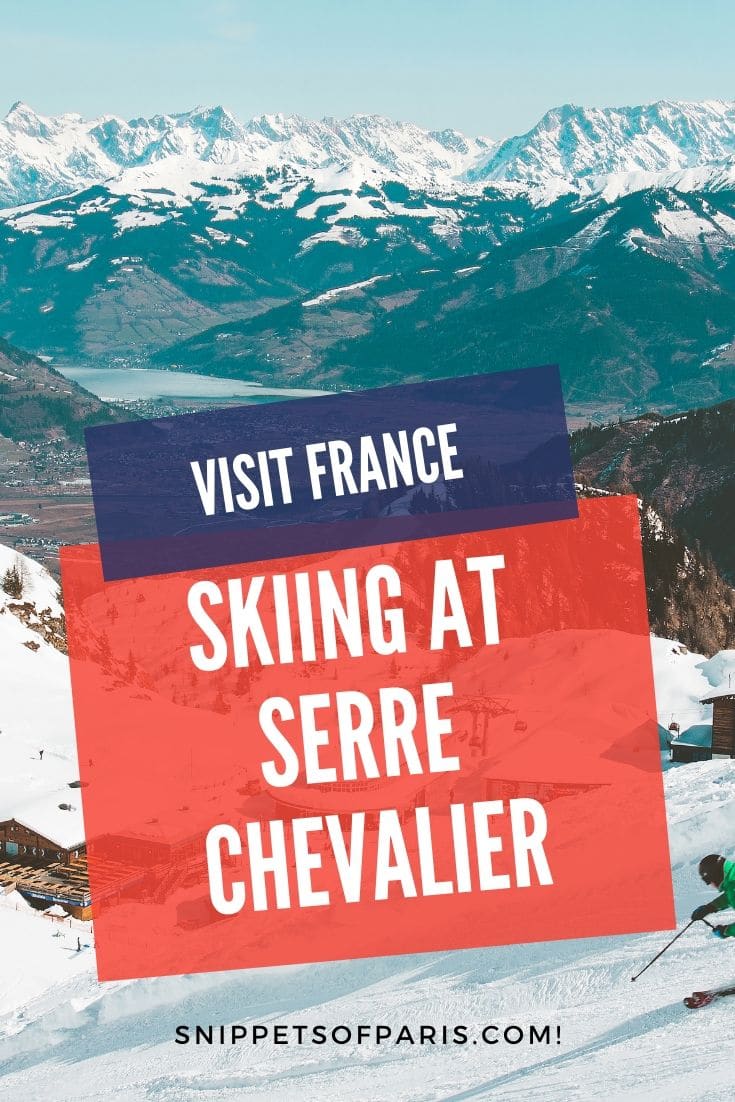