Skip to content
With discounts up to 20-40% in shop!
From quenelles to lyonnaise potatoes, learn about the traditional foods in Lyon that are much loved by the locals. With wines, main dishes, desserts, and more. 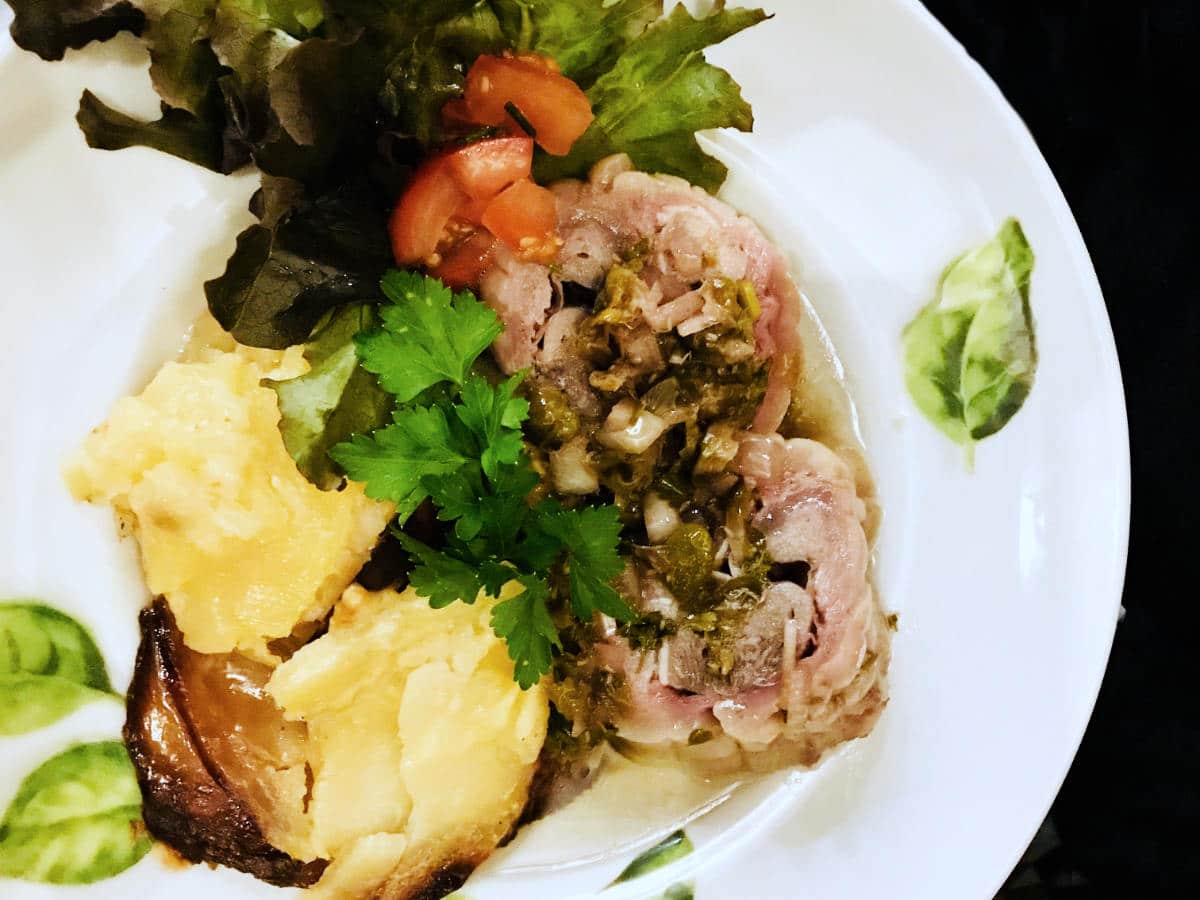 Lyon is a city that’s famous for its food. In fact, Lyonnaise cuisine is so famous, it is considered the gastronomical capital of France.

And it is not hard to see why. The city has a huge range of restaurants and cafes serving a wide variety of delicious dishes, from small traditional family-run restaurants to Michelin-starred haute cuisine.

The city of Lyon dates back to the Roman era, when it was an important capital in the Roman empire.

However, the city’s gastronomical reputation really sprung in the 18th and 19th centuries with the Mères lyonnaises. Meaning “Mothers of Lyon” in English, it refers to the female cooks who decided to start their own businesses, serving dishes that mixed homemade and traditional cuisine.

Many times they would open a bouchon which was a small family-owned restaurants that are local to Lyon. In the 17th century, these were tiny taverns or inns where silk merchants stopped during their trade route to have a meal, rest their horses, and, maybe stay overnight.

Bouchon in French translates to “cork” and the name comes from a 16th-century french expression for a bunch of twisted straw used to clean the horses. These days, the bouchons are famous for their hearty meals and traditional dishes. You can find a list of official Lyonnaise Bouchons here.

More recently, Lyon has gained a reputation because of famed French chef Paul Bocuse. Known for his innovative approach to French cuisine, the chef (who died in 2018) made the city his home base. His school, the Paul Bocuse Institute still has inspiring chefs from all over the world to travelling to Lyon to learn his techniques, many of whom eventually opened restaurants in the area.

Whether you’re looking for a classic lyonnaise bouchon or a full-fledged Michelin star experience, if you are a foodie on a trip to this part of France, be prepared to eat and drink your way through Lyon. Bon appétit!

The city of Lyon considers itself to be the gastronomical capital of France. And one of dishes it is famous for is the quenelles.

Quenelles are a traditional mixture of dough, cream, egg yolk, and and sometimes pike fish.

After the quenelle is formed in a sausage-shaped pastry, it is cooked in a creamy sauce. It can be served as an appetizer or as a main. You can find the recipe to make quenelles here.

Marron glacé translates to “iced chestnuts” and it is a chestnut glazed with sugar that is eaten as a candy.

It is believed to date back to the court of Sun King Louis XIV, while others attribute it to chocolatier in Lyon, and even further afield to Italy.

Nonetheless in France, the first candied chestnut factory was created in Ardèche (near Lyon) in 1882, which produces a lot of chestnuts. The process is quite delicate as the chestnuts must not be broken during the glazing process. You can buy marron glacé here.

As a side product, la crème de marrons meaning “chestnut cream”, is made from broken chestnuts. It is used as a tartine spread on bread (like nutella).

The historical province of Beaujolais is situated less than 1 hour away from Lyon. Today it is part of Bourgogne (Burgundy) which produces some of the most exported wines in the world, however the Beaujolais wine has its own appellation and state.

The Beaujolais is usually a light red wine made principally from Gamay grapes, compared to the Burgundy red wines which use the Pinot Noir and Chardonnay grapes.

There are also 10 types of Beaujolais Cru, with Brouilly and Côte de Brouilly being the most well known. The wines have an aroma of plums, strawberries, and red currents. The wine is meant to be imbibed when it is young. It is also a wine that does well in a vin chaud recipe.

There are many local delicacies in Lyon, but my favorite is the Tarte Lyonnais. It is a pink praline tart that is served as dessert. It is generally available everywhere, especially if you dine at a Lyonnaise Bouchon.

From the region of Auvergne in the center of France around Lyon, comes the bleu d’Auvergne.

It is made from cow’s milk and is a bit less salty in taste than the roquefort, and as well as more creamy. It is often used in salad dressings like blue cheese dressings. You can buy Bleu d’Auvergne here.

Other popular cheeses in the area are Saint-Marcellin and Saint-Felicien which are both soft French cheeses made from cow’s milk named after their respective villages. You can read more about French cheeses here.

If you don’t eat beef and are looking for an an alternative to the boeuf bourguignon, the classic coq au vin with chicken is everything you can ask for.

A chicken slow-cooked with vegetables in a stew with wine sauce to tenderize it and bring out the flavors. You can get the recipe for coq au vin here.

If you like organ meats (known as les abats or la triperie) there is a lot of variety in Lyon. Everything from beef and chicken guts, to livers to cheek jowels, is served as a French delicacy.

For adventurous eaters (and those with a bigger budget) head over to Paul Bocuse’s Michelin star restaurant and try his famous stuffed chicken bladder dish. (His family today still runs a series of restaurants and brasseries in Lyon.)

You can also find tripes at the Halles de Lyon, which is a large indoor food market opened by Paul Bocuse that first opened in 1971. More than a farmers’ market, it is an epicerie fine, with artisan meats, seafood, cheeses, wines and more.

(If you are a food gourmand, you cannot miss visiting the Halles on your trip to Lyon), and trying a few of their delicacies. If you are not sure what local specialties to taste, I recommend booking a tour.

An andouillette is a coarse sausage made from pork or veal, where the whole inside intestine is used. There is sometimes a distinct odor to the sausage, which is rather smelly

Tripes are sometimes also included as ingredients in an andouillette. Lyon is famous for its veal andouillettes, a dish that can be served warm or cold.

Normandy and Bretagne are famous for their andouille sausages made from pork belly and in some cases chicken. “Andouille” is a protected label in France, and there are strict conditions to be met in order to be awarded that label.

Lyonnaise potatoes involves of sliced potatoes that are pan fried and sautéed in butter with parsley. Bacon lardons and thinly sliced onions are also sometimes added to the recipe.

Lyonnaise potatoes are usually served as an accompaniment to a meat dish, like roti de boeuf.

Rosette de Lyon is a cured saucisson that is served in slices along with other French charcuterie.

It is made from pork and sometimes has bits of pepper in it. The light sausage casing around the rosette is edible.

Tablier de sapeur is a Lyonnais dish make from beef tripe, specifically the gras-double. The tripe is quickly boiled, marinated in white wine, then covered in breadcrumbs and fried.

It is then served with a sauce with chives added and steamed potatoes. You can find Tablier de sapeur in the restaurants of the Lyonnais bouchons.

Pronounced “gou-jaire”, there is no English equivalent. Gougères are delightfully small, hollow pastry puffs made with a doughy mixture of eggs, butter, flour, and cheese.

It’s basically puff pastry baked with cheese inside and is a speciality in Lyon. The French cheese balls, if you will.

They can be served warm or cold, by themselves or with a sauce like tomate provençale or béarnaise. You can get the recipe for gougères here and see more French sauces here.

Eau de Vie literally translates to “water of life” and is not just one, but a class of digestifs. It has an alcohol content of 40-45%% and the taste of a light fruit flavor.

It is a clear and colorless fruit brandy that can be produced from all types of fruits such as pears, raspberries, apples, plums, etc.

It is a candy made from cooked fruit and sugar, which is then placed in a mold. The original recipe was intended to preserve the fruit as long as possible, similar to jam.

There are many types of fruit jellies, the most common being orange, apricot, apple, citrus, plum, etc. You can buy pâte de fruit here.

The salad has a base of any green salad leaves which is topped with fried smoked bacon, croutons cooked in butter, a poached egg, and bits of parslet. A vinaigrette sauce made of walnut oil and wine vinegar is then added and mixed in.

Pogne or Pogne Romans is a type of brioche or sweetbread, that is shaped like a crown. A local speciality in Romans-sur-Isère (about 1h15 south of Lyon), it is made from flour, eggs and butter and flavored with orange blossom.

Dating back to the 14th century, it was also traditionally only made for Easter, like the Suisse biscuit from Valence.

You can eat it by itself, or slathered with a fruity jam or nutella. There is even a small museum in Romans-sur-Isère dedicated to all things pogne.

Suze originates from the Jura region of France, which is just south of Lyon. It has an alcohol content of 15-20% and has a taste of citric and herbal flavor. It is an apéritif that can be bitter depending on how it is mixed.

You can serve Suze directly with a couple of ice cubes, but this might be a bit bitter. It also goes well with sparkling water, tonic water, sparkling wine, or lemon juice.

The original has a strong taste of gentian, the herb that is used to make it, but you can also get flavored Suze:

You can buy a bottle of Suze here.

12 Alpine foods to love (what to eat and drink)

12 Fabulous French Digestifs that you need after dinner

11 Foods in Bordeaux : What to eat and drink