Skip to content
With discounts up to 20-40% in shop!
There is more to Beaujolais wines than just the Beaujolais Nouveau. We explore the various types of Beaujolais coming from this wine region in the center of France. 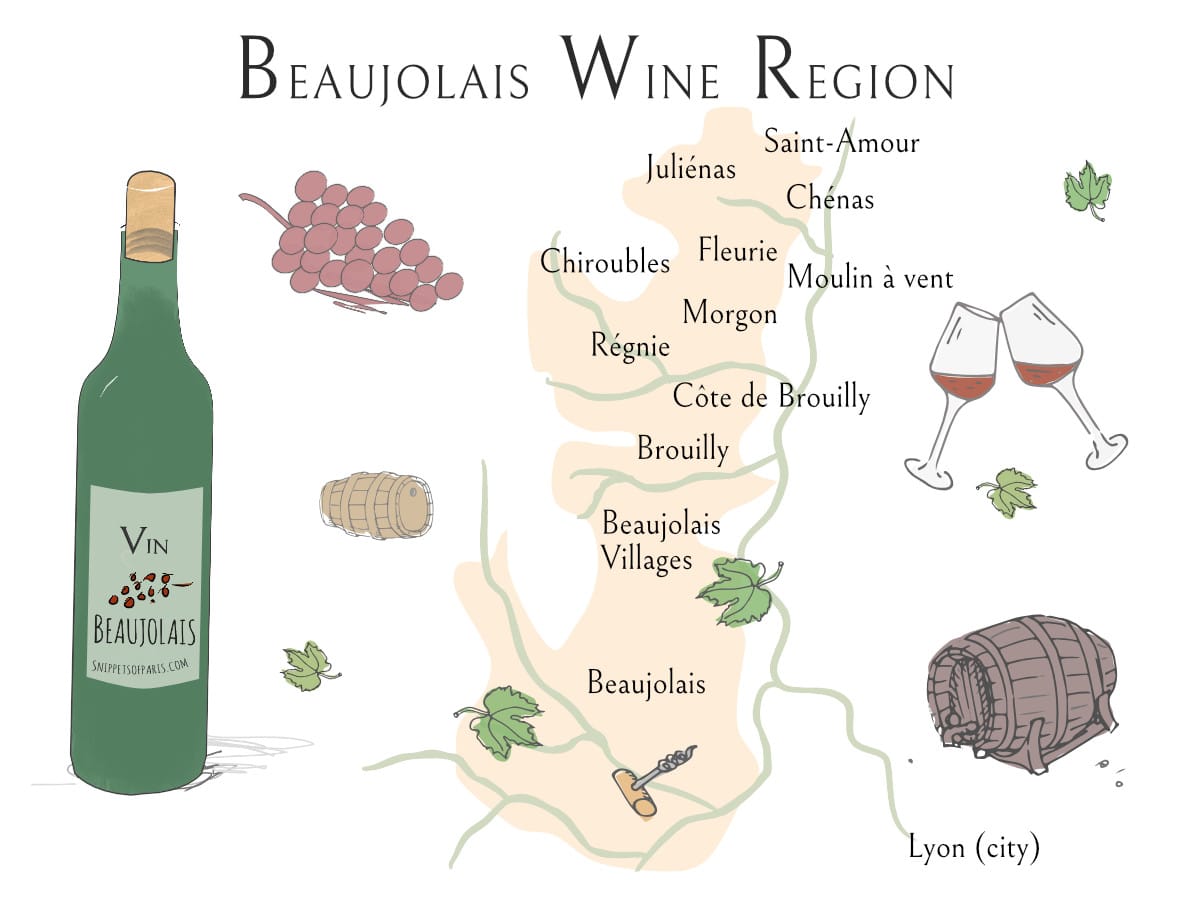 The historical province of Beaujolais doesn’t officially exist anymore. It has long been absorbed into the neighboring region of the Bourgogne-Franche-Comté (Burgundy) region in the central-east side of France. Officially, Beaujolais is part of the Saône-et-Loire département of Burgundy, with a portion of it in the Rhône département of the Rhône-Alpes region.

However, while neighboring Burgundy wines are known for their reputation and prestige, which is not quite the case for the Beaujolais.

Even within France the Beaujolais is sometimes quite scoffed at. And it has a reputation for sometimes producing vintages that are, frankly, not fabulous. (It does make an excellent wine for vin chaud, however.)

Classifications: How to pick a bottle

First up, is the initials that are listed on a Beaujolais bottle of wine:

If the wine is an AOC or an AOP, it can then be further identified with its prestige status, as follows:

You can find out more about reading French wine labels here.

What grapes are used?

Beaujolais wines are very different from their full-bodied Bourguignon neighbors, and we should not confuse the two. The Beaujolais is usually a light red wine made principally from Gamay grapes, compared to the Burgundy which uses the Pinot Noir and Chardonnay grapes.

What wine is the Beaujolais known for?

The vignobles in the area dates back to the 10th century and the Dukes of Beaujeu. It became part of the royal realm of France, when King François I (of Château de Fontainebleau fame) inherited it from his mother, Louise of Savoie. At the time Savoie was an independent duchy, with Annecy as its capital.

Being part of the royal lands belonging to the Kings of France gave Beaujolais wines easy access and a cachet to the large consumer markets of Lyon and eventually Paris.

The gamay grapes that are the main grape in Beaujolais wines are popular because they have low levels of tannins.

The lower level of tannins (which are a naturally-occurring compound called polyphenols) means that Beaujolais wines don’t leave a dry grainy after-taste.

The red wines are relatively fresh with light fruity notes and a soft earthy undertone. Compared to a full-bodied Bordeaux or Côtes du Rhône wine for example, the Beaujolais is very easy to drink.

Appellations and the Best Beaujolais

Beaujolais Nouveau AOC, or “Young Beaujolais”, is one that did not have a reputation for being very good. Although it is technically part of the Region of Burgundy, it doesn’t have the same reputation as Burgundy wines. Aging doesn’t improve the wine much, and so a solution was necessary.

With a bit of a makeover and a marketing push, the arrival of the Beaujolais Nouveau is marked across France as the start of the Christmas holiday season. Today, this is the most famous of the Beaujolais wines.

The Beaujolais Nouveau is an occasion to get together with friends, so share it over a charcuterie platter.

Buy a bottle of Beaujolais here.

If you are looking for a higher-end Beaujolais, it is the Beaujolais Cru that you have to try. There are 10 types of Beaujolais Cru, with Brouilly and Côte de Brouilly being the most well known. The vineyards are planted on the slopes and around Mount Brouilly, giving them their name.

The Brouilly wines have an aroma of plums, strawberries, and red currents. The wine is meant to be imbibed when it is young. You can serve it with a light pasta dish, such as lasagna.

The other Crus to look out for are:

Buy a bottle of Fleurie and Morgon here.

From the chardonnay grape, the Beaujolais Blanc AOC has a light citrus taste. It is the only white wine in this area.

The Beaujolais Blanc goes well with lighter meals like a roasted chicken with fries.

The Beaujolais Rosé has light raspberry notes and is wonderful when served chilled on a warm summer’s day. It isn’t the most famous of the Beaujolais wines, and is not as popular as the Côtes du Provence rosés, but it is still widely imbibed. Why not serve it with a cake salé (savory cake) as an accompaniment?

Beaujolais is right in the heart of France, next to the city known as the gastronomical capital of France: Lyon. With many famed chefs working in Lyon, locals wines like the Beaujolais have been pushed to the forefront.

With beautiful medieval villages and haute cuisine nearby, a visit to the Beaujolais region is definitely worth your time. You can find more about tours and tour companies here.

Unlike Bordeaux and Burgundy wines grand crus which reach stratospheric prices due to vintages being kept for years, if not decades, the most Beaujolais wines will max out at a few hundred dollars in price.

But remember as always the French Government advisory, “the abuse of alcohol is dangerous for your health. Consume with moderation.”

Guide to Bordeaux Wines: The Region of Excellence