Skip to content
With discounts up to 20-40% in shop!
From flammekueche to choucroute, learn about the traditional Alsatian foods that are much loved by the locals. With starters, mains, desserts, drinks, and more. 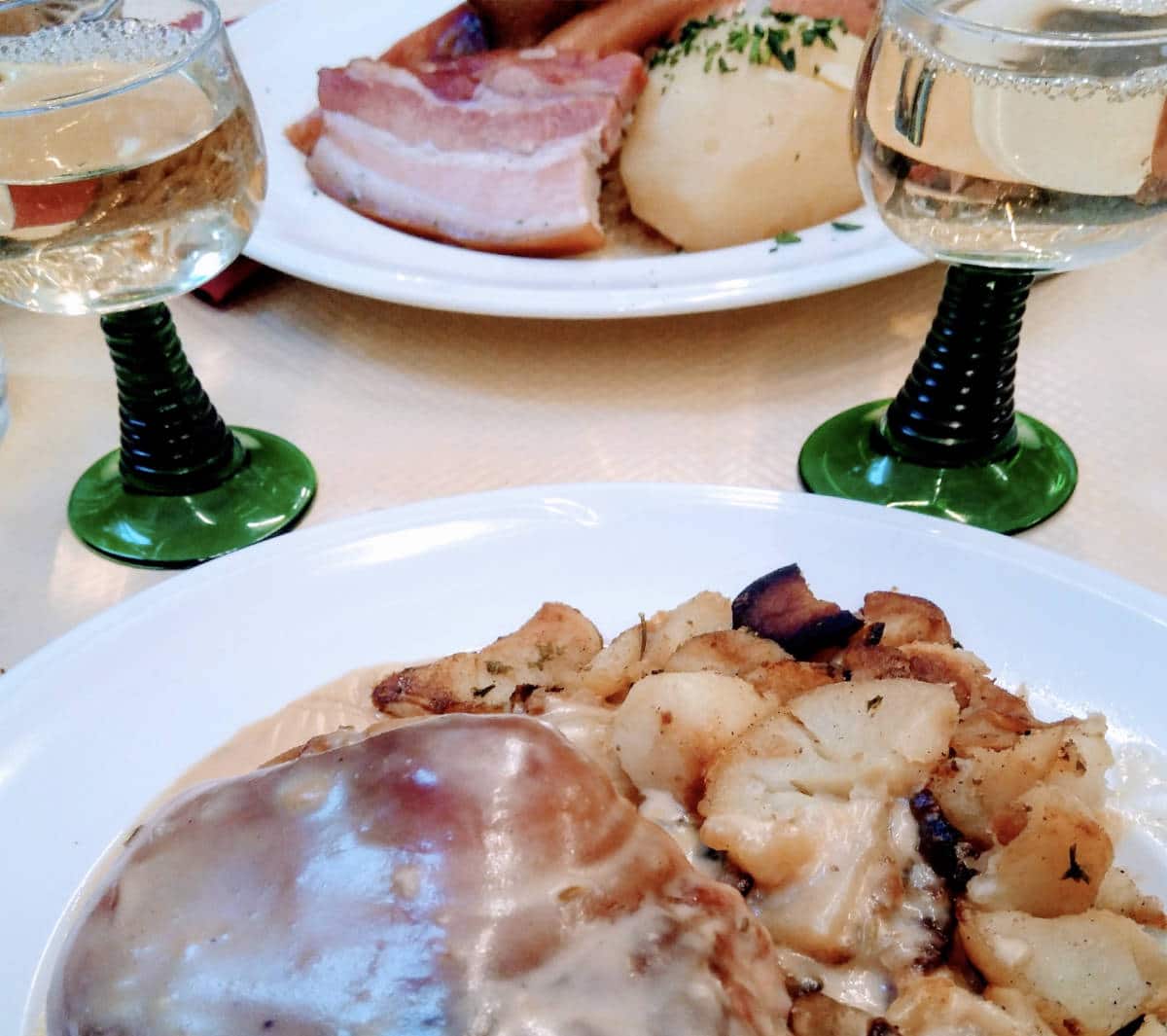 Alsace is a region in France with a rich culinary history. Located on the northeast along the border of Germany, it is a region that has been fought over by the two countries since the passing of King Charlemagne. And its food is representative of that conflicting history.

With a delicious mix of Germanic and French, the Alsatian cuisine is well-known for its variety of specialties, which range from the traditional choucroute (sauerkraut) and flammkuchen to wines and desserts.

The food here is hearty and filling, with lots of pork, cheese, beer and potatoes. From big cities like Strasbourg and Colmar, and the little villages like Ribeauvillé and Riquewihr, if you are a foodie on a trip to this part of France, be prepared to eat and drink your way through Alsace. Bon appétit!

You cannot come to Alsace and not have some sausages and choucroute on your bucket list of things to do. Heavily inspired by the German Rhineland next door, this dish is a classic in Alsace.

The sausages are usually made from pork or veal and are usually served with dijon mustard.

Choucroute is pickled cabbages cooked in white wine, beer or cider, similar to the German sauerkraut. Lightly seasoned, the choucroûte is served hot with boiled potatoes and a variety of meats including ham, bacon, sausages, smoked meats.

If you don’t eat meat sausages, you can also pair choucroute with salmon or trout.

If you like cheese and potatoes, there is nothing not to like about a tartiflette. This hearty meal has copious amounts of reblochon cheese and bacon lardons topped onto sliced potatoes. It is usually served as a main, but you can have it as a side as well.

If you are a connaisseur of French gastronomy, you will note that the ingredients in a tartiflette are suspiciously quite similar to that of au gratin potatoes.

In fact, the main difference is that for au gratin potatoes, you can use more or less whatever cheese catches your fancy, while a tartiflette must include the aforementioned reblochon cheese. You can get the recipe for tartiflette here.

Flammekueche, flammkuchen, or tarte flambée, this is a dish that epitomizes Alsace’s past, present, and future. While it may be called different names, it is a dish that is much loved by the locals.

It is basically a very thin pizza, which is traditionally topped with crème fraîche (heavy cream), thin-sliced onions and lardons.

These days, you don’t have to stick to the classic ingredients, it has been has widely adapted as the italian pizza with all sorts of ingredients.

Flammekueche restaurants abound across Alsace, so don’t hesitate to try all the different variations on offer.

Given the history of the Alsace region, wines from this area started off being heavily influenced by their next-door neighbor German wines. Centuries of wars does not help wine production. After the end of WWII however, wine production in this part of France has taken off.

And in recent decades, Alsatian wines have diverged in tastes from German wines, becoming sweeter and drier gaining wides-spread recognition.

Most of the wines produced in this area are white wines and they tend to be named after the grapes they are made of, like Reisling, Pinot Blanc, Pinot Gris, etc.

In general, the wines from this region are quite light and fruity. Wines like Reisling tend to be quite acidic, while the Gewurztraminer tends to be very sweet and served with desserts. There is also a crémant (sparkling wine) from Alsace that is quite popular.

The white wine from Vin de Savoie AOC is a light acidic wine and is a classic in France in the cold weather months.

The area is also renowned for its world-famous Alsace Wine route which you can travel through. You can read more about Alsace wines here.

French people don’t normally recommend snacking, but if you come to this part of France, don’t forget to snack on a pretzel (in French it is pronounced as bretzel).

It is a type of baked pastry made from dough that is commonly shaped into a knot. In Alsace, you can get it traditionally grilled with a bit of salt or sesame seeds, or gratiné (covered with cheese).

If you are looking for a dessert in Alsace, try the Kugelhopf cake (Gugelhupf in German).

In Alsace, it is a traditional cake with raisins made in bundt mold (compared to other versions with cocoa, lemon, etc). The raisins are sometimes soaked in rhum, so check before ordering if you don’t want it with alcohol.

The traditional recipe includes bacon lardons, cheese and cream, and plenty of it.

With a base of pie crust and egg, chefs everywhere can add any othr types of ingredient they want, such as spinach and cheese, salmon, leeks, etc. You can read the recipe for a quiche lorraine here.

Given its German heritage, it is no surprise that Alsace is the main beer-producing region in France. There are many breweries and microbreweries based in the region, and even an Oktoberfest celebrated every year.

There are many different beers and beer brands, so don’t be afraid to ask your bartender for a recommendation.

The Baba au Rhum is said to be invented by the same guy who invented French onion soup.

Ex-Polish King Stanislas (whose daughter Marie happened to be married to French King Louis XV) was in exile in the Alsace-Lorraine region, when he decided to take their traditional gugelhupf cake and douse it in liquor.

With a dash of cream, fresh berries and rhum, this dessert is one for the ages. You can get the recipe for baba au rhum here.

Eau de Vie literally translates to “water of life” and is not just one, but a class of digestifs. At about 40-45% alcohol content, it has a light fruit flavor.

Usually clear and colorless, this fruit brandy that can be produced from all types of fruits such as pears, raspberries, apples, plums, etc.

Two of the more famous Eaux de Vie are the Mirabelle plum liquor from the Alsace-Lorraine region and vermouth which is also considered an eau de vie.

Pain d’épices meaning “spiced bread” is popular delicacy in the Alsace and Champagne regions of France. It is a sweet bread baked with honey and various spices such as cinnamon, coriander, ginger, and star anise.

It is heavily influenced by the German  “Lebkuchen” which dates back to the 13th century. Similar to gingerbread, it is usually served at Christmas, along with a vin chaud (spiced hot wine).

If you enjoyed that article, you may want to read more about French food facts and other classic foods in France.

How to make a Bain Marie (cooking in a water bath)