Buschur ! or Hallo ! You may be able to tell, that is not French or German. Instead, it is a language called Alsacian, as we are visiting Strasbourg, France. But it could easily have been in Germany. Located on the border, with plenty of things to do, beautiful architecture and places to see, it is no wonder that both countries wanted the city so much.

One of the most beautiful cities in the world, this guide covers things to do Strasbourg France, what to see, eat, where to stay and more.

Warning: Now, if you are thinking of going to Strasbourg on a day-trip from Paris, let me stop you right here. Just because the city is easily accessible from Paris (2 hours by high-speed train) doesn’t mean you should. It is like visiting New York and going to Boston on a day trip. There is so much history and culture in Strasbourg that you would sell yourself short if try to squeeze it into a day trip from Paris. Its charm and vibe is completely different from Paris, and there is so much more to see around the French region of Alsace Lorraine.

Just my 2 cents, but let’s explore why, shall we?

One of the oldest gothic cathedrals in the world, along with the Notre Dame Cathedral in Paris. With its elaborate astrological clock and red sandstone surface, a visit to the Cathedral is a must.

During the middle ages, it was considered the tallest structure in the world. Heavily damaged by U.S. and British jets in World War II, renovations were only completed in the early 1990s.

At certain times of the year, there is a light show in the evenings, so be sure to check their schedule.

No list of the top things to do in Strasbourg could be complete without the historic center called La Petite France. These quaint little streets and half-timbered buildings date from the 16th and 17th centuries. If you like Instagram, this is where you will spend all your time. This is probably the most photogenic area, in a city that is quite photogenic in general.

Located on the west bank of the Grand Ile, the area was named not for patriotic reasons, but because of a syphilis hospital, then called Franzosenkrankheit (“French disease”) in German. Talk about killing the romance!

The Grand Ile is the large island that is in the heart of the city, and who can have an island without a few bridges? This area is dotted with many small bridges, some dating from the medieval age.

Les Ponts Couverts are a set of three bridges and four towers that were erected in the 13th century. You can walk across the Pont, which is usually open between 9-7pm. Access is free.

Right next to Les Ponts Couverts is the Barrage Vauban, which is a barrage constructed in 1690. It is basically like an artificial barrier that, in the event of an attack, can be lowered to raise the level of the river. This would flood all the lands south of the city, making them impassable to the enemy.

This defensive measure was deployed in 1870, when Strasbourg was besieged by Prussian forces during the Franco-Prussian War.

Another interesting thing to do is to visit the European Parliament building. This modern building is the official seat of the EU, where the ministers sit. It was chosen as a point of pride for France while also demonstrating the EU reconciliation with Germany.

Meanwhile, parliamentary committees were to have their meetings in Brussels and the Secretariat (its staff) are based in Luxembourg. This is all quite controversial since obviously it costs quite a bit of money to transfer people and resources to Strasbourg once a year, when Parliament is seated.

So visit it while you still can, because this modern building could soon be abandoned in favor of Brussels if costs continue to spiral!

Strasbourg has a large pedestrian shopping area, with many charming squares such as Place Kleber and Place de la Republique. There are several well-known shops in this area as well as restaurants with open-air terraces that are always open to customers. Put on your walking shoes and warm up your credit card!

7. Boat cruise on the Rhine River

Take an hour-long cruise along the Rhine River, which goes past all the main sights of the city. With headphones, you can listen to commentary in any language you want (even Alsacien!). Departure point is near the Notre Dame Cathedral, just behind Palais Rohan.

There are many museums in Strasbourg, but with the town’s beautiful architecture, I confess, we were more taken on our last visit with sightseeing than visiting museums. However, if you choose the following museums are excellent:

9. The Sausages and Choucroute

You cannot come to Alsace and not have some Sausages and Choucroute on your bucket list of things to do. Choucroute is pickled cabagges cooked in white wine, similar to the German sauerkraut. If you don’t eat sausages, you can also pair the Choucroute with salmon or trout.

Wash down your meal with some local Reisling white wine or have a beer. Alsace is the main beer-producing region in France, with many breweries and microbreweries based around the city. There are many different beers, so don’t be afraid to ask your bartender.

The area is also renowned for its world-famous Alsace Wine route, producing many different types of wines. To make the most of your visit, here are some options that should book in advance, so that you don’t miss out:

How to get to Strasbourg, France?

It takes a little under 2 hours to get to Strasbourg by high-speed train, from either Paris or Frankfurt. The city is the seat of the European Parliament (which you can visit) and other European institutions.  The city also has a small international airport, with flights from neighboring cities in Europe and Northern Africa.

I would recommend spending at least 2 nights in the city. Some people try to squeeze this all in a day trip from Paris, but I don’t recommend this. It is so different from the other parts of France and there is so much to see, that I recommend at least 2 days of visiting, including the day you arrive.

What day trips are recommended in the area?

Yes, there are many lovely villages around as well as a wine route. You can visit the Haut-Koenigsbourg Castle, wander through nearby villages of Ribeauvillé, Riquewihr, and Kayserberg. I recommend taking a tour to make the most of your visit.

Strasbourg is lovely at any time of the year. There is a famous Christmas market in December which is magnificent, but if you don’t like crowds, it is better to go at another time of the year.
Summers are warm and lovely, but beware the tourists. With fewer crowds, Fall or Spring are absolutely lovely in the city. Note, there is a mini-Oktoberfest or “Fête de la bière” in Strasbourg, influenced by its German neighbor.

The pedestrian area in the city is quite walkable, so anywhere around there is quite accessible. The city is usually considered quite safe to walk around at night, but as in all things, common sense applies!
I would recommend staying between Strasbourg Cathedral and the train station, such as:

If you do happen to be in Alsace in December for the Christmas markets, be sure to make a stop in Lyon as well. Lyon has an excellent light festival running the 2nd week of December, so I definitely recommend making a stop there as well.

So have you been inspired to travel to Strasbourg? What are you looking forward to the most? Comment below and let me know! 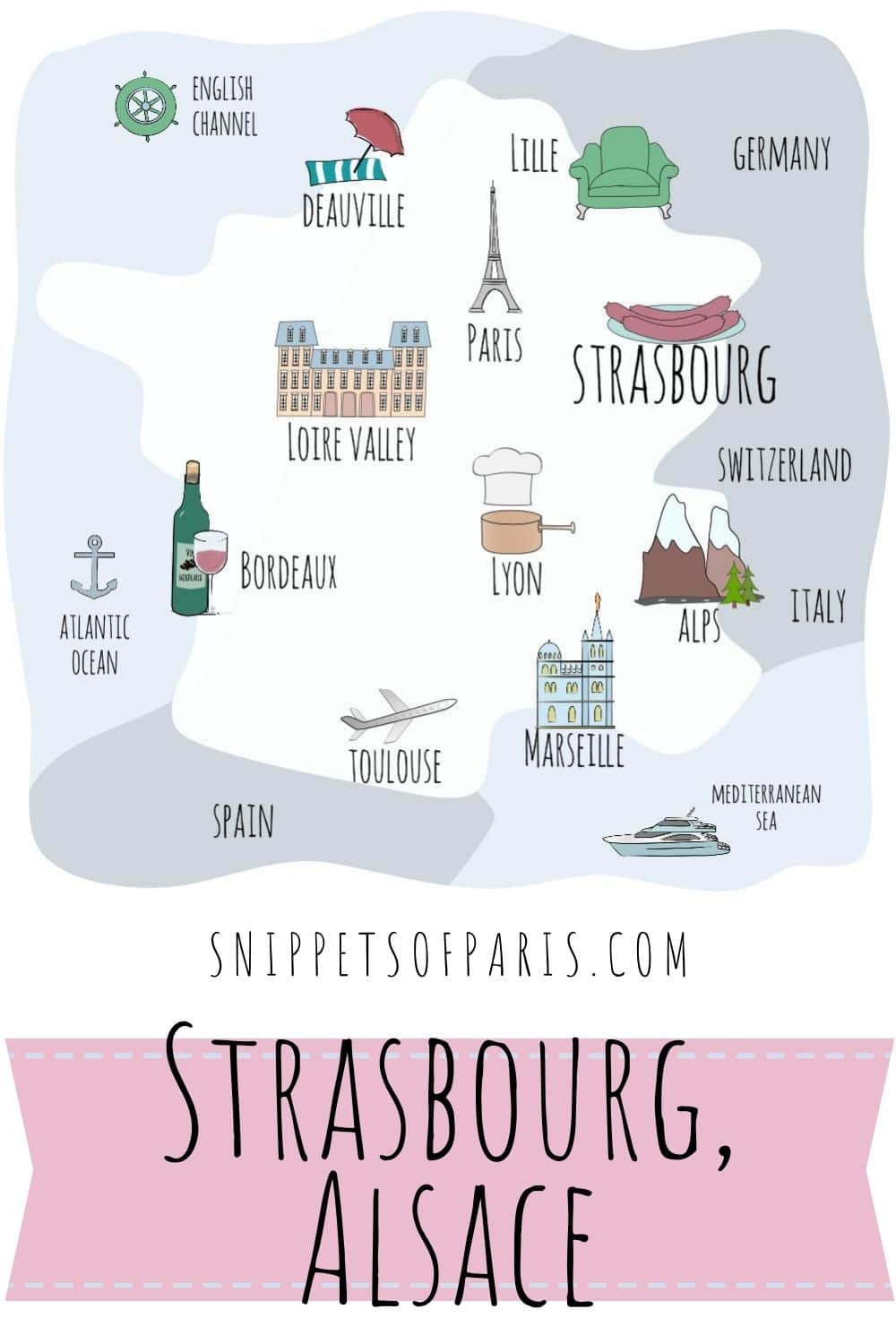