Skip to content
With discounts up to 20-40% in shop!
Visit Colmar is the medieval village in Alsace Lorraine. Our guide covers things to do in Colmar France including, where to stay, what to eat, drink and more.
(As an Amazon affiliate, we may earn commissions for certain purchases. Please note, all information is provided for entertainment purposes only. See our disclosure policy for details.)

For a small town that has had foreign armies invading continuously through the course of history, Colmar has certainly kept its looks. With its colorful half-timbered buildings, charming canals, this is a village in the Alsace that is full of medieval charm. With plenty to see and things to do, a stop in Colmar, France has to be a must on your Travel Bucketlist.

The city is beautifully preserved and restored, even though it has been conquered and reconquered by French and Germans armies at least 4 times in the past 250 years. Along with the rest of Alsace, the town was annexed by Germany in 1871 during the Franco-Prussian War. It returned to France after World War I as per the 1919 Treaty of Versailles and was re-annexed by Germany in 1940.

It finally reverted back to French control in 1945 as the last French town freed at the end of WWII. You can read more about French history here.

Walkthrough the delightful Old Town to get a feel for the village. The town was apparently the inspiration for Disney’s Beauty and the Beast, and it is not surprising to see why.

It has the medieval half-timbered look we all can recognize, but goes a step further. Rather than a bland white and dark timber look of the Tudors-style, the houses in the Old Town are several shades of pastel.

Colmar has many small canals reminiscent of Venice in Italy. These canals are mostly lined with private homes, but there are plenty of hotels and restaurants as well. Have lunch or an early dinner on Quai de la Poissonnerie to take advantage of the sunset views.

You can also take a cruise on a 30-minute boat excursion from near the quai, at the foot of the bridge Saint Pierre.

Rue Berthe-Molly used to be known as Rue des Juifs (Street of the Jews). Its medieval architecture is beautiful, but as you walk around it is also a place to remember this region’s sad history. Throughout history, war and religious persecution were strife in the area.

It was on this street in 1863 that a treasure hoard, known as the Colmar Treasure was discovered, believed buried by a Jewish family in early 1349-50.

Around 1349, when the plague struck the city, the townspeople accused the Jews of poisoning the wells. With Rue de Juifs being the Jewish quartier, the area was prime for attacks. Colmar massacred its Jewish citizens, and appropriated their belongings. The first Jewish community in Colmar, thus disappeared around 1360.

The Colmar Treasure was discovered in 1863 in the wall of a house in the medieval Rue des Juifs, and is displayed today at the Musée de Cluny in Paris. It is a collection of precious objects with one of the last remaining examples of a Jewish Marriage Ring.

Another famous old house is the Pfister House, a beautiful 16th-century building that is partly wooden.

The paintings on the facade are scenes inspired by the Bible and the Old Testament as well as portraits of Germanic emperors. Pfister House is open every day from 10 am for visits. Access is free.

Eglise Saint Martin in the Old Town is a large Gothic style church entirely made of pink stone. The old church that stood on the spot was constructed around the year 1000AD, but the current building was constructed between 1234 and 1365.

A sad detail to note is the presence of two Judensäue (folk art denigrating Jews), a testament to the anti-semitic history that occurred in the city.

The Maison des Têtes is a marvelous old house, one of the oldest in Colmar. The house was built in 1609 in Rhineland Renaissance style on behalf of the wealthy merchant, Anton Burger. The part that is really interesting is that it was constructed with the 111 heads (masks) that adorn its façade.

Today, it is a luxury hotel that you can stay in so if you are keen on an interesting experience, make your reservation here.

7) Snack on a pretzel

French people don’t normally recommend snacking, but if you come to this part of France, don’t forget to snack on a pretzel (in French it is pronounced as bretzel).

You can get it traditionally grilled with a bit of salt or sesame seeds, or gratiné (covered with cheese).

A museum housed in a medieval convent. The main highlight is the beautiful Isenheim altarpiece by Gruenewald, an Alsatian painter dating from the Renaissance. The collection also includes a couple of paintings by Renoir and Picasso.

Marché Couvert is a charming indoor market constructed in 1865. Today it is a farmers’ market and epicerie fine with quality fresh fruits and vegetables for sale.

There are also butchers, cheese shops, bakeries, and other delicatessens. It is open every day except Mondays.

There are several flammekueche restaurants in the city, so you have to try those when you are here. It is basically a very thin pizza, which is traditionally topped with crème fraîche (heavy cream), thin-sliced onions and lardons.

If you are looking for some fun, head over to the Toy Museum. The museum showcases toys from the 19th century to the present day. The Museum is open every day except Tuesdays.

Try the Kugelhopf cake for dessert. It is a traditional cake with raisins made in bundt mold. The raisins are sometimes soaked in rhum, so check with your waiter if you don’t want it with alcohol. You can read more about foods and drinks in Alsace here.

13) Statue of Liberty and Musee Bartholdi

Note: the museum has limited hours, and does not have an elevator. Check timings and access before visiting.

14) Sit on a terrasse and try some Reisling wine

Colmar is part of the famed Alsacian wine route with many different types of wines, so sit at a terrasse and enjoy a glass.

Its most popular wine is the Reisling, a white grape variety of a German tradition. The Alsace version of the Reisling is usually a dry wine, compared to the German variety which is usually sweet. You can read more about the wines from Alsace here.

15) Visit the villages around Alsace

There are many lovely villages in the area, in addition to the wine route. To visit the nearby towns of Eguisheim, Kayserberg, Ribeauvillé, and Riquewihr, as well as go on a wine tasting, I recommend taking a tour to avoid the hassle of getting lost.

In addition, Colmar is very close to the German and Swiss borders so you can even take a tour to enjoy a taste of all three countries in one day.

The best area to stay in Colmar is near the Old Town. From here, the top attractions are easily walkable. With its burbling stream, ancient cobblestone streets and this is French village charm at its finest. The following hotels are quite centrally located and offer good value:

How to get to Colmar?

The Colmar airport is only for small private planes, so the nearest international airport is EuroAirport Basel Mulhouse Freiburg (BSL) with connections from across Europe and the world. Note, the airport is in French territory, but it is jointly operated by France and Switzerland. So when you arrive, head towards the French exits.

There are also several high-speed TGV trains arriving at nearby Strasbourg from Paris, Amsterdam, London and beyond. Once in Strasbourg, it is about a 30-minute TER train from Strasbourg to Colmar.

I would recommend spending at least one night in Colmar. The old-world ambiance of the village at night is not to be missed. There are also several day trips that you can take from Colmar, so plan to give yourself that time.

When is a good time to visit?

If you enjoyed that article, you may want to read more about traveling around Alsace. And don’t forget to say “s’gilt” in Alsatian when you cheers with a beer! 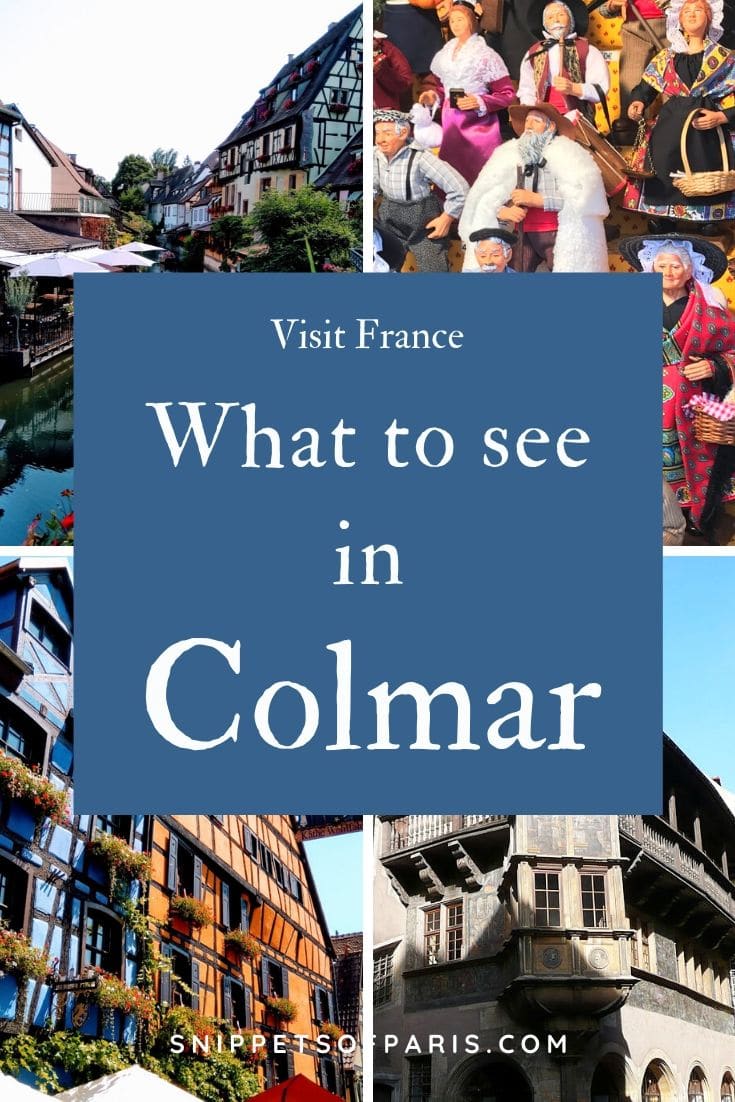 11 Alsatian foods (what to eat and drink)

History of Alsace: The Region that shaped Europe