Skip to content
With discounts up to 20-40% in shop!
After a big meal, you need something to help you digest it all. Get the list of the best French digestifs, their alcohol content, how to serve them, and much more. 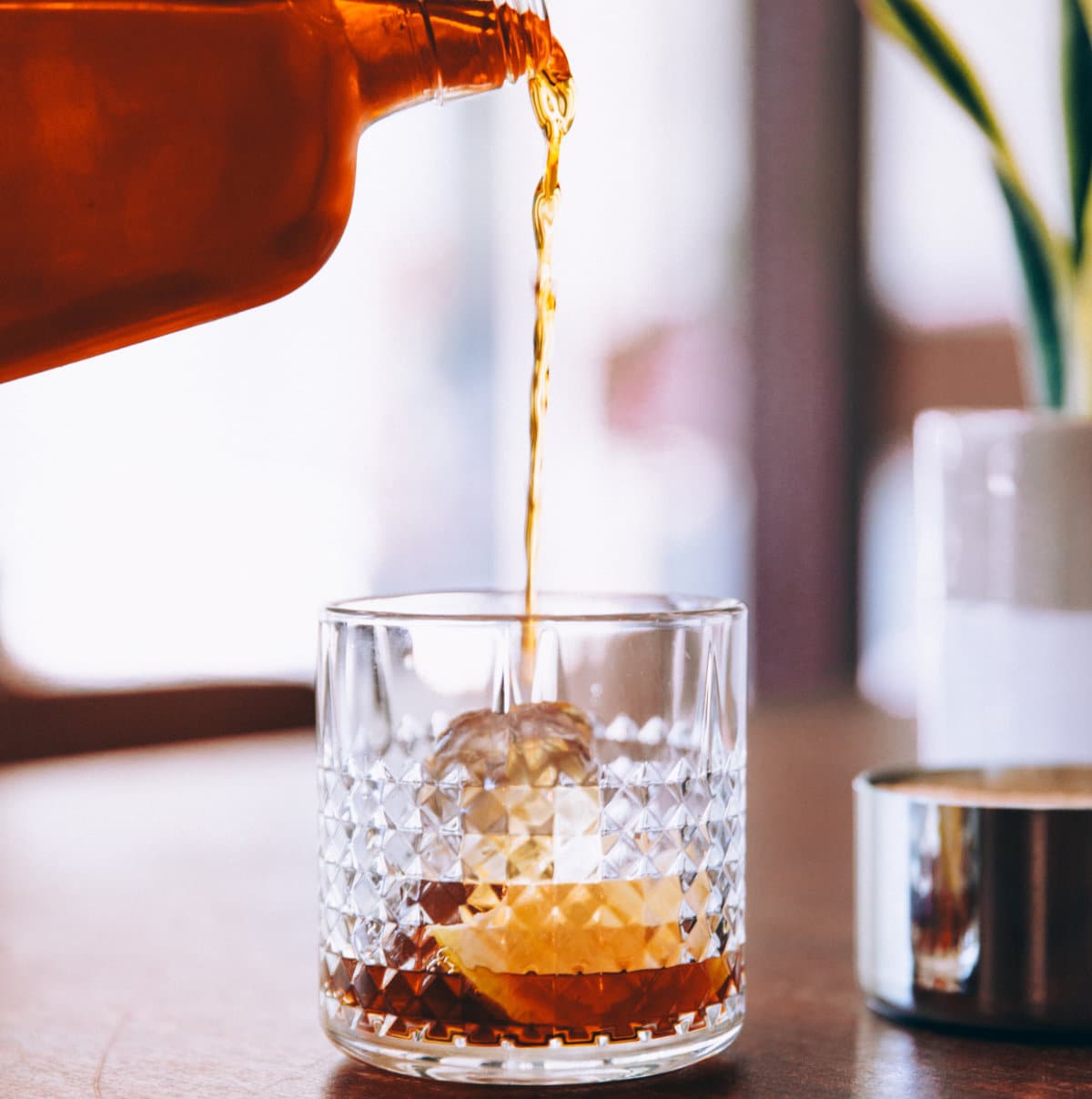 Photo by Brodie Vissers
(As an Amazon affiliate, we may earn commissions for certain purchases. Please note, all information is provided for entertainment purposes only. See our disclosure policy for details.)

You might have guessed from the french word: digestif, meaning “to digest”. The typical dinner in France tends to be very long. With several entrées, mains, bread, fruits, and cheeses, the French have realized over the years that you need a strong alcoholic after-dinner drink afterward to wash it all down.

While aperitifs are designed in a way to wake up the palate and leave you wanting more, digestifs are richer with a high alcohol content to soothe and relax and put you in the mood to unwind.

It goes back to the bygone era when men retired to their cigar-filled library for one last drink before heading back to wives for the night, as the stereotype goes. Not to worry, today everyone can happily indulge in the digestif. Although with some liquors having more than 30% alcohol, you may want to pace yourself!

North Americans are not all that familiar with digestifs, because we tend not to have very long meals. Just think thanksgiving, but every day not only once a year. The idea to reduce that bloated feeling, while at the same time enjoying a moment of conviviality with your dinner partners.

However, as with all alcohol notices in France, we must disclaim:

Translation: The abuse of alcohol is dangerous for your health. Consume with moderation.

So with that, let’s get to the best digestifs in France, shall we? Allons-y!

Génépi is one of those that can be enjoyed as an aperitif or a digestif since it is not very sweet. It is traditionally from the Rhone-Alps and Savoie region of France (around Lyon) in the center of France. After a long day of skiing in the mountains followed by a cheesy fondue or raclette, a génépi is the perfect digestif to finish off the day.

You can even make Génépi at home by steeping the aromatic flowering tops of the herb artemisia in vodka or pure grain alcohol.

Serve chilled or on ice, usually in winter when it is cold outside. You can also mix it with tonic or sparkling water.

Buy a bottle of Génépi here.

Absinthe at 45-75% alcohol, is one of the most potent digestifs out there. Legend has it that it was created by a French doctor named Pierre Ordinaire as a miraculous cure-all in the late 1790s. Most commonly remembered for being a favorite of the artist Vincent van Gogh, it became popular when it was given to French troops to prevent malaria.

The taste is quite bitter, so it is not to everyone’s tastes. The original recipe contained methanol and was accused of inducing all sorts of paranoia, including the one which led Van Gogh to cut off his own ear.

It was banned in 1914, before a new formula was relaunched in 2000 under the brand name l’Absente.

How to serve Absinthe

There is a ritual to preparing absinthe that is part of the tradition.

Buy a bottle of absinthe here.

Cognac is a type of brandy that comes from the French region of Cognac (similar to Champagne which can only come from the Champagne region of France).

After the grapes are pressed, the juice fermented for a couple of weeks with wild yeast from Cognac converting the sugar into alcohol. It is then distilled and aged in Limousin oak casks for at least two years.

The cognac is blended with different cognacs from different years by a master blender (maître de chai) to come up with the perfect taste before it is sold to the public. The age of the cognac is calculated by the youngest ingredient.

How to serve Cognac

Cognac has a rich and sweeter taste compared to some of the herbal liquors so it is normally served at room temperature. It is traditionally served in a tulip or balloon shape glass so that it interacts with the air.

There are two schools of thought on how to digest a cognac. One side says you should heat it up by holding the glass with the palm of your hand for several minutes before drinking, while the other side says you can add a couple of ice cubes if you find the alcohol too strong. A toi de décider (it is for you to decide).

Buy a bottle of cognac here.

☞ READ MORE: Top things to do in Cognac (besides drinking)

Similar to Cognac, Armagnac is an aged brandy is produced from grapes in the French region of Armagnac, near the foothills of the Pyrénees mountains (near Spain). The area it is produced in is much smaller, however, which is why it is not usually exported outside of France, and thus not as well known.

For French people though, it is Armagnac that is more popular, being the oldest French brandy, which used to be consumed reputedly for “therapeutic benefits”.

How to serve Armagnac

Like to cognac, it should be served in a balloon-shaped glass at ambient room temperature. Armagnac needs to breathe, so it should be poured into the glass about 15-30 minutes before digesting.

Buy a bottle of Armagnac here.

Another aged-liquor from the French family of brandies is the apple-brandy Calvados from the Basse-Normandie. It can be served as an apéritif or a digestif.

The apples are pressed and fermented into a cider, which is then distilled twice. The remaining eau de vie must be aged for at least two years in oak casks before it can be called Calvados. As Calvados ages, it becomes smoother so the price will be a function of the price.

How to serve Calvados

Calvados is served either dry or with ice, usually in a balloon or wine glass. In France, it is usually served by itself as a digestif, or with a cheese plate after the main meal.

Buy a bottle of Calvados here.

Eau de Vie literally translates to “water of life” and is not just one, but a class of digestifs. It is a clear and colorless fruit brandy that can be produced from all types of fruits such as pears, raspberries, apples, plums, etc.

How to serve Eau de Vie

Usually served ice-cold in a tumbler, after an hour in the freezer.

Cointreau is probably best known as an ingredient in margaritas and cosmopolitans. But it actually can be imbibed by itself as an apéritif and a digestif. It is an orange-flavored triple sec (dry) liqueur that was created in 1875 in Saint-Barthélemy-d’Anjou in the Loire Valley by the Cointreau brothers.

It has 40% alcohol content and is made using a mix of sweet and bitter orange peels and sugar beet alcohol, giving it an orange flavor.

How is Cointreau served

When served as a digestif, Cointreau is usually served neat or on with ice cubes in a balloon glass.

Buy a bottle of Cointreau here.

Chartreuse is famously made by Carthusian Monks located in the Chartreuse Mountains near Grenoble in France. It is said that only 2 monks know the exact recipe combination of the 130 herbs, plants, and flowers as per the instructions given to them by François Annibal d’Estrées in 1605.

The monks managed to keep the recipe to through themselves through several centuries of religious persecution, wars, and even a mudslide in 1935 that destroyed their distillery.

There are two main types of Chartreuse produced today, yellow which is milder, and a stronger green version. The coloring of both comes naturally from the herbs and the plants used. It can be served as an aperitif or a digestif.

How to serve Chartreuse

When served as a digestif, it is usually served on the rocks in a tall glass.

Buy a bottle of Chartreuse here.

If you prefer to skip dessert, a sweet fruity liquor may be what you are looking for. Grand Marnier is an orange-flavored liqueur created in 1880 by Alexandre Marnier-Lapostolle in the Cognac region of France. It blends Cognac brandy with bitter oranges and sugar, to come up with its own digestif.

Grand Marnier Cordon Rouge is 40% alcohol, but since it is so sweet, it is also often used as an ingredient in desserts such as pastries, cakes, crêpe flambée, and even the traditional French Christmas cake.

How to serve Grand Marnier

A Grand Marnier is usually served at room temperature with an orange slice perched on the glass. However, there are many cocktail recipes as well such as simple mixes with:

Similar to Chartreuse, Bénédictine is also reputed to made from the original recipe of Benedictine monks in Normandy, which was lost in the ashes of the French Revolution.

Instead of 130 different varieties, Bénédictine is made with twenty-seven flowers, berries, herbs, roots, and spices, it was first marketed by wine merchant Alexandre Le Grand in the 19th century.

Today it is also used in several cocktails such as the Big Ben and Singapore Sling, and confectionaries and dishes from Normandy.

How to serve Bénédictine

As a digestif, Bénédictine is usually imbibed in combination with brandy. Known as a B&B, combine one part Bénédictine with one part Brandy in a brandy snifter.

Buy a bottle of Bénédictine here.

A traditional digestif from Provence, liqueur de Farigoule goes down smooth after a heavy meal. It is not as widely available as the other better-known digestifs, but if you ever make a trip to Marseille or other cities in Provence, it is a must.

How to serve Liqueur de Farigoule

You can serve it directly in a balloon glass or with ice.

A ratafia is a sweet alcoholic drink, obtained by infusing and extracting the flavors of plants, fruits, or nuts in an alcohol. It is made in other regions of France as well as Corsica, including in Champagne and Burgundy.

For nuts, they will first be removed from any shells, softened in boiling water and then dried. Fresh fruit is usually pealed and then cut into pieces.

It will be covered with sugar, brandy, a little water, in their tightly sealed container, and left for months, if not years. The result is a lusciously sweet liquor that is served as a digestif or an apéritif.

How to serve Ratafia

Ratafia is usually served in a tumbler at a cool temperature, without ice.

Buy a bottle of ratafia here.

So are you leaning more towards a herbal absinthe or a rich and smooth armagnac? If you enjoyed that article, you may like to find out more about French liquors that are aperitifs here. 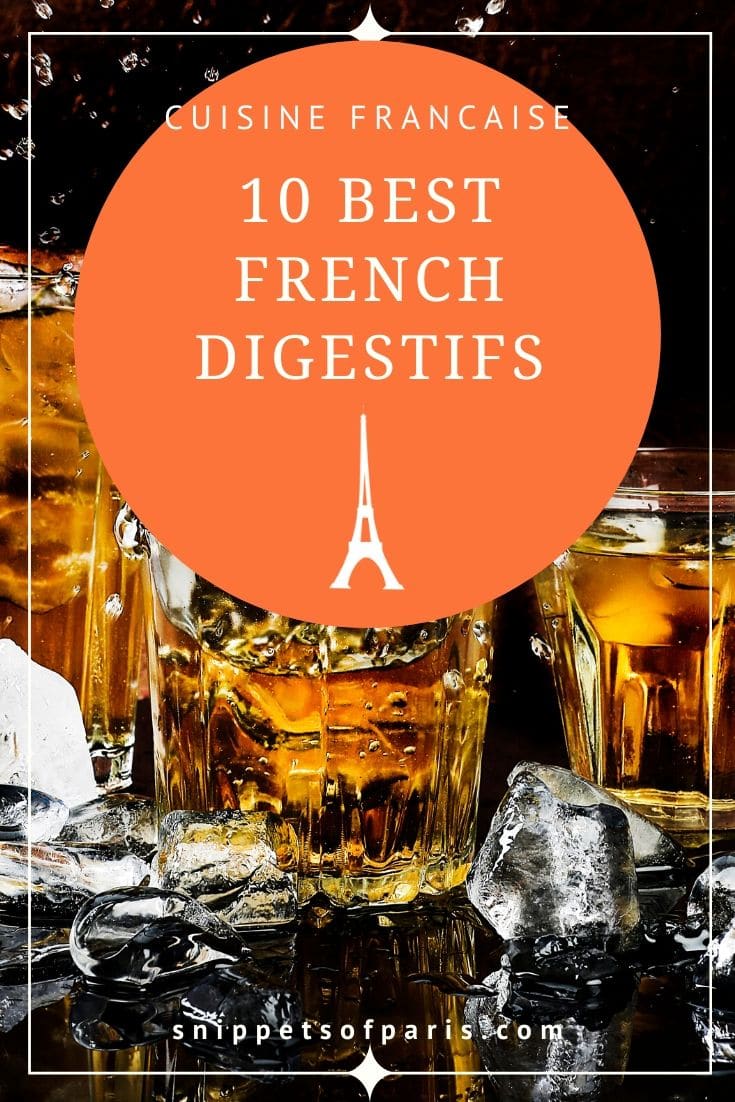 Stocking a French Pantry: 46 Ingredients and Staples you will need

13 Food in Brittany: What to eat and drink in Bretagne