Skip to content
With discounts up to 20-40% in shop!
From the figatellu to fiadone, learn about the traditional food in Corsica that is much loved by the locals. With cheeses, desserts, drinks, and more. 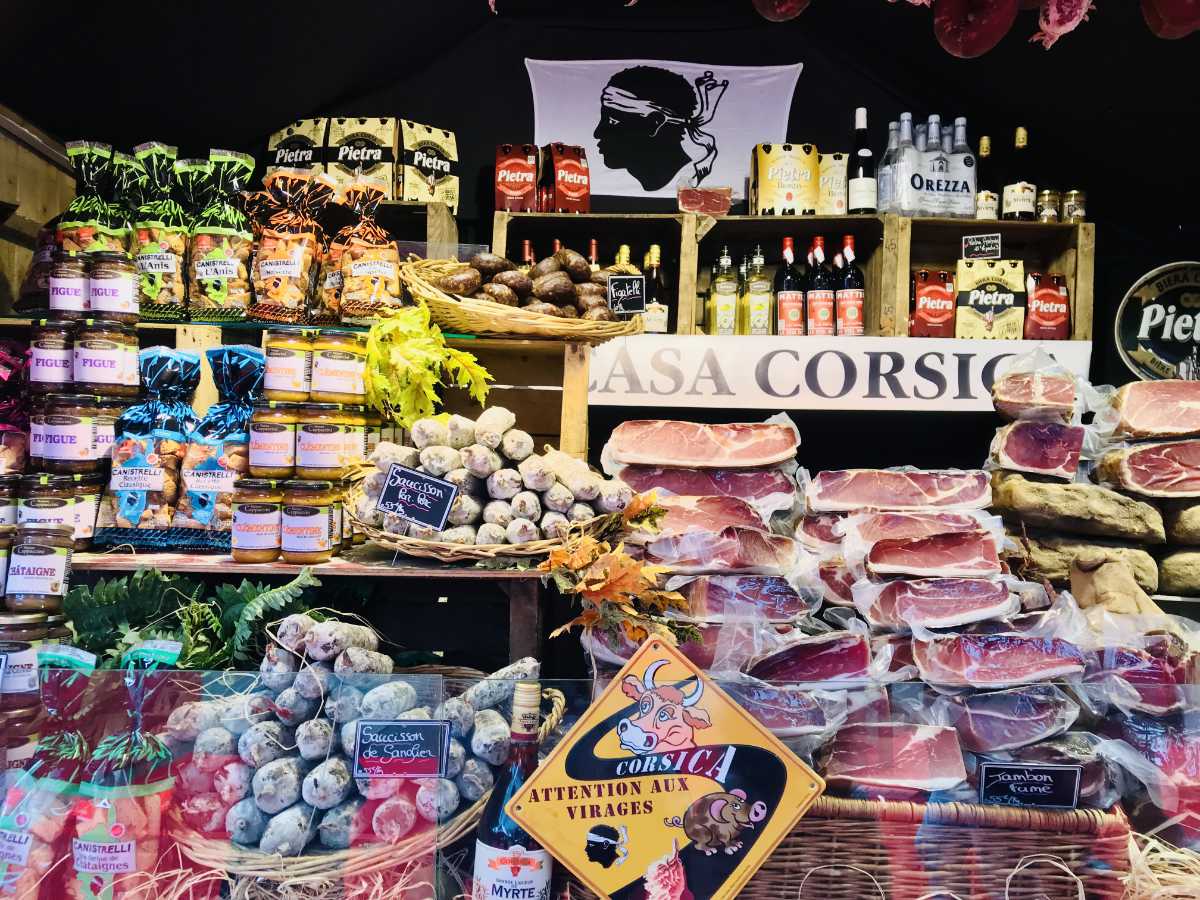 Food is an integral part of Corsica’s cultural identity. This small French island in the Mediterranean sea is just off the coast of Provence and next to the Italian island of Sardinia.

So as you can imagine, the island’s food and drink reflects the many cultures that have passed through its shores over the centuries with influences of the Genoan, French, Italian, Catalan, Spanish, and Provençale cuisines.

Its most famous son was of course, Napoleon Bonaparte, who grew up on the island with Corsican cuisine that is traditionally simple and homely, a far cry from his future role as Emperor of France.

With dried meats and seafoods being considered traditional Corsican specialties, this blend of Mediterranean and traditional French cuisine is unique in France. You may be able to find some of this dishes on the mainland, especially in nearby Provence, but for the true experience, there is nothing like spending a few days on the L’Île de Beauté (meaning “the Isle of Beauty”) as it is nicknamed.

So from Bastia to Ajaccio, if you are a foodie on a trip to this part of France, be prepared to eat and drink your way through Corsica. Bon appétit!

The island of Corsica is very famous for its dried meats, the most famous type which has to be the figatellu (or the plural “figatelli”). It is a dry sausage composed mainly of pork meat and liver.

All over Corsica and in the south of France, you will find the figatelli added to dishes like pizza, pasta, or salads. Other popular charcuterie meats from Corsica include:

Being an island, seafood is part of the culture in Corsica. You will find a variety of seafood on restaurant menus across the island, such as red mullet (rouget), sea bass (loup de mer) and lobster (langoustine).

Oysters (huitres) are also very popular. Most dishes are served with simply, baked or boiled, with a sauce on the side.

Each region of France has its own wine, and Corsica is no different. Vin de Corse AOC is a protected appellation of Corsican wines that covers around 45% of the local wine production.

Red and rosé wines here must include at least a 50% composition of Nielluccio, Sciacarello and Grenache grapes. The white wines are composed primarily of Vermentino grapes. You can read more about picking a French wine bottle here.

The typical signature dish of the Corsicans is the sanglier, meaning wild boar in English.

It is a slow-cooked stew, similar the beef bourguignon with the boar, mixed with vegetables like onions, carrots, garlic, and chestnuts, along with eau de vie alcohol and red wine.

The red wines used in traditional civet de sanglier recipe are usually full-bodied ones from Corsica, Côtes du Rhône, Châteauneuf-du-Pape, Bordeaux, or Burgundy. The stew is usually slow-cooked for at least 24 hours before being served.

5. Brousse and other cheeses

Brousse cheese comes from the Provençale/Corsican appelation brousso and is a white and lumpy whey cheese made of whey from cow, sheep or goat milk.

It is used in several recipes like the starter courgette à la farcie (stuffed zucchini boats) or the corsican dessert the fiadone (more on that later).

Now, brousse is very easy to find across France, so even if you don’t make it to Corsica, you can still try this lovely cheese, even with a simple baguette.

Other popular cheeses from Corsica include:

Like the civet de sanglier, the veau aux olives is also a stew, this time with veal and olives. It is however not cooked as long as the boar, as veal is much less gamey and only requires a couple of hours.

It is usually cooked with tomato concentrate, flour, salt, pepper, lardons, and spices.

The fiadone is a Corsican tarte made normally with the brousse or ricotta cheese, grated coconut, a hint of lemon and vanilla.

It is normally very light and fluffy and goes down well on a hot summer’s day, which is why you find it typically in the South of France.

Châtaigne, meaning chestnuts in English, is widely grown on the island, so many local dishes actually include chestnut flour, rather than regular wheat or corn flour.

Known as farine de châtaigne corse, chestnut flour is used in dishes like the fiadone, or the fritelle which is a beignet pastry from Corsica.

Another popular chestnut dish in Corsica, is the marron glacé or glazed sugar chestnut. It is usually enjoyed as a candy or as part of the 13 desserts of Provence for Christmas.

A ratafia is a sweet alcoholic drink, obtained by infusing and extracting the flavors of plants, fruits, or nuts in an alcohol. It is made in other regions of France as well as Corsica, including in Champagne and Burgundy.

For nuts, they will first be removed from any shells, softened in boiling water and then dried. Fresh fruit is usually pealed and then cut into pieces.

It will be covered with sugar, brandy, a little water, in their tightly sealed container, and left for months, if not years. The result is a lusciously sweet liquor that is served cool as a digestif or an apéritif. You can try a bottle of ratafia here.

Quiz: Do you know your French Cuisine?

Coq au Vin in Instant Pot: With or Without Wine (Recipe)