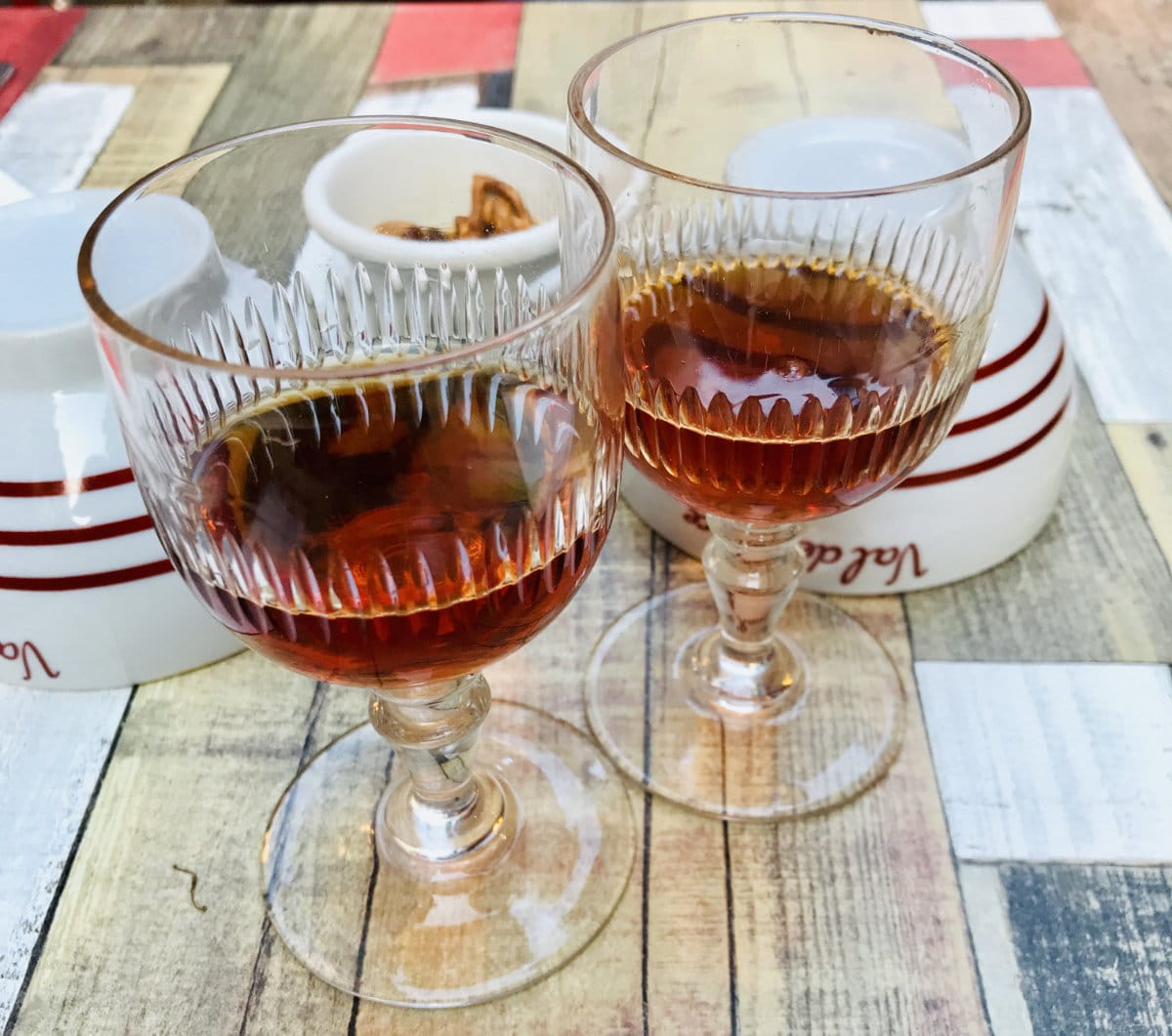 France is the land of the apéro. Lazy long evenings spent with family and friends, eating, drinking, and making merry. So it stands to reason that there are many French apéritifs here to indulge in.

In France, cocktails are not usually served with dinner. It is usually just wine and water. So the only time to have a cocktail or another liquor is for an apéritif. It is meant to stimulate the senses and leave you wanting more.

Traditionally from Provence, Pastis de Marseille is the apéritif that in a favorite all over France. You will easily find it on the menu of every French bar, brasserie, and café (and if you don’t you should question their french credentials!)

How to Serve Pastis

Serve the about 1 oz of pastis in a tall glass to your guest, along with a carafe of water. Your guest will pour the water into the glass and add the ice cubes, depending on how strong he/she wants it. The liquid will turn into a cloudy yellow color, meaning it is ready to drink. A normal serving of pastis would be about 1 part pastis for 5 parts water.

Buy a bottle of Pastis here.

Along with Pastis, Kir is also an apéritif that you will find on every menu around France. There are a few variations of kir depending on the region:

Normally a white wine like aligoté from Burgundy, or a crémant from Loire is used as the base for kir.

Crème de Cassis is a sweet liquor that is made with blackcurrant. You can also use other crème liquors like Crème de Chambord (raspberry) or Crème de Pêche (peach), if you prefer.

How to serve Kir

Fill the glass normally with the wine, champagne, or cider chosen. Then add 2-3 tablespoons of crème de cassis. Kir is normally served chilled in a champagne or wine glass.

Buy a bottle of Aligoté and Crème de Cassis here.

Dubonnet is famous for being the drink of choice of Queen Elizabeth II, who has a glass at lunch every day. She has a cocktail of two parts Red Dubonnet and one part gin with two cubes of ice and a lemon slice, but you can drink it as a simple apéritif as well.

It comes in white and red, and was originally marketed in the mid 1850s as a way to combat malaria. The name is a play on words in french “du bon, eh?“, or “it’s good, right?” The liquor itself is sweet, with a blend of fortified wine, herbs, and spices.

How to serve Dubonnet

It is usually served in a glass tumbler with a couple of ice cubes and, if you prefer, zest of orange. You can also add sparkling water or club soda if you prefer.

Buy a bottle of Dubonnet here.

Suze originates from the Jura region of France. The Original has a strong taste of gentian, the herb that is used to make it, but you can also get flavored Suze:

How to serve Suze

You can serve Suze directly with a couple of ice cubes, but this might be a bit bitter. It also goes well with sparkling water, tonic water, sparkling wine, or lemon juice.

Buy a bottle of Suze here.

In France, we don’t only save the champagne for New Year’s Eve. Champagne is an excellent aperitif that you can enjoy on any occasion. If you don’t have a “champagne budget”, try a crémant.

A crémant is a sparkling wine that is very similar to champagne, but with a much lower price tag.

How to serve Champagne

Champagnes and crémants are usually served chilled in a champagne glass.

Chartreuse is one of those liquors that can be served as an apéritif or a digestif. It is said that only 2 monks know the exact recipe combination of Chartreuse, with its 130 herbs, plants, and flowers.

There are two main types of Chartreuse, yellow which is milder, and a stronger green.

How to serve Chartreuse

When served as an apéritif, it is usually served in a tall glass mixed with a fruit juice like lemon or orange. You can also mix it with tonic, or gin, with ice cubes.

Buy a bottle of Chartreuse here.

Picon is another apéritif from Marseille, although it doesn’t taste at all like Pastis. It was invented by a young soldier named Gaétan Picon, who invented a mixture of orange zest, cinchona, and gentian mixed in brandy in the mid-1800s. Sugar and caramel are also later added to the recipe.

How to serve Picon

Picon is traditionally mixed with beer, but you can also mix it with white wine. The usual addition is around 3cl for 25cl of beer or wine. You can also purchase Picon beer which is already mixed.

Buy a bottle of Picon here.

Representing Cognac and the region of Charente-Maritime in the apéritif competition is the Pineau des Charentes. It is a fortified wine made from unfermented grape juice and cognac.

Legend has it that a winemaker in the late 1500s accidentally created it by adding grapes to what he thought was an empty barrel, but actually contained cognac. He left it to ferment and a few years later, found that it had turned into what is today Pineau des Charentes. It comes in a variety of flavors and often has fruit such as pears or pine added to it.

How to serve Pineau des Charentes

Calvados is an aged-liquor that is is an apple-flavored brandy from the Basse-Normandie. It can be served as an apéritif or a digestif.

It is part of the family of Eau de Vie (meaning “water of life”) so you can see how important it considered. The earliest reference to Calvados was in the 1550s. Apples are pressed and fermented into a cider, which is then distilled twice. It is then aged for at least two years.

How to serve Calvados

Calvados is served either dry, usually in a balloon or wine glass. You can serve it on ice if you prefer, (although you might offend a hard-core Norman)!

Buy a bottle of Calvados here.

Pommeau de Normandie is similar to the Pineau des Charentes, except that instead of grapes and Cognac, it is made by blending apple juice and Calvados (apple brandy).

There is also a variation, Pommeau de Bretagne from nearby Brittany, which is made with Lambig. Lambig also is made from apple cider like Calvados, but has a different name since each region in France strenuously protects their appellation of origin.

How to serve Pommeau

Pommeau is usually served chilled in a tulip-shaped glass (sherry glass). It is usually imbibed by itself, or as an accompaniment to foie gras, melon, charcuterie or blue cheese appetizers.

Buy a bottle of Pommeau here.

Lillet is a wine-based aperitif, first produced near Bordeaux in the late 1800s. It is made from 85% wines and 15% fruit liquors and cinchona. Wallis Simpson, the Duchess of Windsor, was said to be a big fan of Lillet.

How to serve Lillet

French people usually drink Lillet chilled or on the rocks. You can also add a bit of lemon or lime zest for an additional citrus aroma.

Another option is to combine it with tonic for a Lillet Tonic, similar to an Aperol Spritz (one part Lillet and top with two parts tonic).

Buy a bottle of Lillet here.

Byrrh (pronounced beer) is a fortified wine apéritif that actually doesn’t taste anything like beer. It was created in the mid-1800s by a pharmacist and his friend, and originally sold as a health tonic in pharmacies.

How to serve Byrrh

Byrrh is usually served cold (not chilled) with a bit of lemon. You can also add a bit of crème de cassis for added flavor.

Buy a bottle of Byrrh here.

Get 27 is a green-colored mint liquor that was invented at the end of the 1700s in the region of Occitanie in France. It used to be 27% alcohol hence the name, while Get 31 used to 31%. This has since been reduced to 21% and 24% respectively.

Pomme Givrée literally translates to “frozen apple” and is somewhat similar to an ice wine (except not as sweet). It is an apéritif from the Haute Alpes region (think skiing), and is famous for being an elegant drink, regularly served at Palais Elysées which is the home of the French President.

How to serve Pomme Givrée

Pomme Givrée is usually served cold by itself, or in the company of a light appetizer like fois gras.

Génépi is another one that can be enjoyed as an aperitif or a digestif. It is a herbal liquor traditionally from the Rhone-Alps and Savoie region of France (around Lyon) in the center of France.

As an apéritif, there are several possible ways to serve a génépi. You can mix it with a dry white wine (1/4 génépi, 3/4 wine, 1 teaspoon of sugar), or use it as an additive directly into a beer.

You could also mix 1 oz of génépi with orange juice and vodka, or alternatively a gin, orange juice, and Schweppes combination.

Buy a bottle of Génépi here.

Vermouths are traditionally an ingredient in martinis, but they can also be served directly as an aperitif. Made from wine fortified with stronger alcohols like brandy, it is then spiced camomile, bitter orange peel, nutmeg, coriander, and cloves.

How to serve Vermouth

Serve it chilled with an ice cube in a tumbler, along with an olive or a slice of orange.

Buy a bottle of Vermouth here.

So are you leaning more towards an elegant Pomme Givrée or a classic Pastis as your favorite french apéritif? Comment below and let me know.