Skip to content
With discounts up to 20-40% in shop!
From Bertillons to a café gourmand, learn about the classic foods in Paris that are much loved by the locals. With starters, mains, desserts, drinks, and more. 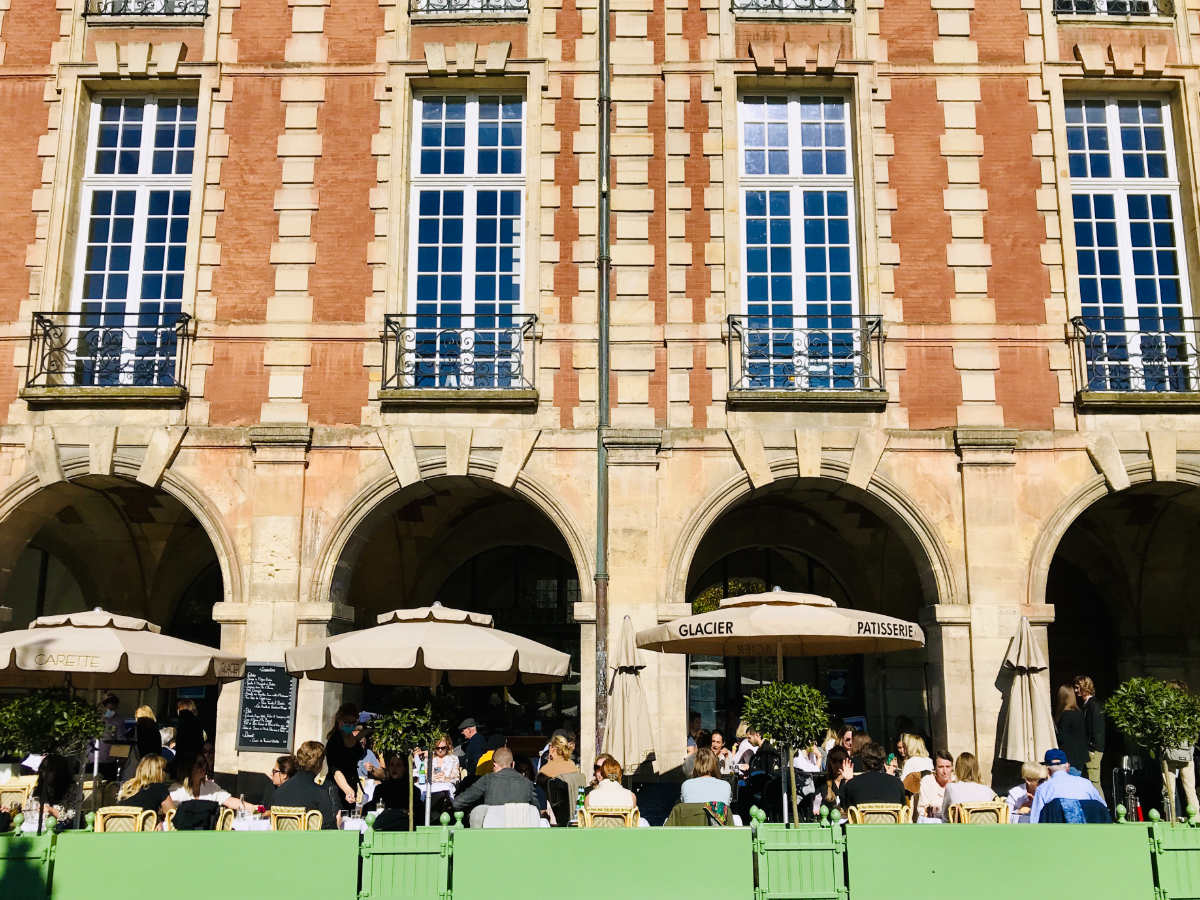 As the capital, Paris is filled with brasseries, restaurants, and shops offering classic and traditional foods from all across France. From Provence to Alsace, Normandy to the Alps, there is a bit of everything on offer.

There are certain delicacies and drinks however, that are particularly prominent in Paris, that every local raves about and every visitor is keen to try. Even tourists who are only in France a short period of time

So as you make your way eating and drinking through Paris (which I highly recommend), keep a look out for these fantastic foods in Paris. Bon appétit!

Ice cream may sound a little boring, but this little family ice cream shop in the heart of Paris, has a passionate following. They have over 90 flavors of ice creams and sorbets, although only 30-40 are on the menu at any one time.

You can go directly to the glacier (ice cream shop) on Ile Saint Louis at 29-31 rue saint louis en l’ile in the 4th arrondissement. Or look out for the small brasseries and restaurants in the nearby Marais who may have a smaller selection of ice creams.

Kir is an apéritif that you will find on every menu around Paris and across France.

There are a few variations of kir on offer, depending on the theme of the restaurant you happen to be at:

Normally a white wine like aligoté from Burgundy, or a crémant from Loire is used as the base for kir. (A crémant is a special sparkling wine.)

Crème de Cassis is a sweet liquor that is made with blackcurrant. You can also use other crème liquors like Crème de Chambord (raspberry) or Crème de Pêche (peach), if you prefer. You can read more about Kir and Kir Royale Chambord here.

Frog legs are a delicacy which have been eaten for centuries. Born out of food shortages and necessity, cuisses de grenouilles (meaning “frog thighs”) have been part of French cuisine for over a 1000 years.

There are two main ways that frog legs are cooked, either deep fried or baked with herbs.

There are variations of these types of dish serving cuisses des grenouilles all over France, from Michelin-starred restaurants in Paris to local brasseries in the countryside. You can read more about eating frog legs in France here.

Legend has it that the croissant was a tradition that the young Marie-Antoinette of Austria brought with her to France, when she married French King Louis XVI. Hence it became known as a viennoiserie or “thing from Vienna (the capital of Austria)”.

Today, croissants and other viennoiseries like pain au chocolat, chausson aux pommes, etc. are an indelibly considered French foods (although, the Austrians might disgree).

While you can find croissants all over the world these days, there is nothing like a french croissant, light and airy fresh out of the oven.

The onions are cooked till they are lightly brown in color so that they are perfectly caramelized. Then they are cooked in a broth and topped with a sumptuous amount of grated cheese.

Each chef has his own combination of cheeses, but the most popular are gruyère, saint nectaire, mimolette, comté, emmental, or cantal. A dish truly fit for a king. You can get the recipe to make French onion soup at home here.

You simply cannot come to Paris and not try the chocolat chaud. Hot chocolate, but not the industrial powdery stuff that you get at a grocery store.

The real chocolat chaud at a chocolaterie like Angelina or Ladurée, will be made from the finest chocolate melted in a pot, with sugar, vanilla, cinammon and just a hint of milk. Each chocolatier will have his own recipe, so don’t hesitate to try a few different types to find your favorite 😉

In France, only wine and water is usually served at dinner (and sometimes lunch), rather than beer, sodas or other drinks. And of course, the wine on the menu at that Parisian restaurant will be French.

French wines are renowned for their quality, and the French wine market is the fifth largest in the world, worth around $30 billion a year.

There are of course many many wine regions in France, but the most popular are:

From red wines, white wines, rosés, sparkling wines, and fortified wines (digestifs), there is a bit of everything. And of course, we can’t forget champagne! You can read more about picking a French wine here.

Tartare is a French culinary term, referring to a number of dishes served raw, rather than cooked. It usually involves raw meat in a steak tartare but you can also see fish chopped or shredded into small pieces.

Almost every brasserie in Paris will have a tartare on offer. It is usually served with a light salad and fries for a light lunch or dinner. You can find recipes for the steak tartare and salmon tartare here.

All across France, in brasseries up and down the country, you will find the blanquette de veau. It is one of the grand classics of French gastronomy, made with veau, meaning veal.

It is a very simple dish, made with meat, vegetables, and a white sauce. Blanquette comes from the French word blanche meaning “white” and refers to the sauce made from cream and butter, or flour.

These days there are plenty of top chefs putting their own spin on it, including using chicken or pork instead, since veal isn’t the easiest to find. You get find a recipe for creamy chicken blanquette here.

Fresh oysters are not usually cooked in France, but served as is, fresh from the ocean. (Fresh oysters are a must-have in France for Christmas.) The hardest part about serving oysters is opening the top shell. But once that is done, just squeeze a bit of lemon on them and serve in a tray.

Be sure to dine at a reputable restaurant, as you do not want to risk food poisoning from bad oysters!

You may think you have had a cheese and charcuterie plate at home, but this is one of those dishes that you really need to try during an apéro in Paris.

Try a variety of jambon cru, terrines, pâtés, and rillettes paired alongside various French cheeses and wines from all over the country. You can read more about composing a French charcuterie and cheese board here. And don’t forget the crudités!

Macarons might be as ubiquitous in North America today as the cookie is in France, but there’s still something to be said to having one freshly prepared at one of Paris’s finest patisseries.

Try ones at Pierre Hermé or Ladurée, but my favorite is Café Pouchkine near Place de la Madeleine. You can read about more French desserts here.

This is the dessert you pick at a Parisian restaurant if you can’t decide which dessert to get. The café gourmand is a small cup of coffee served with 3 small-size desserts.

You don’t get to pick the dessert, that will be the “surprise du chef” as we say in French, but the choices and varieties of cake are usually pretty good.

Note: The coffee that you will be served with a café gourmand is, by default, an espresso. For a larger cup of coffee or decaf, you can explore the possibilities of ordering coffee in France here.

Traditionally from Provence, Pastis de Marseille is the apéritif that has become a favorite all over France, even Paris. However, with an alcohol content of 45% and sharp licorice flavor, pastis is a liquor that most foreigners find is an acquired taste.

It tastes a bit like the greek ouzo, however it is so strong, it must be watered down when served.

You will easily find it on the menu of every French bar, brasserie, and café (and if you don’t you should question their French credentials!). You can read more about the French love of pastis here.

And of course we cannot forget the classic: snails. Rather than being squeamish, if you have ever had escargots, you know that they are actually a delight.

Yes, escargot are the same snails that you might find in a forest, and yes, you will find plenty of restaurants in Paris serving up this delicacy. They are usually cooked in garlic, oil and pesto/pistou sauce, and are served as an appetizer.

The little balls of meat easily go down with some baguette to soak up the buttery sauce. It is estimated that French people eat 16000 tons of escargot every year. You can read more about eating escargot here.

About 30 minutes north of Paris is the town of Chantilly, which is world-famous for three things: the Chateau de Chantilly, chantilly lace, and chantilly cream.

So it would be a shame if you came all the way to Paris and didn’t have a wander through the town and have a waffle with some fresh Chantilly cream! It is a sweetened whipped cream and is recognized as a delight the world over.

If you enjoyed that article, you may want to read more about what a typical French dinner looks like and other classic foods in France.

15 Best French Chefs in the World

8 tips on what to wear in Paris (from French Women)