Skip to content
With discounts up to 20-40% in shop!
With golden beaches and a fortified citadel, Saint-Malo in Brittany, France, will give you plenty of reasons to visit. Get the locals' insights on what to see, where to stay and more.
(As an Amazon affiliate, we may earn commissions for certain purchases. Please note, all information is provided for entertainment purposes only. See our disclosure policy for details.)

If you are looking for reasons to visit Saint-Malo in Brittany, how about golden beaches, a fortified citadel, a pirates’ den, a sailors’ port, and enough legends and stories to fill the history books.

Located on the west coast of France, Saint-Malo has always been most famous for its ocean tides that go out for miles and miles during low tide, and then come right up to the city walls at high tide.

With a rugged coastline and miles of beaches, the people in this part of France have always been drawn to the sea. The town may officially be part of Bretagne (Brittany), but the locals here have always claimed their own way.

Built on a rock at the mouth of the River Rance, the town has been a strategic defensive point since before the Roman Empire. The exquisitely preserved city was believed to have been founded by the Celtic Gauls (as the old French were called). At the time, the Gauls followed pagan traditions and were closely related to the Celts of the British Isles.

☞ READ MORE: The history of the Celts and Halloween in Brittany, France

Eventually, the Celtic settlement was named after their Malo d’Aleth, who came across the English channel from his native Wales in the 6th century. He brought Christianity to the region, building many churches in the area.

The area prospered due to its position on the Atlantic ocean. Many a sailor set sail to the New World from this port, including a certain Malouin by the name of Jacques Cartier. Canadians will remember Jacques Cartier as the other guy who “discovered” North America, landing in what is now Newfoundland, Canada in 1534. (You can read more about famous French explorers here.)

The town also became notorious for its French corsairs (aka pirates). It was the era of the high seas, and merchant ships from neighboring England, Spain, and the Netherlands were fair game in this war of attrition. The town became wealthy as its pirates and sailors brought back wealth from their travels.

During WWII the city remained a strategic base, with additional fortifications added around Saint Malo by the Germans. A good portion of the city was destroyed during its liberation in 1944, as Allied soldiers advanced inland, as the city is located about 120 miles (200 km) from Omaha Beach.

With massive reconstruction projects after the war, the city remains one of the jewels of this part of Brittany, with plenty of things to do and see.

When you arrive at Saint Malo, you will notice a very impressive set of fortress walls welcoming you into the historical city. The surrounding high wall forms a complete trapezoid-shaped loop that is 2 km (1.2 miles) long.

The original wall dates back to the 12th century, but it was upgraded several times, with massive upgrades during the 17th century under the great military architect Vauban (who also built the walls around Briançon), under the reign of Sun King Louis XIV (of Versailles fame) to protect the port of St Malo.

There are several towers and gates all around the ramparts and you can walk all the way around. For the best view of the bay and the city, head to the top of Bidouane tower. You can also visit the Musée d’Histoire to learn more about the history of the city.

Saint-Malo is one of those places that you should never visit as a day trip, because you will miss seeing the tidal swings. During low tide, there are miles of golden beaches surrounding the city walls, a delight for sunbathers and swimmers all around. The sandy bay is full of crabs, shrimps, mussels, and other shellfish that the tidal waves have left behind.

And then a few hours later, during high tide, the water comes in so hard and fast, that waves go over the city walls. The high-tide waves (“grandes marrées“) are so impressive, that they are tracked and given a co-efficient of strength to give locals and tourists an idea of how high the waves will be, and when they need to take cover.

The difference in water height between low tide and high tide is on average around 13 meters (!) and is the highest in Europe.

Just outside the city walls, you will notice there are several tiny islands with small fort installations. These fortified islands are only accessible during low tide.

Grand Bé is the largest tidal island, and is easily accessible from Bon Secours beach. With an ancient fort located on it, the island also has the tomb of François-René, Vicomte de Chateaubriand, a famous French writer who wished to be buried there, with his tomb facing the ocean. It has a very rocky landscape, so wear your walking shoes. Watch out for the tide though, because if you are trapped there, you have to wait 6-8 hours for the tide to come back down.

There are 4 other forts that were built more recently in the late 17th century by Vauban and his understudies. Out of the 4 forts, only Fort National and Petit Bé are accessible to tourists for a small price. Each has excellent views and offers different perspectives of the citadel, and are also only accessible during low tide. Fort National was in use as late as 1944 during WWII, when German soldiers used the forts as prisons for hundreds of French people and Malouins in the fort. Both forts were heavily damaged during WWII during the heavy fighting, and have been largely restored today.

The other two, La Conchée and Fort Harbour are under private ownership and under restoration, and so are not usually open to visitors.

You can’t come all the way to Saint Malo and not visit the world-renowned Mont Saint Michel which is a mere hour away by car. This religious monastery may be one of the most beautiful heritage sites in France.

In the 10th century, the Benedictine Monks settled here and the site had become a destination for pilgrims from across Europe, which it remains to this day.

If you intend to visit the Mont Saint Michel Abbey, I would recommend keeping Saint-Malo as your base, and doing a day trip to Abbey. You can read more about visiting Mont Saint Michel and get information about taking a tour here.

As you are walking along the ramparts, look for the large statue of Jacques Cartier. You can also visit Musée Jacques Cartier which is located in a large house that he owned, around 9km (5miles) outside of Saint-Malo. It has been restored to represent what it looked like in his day and contains many personal artifacts. Learn about his life, relationship with his wife, travels to North America, and more.

And if you can’t get enough Jacques Cartier, within the city walls, you will find the Maison du Québec. The building and exposition were offered by the Government of Quebec to the City of Saint-Malo in 1984 as a symbol of friendship and in tribute to Jacques Cartier.

Most of the fortified town is pedestrianized, so enjoy stepping back in time in the narrow streets of this historic city. Many of the buildings intra-muros (within the walls) are considered historic monuments themselves, with their timbered exterior.

Certain streets near the Maison du Québec are decorated with the Quebecois flag, vaunting their connection to what used to be called “New France”.

While walking around town, keep a lookout for the interestingly named Rue Chat qui Danse (“Cat who danses”).

As the story goes, an English ship tried to attack the city in 1693. The English had filled a ship with explosives to destroy the ramparts of Saint-Malo.

But the boat ran aground before reaching the city (they were probably unaware of the low tides). Anyway, the boat exploded, leading to the demise of only one poor little cat.  And hence the name “Cat who danses”, for a private giggle at the expense of the English. You can read more funny French expressions about the British here.

Brittany and nearby Normandy are famous for their cheeses, so don’t forget to visit a fromagerie (cheese shop) to pick up a few samples like Pont-l’Eveque and Nêufchatel.

This is a port city, so there are plenty of pleasure cruises that will take you out on the Atlantic. Everything from speed boats to sailboats to replica pirate ships are on offer, to take you out to sea.

You can even have a wedding ceremony on a boat if you wish! (French marriages legally must be at the Mairie, but most French people have a 2nd ceremony in places like a church, garden, boat, etc.)

Just outside the city walls is Casino Barrière, which is over 2 levels of slot machines, poker tables, blackjack, and more. The casino is one of the largest in the area attracts tourist from around France and beyond.

If you are looking for something a bit for child-friendly than a casino, visit the Great aquarium which houses 11,000 marine animals and covers 4,000 square metres (43,000 sqft).

With a shark tank, sea turtles, touch pool, and even a mini submarine ride, there is something to enthral everyone in the family.

This area of Brittany is famous for its buckwheat crêpes, you can’t come all this way and not any. You can get savory versions, with ham, cheese and other toppings (try the smoked salmon), followed by a sweet crêpe, like caramel and ice cream.

Top it off with a jug of Breton cider, for a perfect meal. You can read more about foods to eat and drink in Brittany here.

☞ READ MORE: Crêpe Suzette: To Flambée or not to Flambée?

How to get to Saint-Malo?

By Train: Saint-Malo is quite easy to get to by train, as it has a large train station. From Paris, it takes around 2.5 hours to get to Saint-Malo by train.

By Car: If you are coming by car, it takes around 4 hours from Paris, and 8 hours from London.

By Plane: The closest airport is in Rennes, around 70km (44 miles) away, from where you can either take a train or drive over.

With Guided Tour: If all these options seem complicated, take a guided tour of Brittany from Paris, which covers Saint-Malo, Mont Saint Michel, Honfleur and more.

I would recommend spending at least 2 nights in Saint-Malo, because the massive ocean tides coming in and out are a sight to behold.

There are several accommodation options in Saint-Malo both inside the city walls and on its outskirts.

So have you been convinced to put Saint Malo on your France Bucket List? Comment below and let me know! 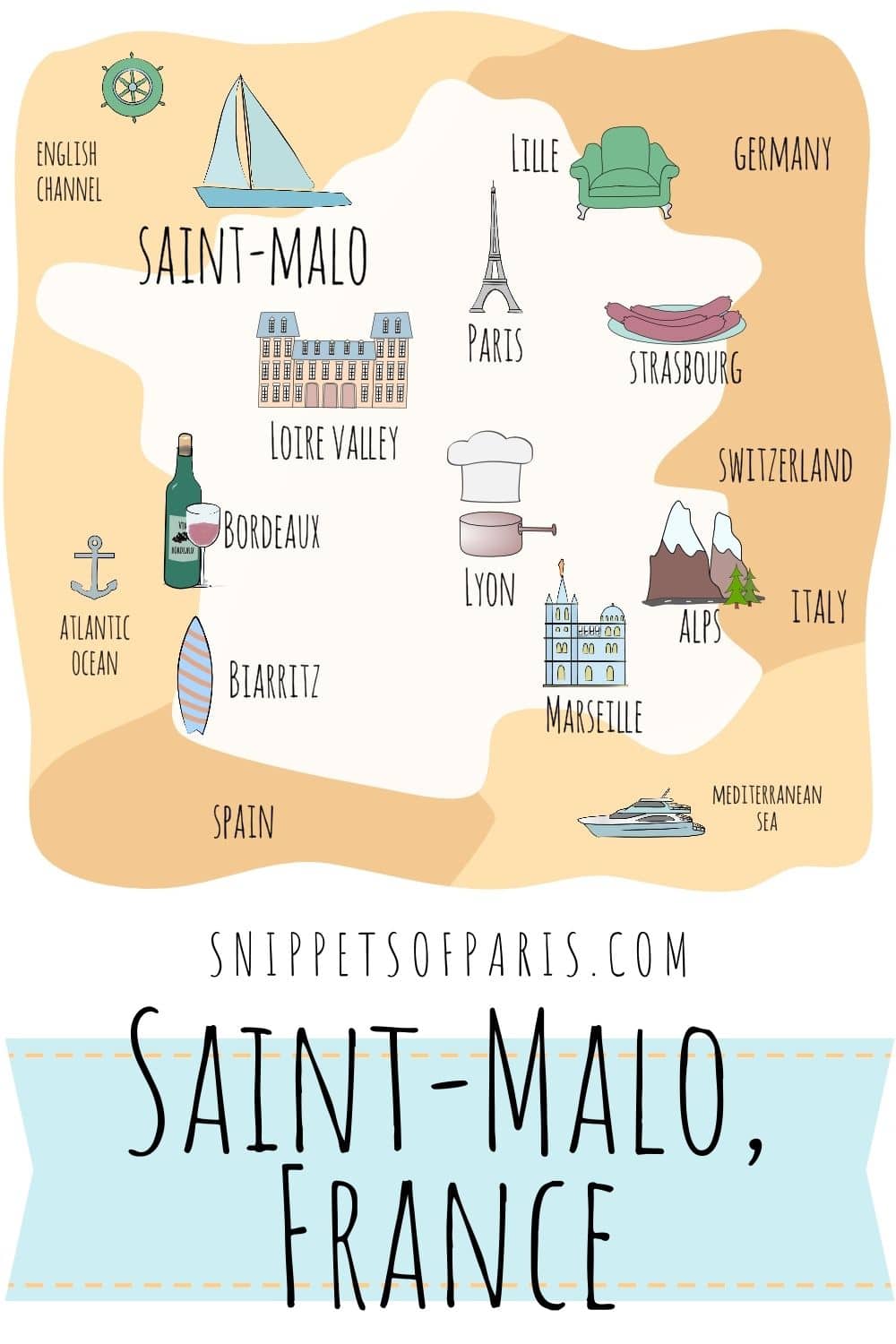 Trouville-Sur-Mer: the Other Seaside town in Normandy