Skip to content
With discounts up to 20-40% in shop!
Learn interesting facts about William the Conqueror, from his birth in Normandy, the Battle of Hastings, the English throne, and impact on France and the UK. 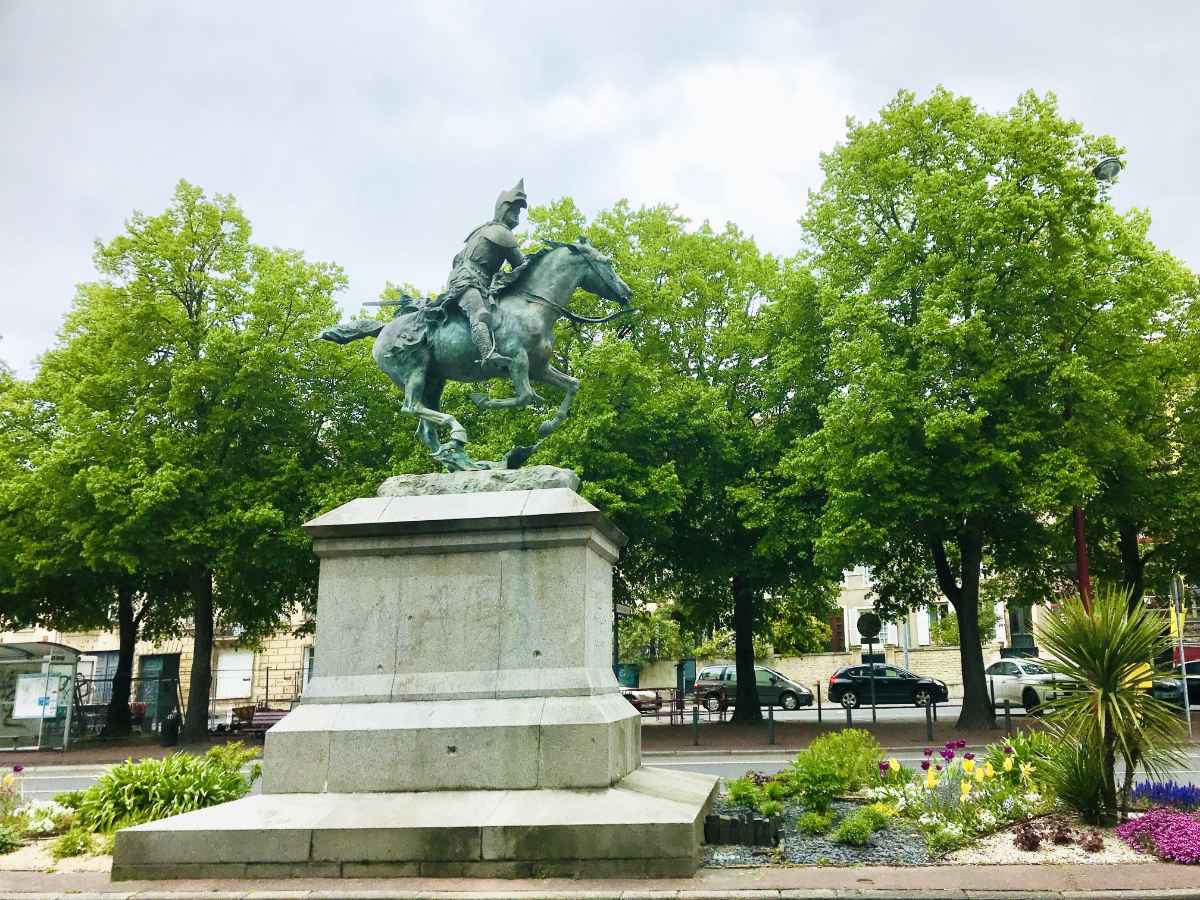 William the Conqueror's statue in Caen, France
(As an Amazon affiliate, we may earn commissions for certain purchases. Please note, all information is provided for entertainment purposes only. See our disclosure policy for details.)

William the Conqueror may be best known for the 1066 Battle of Hastings in England and establishing a lasting monarchy there, but the English King’s heart was actually back in France.

It is in Normandy in France where William was born, where he left his loving wife, and indeed where he died. And he probably wouldn’t have recognized the name “William”, as the Norman warrior spoke French and was actually named “Guillaume“.

For French people, it is Guillaume le Conquérant who conquered England and whose descendants to continue rule through the House of Windsor. So let’s get to a few facts about William the Conqueror, aka Guillaume, and his life in France and his impact on England, shall we? Allons-y!

1. He is descended from Vikings

In early days, when the Gauls and the Franks dominated French history, Viking raids from the North were common, along the French coastline

One of William’s ancestors, Rollo of the Vikings became the 1st ruler of Normandy. Rollo was William’s great-great-great grandfather, establishing the House of Normandy and the Duchy of Normandy that William descended from

Such was the importance of Rollo, that his body was buried in Rouen in a cathedral consecrated in 1063 in the presence of William, three years before he went off to England.

2. He was the bastard son of Duke

William was never meant to be a Duke. His father Robert was the younger son in the House of Normandy, and was not meant to be Duke either.

In addition, William was born a bastard, as his mother Herleva was a low-born daughter of a tanner and did not marry William’s father.

In due course however, William’s father Robert would become Duke when his older brother died (or was poisoned). And William would inherit his duchy as he was the only son, bastard or not.

William would have to work hard to establish his legitimacy and consolidate power, with the support of the French kings at the time, to whom he owed fealty.

3. He married his cousin

One of the ways to consolidate power at the time was through marriage. William wanted to marry the daughter of the Count of Flanders, who was his third-cousin once removed.

Flanders was of great strategic importance to England as a foothold into the continent, and the lands were near the Duchy of Normandy.

Legend has it that Mathilde of Flanders was not initially swept away by William’s marriage proposal and refused. As the tale goes, apparently he laid in waiting for her on her way to church, and pulled her off her horse by her long hair.

As a mating ritual this may seem rather strange, but Mathilde changed her mind and refused to marry anyone else except William. Even the Pope in Rome got involved, invoking a ban on the marriage on the grounds that they were too closely related to each other.

William and Mathilde prevailed however, with the happy couple getting married in 1051.

As repentance from the Catholic Church, William had ordered the construction of the two abbeys in Caen in Normandy, the Abbaye aux Hommes (for Men) and Abbaye aux Dames (for Women).

Theirs was a happy marriage, producing 9 children. As historians’ recount, William the Conqueror did not have any illegitimate children outside of his marriage.

This is evidentially used as proof of this given the amount of time he and his wife were separated while he was off conquering and stabilizing different parts of his fiefdoms.

5. He took a large army from Normandy into the Battle of Hastings

While Guillaume (aka William) and Mathilde were busy having kids, over in England, King Edward the Confessor was looking for a successor. He remained childless, and seeming chose William as the grandson of Edward’s maternal uncle, Richard II of Normandy.

However, when actually on his deathbed, King Edward changed his mind and instead named Harold (who was actually present), rather than William who was still in Normandy.

The stage was set for the Battle of Hastings. William and his army head off across the English Channel in 1066 fight King Harold, who has already been crowned in Edward’s new Westminster Abbey in London.

And hence was born the legend of Guillaume le Conquerant, anglicised into William the Conqueror.

William shaped much of England and the Anglo-saxon world. He didn’t speak much English, so the language of the (English) court became French, a tradition that his descendants continued for centuries. As such, approximately 45% of words in English are rooted in French.

7. He created the Domesday book

Once William became King of England, he set about establishing a system of government, laws, and taxation to be integrated into the Anglo-saxon territory.

Along with many aspects of Norman law, he created the Domesday Book which was in effect a land survey noting who owned what and what taxes they owed on that property. This way he could reward his followers by redistributing lands, quell unrest, and assign a value to each asset.

8. His wife managed the Duchy of Normandy

After the conquest, William didn’t just stay in England. His wife and many of his younger children remained in France, while William was busy fighting off English nobles who wanted his throne.

Mathilde was an intelligent woman, who managed much of the affairs of the Duchy of Normandy when William was away and also taking matters into her own hands, when in London.

William went back and forth across the English Channel (La Manche in French) several times throughout the rest of his years. .

Caen was not the capital of the Duchy of Normandy when William became Duke. However, it is located 9 miles (15 km) inland from the English Channel, making it a good base for him and his family to go back and forth from his Duchy to his new kingdom.

He built the enormous Château de Caen in the city, putting the city on the map and making it the capital. Interestingly, the Château is built from Caen stone, which is the same stone that he used to build the Tower of London in England.

9. His half-brother commissioned the Bayeux tapistry for him

William’s mother may have been from common stock, but that didn’t mean William was prepared to cast his maternal family aside once he was Duke of Normandy and King of England.

He elevated his half-brother Odo to the position of Earl of Kent in England and the Bishop of Bayeux in France. It was Odo who would commission the Bayeux Tapestry, to tell the story of William the Conqueror’s invasion of England.

It is an exquisitely stitched medieval tapestry made of a large embroidered cloth nearly 70 metres long and 50 centimetres high. It depicts the events leading up to the Norman conquest of England, culminating in the Battle of Hastings and the death of King Harold II of England in 1066.

10. He was very sad when his wife died

Matilda and William had a relatively happy family life together. She was deeply invested in her children’s well-being, with all her children known for being remarkably educated. This included her daughters, at a time when education of noblewomen was not considered necessary.

Matilda died 4 years before William, in 1083. Upon hearing of her death, he swore to give up his favorite sport of hunting to express his grief.

11. He died in battle in France

William died in 1086, after leading an expedition near Mantes-la-Jolie (today a suburb of Paris). He fell ill while in the saddle, and is thought to have fallen off and died.

William was a rather large man with gout trouble, and his stomach is said to have exploded during the funeral, leading to an awful stench.

12. He is buried in Caen in France

He was brought back to Caen and buried in the Abbaye aux Hommes (Abbaye to Men) that he constructed.

13. His will didn’t work out as he planned

William left Normandy to Robert the oldest son, demonstrating what he considered to be the bigger prize. The custody of England was given to William’s second surviving son, also called William, on the assumption that he would become king. The youngest son, Henry, received money.

However, Henry would get his revenge. After William (the son) died in a hunting accident, Henry seized the English throne becoming King Henry I of England. He then went to war with his older brother Robert, and seized Normandy as well.

14. His granddaughter married a Plantagenet

It was William’s son, Henry I who married his daughter to Geoffrey, Count of Anjou in France. The name “Plantagenet” was taken from Geoffrey’s epithet. Mathilda and Stephen of Blois (another grandson of William) would duke it out for the English throne.

Matilda’s son going on to become Henry II of England and the 1st Plantagenet King. (Henry II married Eleanor of Aquitaine, another Frenchwoman, making the English throne quite French!)

15. His descendants sit on the thrones of Europe

Many of William’s descendants continued to speak French rather than English, with the motto of the English monarch becoming:

From the Plantagenets, Tudors, and Stuarts, on down, William’s descendants would go to intermarry for several generations with the French royal house. This would lead to many wars and conflicts as they each tried to assert their rights to the other’s throne.

If that wasn’t enough, his direct descendent British Queen Victoria married off her nine children into each of the Royal houses of Europe, adding to William’s progeniture propagating across the continent.

The end result is that each of the royal houses of Europe has some connection to William, including the current House of Windsor.

If you enjoyed that article, you can read more fun quotes about the age-old rivalry between the British and French here.

34 Amazing Facts about the Louvre Museum

8 Strange Differences to know before buying a House in France

How to play Pétanque (with Printable Rules)