Skip to content
With discounts up to 20-40% in shop!
Visit Caen, the capital of Normandy on the west coast of France. From William the Conqueror to WWII, we cover top things to see in the area, where to stay, and more. 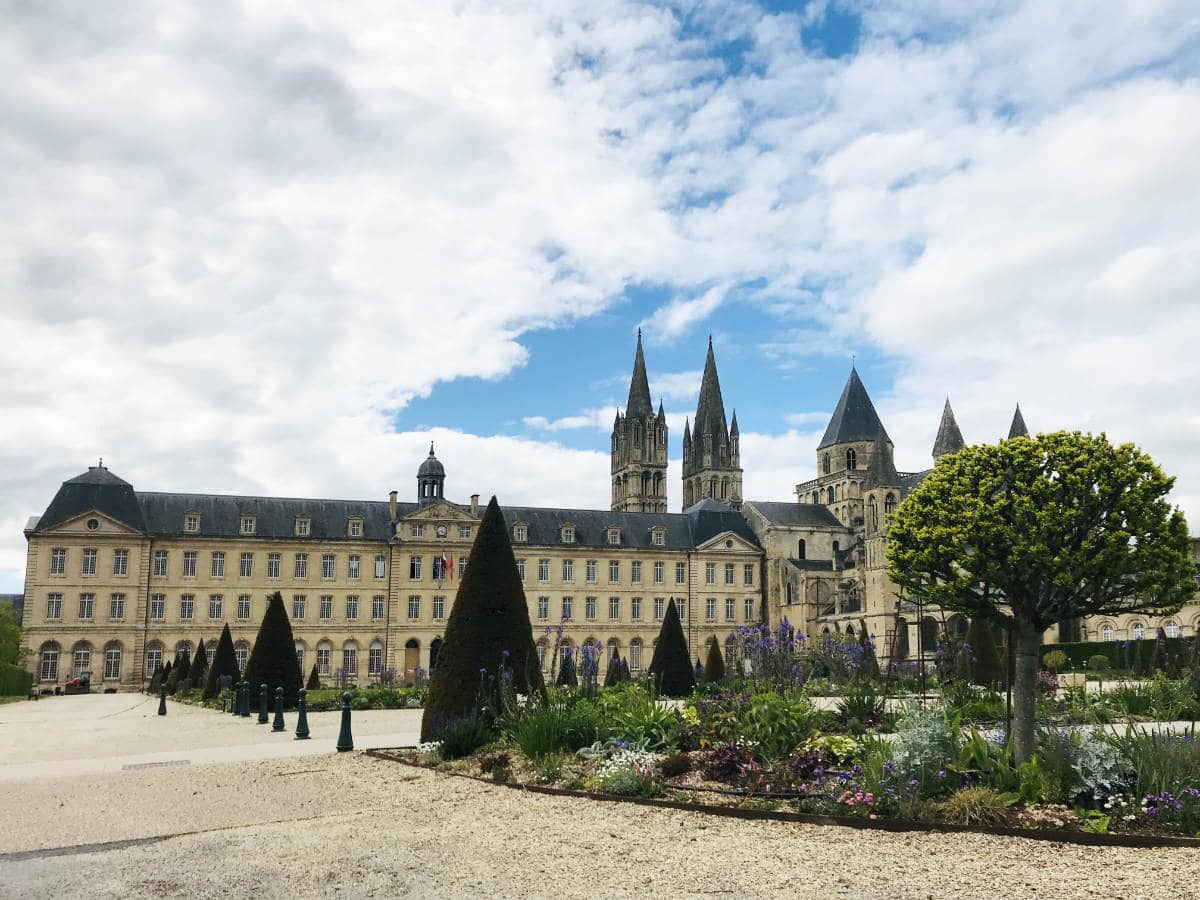 Abbey aux Hommes in Caen
(As an Amazon affiliate, we may earn commissions for certain purchases. Please note, all information is provided for entertainment purposes only. See our disclosure policy for details.)

A visit to Caen in Normandy is a visit back in time, into the history books of both France and England. Two remarkable events were born in Caen, shaping the history of first countries.

It is in Caen that William the Conqueror is buried in the Abbaye aux Hommes, in the heart of his duchy. He may have conquered England in 1066, leaving his descendants to continue rule that country through the House of Windsor, but his heart was in France.

All over the city of Caen, you can see vestiges of his time here. From the towering Château de Caen that he built, as well the two grand Abbayes, one for men and one for women.

However, much of Caen that you see today has been reconstructed. During World War II, Caen’s close proximity to the west coast of France and the English Channel meant that is was on the front lines of any attempt by British and Allied forces to regain a foothold in continental Europe.

After D-Dday on June 6th 1944, Allied forces made their way to Caen where an entrenched German army was waiting. The Battle of Caen would last two months and destroy much of the city. While nearby Norman cities like Bayeux, Honfleur, and Deauville were mostly spared, Caen got the brunt of it.

It is this history that is featured on display when visiting the sights and attractions of Caen, the capital of Normandy. With plenty of things to do, let’s get to it shall we? Allons-y!

Caen was not the capital of the Duchy of Normandy when William the Conqueror (aka Guillaume le Conquérant in French) inherited it. It was he who put the town on the map by building the enormous Château de Caen.

It is located 9 miles (15 km) inland from the English Channel, making it a good base for him and his family to go back and forth from his Duchy to his new kingdom.

Interestingly, the Château is built from Caen stone, which is the same stone that he used to build the Tower of London in England.

Today, the castle serves as a museum that houses:

William was on a trip back home to quell unrest in Normandy when he was killed. He had already begun construction on the grand Abbaye aux Hommes and the Abbaye aux Dammes by that point.

William had ordered the construction of the two abbeys as a way to ask for repentance from the Catholic church for having married his closely related cousin, Mathilde of Flanders.

William died in 1086, after leading an expedition near Mantes-la-Jolie (today a suburb of Paris). He was brought back to Caen and buried in the Abbaye aux Hommes (Abbaye to Men) that he constructed.

William shaped much of England and the Anglo-saxon world. He didn’t speak much English, so the language of the (English) court became French, a tradition that his descendants continued for centuries. As such, approximately 45% of words in English are rooted in French.

Many of William’s descendants continued to speak French rather than English, with the motto of the English monarch becoming:

William’s descendants would go to intermarry for several generations with the French royal house, leading to many wars and conflicts as they each tried to assert their rights to the other’s throne. (You can read more fun quotes about the age-old rivalry between the British and French here.)

Moving to history that is much more recent, the Caen Memorial Museum looks at World War II and the D-Day invasion from a large perspective,including the impact on Caen and this part of Normandy.

The museum covers the years after World War I, when the rise of dark forces began across the continent. Known as the “phoney war”, the rise in strength of the Germany Reich readying itself for war give way to images of a tired France still recovering from the previous war. The French were hoping against hope behind the Maginot Line to protect them.

It then moves on to the start of the WWII when after a short battle, France fell under occupation. Covering the daily life for French people, it includes stories of those who collaborated with the occupying forces, and those who in the French resistance.

A 2nd section in the museum covers the D-Day landings and the battles aftermath, up until the liberation of Caen, and later Paris. Once the Allied forces landed and started pushing their way inland, the Battle of Caen began.

Caen is about 9 mi (14 km) inland from the coast, at the junction of several roads and railways. The communication links made it an important objective for both sides. For two months, the city was under fire, with locals caught in the middle.

Before the invasion, Caen had a population of 60,000 people. On 6 June, Allied aircraft dropped leaflets urging the population to leave but only a few hundred were able to.

Allied bombings started later that same day to slow the flow of German reinforcements. Streets were soon blocked by rubble and homes were destroyed. In short order, the city’s Palais des Ducs, the church of Saint-Étienne and the railway station were all destroyed or severely damaged.

About 15,000 people took refuge for more than a month in medieval quarry tunnels south of the city, and another 3000 in the Abbaye aux Hommes. By the end of the battle, the population of Caen was reduced to a third (around 15,000), and most of the city was destroyed.

The Caen Memorial Museum takes you through individual stories and the overall impact of the D-day landings on the war effort.

Theirs was a happy marriage, producing 9 children. As historians’ recount, William the Conqueror did not have any illegitimate children outside of his marriage, which is evidentially is proof of this given the amount of time he and his wife were separated while he was off conquering and stabilizing different parts of his fiefdoms.

Mathilde was an intelligent woman, who managed much of the affairs of the Duchy of Normandy when William was away, and also taking matters into her own hands, when in London.

In addition, Matilda was deeply invested in her children’s well-being, with all her children known for being remarkably educated. This included her daughters, at a time when education of noblewomen was not considered necessary.

She died 4 years before William in 1083, and he swore to give up his favorite sport of hunting to express his grief after the death of his wife.

Just next to the Château de Caen is Vaugueux District, a charming pedestrianized area with plenty of shops and restaurants. It is one of the few remaining parts of Caen that resemble the city as it was prior to D-Day 1944.

Which is not to say that it was not bombed. This area too was heavily bombarded by the Allies for 5 days during the Battle of Caen, destroying much of what was there.

But such was its importance to the morale of a devastated town, the area was reconstructed and widened to open up the space. Today, it is a lovely place to have a meal or enjoy a drink with the locals.

A trip to Normandy on the west cost of France would not be complete without visiting the D-Day beaches and paying your respects to soldiers who fought so bravely and have fallen here.

There are 5 main beaches where the D-Day assault started on June 6th 1944. From east to west, on the coast of France along the English channel, these were:

If you are American though, you will want to head to Omaha Beach which is 31 miles (51km). It is this beach that arguably had the landing that was the most difficult of the 5 Normandy landings on that fateful, with the most loss of life.

You will need a car to get to the beaches from Caen, as the public transportation in this area is not very often or convenient. There are many memorials and cemeteries in the area, and it is well worth the visit. You can read more about visiting the D-Day beaches here.

One of the delicacies to try in this area in the Pommeau de Normandie. It is a fortified wine and apéritif that is made by blending apple juice and Calvados (apple brandy).

Pommeau has an alcohol content of 16-18% and comes in a range of flavors, with white being drier, and rosé or red being more fruity.

There is also a variation, Pommeau de Bretagne from nearby Brittany, which has a different name since each region in France strenuously protects their appellation of origin.

Pommeau is usually served chilled in a tulip-shaped glass (sherry glass). It is usually imbibed by itself, or as an accompaniment to foie gras, melon, charcuterie or blue cheese appetizers. You can read more about the foods and drinks in Normandy here.

How to get to Caen?

Caen is easily accessible by SNCF TER train, taking around 2 hours from Paris, which has the closest international airport. (There is a small airport in Caen, but it does not have many direct flights.)
It takes the same amount of time to get to Caen from Paris by car.
There are also day-trip tours from Paris that will take you to the D-Day beaches and stop at the Caen Memorial on the way back.

One day is enough in Caen, however you may want to spend the night if you want to visit the D-Day beaches, Deauville, Honfleur, Saint Malo and Mont Saint Michel which are all within a 2 hour drive.