Skip to content
With discounts up to 20-40% in shop!
Travel to Omaha beach in Normandy and visit the memorials and cemeteries of the American soldiers of WWII. We look at what to see, how to get there, and more. 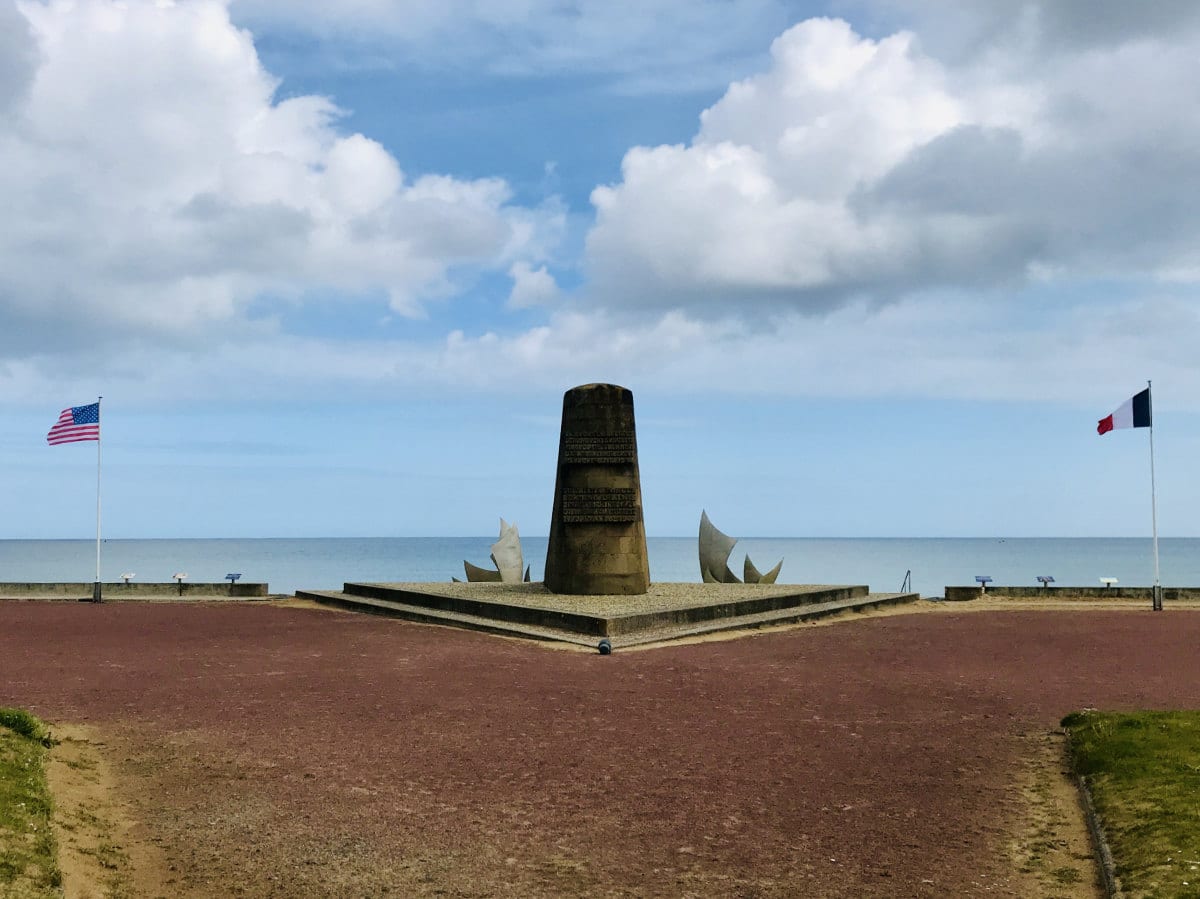 If you are American, you have likely heard of Omaha beach. It is a place that has become synonymous with the heroic sacrifices made by the Allied forces during the D-Day landings in June 1944.

In the chaos of war no precise figures were available, but it is estimated that between 2,000 – 5,000 soldiers were killed, wounded, or were deemed missing along this stretch of Normandy coastline. It is here that the push began to liberate France from the German Reich, a push that would continue till May 8, 1945 when victory in Europe was declared.

There are numerous memorials in May in and around cemeteries around Omaha Beach that were erected by the American and French governments to honor their sacrifices. Of the 5 main D-Day beaches that were involved in the Allied invasion, it is at Omaha that the worst casualties are believed to have occurred.

The beach names (Omaha, Sword, etc.) were simply code names that the Allies came up with, but today those beaches officially go by those names. When you arrive at Omaha Beach, you see it is called Omaha Beach. And if you speak French, it is not called Plage de Omaha for instance (plage being the French word for “beach”).

Omaha Beach actually spans across 3 different communes (towns) between Vierville and Colleville-sur-Mer. So if you are driving and wondering what to enter into the GPS, just enter “Omaha Beach”.

It is a quietly beautiful place, with many monuments along the shoreline.

The primary objective at Omaha Beach was to secure a beachhead 5 miles (8 km) long, linking with the British landings at Gold Beach to the east, and to link up with American troops landing at Utah Beach.

Initially, the Americans were to land only on Omaha beach, but Utah beach was added to the invasion plans at the eleventh hour so that the Allies would be near the French port city of Cherbourg.

Many historians agree that of the 5 landings, Omaha was one of the most difficult of landings. The beach had a large number of German troops and Allied bombings had failed to take out the German strongholds.

The beach was riddled with mines, traps, and other artillery. The movie “Saving Private Ryan” depicts this landing and the subsequent battles.

As a comparison, U.S. troops on Utah beach landed 1 mile (2km) south of the planned location, which would have been more dangerous, due to the tides. Over there, the German resistance had already been weakened, and the Americans at Utah suffered comparatively minor losses, with some 50 dead and around 150 wounded.

The Memorials at Omaha Beach

The beach has cliffs on either side, so you can imagine the carnage upon landing, with the area bristling with field guns, mortars and machine guns. There is a large parking nearby, so that you can park your car easily and approach the waters.

It is actually a beautiful stretch of sandy beach, so while it may seem incongruous, this is the local beach for the townspeople living nearby and visiting vacationers.

At the west end of the beach in sector Charlie, you can climb up the nearby cliffs to see the German bunkers.

Right in front of the German bunkers is the replica pier taking you out to see a portion of the combat artillery that was left in the water as a monument.

One thing to keep in mind is that the armaments are only visible at low tide, so check the tidal forecast before you head out.

A few minutes walk inland from Sector Charlie are the remains of the Passerelle Mulberry (Mulberry harbour) which was used on Dday where that replica pier now stands.

This is the type of artificial bridge that was used on that fateful day by Allied troops in their landing under heavy fire. It was especially constructed as part of Operation Overlord to land on the beaches of Normandy to create an artificial port.

The original Mulberry bridge was brought down just days after the landing on June 19th, 1944 due to heavy damage sustained in the attack.

The poem placed on the beach in front of the memorial reads:

There is a small crêperie and public toilets in this area, if you require any facilities.

On the other side from Charlie sector, just above Omaha beach, lies the American Cemetery which serves as the final resting place for over 9,000 U.S. soldiers.

Although you can see the beach from the cemetery, there is no direct access from the beach.

The cemetery lies in the commune of Colleville-sur-mer, and you have to drive around 10 minutes from the beach to the cemetery parking lot to enter.

While there are several WWII cemeteries in this part of France (including German cemeteries), this cemetery is dedicated to those Americans who perished during the D-Day landings and fighting that occurred in its aftermath.

The cemetery site covers 172.5 acres, with an orientation table depicting the landings in Normandy and a reflecting pool that is meant to educate as well as mourn.

A little futher on is a huge semicircular colonnade with walls at each end containing large maps and showing the flow of the military operations. At the center is the bronze statue, “Spirit of American Youth Rising from the Waves.”

There are graves with crosses, stars of David, crescents buried next to each other, soldiers-at-arms just as they were in life. There is a Wall of the Missing with the names of over 1,500 soldiers missing in action.

At the far end of the cemetery is the chapel, along with two statues representing America and Europe standing together.

Two children of President Theodore Roosevelt, his sons Theodore Jr. and Quentin rest among more than 9,000 other graves. Theodore Jr. was the eldest son of President Roosevelt and received the Medal of Honor for his role in the directing of troops at Utah Beach during the Normandy landings. He would die of a heart attack in France one month later at the age of 56.

After the creation of the American cemetery, his youngest brother Quentin who was killed at the age of 20 in aerial combat during WWI, was exhumed and reburied here next to his brother.

In recognition of their losses, the land has been donated by the French government to the United States.

There are two museums dedicated to the American war effort within 10 minutes of Omaha Beach.

Right off of the beach is the Omaha Beach Museum which is around 1400m² and showcases a collection of uniforms, vehicles, personal objects, weapons. It takes around an hour, with life-size models recreating what it was like for those soldiers at war.

A bit further away, but larger in scale is the Overlord museum. This is a private collection that today partners with many WWII associations in the U.S. and the local tourist boards in the area. Personal items from soldiers and armoured fighting vehicles from the forces in Normandy are presented in a series of reconstructions, with stories of individuals and their bravery.

About 10 miles (15 km) inland from Omaha beach is the La Cambe German Cemetery. La Cambe was originally the site of a battlefield cemetery that was started on D-Day as the battle progressed.

Initially German and American soldiers were buried in neighboring fields here. After the war, many of the American graves were repatriated to the United States or transferred to the American cemetary at Colleville-sur-mer, depending on the preferences of family members.

On the German side, there were several grave sites spread out across Normandy. Between 1954 and 1966, the grave sites were consolidated to 6 main sites. La Cambe is now the largest German war cemetery in Normandy and contains the remains of over 21,200 soldiers. Their names engraved on dark stones laid flat on the ground.

About 1 mile (2 km) away from Omaha beach is the Maison de la Liberation, meaning “house of liberation”. Here you can visit the very first house that was liberated by American troops who landed on Omaha Beach.

Panels around the house note its history. On the morning of June 6th, a squad of US soldiers advanced to this tiny village of about 900 people, Upon entering the property, they found a French family taking cover in their residence.

Guided tours in the area are often available by appointment only, as the house is still private property. It is sometimes rented out as a gite (cottage rental).

How to get to Omaha Beach?

The easiest way to get to the Omaha Beach is by car. Public transportation to the beaches, museums, and cemeteries is not very convenient or advisable.
If you do not wish to drive, I highly recommend taking a tour. There are tours leaving from Paris, which will take you to the main sights and bring you back in comfort.

About a day should be enough to visit Omaha Beach, the American cemetery nearby and even one of the museums, leaving enough time to then head back to your accommodation.

The town of Caen, Bayeux and Deauville are nearby, and make a good base for your visit.