Skip to content
With discounts up to 20-40% in shop!
Visit Honfleur, a beautifully preserved old fishing port city in Normandy on the west coast of France. We cover things to see, where to stay, what to eat and more. 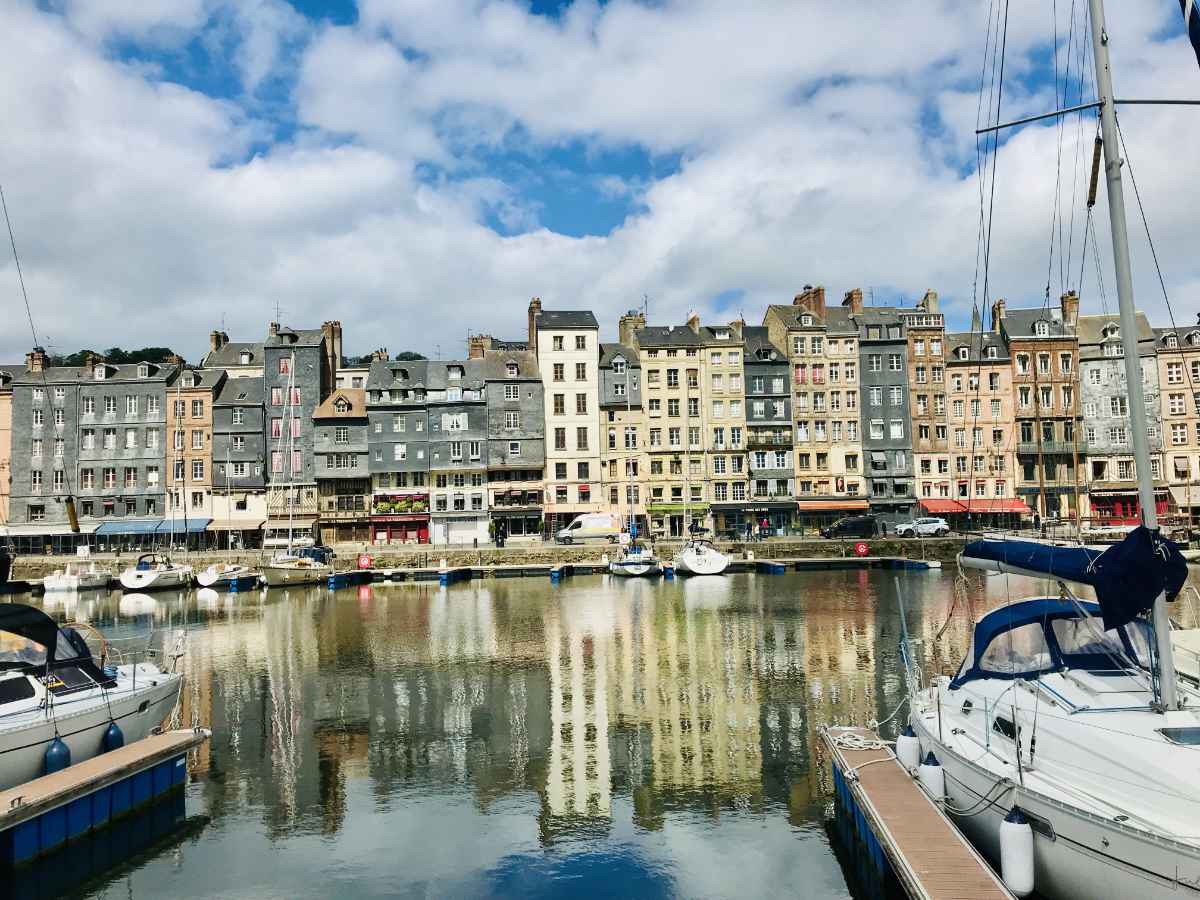 If you’ve never been to Honfleur, take the time to visit. Honfleur is a charming town on the Normandy coast in northern France and a wonderful place to visit.

A commune in the Calvados department, Honfleur is located on the left bank of the Seine across from city of Le Havre. Unlike Le Havre and the Norman capital Caen, Honfleur is one of the few towns in Normandy not damaged during D-Day and 1944 Battle of Normandy. Indeed, Honfleur was liberated by British and Canadian troops without seeing combat.

Samuel de Champlain, one of the most famous explorers associated with the port, headed off from Honfleur to found the Canadian city of Quebec in the 16th century.

These days the town is primarily a tourist destination but also has a rich maritime and artistic history. Every year in October there’s a big shrimp festival, the Fête de la Crevette, where shrimp delicacies take over the town for a whole weekend.

The historic old town of Honfleur is a UNESCO World Heritage site, it’s beautiful, and it’s a great place for a short trip from Paris to see the Normandy coastline. So let’s see what there is to do in Honfleur, shall we? Allons-y!

The heart of Honfleur is its Vieux Bassin harbor. It is a man-made harbour lined with wooden pontoons and a short walk from the historic centre of Honfleur.

It’s the most beautiful place in Honfleur and a great way to get a feel for the town. It is lined with shops and restaurants, and there is always a buzz about the place.

Locals gather to meet, eat, and chit chat amongst themselves. There are no longer any commercial ships or fishing boats in the Vieux Bassin, those have been moved to the larger docks at Le Havre. You will however, find plenty of sailing boats, pleasure boats and yachts in the area.

The Church of St. Catherine in Honfleur is one of the most beautiful churches in Normandy. This stunning church is built entirely of wood, which is quite unusual in France.

It was built in the 15th century to replace a stone church that was destroyed in the 100 years war. Like many others in the area, the Church of Saint Catherine in Honfleur is a Roman Catholic church.

It was built in the style of a French market hall, with a seafaring twist. The church was meant as a tribute to the sailors and the seas, and incorporates many nautical decorative details, including a ceiling that looks like the hull of a ship.

There is also a bell tower that was built opposite the church, so that in case of fire or lightening, the church would not be affected as well.

Just behind the Vieux Bassin lies the Old town of Honfleur. With its charming old, half-timbered houses, it is a UNESCO world heritage site.

There are a lot of narrow alleyways, with a number of art galleries, restaurants, boutiques, and hotels in the area. You can easily spend a few hours walking around and collecting a few souvenirs.

If you enjoy impressionist paintings, you may want to visit the Eugene Boudin Museum in Honfleur. Boudin was one of the first French artists to paint landscapes outdoors and many of his works feature nearby Norman towns like Trouville-sur-Mer, Le Havre, and Deauville.

The museum also contains works from other 19th and 20th century artists like Monet, Courbet, and Pecrus, together with a collection of drawings and paintings bequeathed by Eugène Boudin to his birthplace.

Named after the Calvados department that it originates from in Normandy, calvados is a popular French digestif that has an alcohol content of around 40%. (It can also be served as an apéritif.)

It is a type of aged liquor from the French family of brandies, except made from apples. The apples are pressed and fermented into a cider, which is then distilled twice. The remaining eau de vie must be aged for at least two years in oak casks before it can be called Calvados. As Calvados ages, it becomes smoother so the price will be a function of the price.

Calvados has a smooth and rich slightly apple flavor and is served either dry or with ice, usually in a balloon or wine glass. In France, it is usually served by itself, or with a cheese plate after the main meal.

Normandy is well known for its cheese, with many varieties such as Camembert, Pont l’Evêque, Neufchatel, Boursin, Pavé d’Auge, and Livarot. There are many fromageries (cheese shops) in town where you can try these specialities and even make your own wine and cheese tasting.

I should note that some of these cheeses like camembert is unpasturized, so ask the fromagerie shop keeper before ordering.

You can also turn the camembert into a cooked appetizer with a baked camembert, if you don’t want to eat unpasturized cheese. You can read more about foods and drinks in Normandy here.

A marinière is a traditional long-sleeved sweater which has deep blue and white stripes. It was usually worn by sailers and seamen in the French Navy, before becoming a staple of civilian French fashion.

The fashion sprung from that doyenne of French fashion, Coco Chanel. During the First World War, Chanel regularly took seaside holidays and was inspired by the local sailors’ uniforms.

At her shop in Deauville she launched the “Navy Style”, a short marinière, a comfortable simple jersey in those hard times. Her marinières soon became much sought after, and luxury items.

These days, the stereotypical image of a French person usually includes a marinière and a beret. It is also sometimes called a Breton shirt in the neighboring French region of Brittany. You can also shop for a marinière here.

Just outside the town of Honfleur is the Pont de Normandie. It is a cable-stayed bridge that spans the Seine river linking Le Havre to Honfleur in Normandy.

It is the largest bridges in France and the 2nd largest after a bridge in Japan. The bridge was constructed over a 7-year period and opened on 20 January 1995. It is open to road traffic only.

How to get to Honfleur?

Honfleur is around 1h50 from Paris by car, and around 3h20 by train. You can also take a tour from Paris to Honfleur and around Normandy, to visit the sights in style.

One day is enough in Honfleur, however you may want to spend the night if you want to visit the D-Day beaches, Deauville, Caen, Saint Malo and Mont Saint Michel which are all within a 2 hour drive.

The following hotels are all within the charming center, so that you can walk everywhere and enjoy what the town has to offer:

14 Foods from Normandy (what to eat and drink)

D-Day Beaches and Memorials: 6 Sites to visit in Normandy