Skip to content
With discounts up to 20-40% in shop!
Visit Trouville-sur-mer on the west coast of Normandy in France. With more budget-friendly options than twin town Deauville, there is plenty to do in Trouville. 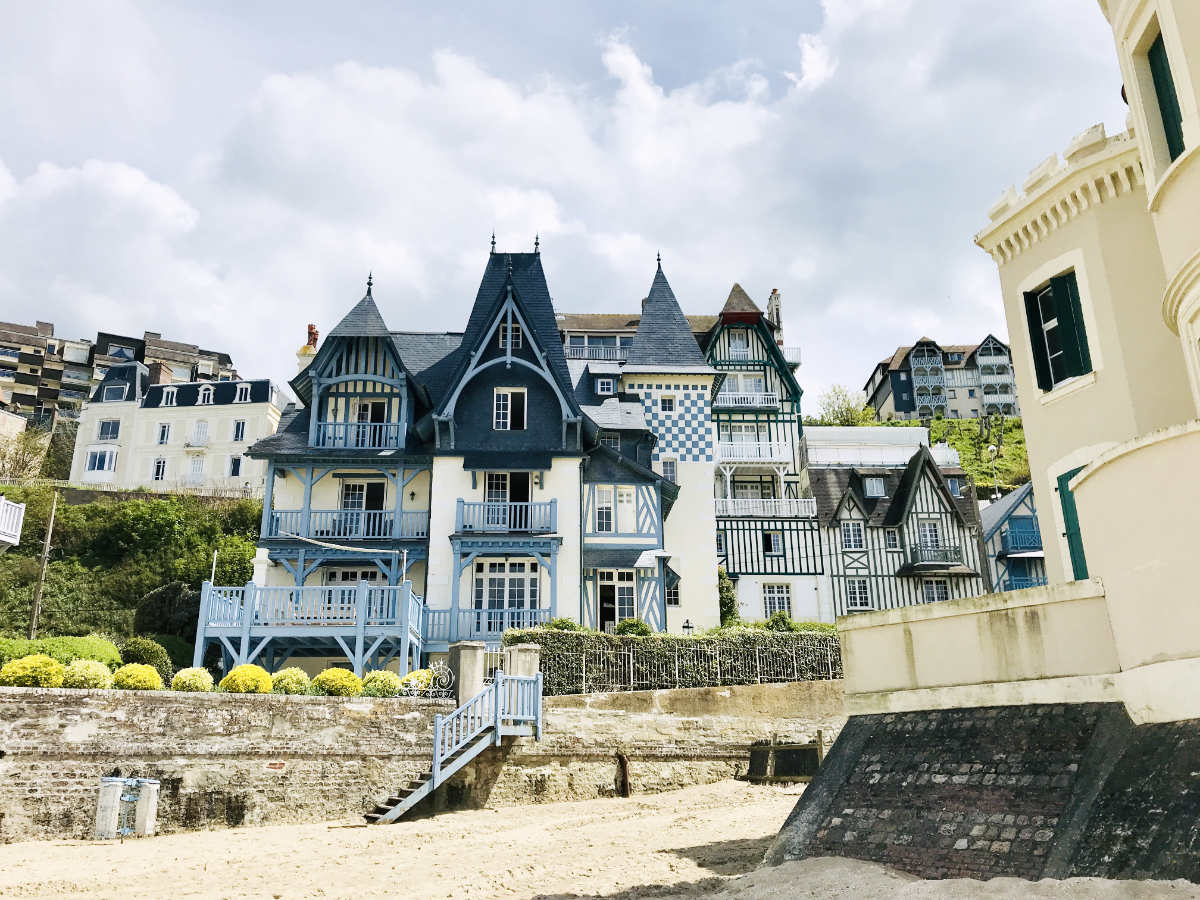 You may not have heard of Trouville-sur-mer before, but you’ve likely heard of its famous twin: Deauville. Located in the region of Normandy, at the mouth of the river Touques, Trouville sur mer is on the northern bank of the river, compared to bling-bling Deauville on the southern bank.

With high-flying Deauville attracting celebrities with its famous film festival, luxury hotels, and expansive beaches, Trouville has been the “ugly step-sister” of this relationship. Located about 1h45 drive away from Paris, this seaside resort town on the coast of the English Channel is part of Normandy and the Côte Fleurie.

Prior to the 20th century, it was Trouville that was the charming little town and fishing village attracting rich Parisians, with Deauville being merely marshland.

And the town of Trouville still holds a grudge. “Les meilleurs ennemies” or the best of enemies, as the French would translate.

It was Trouville-sur-mer that launched the fashion for sea resorts in the 19th century among the newly rich bourgeois who found themselves at the top of the social ladder after the French Revolution. With the arrival of trains to nearby Le Havre, the town seized the opportunity to build out its transport links.

However, a famous developer named Duc de Morny, half brother of Emperor Napoleon III, saw the opportunity as well. He bought up several acres of marshland in Deauville, and convinced Napoleon III and the aristocrats around him to purchase homes along the sea as it would be good for their health.

The marshland was turned into constructible land by putting walls alongside the river Touques, and the rich and famous began flocking to the more expansive Deauville which had kilometer-wide beaches due to all that marshland being filled in.

With a new casino and two 5-star Barrière hotels built in Deauville in 1913, it became the place to be. Trouville also decided to build its own casino (also a Barrière property), but the image of luxury and prestige in Deauville remains.

Today, the two cities share a train station “Trouville-Deauville” and it is telling that the name Trouville is first. The Union Bridge over the Touques was built in 1860 and links the two towns. (You would think they would combine townships to save on taxes, but this is not the French way.)

But where Deauville is loud and high-profile, Trouville is more discreet. With houses on the beach and charming narrow streets, Trouville has much to offer. These days if you are looking for a couple of days to spend by the beach and don’t want to break the bank, Trouville-sur-mer is a great place to go for a weekend away, making it a popular destination for Parisians and tourists alike. So let’s see what there is to do in Trouville sur mer, shall we? Allons-y!

Compare that to the beach in Deauville, where it is nearly impossible to get a picture of the Deauville boardwalk and the water in the same photo, the beach is so wide. The nobility of yesteryear used to complain how far they would have to walk on the beaches of Deauville in order to put their feet in the water.

On the other hand, the charm of having a house directly on the beach is very present in Trouville-sur-mer.

There is a reason that Trouville continued to charm painters and writers like Alexandre Dumas, Gustave Flaubert and Marguerite Duras spent long periods of time here. With homes and hotels perched on the hillside, you can have an excellent view of the shoreline from your bed.

Both casinos are owned by the Barrière Group, however the Trouville casino has the charm of having being built on an island. The casino also has a large theatre and ballrooms where balls, plays and other events occur regularly.

As in the Deauville casino, they have a classic, timeless game called Chemin de Fer (pronounced, “Sheh-mehn-day-far”), which translates to “the path of iron. It is sometimes called Baccarat, that used to be very popular in the 19th century.

If you have come all the way to Trouville-sur-mer, you will have to head over to the Deauville side for at least a few hours. With a larger casino, racetrack, and luxury shops, it is the “place to see and be seen”.

With its boardwalk dedicated to the stars of film and cinema, and expansive beaches, it is a busy hive of activity in the summer months. If the beaches in Trouville are too crowded, I recommend going to beaches in Deauville because they are much wider (since all that marshland had to be filled in).

The homes in Deauville are also quite beautiful architecturally, with a traditional Norman colombage construction that has been preserved. You can read more about visiting Deauville here.

Visiting the D-Day beaches may not have originally on your to-do list if you are planning a seaside holiday in Trouville-sur-mer, but you should know that the town is less than a 2 hour drive away from Omaha beach and some of the other D-day beaches.

If you are American though, you will want to head to Omaha Beach which is 62 miles (100km). It is this beach that arguably had the landing that was the most difficult of the 5 Normandy landings on that fateful, with the most loss of life.

There are many memorials and cemeteries in the area, and it is well worth the visit. You can read more about visiting the D-Day beaches here.

How to get to Trouville-sur-mer?

If you are staying in the city center, Trouville-sur-mer is quite walkable, with shops, restaurants and the beach nearby. However, some of the hotels along the coast are further away, and you may need a car to get around, especially if you are planning on visiting Deauville often.
In addition to Deauville, the towns of Honfleur, Saint Malo, and Mont Saint Michel are all within a 2 hour drive.

These hotels have great access to the beach, shops and restaurants as well as good ratings:
€€€ – Hotel Les Embruns
€€€€ – Mercure Trouville-sur-mer

Saint-Malo: All the reasons to visit the beachy fortress in Brittany