Skip to content
With discounts up to 20-40% in shop!
Visit Rouen, a medieval town that was once the capital of Normandy, near Paris. From Joan of Arc to its charming Old town, we cover the top things to see, where to stay, and more. 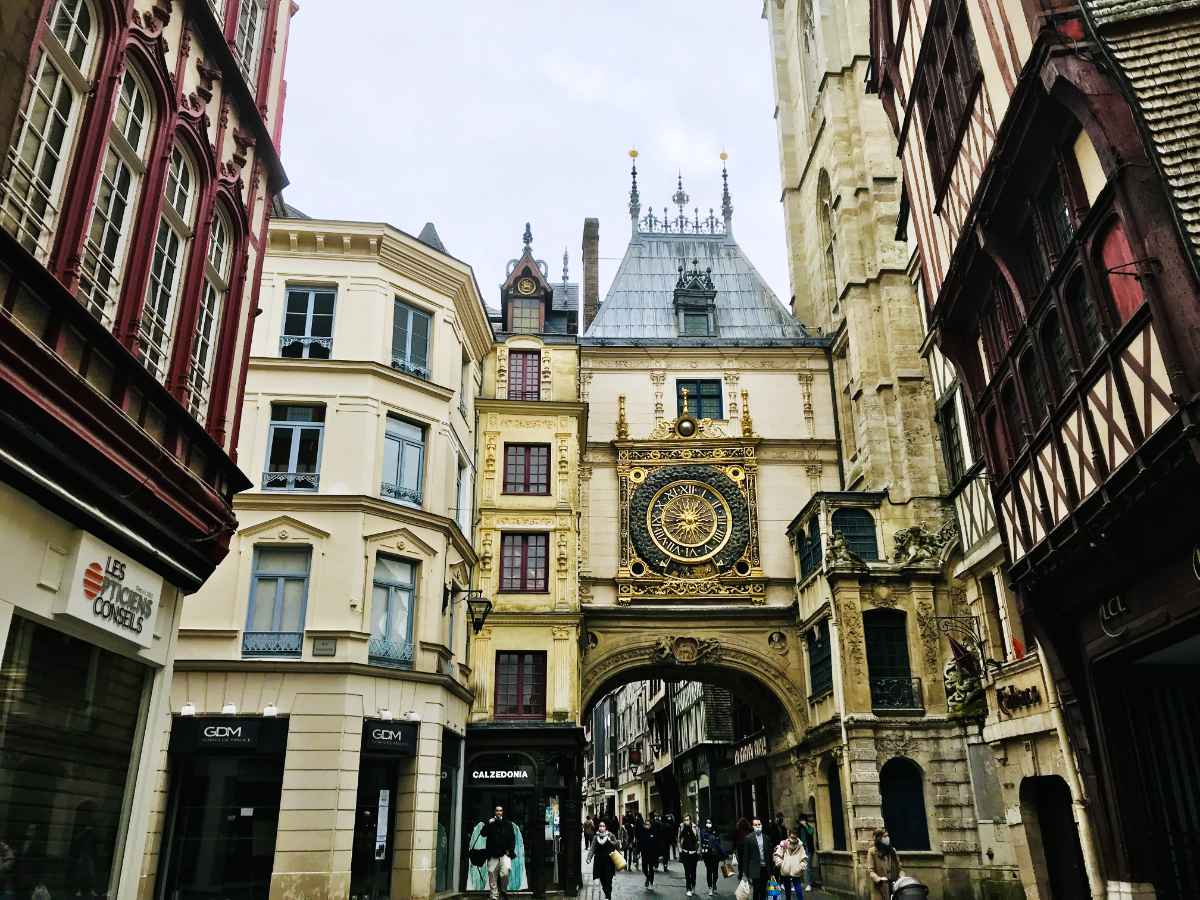 Rouen is one of those French cities, that is not high on the list of tourists. But this former capital of the Duchy of Normandy has enough old-world charm combined with a lively town center, to make it a lovely hidden gem.

The town of Rouen is about 50 km from Paris, downstream on the same river Seine. Being part of the Duchy of Normandy, whose lords sometimes swore fealty to the French kings (and sometimes didn’t), it was this strategic location that led the city to grow in size and importance.

But what really put Rouen on the map, when it comes to tourism in France, is a young girl named Jeanne d’Arc (Joan of Arc) who would change the history of France.

She was born in Domrémy over 460km away, but it was in Rouen that she died, burnt at the stake by the dastardly English and their allies on 30 May, 1431.

It was the midst of the 100 years’ war between England and France. Born to a relatively poor family, the young girl said that she received visions of the archangel Michael instructing her to support the French King Charles VII from the English.

Nicknamed la Pucelle d’Orléans (the maid from Orléans), she arrived in the French court at 17 years-old, dressed as a male soldier and made a strong impression on the King, whose armies were rapidly weakening.

The French King sent Joan on a series of battles, during which Joan was able to lead the French army to victory. Her appearance effectively turned the war over territory into a religious war.

On 23 May 1430, she was captured in Compiègne in the North of France by a group of French nobles from Burgundy, who were allied with the English. She put on trial by the pro-English bishop Pierre Cauchon on a variety of charges, including cross-dressing and heresy.

After being declared guilty, she was burned at the stake on 30 May 1431 in Rouen, dying at about 19 years-old.

She was declared a martyr, and in the 18th century made a symbol of France by Napoleon Bonaparte. In the 20th century, she was canonized by the Roman Catholic Church and made one of the patron saint of France.

Walking around Rouen, you will see several streets and landmarks that recount the history of this young woman in Rouen. But beyond that history, you will notice that Rouen is a bit of a student-town.

With a couple of universities nearby, the city comes to life with plenty of bars and restaurants, all set in a charming array of medieval cobblestone streets.

With plenty to see and do in Rouen, the city is definitely one you will want to visit. So let’s get to what is there to see in Rouen, shall we? Allons-y!

You cannot come to Rouen and not find the statue of Jeanne d’Arc (aka Joan).  A discreet statue of her is placed on the side of Église Sainte-Jeanne-d’Arc to mark the spot where she was burned at the stake for heresy.

The church is a surprisingly modern building that has only been there since 1979, next to Rouen’s Old Market Square. On one side in the corner, you will find a small statue of Joan marking the exact spot where she died.

If you wish to know more about Joan, you can visit the Historial Jeanne d’Arc which is an interactive visit with reconstitutions and video showing what her life was like and taking you back to the 15th century. The exhibition is in English, French and German.

You can also visit Rouen Castle, which is really just a tower known the Tour Jeanne d’Arc. It is a dungeon where Joan was held in during the 4 months before her death. Today you can visit the tower, and even play an escape game in there.

Behind the Église Sainte-Jeanne-d’Arc, is the Place du Vieux-Marché or Old Market square. It is a large square with many restaurants terraces and shops, with several buildings in that traditional Normand colombage style.

One of the famous high-end restaurants and hotels in the square, the “La Couronne”, has been open since 1345. The restaurant is said to have welcomed many a distinguished guest, from American Cornélus Vanderbilt to Julia Child.

Inside the old market for which this area is named, you will find all the varieties of foods and drinks from Normandy, from cheeses to sausages and more.

3) Look for the Gros-Horloge

The Gros Horloge or “Large Clock” as it translates to in English, is a complex outdoor astronomical clock and belfry, that was made in the 14th century.

It is one of the oldest such clocks in France, and is installed in a Renaissance arch crossing the Rue du Gros-Horloge in the old part of Rouen.

Ther are two sides to the clock, with the renaissance facade representing a golden sun with 24 rays on a starry blue background. The phases of the moon are shown in a sphere on the upper part of the dial. It completes a full rotation in 29 days.

At the foot of the belfry is a fountain representing the love of the river (Alphée) and the nymph (Aréthuse) with Cupid flying above them. Under the number VI, a weekly planner shows the divinity symbolizing the day of the week:

If you look closely, you will see one of the angels on the clock has his head on upside down. This isn’t an accident, this was done on purpose by he workers, to show their displeasure at being paid late. You can climb up to the top of the belfry and have 360° views of the old city of Rouen.

Rouen Cathedral is a Gothic church in Rouen, Normandy, France. It is the seat of the Archbishop of Rouen, Primate of Normandy. The cathedral is in the Flamboyant Gothic style.

The cathedral was consecrated in 1063 in the presence of William the Conqueror, three years before he went off to England to defeat Harald in the Battle of Hastings. (He was still a fief to the French Kings at the time.)

The Cathedral captured the imagination of French impressionist Claude Monet, who painted what is called the “Rouen Cathedral series” in the 18th century. The paintings in the series each capture the façade of the Rouen Cathedral at different times of the day and year and reflect changes in its appearance under different lighting conditions.

You can find a statue of Joan of Arc in the Rouen Cathedral as well, with a sword thought to be her own.

The Cathedral also houses a tomb containing the heart of English King Richard the Lionheart. Richard didn’t die in Rouen, but it was a sign of the town’s importance that his heart was buried in this cathedral.

One of Richard’s ancestors, Rollo of the Vikings who became the 1st ruler of Normandy, is also buried in the cathedral. Rollo was the great-great-great grandfather of William the Conqueror, himself Duc of Normandie, and thus the current British Royal Family, the Windsors, are all direct descendants of Rollo.

The Old town of Rouen quite large, which is surprising considering how extensively the city was bombed in the lead-up to D-Day in WWII, and its aftermath. Like Caen, Rouen was large enough to be strategically important, as well as being on the Seine river directly accessing Paris.

However, a good portion of it was rebuilt in the old style, and these days walking through the city, you would never know how much the city suffered.

There are a lot cobbled streets, the old buildings and narrow alleyways, in the traditional Norman colombage style. Many of these have adapted to modern times by fitting in restaurants, bars, cafes and hotels. Walking through, there is a distinct feel of being lost in medieval times.

How to get to Rouen?

Rouen is easily accessible by SNCF TER train, taking around 1h20 from Paris, which has the closest airport. It takes the same amount of time to get to Rouen from Paris by car.
There are also day-trip tours from Paris that will take you around Rouen in style.

The city centre of Rouen is easily walkable. Indeed most of it is pedestrianized, so leave the car behind and make your way around on foot.

A day is likely sufficient to spend in Rouen, however, you may want to spend overnight. There are several universities in town, so it is a lively student town that has many bars and restaurants open in the evening.

The following hotels are within walking distance to all the top sights in Rouen:

On the other side, near the Old Market Square:
€€€€ – Best Western Plus Hotel Litteraire Gustave Flaubert

Saint-Malo: All the reasons to visit the beachy fortress in Brittany