Skip to content
With discounts up to 20-40% in shop!
Visit Monaco on the French Riviera, in all its luxury. We cover the casinos, palaces, beaches, shops top things to see, where to stay, and more. 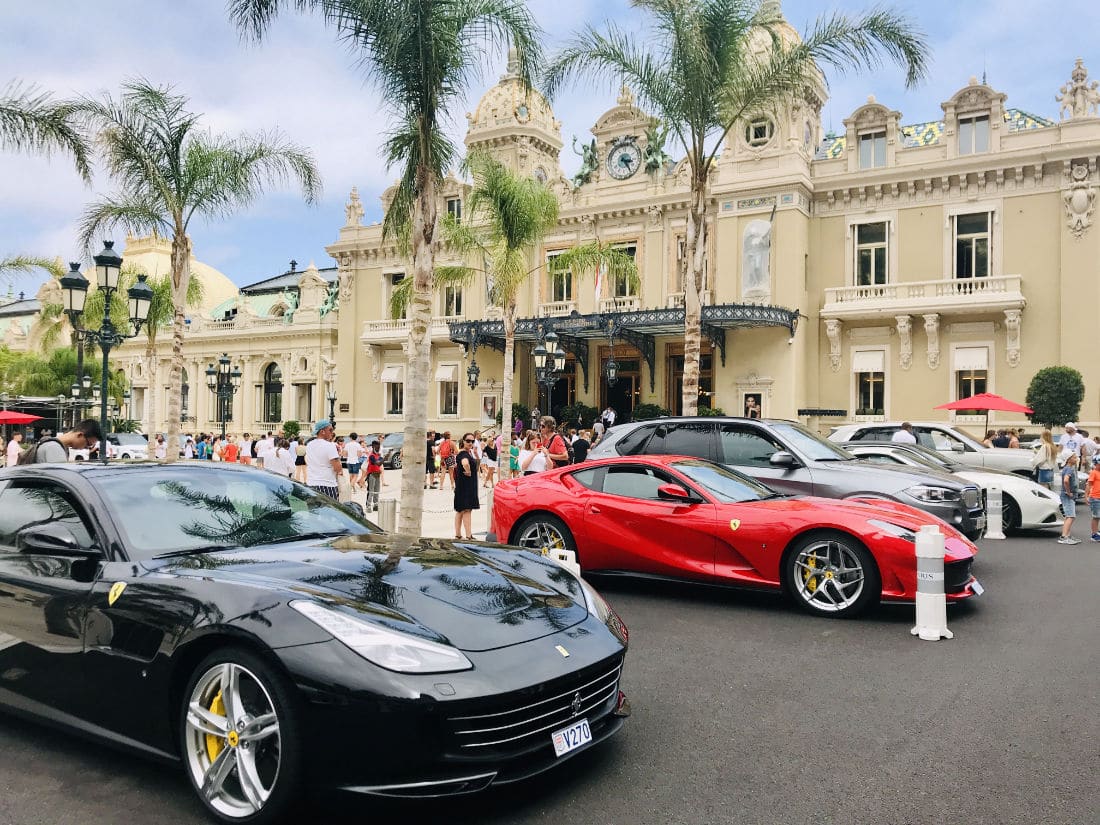 Cars in front of the Casino in Monte Carlo, Monaco
(As an Amazon affiliate, we may earn commissions for certain purchases. Please note, all information is provided for entertainment purposes only. See our disclosure policy for details.)

Located on the French Riviera, Monaco is an independent principality with France on its border. Known for luxury and glamour, this playground for the rich and famous actually has something to offer everyone.

Monaco is known for its glitzy casinos, yachts, luxury hotels and ultra-expensive real estate. The second smallest sovereign state in the world (after the Vatican), this tiny country is packed with history and culture. Built on a headland, it’s a truly unique place and a must for anyone who loves beautiful architecture and crystal clear waters.

This glamorous principality has a population of around 40,000 people, but less than 10,000 are Monégasque citizens. Although the official language of Monaco is French, plenty of people speak English due to the international nature of its full-time residents and visitors.

Monaco attracts the rich and famous because residents in Monaco do not pay income tax, attracting plenty of folks looking to reduce their tax bill. Monaco can afford to not require income tax due its extremely profitable casino that been supplementing the principality’s finances since the mid 19th century.

With a somewhat strained relationship with France throughout its history, the principality now rests tranquilly with France as a neighbor on three sides. (French citizens who move to Monaco are still required to pay income taxes in France in a special agreement drawn up between the two countries to keep the peace.)

But when visiting, it is the casino, royal palace, and pastel-colored buildings that you notice. Monaco has a total area of 2.02 sq miles, but is long and narrow, requiring a car (or bus) to get around.

Recently, dredging works have been occurring in the harbor to expand the size of Monaco and build new construction buildings for that insatiable supply of buyers who wish to claim residency in Monaco. Costing over around €2 billion, the Monaco Land Extension project is expected to add 14 acres (6 hectares) to land-poor Monaco. (If you had a beachfront apartment before, you likely don’t any more as it is no longer “beachfront”.)

But if you are only planning to visit Monaco rather than move there, you are in luck, because there is plenty see and experience in the area. Here are some of our top things to do in Monaco. Allons-y!

The first thing most tourists in the area will want to check out is the changing of the guard in front of the Palace of Monaco.

Built in 1191 as a Genoese fortress, it has been bombarded and besieged by many foreign powers on from both France and Italy. Since the end of the 13th century, it has been the stronghold and home of the Grimaldi family who first captured it in 1297.

Due to the small size of the principality, the castle has been substantially renovated, as frankly there was no other place to build another palace.

The most recent substantial renovation was done by Prince Ranier III and his wife Grace Kelly in the latter half of the 20th century. As it is still the Grimaldi family home, most of the palace is not open to visitors, although certain state rooms are open to the public during the summer.

The changing of the guards however is open to everyone one, each day promptly at 11:55 AM in front of the royal entrance on the Palace Square. The palace is on a hill so there are excellent views of the principality below, the port and the Mediterranean in the distance.

Just next to the Palace entrance, is the start of a series of narrow alleyways that take you to the old part of Monaco.

With several small shops, cafés and restaurants, this is the perfect place to have lunch and pick up a few souvenirs.

You can also head to the Museum of Old Monaco (Musée du Vieux Monaco) and the Princess Grace Irish Library containing the Princess’ personal collection.

There are also several small chapels in the area which are nice for a quick visit:

3) Cathedral of Our Lady Immaculate

There are several churches in Monaco, but the Cathedral of Our Lady Immaculate (Cathédrale de Notre-Dame-Immaculée in French) is the principality’s main Cathedral.

Located at the edge of the old town, it is sometimes called Saint-Nicolas Cathedral of Monaco, which is the name of the old church that was demolished in 1874 to make for the current building. It is also sometimes just called the Monaco Cathedral (Cathédrale de Monaco), which makes it all rather confusing when you are looking for it on your GPS on your phone.

A church has stood here since the 13th century, and the Monaco cathedral is the place where many a royal wedding has taken place including that of Grace Kelly and Prince Rainier, as well as the current Prince Albert II and his wife Charlene.

It is also the resting place of numerous members of the Grimaldi family, such as Grace Kelly when she died in 1982 and Prince Rainier who was buried alongside her in 2005.

The cathedral itself was built in gorgeous light limestone with an its interior of impressive Carrara marble. It is free to enter and to pay your respects.

Now, before you head over to the casino which is on the other side of town, you may want to wander through the Jardin Exotique which is next to the Old town and Palace.

This “exotic garden” is filled with various plants, including those brought back from a trip to Mexico in the 1860s. Along with plants, the gardens are on a cliff site, providing excellent views of the city below.

There is also a grotto underground that was discovered during construction in the early 20th century. Called “Observation Cave” because of the former presence of a little astronomic observatory, it starts at about 100 meters above the sea level and goes all the way down. Rests of bone fragments of the animals and prehistoric men have been found in these limestone caves, which are well worth a visit.

On the other side of town (which is about an 10-15 minute walk uphill) is the very famous Casino de Monte-Carlo. Even if you don’t enjoy gambling, I recommend heading over to check it out. Either way, there are several luxury stores like Chanel and Louis Vuitton right next door, which might be more up your alley!

The idea for a casino came from a clever businesswoman named Maria Caroline Gibert de Lametz in the 19th century. A former French stage actress (the predecessor to Grace Kelly if you will) she became Princess Caroline when she married the reigning Prince of his day, who found his coffers rather dry when the locals refused to pay taxes.

With the windfall of the casino, Monaco soon earned enough to manage its finances without an income tax, setting it up to become the luxury enclave that it is today.

These days, there are actually 3 casinos in Monaco:

They are all operated by the same company, the Société des Bains de Mer. However, it is the 1st one, the Casino de Monte Carlo that is the flagship and the most famous. Children are not allowed in the casino, and there is a bit of a dress code. In addition, there is an entry fee into certain parts of the casino, which is returned to you in chips that you can gamble with.

6) The cars and the boats

If you haven’t guessed already, there is plenty to people watching to be had in Monte Carlo, and Monaco in general. With French bourgeoisie mixing with Italian, English, American and Russian aristocrats, there is plenty of bling-bling, if you will.

The Formula 1 race, the Grand Prix of Monaco, runs through the streets of Monaco at the end of every end-of-May or early June, attracting thousands to the area. Even if you miss the Grand Prix, you can still visit the Collection de Voitures Anciennes, a collection of antique cars that was initially begun by Prince Ranier III in the 1950s.

Spend some time admiring the various boats and the cars, and see if you can make a few friends 😉

Back near the harbor-front, is the Oceanographic Museum of Monaco. It was inaugurated in 1910, and had the privilege of having famed French diver and scientist Jacques-Yves Cousteau as director from 1957 to 1988.

If you are visiting with children, a visit here is a must. There are twin tickets available for the museum with the Jardin Exotique or la Collection de voitures.

The Plage de Larvotto, or Larvotto beach, is the principality’s most popular beach, with several beach clubs and cafés attracting the crowds. It is a manmade sandy beach that can get quite crowded in the summer months.

The waters are clear and beautiful, and with a rented beach lounger and a cocktail in hand, you can spend many an hour relaxing in the sun. It is about 2-3 km from the center of town, so you will need to drive or take a local bus (5,6, or the LR100).

How to get to Monaco?

Monaco is easily accessible by train from Nice, Cannes, and other small towns along the coastline of French Riviera.
It is about 3 hours by car from Marseille, Avignon, and Aix-en-Provence.
However, if you are coming from Saint Tropez, I highly recommend going by yacht as the car traffic on the way will be terrible 😉

The city is relatively easy to get around on foot, once you arrive, but if you have small children or need handicap access, I recommend looking into the local buses which visit all the main tourist attractions.

You can visit Monaco in a day, but if you wish to partake in the nightlife, then I recommend spending at least one night. 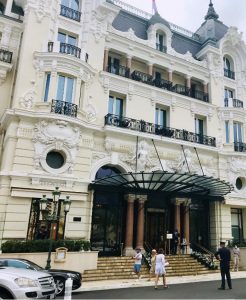 Monaco hotels tend to be quite pricey, so a lot of people opt to stay in Nice and take the 30-minute train over for a day trip.

Nearby Nice has plenty of bars and restaurants around Old Town, but in Monaco, it may be a once-in-a-lifetime opportunity to rub shoulders with celebrities and the ultra-rich. As we say in French, c’est à toi de décider, it is for you to decide!