Skip to content
With discounts up to 20-40% in shop!
Visit Saint Tropez on the French Riviera, in all its glory. We cover the beaches, top things to see, resorts, bars and nightclubs, where to stay, and more. 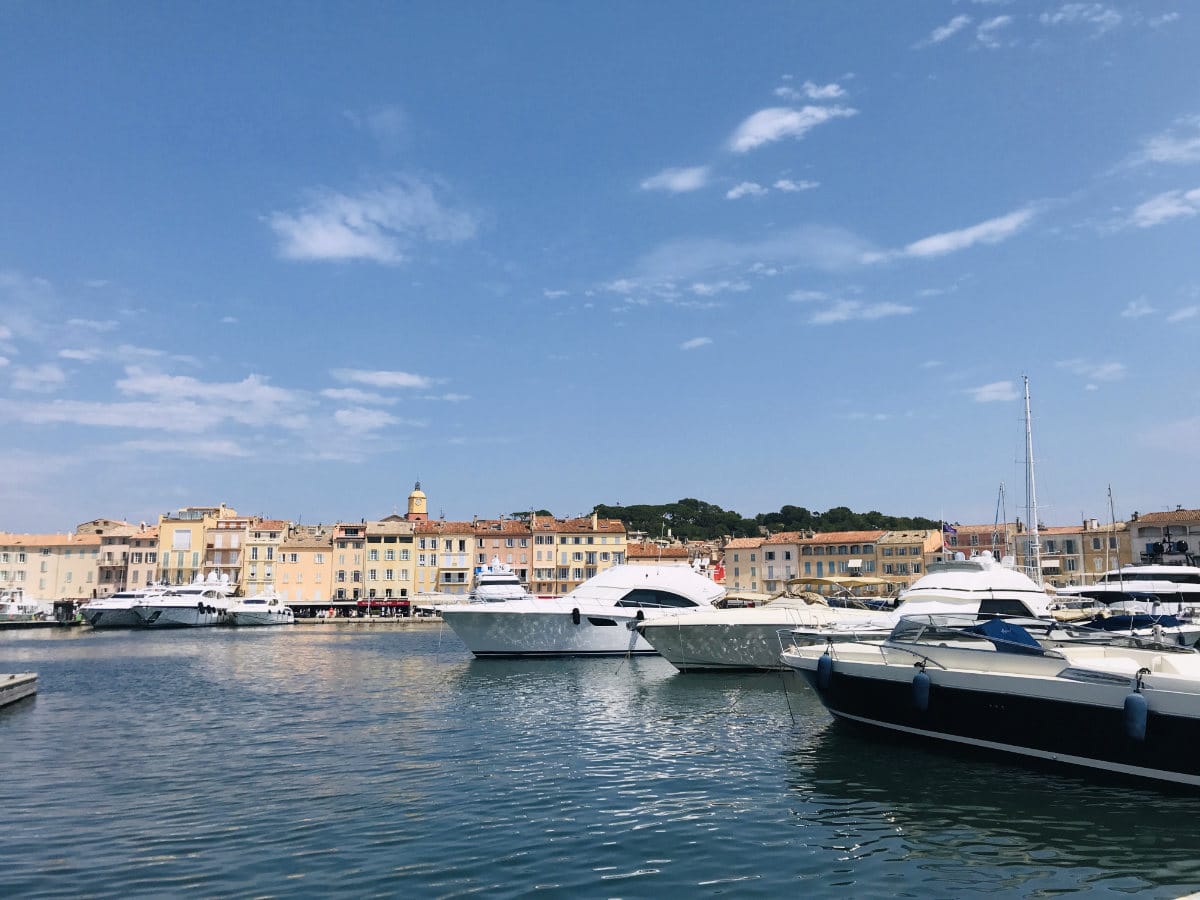 When it comes to the French Riviera, there are numerous glamorous destinations to visit. From Cannes to Monte Carlo, each town has its own culture and vibe. But if you want a luxurious beach holiday that will help you relax and enjoy life, Saint Tropez is the place to be.

Saint Tropez is a beautiful beach resort town on the French Riviera in southern France with a year-round population of about 4,000 people. But it is its visitors who who really give it that sheen and glamour.

This part of the south of France has been a haven for the rich and famous since the birth of the jet set in the 1950s, and St. Tropez is at its beating heart. It was the film “And God Created Woman” was filmed there in 1956 starring Brigitte Bardot that really put Saint Tropez on the map. The film showed off the area’s beauty and charm, and the town has not looked back ever since.

The town owes its name to the early martyr Saint Torpes. Legend tells of his beheading in Pisa, Italy during the reign of Emperor Nero, with his body placed in a rotten boat along with his dog. The body is said to landed at location of the town of Saint-Tropez, giving the settlement there its name.

The area was a mere fishing village until the 20th century. It later turned to be a fashionable seaside resort, famous for its yacht anchorage. Located in the Var department of the Provence-Alpes-Côte d’Azur region of France, these days it is a jet-setters dream. Just a short boat ride away from familial Nice and gritty Marseille, Saint Tropez is home to glitz and glamour of the French bourgeoisie, as well as aristocrats from around the world.

As one of the most famous resorts in the world, it and has been the playground of the rich and famous for decades, with a rich history of film stars, actors and celebrities, so keep your eyes peeled. It is also one of the most expensive places to own property on the coast, like nearby towns Villefranche-sur-mer and Saint-Jean-Cap-Ferret.

But it is one of those towns that I do not recommend for a day trip. The real glamor of Saint-Tropez is the people you meet and the friends you make. It is a party town, and just walking through its streets on a simple day trip, will not help you get to know this luxury enclave, compared to staying at least 1-2 nights.

And more specifically, there is the car traffic. The town is surrounded by steep hills and only has a couple of roads in, and a couple of roads out. Having family in the area, I once sat in traffic for over an hour, to cover a mere 10 miles. There is a reason the rich arrive by boat!

Without a train station, and with its biggest beaches too far to walk to, everybody arrives by car. So you can just imagine the traffic chaos.

But if you do make it the town center and find a parking spot, you will find plenty to enjoy. As a popular tourist destination on the south coast of France, there is plenty to cater to everyone, regardless of budget. It is a beautiful town with beaches, cafes, restaurants, shops and clubs along the waterfront.

The best things to do in St. Tropez include touring the beautiful setting, going out to eat in the best restaurants, visiting the most fashionable boutiques, and enjoying the beach activities. So let’s get to the top things to do in the area, shall we? Allons-y!

Saint Tropez is just a miles down the coast from neighboring Marseille, which was founded by the Greeks and Romans in 600 BC. The area became a popular trading port on the Mediterranean, and Saint Tropez was a natural harbour.

With that, sprung the old town of Saint Tropez, with its narrow streets, pastel buildings and tiny shops.

Today it is a lovely (mostly) pedestrianized area, and a great place to spend a few hours.

Along the harborfront, are several seafront cafés. The harbor is quite expansive, and you can walk all along it, crossing several restaurants and pop-up food kiosks serving anything and everything.

Once a quiet fishing village, you’d be hard pressed to find a fish and tackle shop in Saint Tropez these days. The town has become one of the most fashionable places in the world, where luxury names like Chanel and Louis Vuitton don’t hesitate to set up shop.

An an upmarket tourist destination, there are a number of luxury boutiques and designer restaurants. A few of them are set in private pavillons, which also host special events and parties for their guests. You can wander through, but do be sure to warm up that credit card.

The heart of the town of Saint Tropez has to be Place des Lices. A central and expansive square, this is where the market is held every Tuesday and Saturday mornings throughout the year.

The market sells everything from fruits and vegetables, cheeses and charcuterie, to clothing. It is also a great place to pick up local handicrafts and souvenirs, as well as flowers and other decorative items.

There are also a couple of small cafés with terrasses in Place des Lices, to have a coffee or a meal and people watch.

In order to find the best beaches, you have to go outside the city center of Saint Tropez. The town does not have a long expansive beachfront, like some other Mediterranean cities like Nice.

On the east side is the famous Pampelonne beach is one of the most popular. It is a sandy beach and has several beachclubs and bars, like Club 55, Moorea beach club, and Nikki Beach. It is around 5km so you will need transportation, from Saint Tropez.

This beach is divided into five sectors:

There are various paid parking lots in the area, but it does get quite crowded and difficult to find a spot. If you are looking for beach “to be seen”, this is the place to be.

On the other side is Plage de la Bouillabaisse (in tribute to the local speciality the Bouillabaisse). It is gorgeous sandy beach as well, with a beautiful view of the port of Saint-Tropez and of the town of Sainte-Maxime.

The big problem here is parking. There are only two small car parks near the beach, and it is quite difficult to find a spot.

Other popular beaches in the area include Plage de Tahiti, Plage des Salins, and the beaches near Sainte Maxim.

After a day at the beach, you may be interested in the nightlife. Saint Tropez is a party town, and there are plenty of places where plenty of folks (including the rich and famous) party all summer long. The top bars in the area include:

Other nightclubs in the area (which easily go on till the early hours of the morning) include:

The nightclubs all have a dress code, to get your bling-bling on and dress to impress.

St. Tropez has a large number of luxury yachts and sailing boats, which are well represented in its many ports. The famous and rich often pile into yachts for the week in St. Tropez.

If you made friends the evening before at the nightclubs, you just might be invited onto their boat the next day (we can only hope)!

Either way, there are plenty of small tourist boats who will take you out into the harbour for a jaunt around the Mediterranean

If you are looking for a bit more history than just partying, head over to the Citadel that looks down on the port of Saint Tropez.

Built and rebuilt as a military stronghold in the Middle ages, the fortifications have withstood many a battle and invasion as this part of Provence did not always belong to France.

During WWII, landings took place here at Saint Tropez as part of Operation Dragoon on 15 August 1944. (The landings were supposed to be part of D-Day, but were delayed due to lack of resources.)

These days the Citadel is a maritime museum that you can visit, with historical accounts of the events that have occurred here.

Along the town’s waterfront near the Old town, is a small beach that leads to the Sentier du Littoral.

A hiking path, it is the point from where you can hike 5 miles (9km) all along the coastline to discover the Bay of Canebiers as well as the beaches of Moutte and Salins.

There are excellent views of the coastline and the path is not very difficult, so if you enjoy hiking, this is a must.

For art lovers, head down to the Musée de l’Annonciade which houses an important collection of paintings from internationally renowned artists who lived in the area.

There are many important works from artists like Paul Signac, Henri Matisse, Henri Edmond Cross, George Seurat and more.

The museum is housed in the former Notre-Dame de l’Annonciade chapel and is a great place to spend an hour or two.

While not in Saint Tropez itself, there are a couple of casinos in neighboring towns, if you wish to pick up the dice.

The Barrière Group is the same group that runs the famous casino in that other French luxury beachtown, Deauville on the coast of Normandy.

Saint Tropez has a lot of events during the year to attract the local and foreign tourist crowd. These include:

How to get to Saint Tropez?

Saint Tropez doesn’t have a train station, so the nearest high-speed train station nearby is in St. Raphael Valescure, which has connections from Paris, Marseille, Cannes, and more. From here, you will have to take a taxi or rent a car.

For the higher-end, there are plenty of helicopter connections from Nice and Monaco. Or you could always take your yacht!

If you enjoy beaches and parties, I recommend staying at least a few nights to really get into the local scene. Saint Tropez is all about the people you meet and the friends you make, so a simple day trip will not get you the true vibe of this French Riviera enclave.

For easy access to nightlife and all the action, I recommend staying in town, within walking distance. It may seem like a splurge, but believe me, it will be worth it!

Grasse: the Perfume capital of Provence