Marseille is a city with a reputation, even within France. But in recent years, it has undergone a transformation. The ancient Greek city on the French Riviera, near the rolling hills of Provence, has so many things to see and to experience.

Now, you might think that I am biased since I have family in the area, but rest assured that the city was even crowned the European Capital of Culture in 2013. With plenty of things to do in Marseille, this guide delves into the best attractions, how to get around, things to do, and more.

☞ READ MORE: Paris vs Marseille: A History of Rivalry on and off the football field

As I said before, in recent years the city has recently undergone a renaissance. It was never the prettiest city to look at, especially compared to jewel-box Paris. It has a grittier old-age look.

As such, the ancient greek harbor, the Old Port was completely renovated in 2012 with improved traffic circulation and a new metro station underneath.

Depending on what time of the year you go, there are all sorts of attractions, such as a large ferris wheel in the center, a weird mirror art installation, the Christmas market, boats galore, and a ton of bars and restaurants. This natural harbor has been the heart of the city since 6 BC.

There’s plenty of restaurants and bars around, so this is always where I recommend friends stay for a nice night out and an easy walk back to the hotel.

Hotels around the Vieux Port:

At one end of the Vieux Port, you will find the new Museum of Civilisations (Mucem – Musée des Civilisations de l’Europe et de la Méditerranée). Marseille’s newest attraction opened in 2013 when the city was designated the European Capital of Culture. Built on the site of the historic Fort Saint-Jean, it is a remarkable modern art building with ancient artifacts inside.

Pro tip: Plan to have a coffee in its amazing Le Mole Passedat Café on the terrasse of the Mucem.
It can get quite crowded, so book your Skip-the-line tickets here.

3) Take a walk through Le Panier

The oldest neighborhood in the city, Le Panier is right next to the Vieux Port and Mucem.  The area barely survived the Nazis, who tore down all the other old buildings around the Vieux Port and the Hotel de Ville. Nevertheless, with substantial rehabilitation, this area today attracts artists and tourists alike.

With its dozens fo narrow cobblestone streets and charming little squares, you will step back into historic Marseille. You can read more about Le Panier here.

Pro tip: Wear good shoes, and if you have small children, take a toddler carrier. Its hilly streets, cobblestone footpaths, and narrow pathways are not the most stroller-friendly.

Known as the Bonne Mere to its locals (Good Mother), this Basilica overlooking the Vieux Port is the highest natural point in Marseille, visible from everywhere.

I’ll be the first to admit the Cathedral is not the easiest to get to. But the views are worth it.  There used to be a funicular direct from the Vieux Port, built by Gustave Eiffel’s company (of Eiffel Tower and Statue of Liberty fame), but that closed in 1967.

Today there are several public buses running up to the Basilica. You can read more about Notre Dame de la Garde here.

Pro tip: Take the Petit Train (Tourist train) that runs from the Hotel de Ville (City hall) next to the Vieux Port. Trains run several times a day, and tickets can be purchased online. Or for something different, try a Segway tour.

Given that this is the French Riviera, no trip to Marseille would be complete without a trip to the beach. Prado beach is the largest beach in the city, with several restaurants and bars directly and a festive atmosphere at any time of the day or night.

Pro tip: Marseille is famous for its camion pizzas (food trucks) so near the Prado is the perfect time to get try one. If you eat pork, try a pizza with figatelle, a corsican sausage that is a delicacy in the area.

6) Take a boat out to Les Calanques

A set of cliffs to the west of the city, Les Calanques are a magnificent natural wonder. With towering rocks and aquamarine clear water, you can decide to hike, swim, or just take it all in.

Drive over to the small fishing town of Cassis if you prefer to explore the Calanques by land, or take a boat leaving from the Vieux Port.

Pro tip: Wear hiking boots if you go by land, those rocks are slippery. Bring a bathing suit.

7) Have a night out at Cours Julien

Street art with an edge, Cours Julien is the trendy place-to-be about a 10-minute walk from the Vieux Port. With graffiti everywhere, quirky little shops and eclectic bars and restaurants, this is where the cool kids hang out.

There is the main square which has a lot of bars and restaurants, but do explore the side streets such as Rue des 3 Mages and Rue des 3 Rois which have plenty small restaurants with everything from local provençale offerings to thai food takeout.

This is also a great area of the city to stay in, with plenty of nightlife to make it easy to get back to your hotel.

Pro tip: Visit Espace Julien for live music nearly everyday. Tickets can be purchased online, or at the door, depending on the event’s popularity.

8) Learn the history of Château d’If

If you prefer a boating trip with a bit of history, head over to Château d’If. It is the on the smallest island in the Frioul archipelago, and the site of fortress prison (a predecessor to the famous Alcatraz in California).

Château d’If hit new heights in pop culture when it was featured in Alexandre Dumas’s Count of Monte Cristo. It was also reputed to be one of the prisons where the famous Man in the Iron Mask was held. While his true identity remains a mystery, he was reputed to the older brother or twin brother of the Sun King Louis XIV.

While ancient Paris was razed to the ground in the 1850s and rebuilt by Baron Hausmann, Marseille did not experience this sort of large scale city-planning. The city remains a hodgepodge of buildings that have been built over time, and narrow streets that have turned into one-ways to accommodate today’s traffic. Marseille is one of the most grid-locked cities in France.

There is a new metro system and an elaborate system of trams and buses put in place, but it is not as connected as Paris is.

If you do decide to drive, make sure you have a good up-to-date GPS system because a lot of the roads in the city are one-way streets, and getting around can be tricky. (Even we struggle driving around, and my OH grew up here!)

Alternatively, your best bet might be to book tickets for the hop-on-hop-off buses.

OM fans are some of the most passionate football fans in the world (we are not biased), and they are rightly proud of their brand new stadium, Stade Velodrome.

If you are visiting between October and May, you may want to take in a game or take a tour of their new museum in the stadium. With their banderoles, chants of Aux Armes, and fireworks all organized by the different clans of fans, it is a world away from North American sports.

The lyrics are inspired by the French National Anthem, La Marseillaise.

Pro tip: The Fan groups usually sit behind the goals or the narrow sides of the stadium (the tribunes), so book your tickets based on how in-depth an experience you are looking for!

The quintessential apéritif of France, Pastis de Marseille is an institution. With a fresh taste of anise seed and liquorice, it is somewhat similar to the Greek ouzo, which makes sense since both are on the Mediterranean.

With an alcohol strength of 45%, you then dilute with water, depending on how strong you want it and your preferred taste. Read more about how to serve yourself a pastis.

If you are looking to do some shopping, you can’t go wrong with these two malls which are right next to each other. While Les Terrasses is a new modern mall with every shop imaginable, Les Docks is a set of old warehouses that were completely renovated inside while still retaining its old-world industrial charm.

Pro tip: Don’t miss the large expansive terrasse with its cafés and restaurants on the 2nd floor of Les Terrasses du Port.

Walk along La Canebiére, aka what the locals call the “Champs-Elysées of Marseille”. A large avenue with beautiful classical buildings, the street has many shops and cafés, along with the city’s Grand Theatre where operas and other cultural events are held. The official shop of Olympique de Marseille is also on La Canebiére, if you would like to take home a souvenir jersey.

14) Take a day trip to Aix-en-Provence

You cannot come all the way to Marseille and miss out on visiting Aix-en-Provence. The ying to Marseille’s yang, the chalk to the cheese, the chic (and rich) town of Aix-en-Provence is only 30 minutes away on the highway. Sometimes called the 21st arrondissement of Paris, this fortified town with its old city walls has all the charm of a small town in Provence.

☞ READ MORE: Chic in the South of France: Top Things to do in Aix-En-Provence

Just behind the Old Port is Rue Saint Ferreol which is a long pedestrianized street with shops along it. You will find most of the large European brands here, so warm up your credit cards!

How to get to Marseille?

The easiest way to get to Marseille is by high-speed train. It is a mere 3 hours away from Paris.  If you drive, it will take around 8 hours. There is also an International Airport, with direct flights from London, Amsterdam, and other major European capitals.

When is the best time of the year to visit?

Marseille is lovely all year round, but don’t be fooled by its location on the French Riviera. In winter, it gets cold especially with a weather phenomenon known as the Mistral. High winds mean you will need a good winter jacket, and you will not be sunbathing on the beach.
On the other hand, winter is a perfect time to catch a football game, if you want the OM experience.

Pro tip: Remember to do the bises 3 times (rather than the Parisian 2).

So will you be putting Marseille on your France Bucket List? Comment below and let me know. 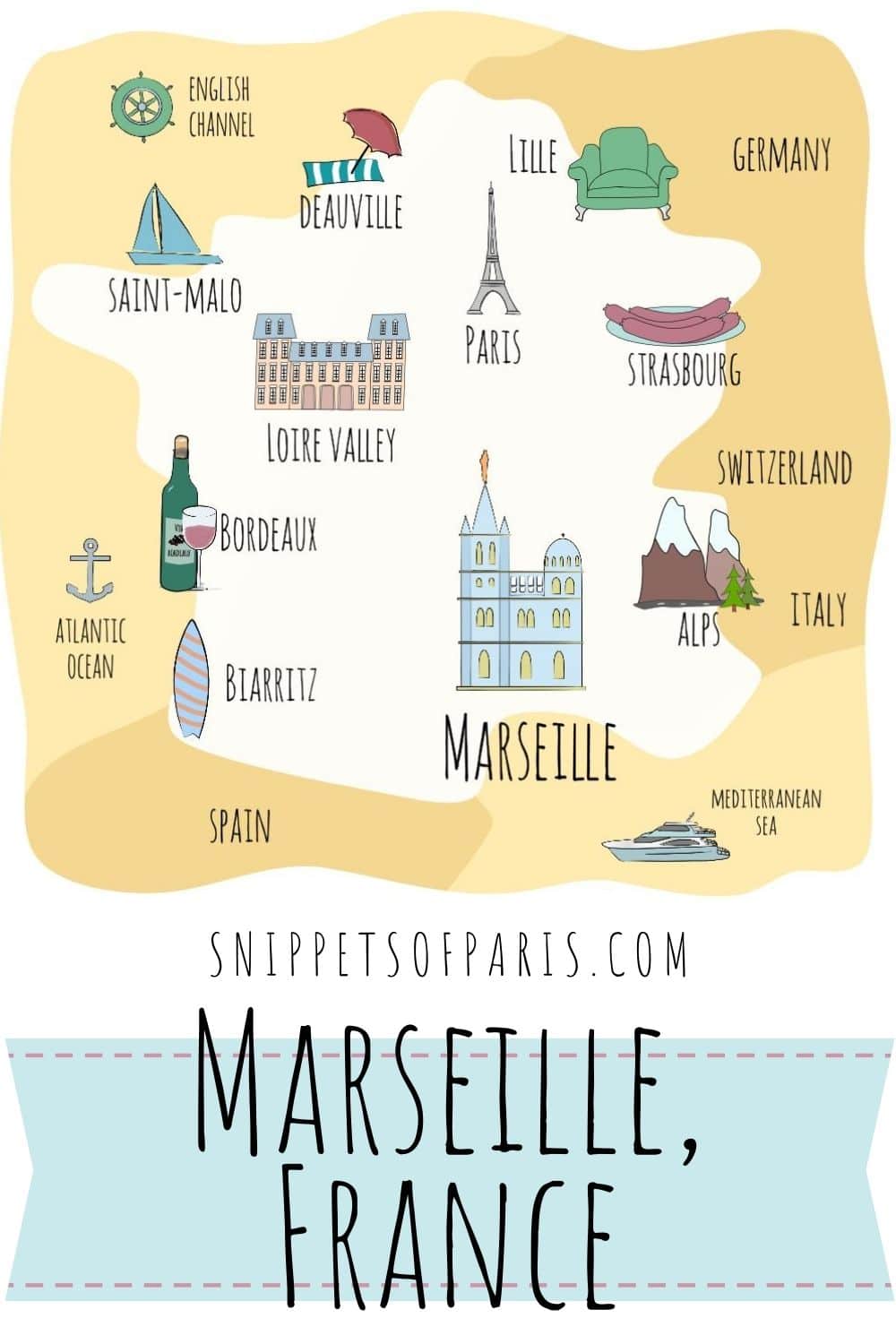 Wondering what life in France is really like? After living here for the past 10 years, I can tell you all about it! There’s more to Paris than the headlines and those oh-so-perfect photos on Instagram. Go behind closed doors for fun anecdotes as well as the unvarnished truth on those intriguing French habits 😉