Skip to content
With discounts up to 20-40% in shop!
Tags: Châteaux
Château de Chenonceau is that iconic enchanted castle built on water. This unique chateau near Amboise in the Loire Valley crosses a river and marks history.
(As an Amazon affiliate, we may earn commissions for certain purchases. Please note, all information is provided for entertainment purposes only. See our disclosure policy for details.)

There are many royal Châteaux in the Loire Valley of France, but the most emblematic has to be the Château de Chenonceau. Not on dry land, but on a river, it immediately catches your eye with its elegance and majesty.

About 20 minutes outside the city of Amboise, this is one of the most beautiful castles in France. It was not a place to rule, like other royal castles like Versailles or Fontainebleau, but a private retreat. The Chateau Royal d’Amboise nearby was for Royal Kings.

Château de Chenonceau instead became known as the Ladies’ castle or Queen’s castle, for all the famous women who lived here.

Background before visiting the Château

Before visiting Château de Chenonceau, you must know that it has had a long and tumultuous history, being destroyed or nearly destroyed on several occasions.

The Château was originally constructed in the 13th century by the Marques family, but then destroyed when a family member committed treason. It was then acquired and rebuilt by the Bohier family, and then seized a few years later by King François I, for unpaid debts.

François I’s son, Henri II then gave the Château to his favorite mistress Diane de Poitiers. As you can imagine, Henri’s wife was not happy.

Diane de Poitiers was fiercely intelligent and involved in state affairs. It was she who built the iconic bridge portion of the Château, and improved on its elegant design, spending lavishly. She also had a private access built under the bridge-span, so that she could discretely go bathing in the river.

Catherine de Medici (the wife) could only watch and fume. She waited till her cheating husband died, and forced Diane to exchange Chenonceau for another castle nearby, Château de Chaumont which was less grand.

Catherine also did her own renovations on the Château, putting her own stamp on it to claim it as her own. She was Regent of France at the time, given the young age of her son on the French throne. It was Catherine now who had all the power.

Diane would get her revenge however, as Catherine’s life was not a happy one. Catherine lost all three of her sons quite young. The eldest son (the 1st husband of Mary Queen of Scots) died of illness at 16. The 2nd son died at 23, and the 3rd son died at 37.

Upon his death, Catherine’s daughter Margot became Queen with her husband Henry IV, but she couldn’t have children, bringing Catherine’s legacy in France to an end.

At the Château, you can visit the bedroom of the 5 Queens: the 3 daughters-in-law and 1 daughter who became Queens of France with their husbands. (Catherine’s oldest daughter was the Queen of Spain, making her the 5th Queen.)

AFTER CATHERINE: The Château passed through several indebted relatives of Catherine before being bought by the Duke of Bourbon in 1720. Little by little, he sold off all of the castle’s contents and many of its contents ended up at the Palace of Versailles. The Château was used as a personal residence by private owners, as well as a hospital during WWI.

WWII: And World War II happened. The Germans invaded France, but only took full control of the northern half. The southern half was to be governed by the French Vichy government. In practice, this meant there was a “line of demarcation” between the 2 halves of France.

As luck would have it, Château de Chenonceau happened to be directly on the line of demarcation, which was the River Cher. The entrance to the Château was in the occupied Right Bank, while the bridge gallery crossed the river to the free Left Bank.

The owners of the Château, the Menier family, allowed the French Resistance to pass large numbers of refugees and fighters into the free zone, by moving them through the castle. Many lives were saved because of their courage.

While the Germans were aware of the subterfuge, they couldn’t prove it. A German artillery unit was kept nearby throughout the war, ready to destroy the Château if given the order.

Interior at the Château

When you enter Château de Chenonceau, you immediately notice that famous Grand Gallery which spans the entire length of the bridge across the River Cher. On the floor above this gallery is an exhibition with stories of the famous residents of the Château.

You can also tour François I’s drawing-room, the kitchens, and several bedrooms upstairs. There are the bedrooms of Diane de Poitiers and Catherine de Medicis, the bedroom of the “5 Queens”, and more.

One of the daughters-in-law of Catherine de Medici, was a very pious woman. After her husband died, Louise of Lorraine painted of the bedrooms entirely in black as she mourned his loss for the rest of her life (11 years).

The dueling between Diane de Poitiers and Catherine de Medicis continues in the gardens. There are large gardens planted by Diane and Catherine, as well as a large maze to explore.

There is also a small farm, vegetable garden, flower garden and carriage house that you can visit. And the Orangerie has a tea room in it, for a quick snack with local specialties like the biscuit sablé after all that visiting!

How to get to Chateau de Chenonceau?

By train, you can take a TGV train from Paris’s Montparnasse station to Tours and then change to TER trains to Chenonceau. When you arrive at Chenonceau, the château is a mere 400m away. The trip is approximately 2h30 minutes.

There are also various tour options leaving from Paris, which will have you there and back in style. The Loire is one of the big French wine regions, so certain tours combine wine-tasting and sightseeing. You can see the tour options here.

It is possible to visit Château de Chenonceau as a day trip from Paris, but there are many other magnificent châteaux in the Loire too. I recommend staying overnight so that you can visit more than one and make the most of your trip. 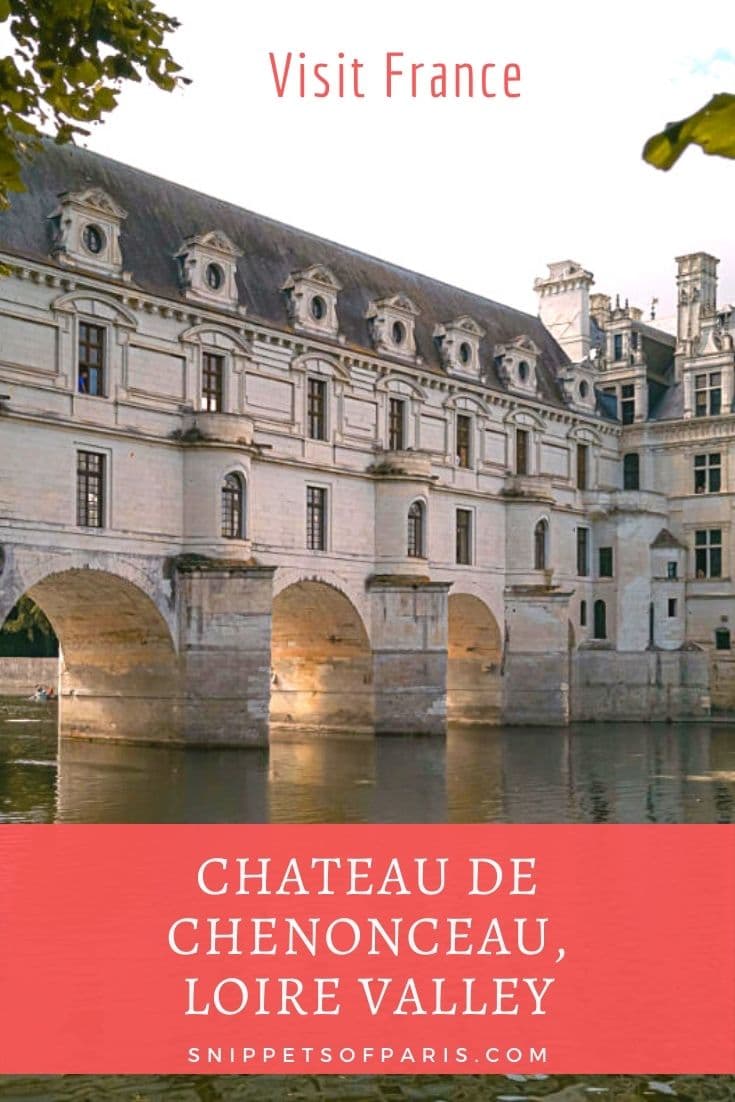 Amboise in the Loire: Royal Châteaux and Leonardo da Vinci!