Skip to content
With discounts up to 20-40% in shop!
Tags: Châteaux
Amboise in the Loire Valley, France is known for its beauty as well as its famous visitors. Get the locals' insight on what to visit, including Château d'Amboise, Leonardo da Vinci's Clos Lucé, and more.
(As an Amazon affiliate, we may earn commissions for certain purchases. Please note, all information is provided for entertainment purposes only. See our disclosure policy for details.)

The city of Amboise was one a royal home. Located near Tours in the Loire Valley, this tiny little town holds a strategic position in between 2 rivers, the Loire and the Amasse, and is one of the top cities for visitors to France.

Because of its vital location in the center of France, the town has seen a lot of history. Everyone from Clovis (one of the first kings of France in the 6th century), to Jeanne d’Arc is believed to have spent some time here.

It was also the home of Ann Boleyn and Mary Queen of Scots who spent time here as children, and Catherine de Medici for a few years. (Obviously, they were not all in here at the same time!)

But today, its most famous resident is the great Italian genius, Leonardo da Vinci. This is where he spent his final years, and he is buried here in a tomb at Chapel Saint-Hubert right next to the Château Royal d’Amboise.

Château d’Amboise didn’t start off as a royal castle. The first castle here was built in the 10th century. After King Charles VII seized the Chatêau from a wayward subject in 1434, the castle became a favorite of French royalty, with each generation adding and modifying the existing castle.

The Château was at the height of its renaissance however, when one of France’s most famous kings, François I, came to the throne. Born in nearby Cognac, he came to the château at 4-years old with his mother Queen Louise of Savoie in the early 16th century.

While François Ier didn’t spend all his time here (he preferred the Châteaux at Fontainebleau, Blois, and Chambord), he did put up Da Vinci at a nearby residence Clos Lucé.

It is said that there was an underground passage between the Château d’Amboise and Clos Lucé for François I to visit his favorite artist as he pleased. (You can read more about the French Royal Family here.)

The castle began to decline after François I, at times becoming a prison, and being confiscated during the French Revolutions of 1789 and 1848.

Today, It is a UNESCO world heritage site, and recognized as a historic monument. Inside of the Château has some objects from the time of François I, but years of plundering have meant that original furnishings are scarce.

The most impressive part of the castle is its 2 towers called Tour des Minimes and Tour Heurtault, which don’t have stairs inside, but instead a gentle slope. Because the castle is built directly on the banks of the Loire river, the gardens of the castle are on a terrace overlooking the quai.

The 2 circular towers have a large entrance directly on the quai where soldiers on horseback and even large carriages can enter mount up to where the garden terrace is. Impressive indeed!

The home where Leonardo da Vinci spent his final years, is a large manoir, called Clos Lucé, about 5 minutes walk from the Château. Today, Clos Lucé has such an extensive exhibition on Da Vinci, that school fieldtrips come from all over France to admire his genius.

Da Vinci moved to France at the age of 64, leaving Italy in exile. He arrived with chests full of notes and sketchbooks, along with 3 of his most famous paintings, the Mona Lisa, Virgin and Child with St. Anne and St. John the Baptist.

François Ier put him up at Clos Lucé and gave him a rich allowance to continue his work. Upon his death 3 years later, his work became the property of the French King, which why many of those famous works are conserved in the Musée du Louvre, with his sketchbooks in vaults owned by the French Govt.

In Clos Lucé, you can see the bedroom where he stayed, where he is believed to have died in the arms of François I. You can also see his office and painting workshop.

But the best parts of Clos Lucé are in the basement and the gardens. Using Da Vinci’s sketchbooks, model replicas of engineering projects have been brought to life. Every nook and cranny of the large garden is covered with his designs that you can touch and admire. A wonderful afternoon for history and engineering buffs.

After all that history, you will want to explore the town itself. The area behind Château d’Amboise (on one side of the Loire river) is pedestrianized, with a few lovely bars and restaurants in the area. With tiny cobblestone streets, this tiny village center is quite delightful.

There are also a handful of artisan shops in the area, and in keeping with the city’s charms, there are no multi-national stores in the area.

4) the Other Châteaux in the Loire Valley

While you are in the area, you have to take advantage to visit the other grand châteaux of the Loire. Just outside of Amboise, is the exquisite Château de Chenonceau. The trip is about 20 minutes by car, and 50 minutes if you rent a bike. (There is no bus option available.)

One of the local specialties in the area is wine, although the wines are not as famous as other French wines.

The Loire Valley mostly produces white wines, but there are some red wiens as well. The area is the second-largest concentration of sparkling-wine producing vines in France after the Champagne region.

Having French royalty like François I and Catherine de Medici nearby as well as the British royals, meant that their courtiers and followers all got used to drinking wines from the Loire Valley, and effectively marketed the wines to other nobles and royals around France and Europe.

There are many wine-tasting tours that will combine with chateaux visits in the Loire Valley.

How to get to Amboise, France?

Amboise is quite accessible from Paris by car and by train. It takes approximately 2h15 to drive from Paris depending on traffic.

By train, you can take a TER train from Paris’s Austerlitz station to Orlèans and then change trains to Amboise. The trip is approximately 2h30 minutes.

You can also take a tour that will have you there and back in style. There are several tours that combine with other châteaux in the area as well as vineyards to make the most of your day. You can see tour options here.

How easy is it to get around?

The city center is very walkable, and indeed, you will likely have to leave your car in a parking lot and walk, as many of the streets are pedestrianized and narrow. You will however need a car/bike to visit Château de Chenonceaux.

I would recommend spending at least 2 nights, even longer if you set the town as your base and the other Châteaux in the area.

The center of Amboise is right next to the Château and only a few minutes’ walk to Clos Lucé, so I recommend staying in the area. There are around a dozen small bars and restaurants in this area for nightlife.

So will you be visiting the Royal city of Amboise? Comment below and let me know. 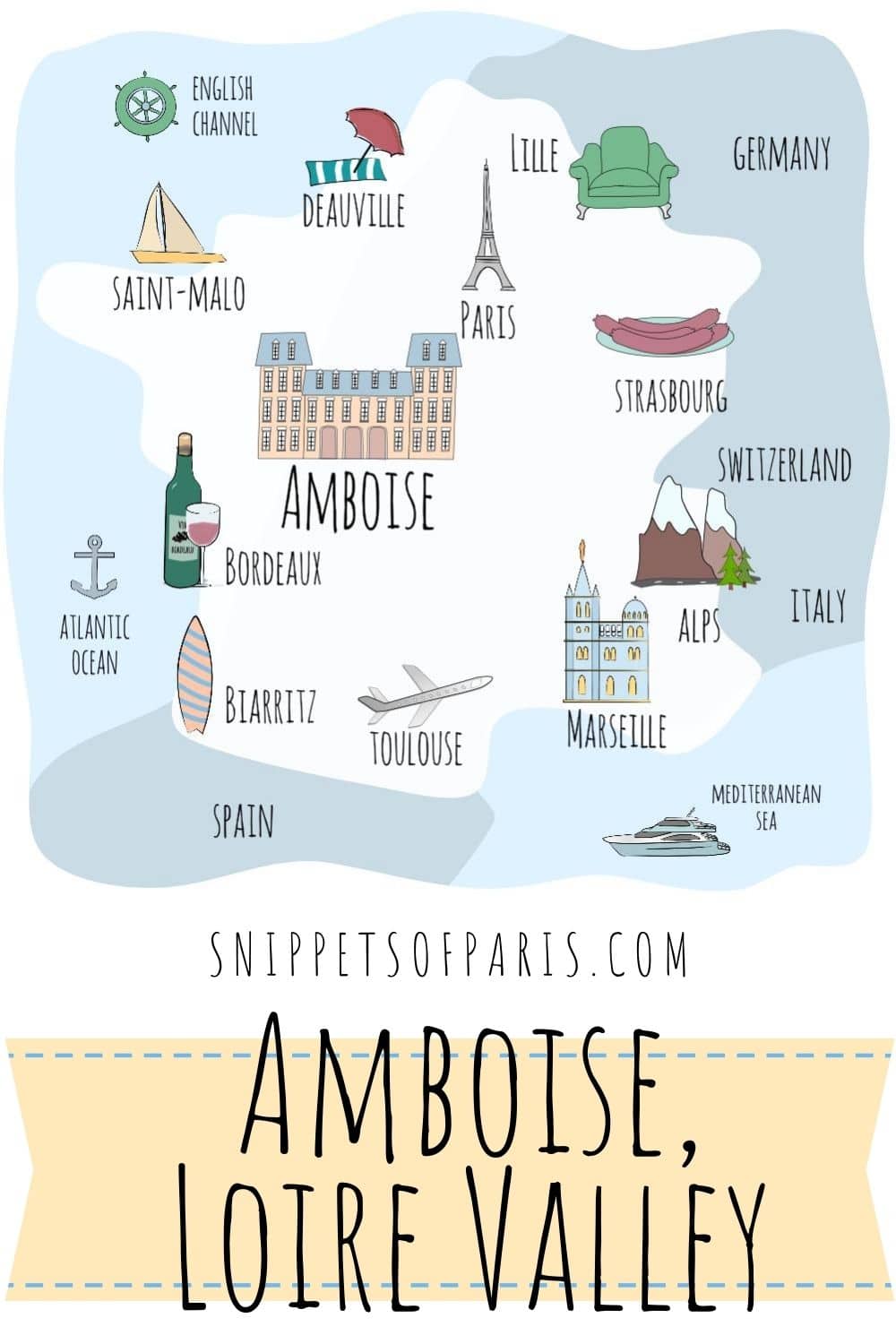