Skip to content
With discounts up to 20-40% in shop!
Tags: Châteaux
Located just outside Paris, Château de Breteuil is strewn with fairytale wax figures, ornate decorations, and puppets. Enough to charm the young and the young at heart.
(As an Amazon affiliate, we may earn commissions for certain purchases. Please note, all information is provided for entertainment purposes only. See our disclosure policy for details.)

Château de Breteuil is not one of those famous castles that are on everybody’s Paris bucket list, like the Palace of Versailles or Château de Fontainebleau. Nonetheless, once you arrive at this exquisite Château and its expansive gardens, you will immediately fall under its charm.

Unlike other castles that just present the property in a rather sterile manner, Château de Breteuil has adopted the theme of fairytales, and put in place several wax figures and puppet shows showing daily life at the castle, as well as reenacting several famous children’s’ stories. If you have small children, a visit to the château is a must.

When I was first planning my visit to the Château, I realized that I had actually already been there for a wedding! Under the starry lights of glittering chandeliers and champagne, I had just forgotten the name!

The Château can be privatized for special events like weddings, conferences, etc. so do look at their schedule online before planning your visit.

History and the Fairytales of Charles Perrault

The name of French author Charles Perrault may not ring a bell, but you have probably heard of his very famous books like:

Charles Perrault worked as a secretary on the premises for Louis de Breteuil, the finance minister of Sun King Louis XIV (who built the Château de Versailles). Some of those very famous tales were actually written right at Breteuil.

Around the castle, you will notice wax figures that were specially commissioned to the Musée Grévin (the French equivalent of Madame Tussauds) to depict these depict historical figures and fairytale characters.

Many members of the Breteuil family served in the Royal courts through the centuries, including Louis Auguste de Breteuil who served Marie Antoinette and Louis XVI during the French Revolution until they were guillotined.

The family lost the castle during the French Revolution, but regained it several years later, and continue to pass it down from generation to generation.

Inside the Château, the tour starts on the ground floor where there are several large salons, and continues upstairs to the private sitting rooms and bedrooms. The tour continues through the kitchens and pantry before leading you back outside. Note, there are many stairs so strollers and wheelchair access is not possible inside the castle.

Along with the castle, there is also an Orangerie on the premises where events are held, as well as a cafeteria, and a small pavilion apartment with 3-bedrooms that is rented out for overnight guests.

More elaborate than the inside of the château (which are already quite impressive), are the gardens. The extensive gardens are broken up into several areas including fountains, a maze, romantic-style garden, grassy parks, a small forest, garden archways, and more.

The old carriage houses in the gardens have also been converted to hold small animated puppet shows featuring the tales of Charles Perrault, to delight your own little prince and princess. (These shows are in French.)

There is also an old tower on castle grounds which has miniatures puppets featuring important events in the castle’s history.

Getting to the Château from Paris

Château de Breteuil is located in the Parisian suburb of the Yvelines, south west of Paris.

By Public Transportation: The Château is not the easiest to get to on public transportation, but it is possible. You can take RER B from RER B from Châtelet or Gare du Nord up to Saint-Rémy-lès-Chevreuse station, and from there catch the Baladobus.

The Baladobus is a tourist bus that visits several major attractions in the area, including the Château de Breteuil, Château de la Madeleine, and more.

By Car: Château de Breteuil is easily accessible by car by Paris. It takes around 40 minutes, depending on where you are coming from within Paris.

Will you be putting Château de Breteuil on you Paris Bucket List? You can find more day trip ideas from Paris here. 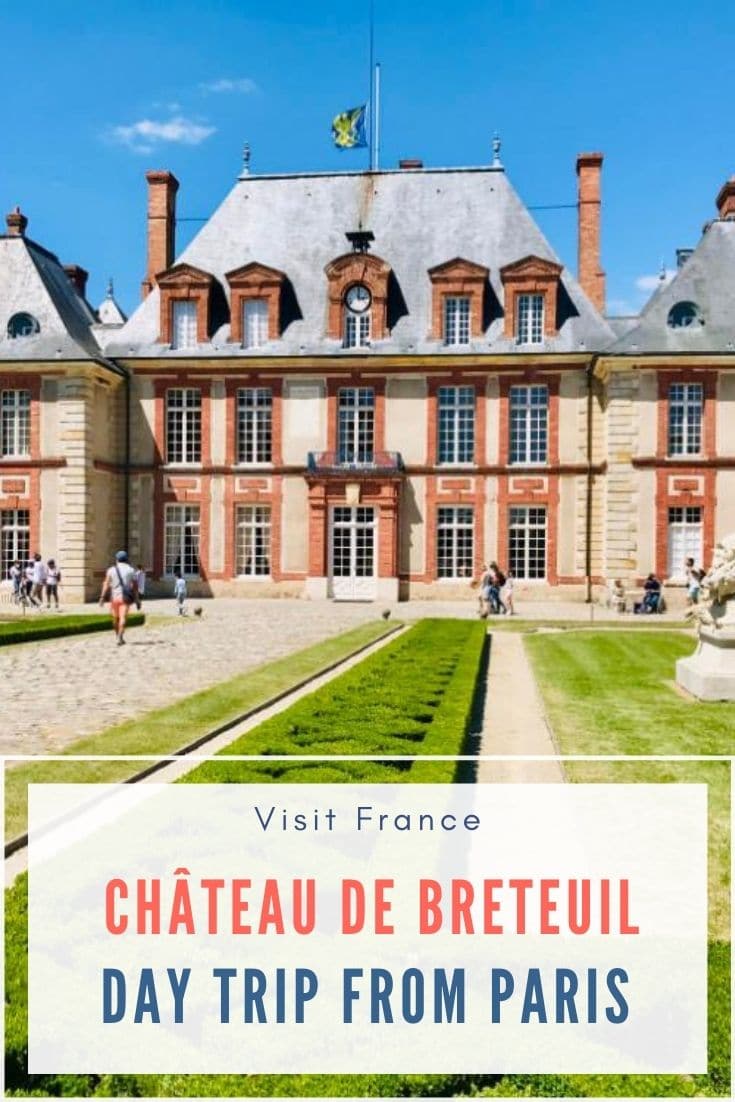 Explore the Marais in Paris