Skip to content
With discounts up to 20-40% in shop!
Paris is not known for its baby-friendliness so if you are visiting with kids, you need a plan. Get the locals' guide on the best things to do in Paris with kids and what to avoid.
(As an Amazon affiliate, we may earn commissions for certain purchases. Please note, all information is provided for entertainment purposes only. See our disclosure policy for details.)

When you think about Paris, that romantic vision of the City of Lights doesn’t usually involve your children tagging along. Paris is supposed to be that perfect place to propose, a honeymoon destination, a romantic trip for two, and all that mushy lovey-dovey stuff. Never fear though, Paris with kids is just as enthralling, albeit in a slightly different way.

As long as you base yourself in the center of Paris and know how to get around the city (without taking the stroller-catastrophic metro, more on this later), Paris is a wonderful place to visit with the children.

The city is very compact and the major attractions are easily walkable from one to another, compared to other major cities like London or New York.

There are a lot of attractions across Paris that will fascinate both adults and children and plenty of things to do and see for the full family. So pack your bags, load up the kids, and let’s go visit Paris!

As I mentioned before, the Parisian metro is not known for its stroller-friendliness. So it doesn’t get much easier than an open-top bus crisscrossing the city, with a helpful guided commentary pointing out the sights in your ear.

These hop-on-hop-off buses are the perfect way to get around Paris with the kids. With several routes, you can decide where you want to stop and where you simply want to wave bonjour.

2. Picnic at the feet of the Eiffel Tower

You could brave the crowds and climb up the Eiffel Tower, but why not have a classic Parisian picnic at the foot of the tower instead?

Visit your nearest French grocery store and pick up a few supplies for that a perfect French picnic. Look for the large grassy area near Trocadero or on the other side at Champs de Mars right at the base of the tower, and settle in a for a lazy couple of hours people watching while the kids run loose.

If you want to take your picnic up a notch, you can also book a guided visit a local market who will take you on a tour and equip you with everything you need.

3. Ride the different carousels in Paris

You can’t miss seeing them all over Paris, the elaborate gold-gilded carousels (merry-go-rounds) for kids that seem to be sprinkled across the city. The horses in the carousel were inspired by the Royal Grand carousel celebrated by Sun King Louis XIV upon the birth of his son.

Jousting tournaments had been banned 100 years earlier by Catherine de Medici after the accidental death of her husband, King Henry II. The Sun King Louis XIV adopted the Italian tradition of the horse carousel which was actually a pageant of live horses parading about in a grand spectacle.

The location of the Sun King’s Grand Carrousel in front of the Louvre Palace is today called the Place du Carrousel, (although sadly there is no merry-go-round there today).

4. Boat on the Seine River

Those little legs get tired so why not take a cruise on the Seine river. Leaving from the Port de Conference near Pont d’Alma, the boat travels up the Seine river up to Bastille and then does a u-turn, going past the Eiffel Tower before heading back.

If you are really lucky, the tide will be low enough for the boat to also pass by Paris’s mini Statue of Liberty.

The tour lasts around 1 hour and 10 minutes, perfect to hold everyone’s attention.

5. Head over to Disneyland Paris

Unless you live in Florida or California next to a Disney theme park, Disney should probably be somewhere on your list of things to do in Paris with kids. A 30-minute RER train from the center of Paris will take you to Mickey’s doorstep.

Disneyland Paris actually is much cheaper, compared to other Disneylands in the U.S., Japan, and elsewhere. The park is split into two parts: Disneyland Park and Walt Disney Studios and you can buy tickets for both parks, or just one.

For accomodation, you can also stay at the nearby Center Parcs that has partnered with Disney to make the most of your holiday.

About 500 meters (1/3 mile) from the foot of the Eiffel tower is the Aquarium de Paris. The entrance is slightly hidden because the aquarium itself is underground, but if you ask someone, you should easily be able to find it.

Built underground, the aquarium was constructed at the same time as the Eiffel Tower in 1867. After a massive 21-year renovation in 2006, the Aquarium covers an area of 3.5km and houses over 10,000 different species of fish.

Giant shark tanks, alien-like octopuses, little seahorses, there are a wide variety of sea creatures to look in awe at. And if your little ones like getting their hands wet, there is even a touch pool. There are also drawing and art workshops for children, although those will be organized in French.

7. Take the Train in Montmartre

The village of Montmartre in Paris has plenty of charm, but also a lot of hills and staircases. So to enchant the little ones, take the Petit train de Montmartre for a guided tour of the neighborhood, from Moulin Rouge and Place du Tertre to the famous Sacre Coeur Cathedral. Kids under 2 years old are free on the train.

If Disney is too “American” for you, why not take the kids to the French version, Parc Asterix? The theme park features the intrepid Gauls (as the French were called then) and their fight against the dastardly Roman Empire.

Based on the French comic books, Asterix, Obelix, and their friends roam around the theme park, ready to greet visitors while they ride various rollercoasters and merry-go-rounds. Combining history and kitsch, the park is divided into areas featuring the land of the Gauls, ancient Egypt, the Roman empire, and more.

About 30 minutes outside of Paris, you have to catch a shuttle or hire a private car to get there.

Even little ones will enjoy a bit of culture at the Musée de l’Orangerie. Right next to the Place de la Concorde is this tiny Impressionists’ museum that is perfect for little feet. Featuring the famous floor to ceiling paintings of waterlilies by Claude Monet as well as Renoir, Matisse, Cezanne, Gaughin and more, this is a museum that parents will enjoy as well. Children under 18 are free.

If you don’t want to invest the full day at Disney or Parc Asterix, but still want to entertain the kids with a few rides, you can head out to Jardin d’Acclimatation.

The park has over 40 rides, as well as a small aviary and jungle gyms. Set in the Bois de Boulogne, the Jardin is next to the Louis Vuitton Foundation art museum, if you would like to combine the two. A lot of the rides are for the toddler crowd, compared to Disney and Parc Asterix which are for older children.

Getting there is easy as well, it is just off of Line 1 on the Paris Metro, about 15 minutes bus or metro ride from the Champs Elysées and the Arc de Triomphe.

11. Go on a chocolate tasting

Walk around the elegant 6th arrondissement on the Left Bank and visit the best chocolate shops in the area. Along with your guide, try different types of traditional French sweets such as the choquette, calissons, macarons and mousses.

If you are more of Right Bank type of person, you can opt for a chocolate treasure hunt in the Marais (4th arrondissement). The first one to find all the delicacies wins!

If you are not eager to visit a theme park and are keen for some green, head over Jardin du Luxembourg, aka Paris’s backyard. This grand garden in the heart of the Left bank has ambling boulevards of trees and relaxing lounge chairs to enjoy, while your little ones watch toy sailboats.

A lovely oasis from the hustle and bustle of Paris.

13. Have a goûter at Angelina’s

French children live by their afternoon goûter (4pm snack), so treat your kids to one as well. Order a delicious éclair along with some hot chocolate for the kids, while you luxuriate with a café gourmand.

14. Become royalty at the Palace of Versailles

Dress the kids up in their favorite Disney prince and princess outfits and take them to the fantabulous Palace of Versailles. (Bring your own costume because I’m actually not kidding, you will regularly see kids dressed up when visiting the château.)

Visiting the home of Queen Marie Antoinette may sound daunting with children, but you will not regret it once you make the trip. The tour inside covers the Hall of Mirrors, the luxurious bedrooms, and other elaborately decorated state rooms. Once you leave the Palace, there are expansive gardens, several tea rooms, as well as a Grand canal that you can go boating on.

Strollers and baby carriers with a metal frame are not allowed in the Palace rooms, but there is a luggage desk where you can leave larger items. It is advisable to bring a sling or baby carrier without a metal frame.

Note: The Palace of Versailles gets very busy, especially in the high summer season.

15. Pose with the Statues at Musée Rodin

If you aren’t planning on visiting the statue gallery at the Louvre Museum, then the Musée Rodin is your next best bet. The museum has two sites, the palatial mansion “Hôtel Biron” in central Paris, as well as Rodin’s own home in the Parisian suburb of Meudon.

The museum within Paris has a series of galleries filled with statues, but more importantly, it has a sculpture garden where you can let the kids roam freely. Children under 18 are free into the museum.

16. Play pétanque on the quay at Canal d’Ourcq

If you are tired of all that culture, and are looking for a slice of Parisian life, head over to the Canal D’Ourcq in the north of Paris. Lined with tiny cafés, you can easily spend a few hours here paddle-boating or playing pétanque.

A few of the nearby restaurants rent pétanque balls if you order a beer, so join the locals and spend a relaxing couple of hours en famille. This is life in Paris, so enjoy! 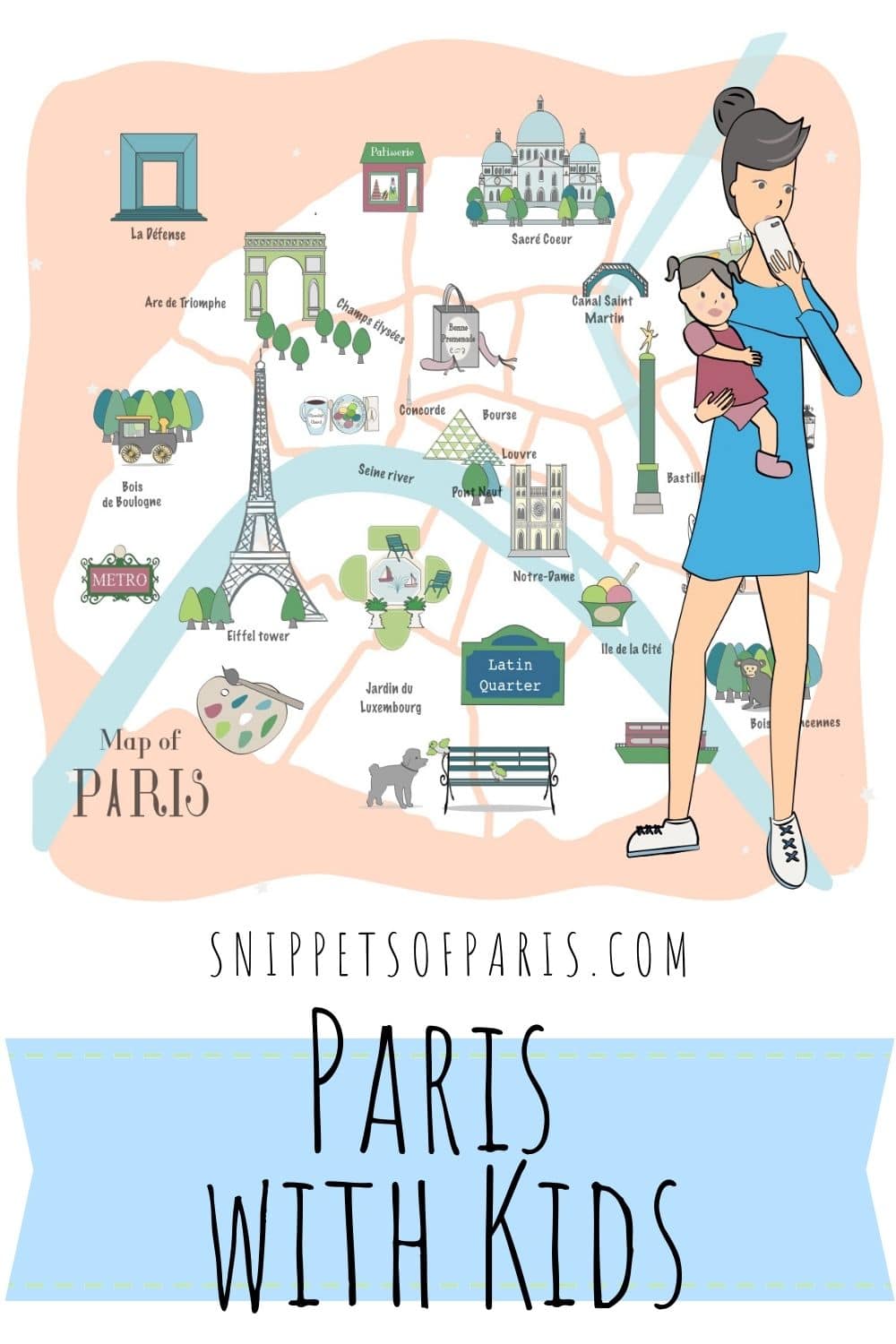