Skip to content
With discounts up to 20-40% in shop!
Parc Asterix located just outside Paris has a lot going for it. Based on the famous comic books, this French amusement park is more than ready to go toe-to-toe with Disney. Read our review of the attractions and get tips for your day with Asterix, Obelix, and the rest of the gang.
(As an Amazon affiliate, we may earn commissions for certain purchases. Please note, all information is provided for entertainment purposes only. See our disclosure policy for details.)

Even if you’ve never read the comic books, you will still be swept away into the world of Asterix and Obelix, the mighty little Gauls fighting the evil Roman Empire.

Parc Asterix, the French theme park just outside of Paris, is ready to transport you into another time. This guide will cover if it is worth the visit, how it compares to Disneyland Paris, how to get there as well as my top tips for visiting.

French children grow up devouring this comic, so it stands to reason that there is a theme park dedicated to Asterix & Obelix about 40 km (22 miles) north of Paris. The comic by René Goscinny and Albert Uderzo, which has been enchanting readers since 1959.

The story is set at the time when France was invaded by the Roman Empire (1st Century BC to 5AD). At the time France as called La Gaule and the people here were referred to Les Gaulois.

If you tour around Paris’s Left Bank or around the South of France, you will see one Roman monument after another. It is in this era that the comic books are set.

Fun Fact: Today in French we call “Pays des Galles” or Country of the Galles, to refer to another country: Wales.

Julius Caesar and Cleopatra are on the throne (hence the statues of them all over park) and the people of the village that Asterix lives in are cheerfully trying to continue their way of life.

To keep the Romans at bay, The old druid Panoramix (Getafix in the English version) creates a magical potion. If the Romans get too aggressive, Asterix drinks the potion, becomes super-strong and puts them back into their place.

With his little dog with his friend Obelix, who fell in the magic potion as a baby, Asterix continues on this merry adventures to this day.

Fun Conspiracy Theory: It would seem that Charles de Gaulle (i.e. Charles of Old France), had a very patriotic name as he was leading the French Resistance against the Germans in World War II. In the words of Shakespeare, would a rose by any other name smell as sweet?

Parc Astérix itself has 7 sections:

There is a bit of everything for everyone at this park. I have been several times, with a group of adults, with 2 babies, and now 2 toddlers. There are enough rides sufficiently slow, or sufficiently fast, to make a great day out.

There are also several large restaurants with a good variety of food offerings, including a buffet at La Cirque if that is what you enjoy.

Download the app to keep up-to-date on how long the queues are, the food choices and more.

Since the story of the comics is based in France, Parc Asterix is a more authentically local theme park. As soon as you arrive, traditional music from Breton greets you as you enter.

Compared to Disneyland Paris, there is no Mickey or Minnie dressed up (or heaven forbid the princesses), but there is a booth in the Gaulois village where you can take pictures with Asterix, Obelix, or whoever else is manning the booth that hour. The characters are a lot more accessible, rather than the “Hollywood star Mickey”. (I love Mickey, I’m just saying you can never get a picture alone with him unless you are prepared to queue for an hour and/or elbow some small child out of the way!)

You can read more about visiting Disneyland Paris here.

Tips on Visiting and FAQ

Is it worth visiting?

Yes, if you like theme parks and are looking for a bit of French culture (and childhood), then you will enjoy this theme park. If you have already been to any of the Disney theme parks, in the U.S. or around the world, I would definitely recommend visiting Parc Asterix instead.

Is it child and baby-friendly?

Yes, I didn’t have any trouble finding baby change tables and strollers are fine inside the park. Unless it is an expensive stroller, most people will leave them just outside each ride entrance as you hop on each ride. Just don’t leave anything valuable in there.

Unlike Disney or Jardin d’Acclimatation, Parc Asterix is not open all year round. It is only open every day from June to August. At other times of the year the park is closed on Mondays and Tuesdays, or not open at all.

Check the agenda carefully, as there are many days in the off-season when the park is not open.

Note: Parc Asterix is open the week of Christmas if you want to celebrate the holidays Gaullois style.

How to get there?

Bus: The easiest way to get to Parc Asterix is by catching a Flixbux or Ouibus bus from the Louvre museum‘s underground parking. They leave early in the morning and return around 6pm.
RER train: Take RER line B from Paris Gare du Nord. Get off at the stop “Aéroport Charles de Gaulle 1”. Head to the “Parc de Loisirs” desk where you will be directed to Parc Astérix shuttles (30 minutes between each shuttle).
Car: You can also rent a car to visit, Parc Asterix has a large parking lot attached.
Tours: There are several tour companies offering private transfers to and from the Park.

If you enjoyed that article, you may want to read more about other day trips from Paris. A bientôt! 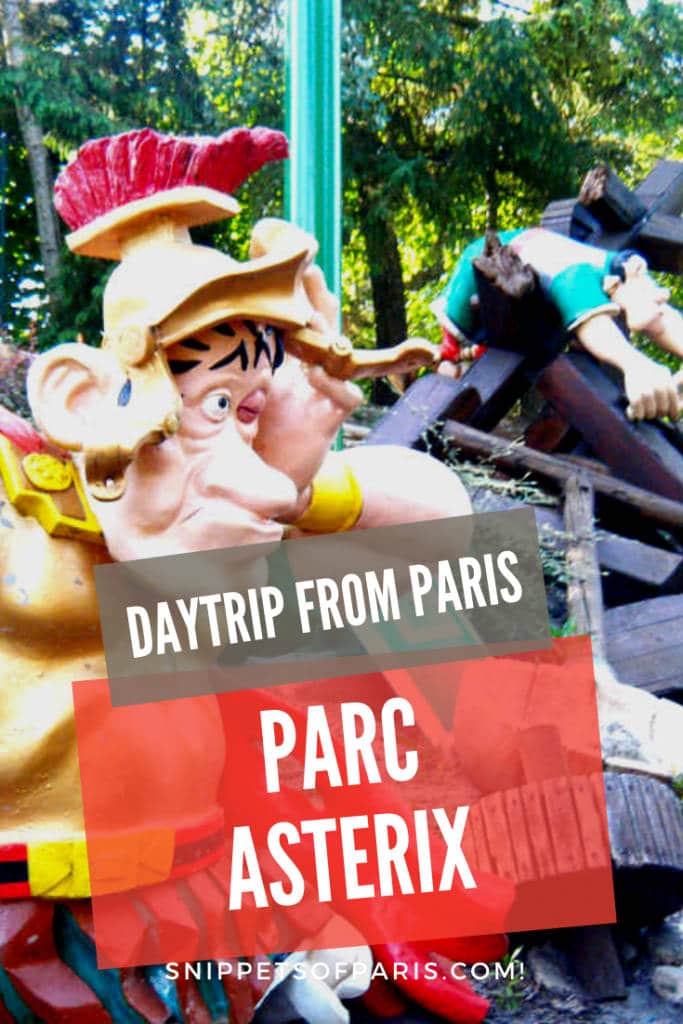 Childcare in France: From Nannies to Nurseries