Skip to content
HOLIDAYS ORDERS! GET 15% OFF IN SHOP WITH CODE CYBERMONDAY

If you have ever dreamt of traveling all over France, the France Miniature theme park outside of Paris is a great place to start. The most beautiful French cities, attractions all monuments, all replicated and miniaturized to 1/30th the size.

France Miniature, which first opened in 1991, is the biggest miniature park of its kind in France and Europe, spanning over 5 hectares. Small buildings built with care, with tiny details that have been exquisitely added to make you feel like you are looking at the real thing. A perfect dollhouse-type reproduction of France.

If you are going with small kids, your biggest problem here will be trying to stop them from touching anything, because they really will be tempted (as will you!)

Walking through the park, you are not just wandering about, running into random monuments like Mont Saint Michel in Normandy next to Notre Dame de la Garde in Marseille.

Instead, the park follows the map of France. With around 120 installations, the park has been laid out with cities, mountains, forests, villages, rivers, and the sea exactly where they ought to be.

There are also miniaturized train tracks, with puppets and electronic trains running through the park as the real high-speed TGV trains would. All in all, it is quite a sight!

But what is most interesting about the themepark is not the Eiffel Tower and other monuments that you would visit in nearby Paris anyway. It is those hidden gems, like Pont du Gard in Provence, that we normally don’t go out of our way to see.

For example, here is the town of St. Emilion near Bordeaux, which is famous for its wine. Who knew that it was so charming-looking as well?

Along with the monument attractions, France Miniature also has a few rides and activities for kids. There are not the usual theme park rollercoasters like at Parc Asterix, Disney and Jardin d’Acclimation, but things like waterslides and tree-climbing accrobranche with harnesses. There is also a speedboat ride that is quite fun.

How to get there?

France Miniature is in the Yvelines, a southwest suburb of Paris. To give you an idea, it is approximately 15 minutes by car from the Palace of Versailles.

By Car: If you are coming by car from Paris, it takes about 40min to get there, depending on where you are in Paris.

By Train: From Paris, take the TER or Transilien train from Montparnasse station in the direction of Rambouillet, and get down at Gare de la Verrière.

There is one large restaurant in France Miniature, with a 2nd one soon opening. The park is quite a busy tourist attraction for French locals, so I would recommend heading to the restaurant early to get a good table.

The park is quite large so a good pair of walking shoes is a must. Several of the attractions such as those in the “French Alps” are up small hills. We found it quite accessible though, for strollers or wheelchairs.

If you are going in the summer months and are sun-sensitive, I highly recommend bringing a hat. Since the park has to follow the topography of France, around the attractions there are not a lot of trees for shade.

Will you be going on a day trip to France Miniature, the next time you are in Paris? You can find more day trip ideas from Paris here. 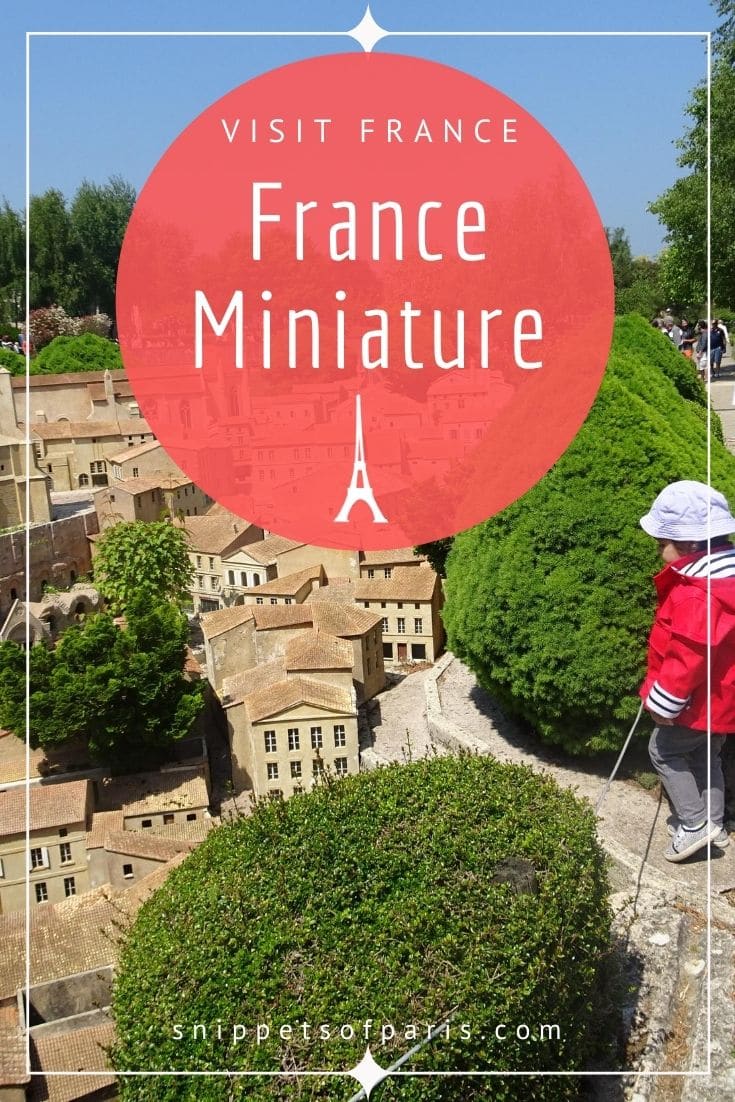 The 20 Paris Arrondissements: Where to stay (Quick Guide)

Wondering what life in France is really like? After living here for the past 10 years, I can tell you all about it! There’s more to Paris than the headlines and those oh-so-perfect photos on Instagram. Go behind closed doors for fun anecdotes as well as the unvarnished truth on those intriguing French habits 😉