Skip to content
With discounts up to 20-40% in shop!
France may be a secular country, but certain Christian traditions are still widely carried on. Learn how French people get together to celebrate 3 Kings Day. Hint: there is cake.
(As an Amazon affiliate, we may earn commissions for certain purchases. Please note, all information is provided for entertainment purposes only. See our disclosure policy for details.)

It’s the Jour de l’Epiphanie! Otherwise known as 3 Kings Day! Time for some cake! Or a pastry type dessert, known as a galette de roi, if you want to get specific. It is a type of pancake made from pastry that has been browned in the oven. It is sometimes filled with frangipane, fruit compote, or butter cream.

France may be a secular country, but certain Christian traditions are still widely carried on.

Jour de l’Epiphanie in France and around the world

Three Kings Day, as it is called in English, is inspired by the 3 kings who were traditionally supposed to have visited the baby Jesus with gifts, a few days after he was born. (Not sure they brought cake for the baby though!)

In certain cultures, it can be a national holiday. For families in Spain and Latin America, small children who leave their shoes out to receive gifts. Large parades and performances are held, with hearty portions of Roscones de Reyes “Kings cake” being distributed. The recipe is different from the French galette de roi, but the sentiment is the same.

Some families leave a box of grass and water for the 3 King’s camels, similar to the North American tradition of leaving out cookies and milk for Santa.

It is not a national holiday in France, but it is rather a big deal in offices and schools around France. And by big deal, I mean a big reason to eat cake. It is one day of the year when someone brings in a galette de roi, and everyone pigs out.

The traditional cake is made of pâte feuilletté and filled with almond cream to resemble a pastry like this:

In the south of France however, there is a 2nd type of cake that looks like a brioche (unsweet cake) and is topped with confit de fruits.

The day of Epiphany usually falls in the 2nd week in January, when schools reopen after the Christmas holidays and everyone is back at work. The perfect reason for a moment of conviviality and to moan about how much they ate over the holidays, while eating a slice of frangipane cake. Adults are usually served a glass of cider, while children might be served a juice.

The traditional time to serve the galette de roi is not during lunch or dinner, but the 4pm afternoon snack time known as the “goûter”. Normally French adults don’t indulge in a goûter (unlike kids), but they make an exception in offices across France, for 3 Kings Day. This perhaps adds to the feeling of conviviality, going back to childhood days.

Over the years, there has been a debate (link in french) about whether or not it is religious, or more just an occasion to mark the Winter Solstice. France today is very multicultural, especially in the larger cities, such as Paris and Marseille. People of different religions may feel uncomfortable about celebrating such a Christian holiday.

In my experience in Paris however, I’ve never noticed any religious connotations either in schools or in offices when the cake is brought out. People who are gluten-free however, may feel very uncomfortable!

And there’s a bit of competition involved. A tiny figurine called a feuve is hidden by the baker within the galette de roi (can anyone say, “choking hazard?”), and the person who finds it is crowned King or Queen for the day.

To make sure things are fair, if there are small children, the youngest child gets to hide under the table and announce randomly who gets the next slice. Or as randomly as a child is inclined to be.

The tradition dates back to the Middle Ages, when the person crowned King/Queen actually had to pay a round of drinks at the table. If you were poor and couldn’t afford a round, you always had the choice of swallowing your feuve.

These days no such sacrifices are necessary. The winner just gets a paper crown and gets to wear it around the office. Win!

If you are at home though, and have more than one child, I recommend getting more than one cake. This way there is no battle for that crown. Double win!

So are you ready to duke it out for the feuve? If you enjoyed this article, you may wish to read about other quirky French celebrations. 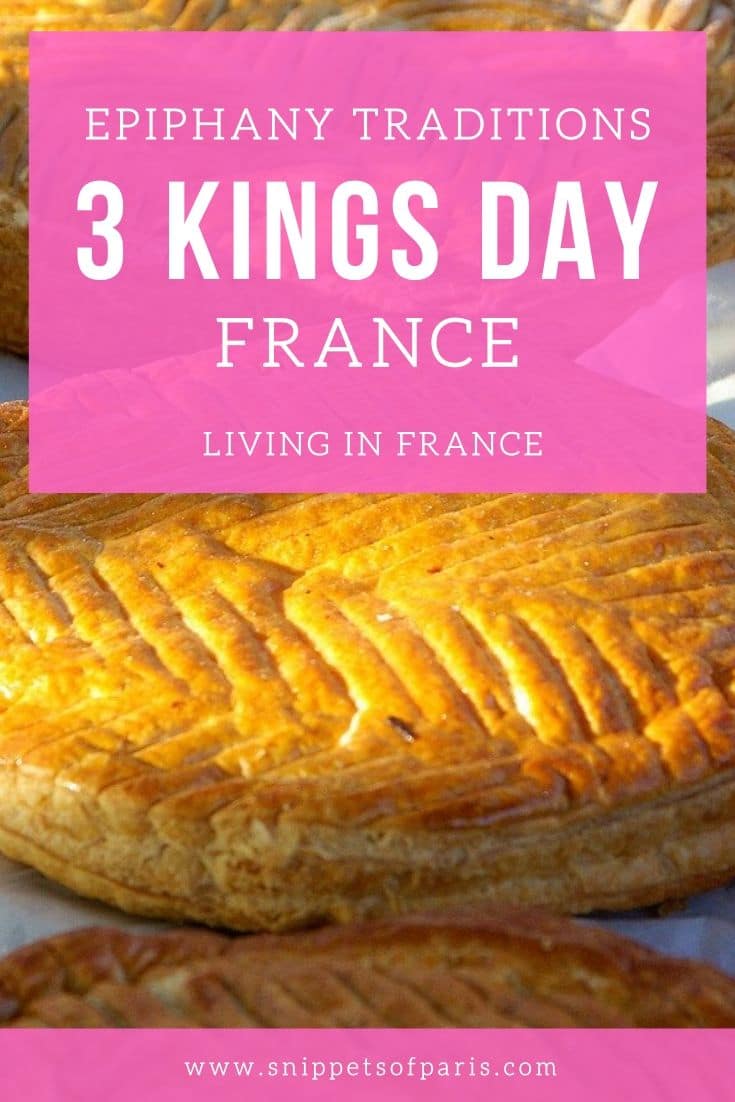 The Unbelievable History of Halloween in France (and All Saints Day!)